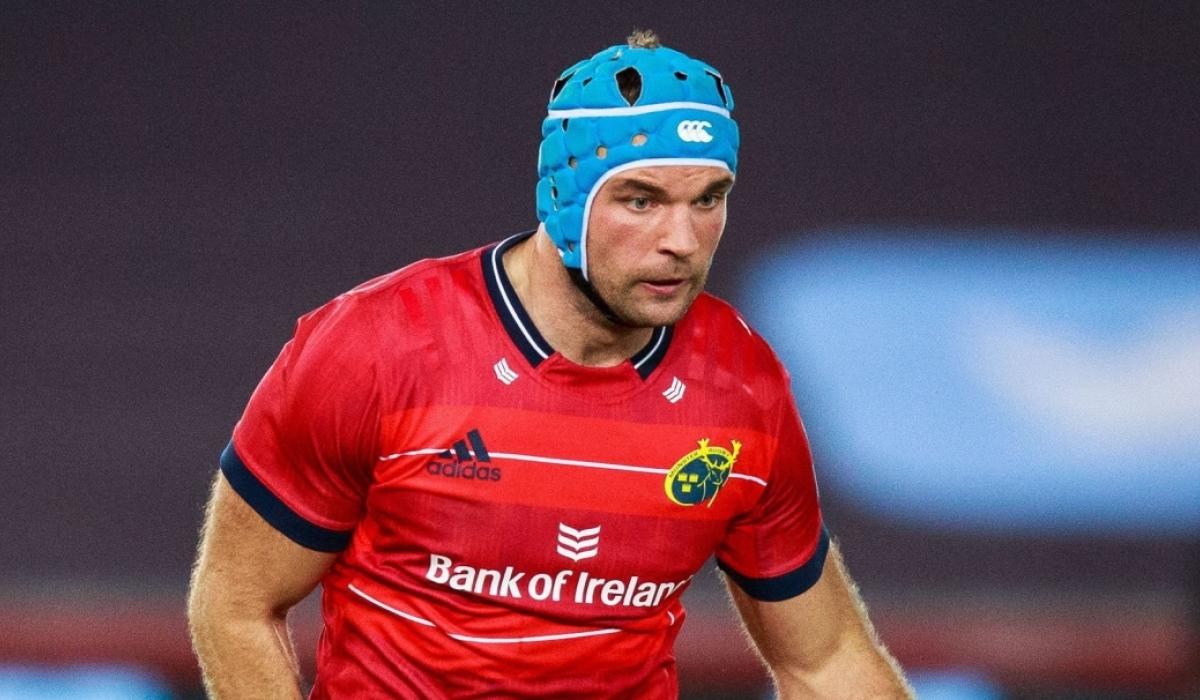 Building a new attacking framework and philosophy is never easy. It can be liberating, it can be exciting, it can even be cathartic but easy? It just doesn’t work that way. It takes time, repetition and FUF (f**k up fear) to properly bed into the minds of everyone. It’s not enough for one guy to know the system, or five guys, or even 15 guys – it’s got to be all 45 squad members, up and down the depth charts.

What Graham Rowntree and his new coaching staff are trying to implement at Munster will not be done easily or quickly and, along the way, there will be games quite like last week’s game against Cardiff where it seems like very little goes right.

At the same time, there were moments last week that was unlike anything that Munster has produced in the previous three seasons. Here’s a quick and sleazy number for you – last season Munster beat an average of 14 defenders per game in the URC across 18 regular season games and one playoff. Against a very strong Cardiff side away from home, Munster beat 23 defenders. It’s just one game, yes, but it’s significantly above last season’s average. Of course, we can’t separate this from Munster’s poor performance at the breakdown which undid most of the good work beating defenders does in the first place, but it’s not nothing. Whether it’s something really depends on this weekend.

There will be patience for Munster this season because, on the whole, I think most people understand that any change worth implementing takes time but there has to be incremental growth, too. Away to a Dragons side who have a similar level of breakdown threat to Cardiff, that creates the real potential for damaging banana peel if the issues that plagued last week’s defeat – handling errors and getting washed at the breakdown – are still present this weekend in Newport. 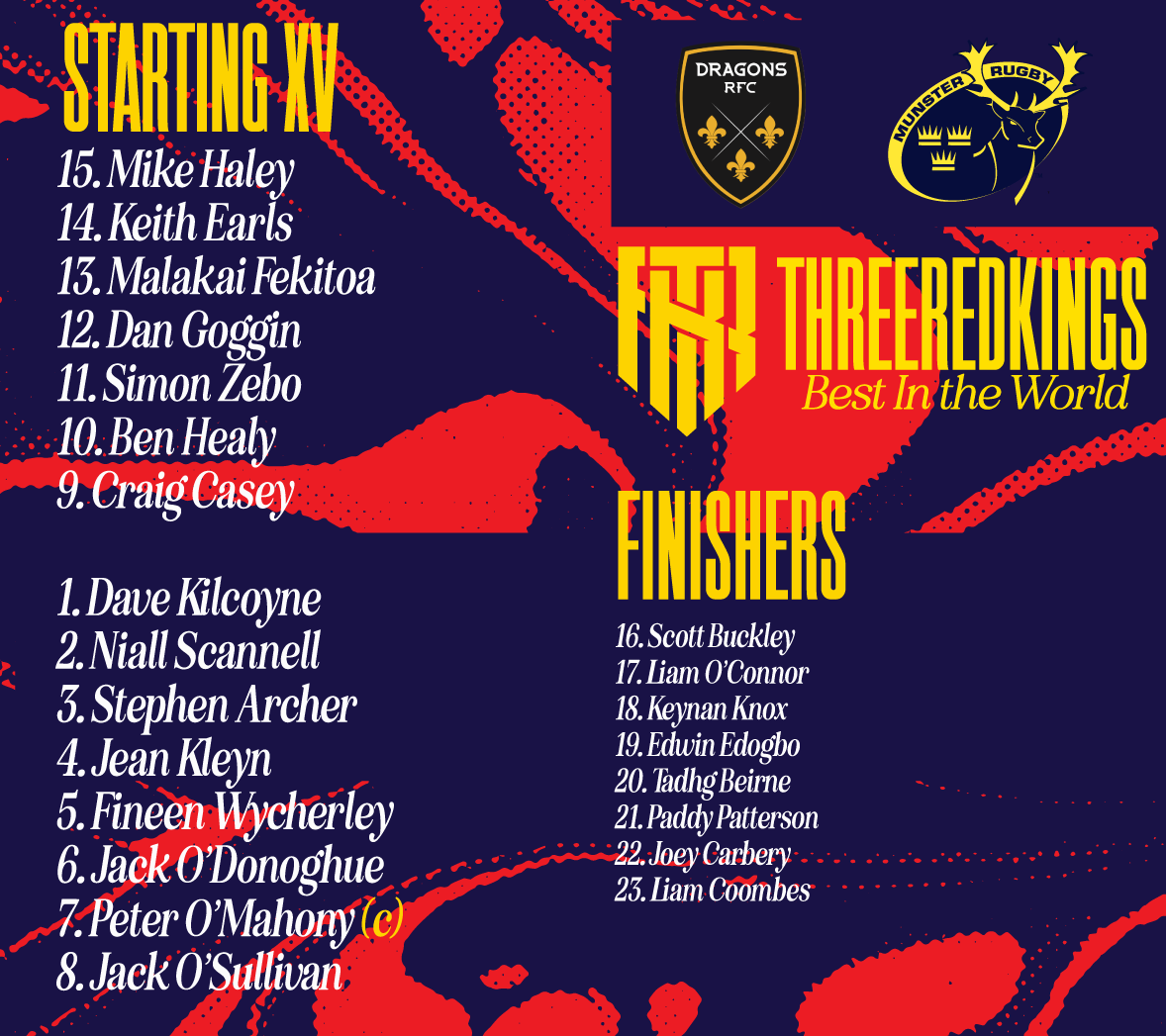 The presence of Peter O’Mahony and Tadhg Beirne – off the bench – should improve Munster’s breakdown work but the intelligence gathered during last week’s defeat to Cardiff should help too. Essentially, because we know last week happened the way it did, it should forewarn us for this week. Earlier this week, Andi Kyriacou spoke about how the coaching staff were directly addressing the breakdown during a specific session before the press conference so it’s plainly been a big target for Munster. It couldn’t be anything but with the amount of possession lost directly to that area of the game against Cardiff.

Dragons are in turmoil at the moment but they have a good set of poachers and counter-ruck threats in their pack – Taine Basham in particular. Basham made 10 turnovers last season and, while they are without Ollie Griffiths (fifth highest number of turnovers won last season for the Dragons), they have a pretty good balance between stoppers like Moriarty, Rowlands and Roberts, and guys like Basham who can be a threat all over the pitch.

For Munster, it isn’t so simple as just being better at the breakdown. That’s almost too obvious. Of course, we’ll have to be better. But to be better at the breakdown, we have to use our forward assets better. In this game – especially a 3-3-1 structure – your pass choice is your breakdown. They are one and the same. This puts a tonne of responsibility on your primary playmaker to ensure a balance between using their back division and setting a platform with the forwards. A 3-3-1 shape is different from a 3-2-X in that passing to that middle forward pod is slightly different for the primary playmaker because the depth the forwards attack from is shallower in a 3-3-1.

The 3-2-X allows you to “bail out” more to the middle pod of two because a 3-2-X integrates forwards and backs in the middle to wider channels. A similar pass to a 3-3-1 is going to be “flatter” and more difficult, especially when you’re not committing inside defenders, because the killer pass to the outside pod runner is more difficult. You will often find that a 3-3-1 system has far more “backs passing to backs” action than a 3-2-X system because it’s less integrated. In this system, you have five primary groups – First Pod of Three, Middle Pod of Three, Openside Edge Runner, Blind Edge Runner and Backs.

The backs are expected to operate as a wholly independent unit that can carry, pass AND cleanout any rucks that arise as a result of those carries and passes. So, in a 3-3-1 system, you will see the primary handler passing to their outside backs more often than you do in a 3-2-X and each passing choice has a consequence. When you pass to the backline, you get width and space at the risk of a poorly resourced ruck.

When you pass to the middle pod of forwards you get a more difficult pass but you send more forwards into a part of the field that isn’t as heavily defended.

We can actually map what those choices were against Cardiff for both of the primary playmakers during that game.

Here’s Ben Healy’s chart for his 54 minutes on the field.

What does this show us? That Healy used his forwards six times in the “link” position between the ruck and the pod outside him. None of those carrying choices resulted in dramatic advancement in territory but they did maintain possession on those phases.

Healy’s most popular pass target was Malakai Fekitoa at #12. Passing to Fekitoa resulted in Healy’s biggest metre gained/possession retained score of the game with this pass to Fekitoa on a counter-transition set 28 minutes into the first half.

It’s a good pass choice and a great execution by Fekitoa to beat the defender, advance deep into Cardiff territory and get the pass away to Patterson.

We should have scored on that break – and would have, if not for an off-the-ball tackle by Llewellyn on Healy – but it’s a good example of a primary handler making a good decision in the moment and getting a tangible reward on the same phase.

A lot of these pass choices are “safe”, though. That doesn’t mean an easy pass because some of these pass options were quite difficult from a range perspective, but it does mean that it was a pass that lead to an obvious target because Healy never established a carrying threat of his own. He carried the ball twice during his time on the field for a +6m gain. Without that threat, Healy became a little too reliant on Fekitoa as an outlet and failed to generate a tonne of Metres Gained Post Pass.

When we look at Crowley’s pass choices during his 26 minutes on the field, we see a different approach. 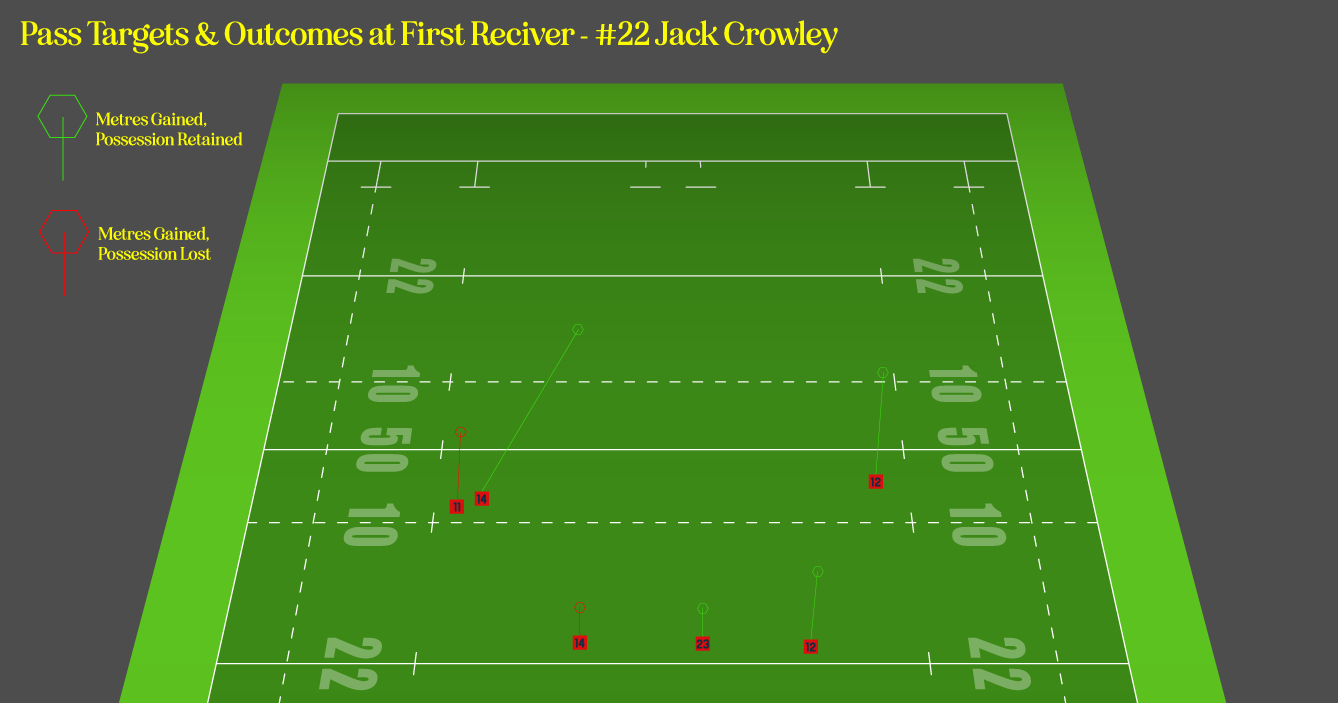 First up; no passes to forwards during his time on the field and most of his pass action happens in the Munster half of the field, which reflects the territory balance at that stage in the game. Thirteen minutes of Crowley’s 26 minutes on the field were eaten up by Cardiff possession, so the 13 minutes we did see featured some fairly high-risk option taking, especially as Munster were losing for 22 of those minutes.

In that context, we would expect more high-risk action from the primary handler and Crowley certainly did that. He was more balanced with his pass targets and, if there were better decisions and execution from Patterson on at least one of these passes, there could have been three scoring progressions.

At the same time, however, Crowley’s own rejection of the middle pod of three forwards in this instance created the lost breakdown.

Crowley created more Metres Gained Post Pass during his time on the field with far fewer offensive minutes to work with. At the same time, I felt both flyhalves could have used that middle pod of three a little bit more and, certainly during Healy’s 54 minutes, we overused Fekitoa as an option.

That’s a key point for Healy this week – he needs to generate some of his own offence directly by using a carrying threat off the screen or in the link position. If he can do that, he’ll create space for Goggin to pop up for some good offensive involvements. Not as much as Fekitoa did last week I would wager – he had 23 offensive involvements across the 80 minutes – but Goggin should get enough to facilitate Fekitoa’s move to outside centre where, if he can get even half the involvements, he will score tries and create linebreaks that lead to scoring opportunities.

That’s the challenge for Healy. He’ll be helped by having Casey at #9 who can provide most of Patterson’s pace but, more importantly, much better pass quality and decision making. That will give Healy a bit of space but he has to balance his urge to pass with enough of his own carrying threat to open up opportunities for others. It seems counter-intuitive but I think until Healy gets his own carrying game together, he will always look like he’s a second late and a euro short in this system.

Carbery, too, will have to find that balance off the bench and should be experienced enough to know that the middle pod can and must be used, as well as generating his own offence with the ball in hand.

If Munster can get that balance right, we will put 40 points on Dragons and score tries from all kinds of range – especially on counter-transition – but if we can’t, we’ll find ourselves getting stuck in the mud of a breakdown slog.