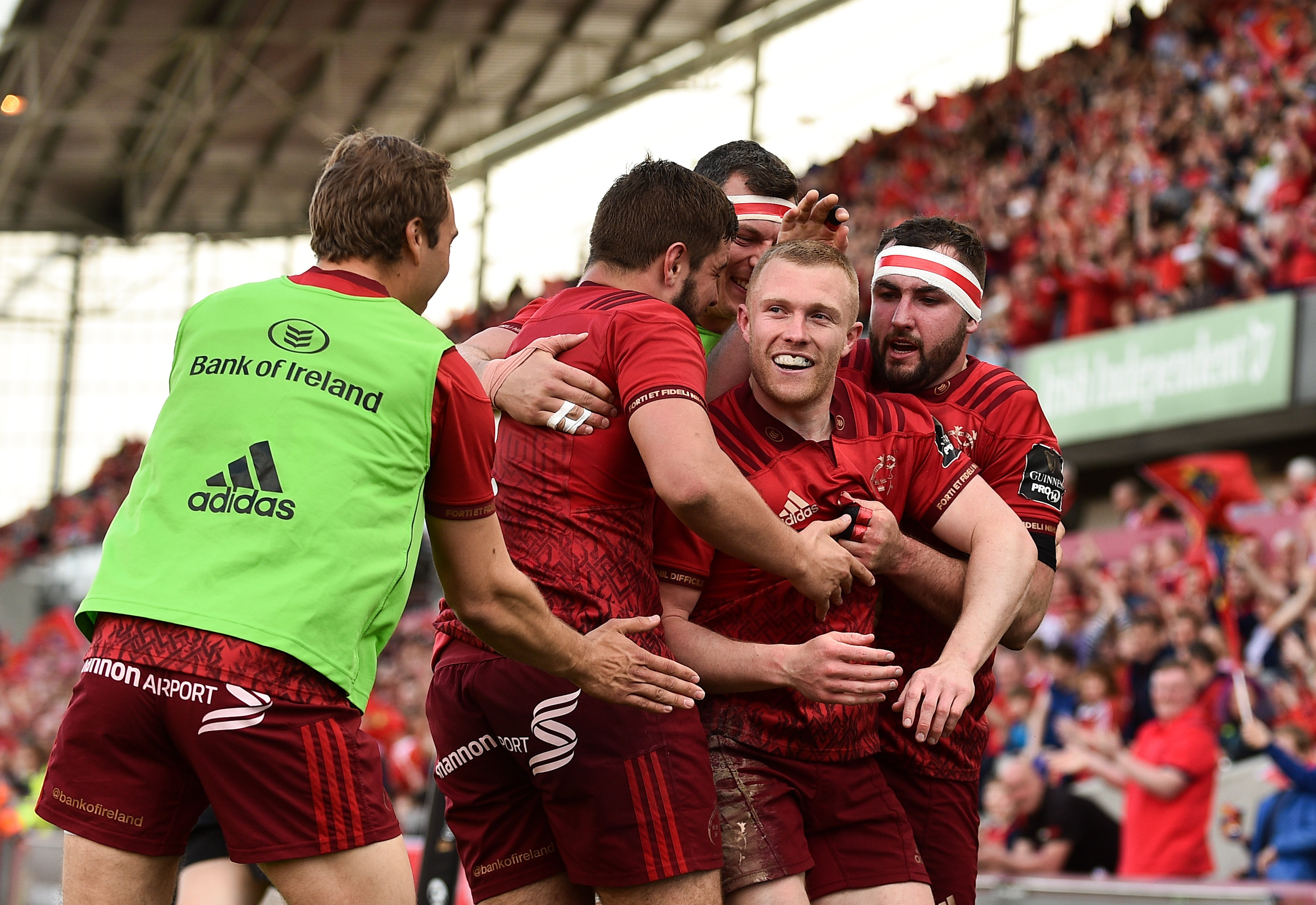 5 May 2018; Keith Earls of Munster is congratulated by teammates after scoring his sides second try during the Guinness PRO14 semi-final play-off match between Munster and Edinburgh at Thomond Park in Limerick. Photo by Sam Barnes/Sportsfile

I had a few questions in the aftermath of yesterday’s article on Munster’s kicking game and one of the main ones was a variation on “do Munster counter-attack on kick transition?”. Add in some ranty “Felix Jones has to go!” contributions in my notifications post-Saturday and I came to the conclusion that throwing together a quick article together to add to yesterday’s article might be a good idea.

Now, I’ll admit that sometimes it’s hard to separate the prevailing opinion post-game from what actually happened in the game. If you read enough Twitter or, like one emailer, a web forum where “a good man he trusts” has “issues with Felix Jones coaching” you can begin to wonder what Munster are doing, attacking wise.

That wonder (and worry) is misplaced.

That isn’t to say that Munster don’t have issues with their attack – we plainly do – but the prevalence of box-kicking isn’t one of them.

In my option, I would say that Munster need to find one or two more power-carry threats to their A Grade opposition phase play rotation along with Stander, Kleyn, Cloete, Kilcoyne and Farrell/Taute. I’d also say that the quality of our counter-attacking play could be sharper and a little better executed from a decision making POV. Those items (the former, in particular) are an article for another day but I wanted to look at a few of Munster’s engineered kick transitions to give you an idea of what we’re trying to do.

I won’t go over the theory behind box kicking again but I will try to explain why you would look to engineer a kick transition event.

First, why is this kick considered a good kick?

We’ve given the ball and a setpiece away to the opposition, yes, but we’ve also set Edinburgh up for a kick transition event.

This plays into Munster’s general attacking strategy by utilising our defensive lineout and maul defence as offensive weapons. The positioning of this lineout makes it an offensive Munster sequence even though we don’t have the ball.

Munster know that, on the balance of averages, Edinburgh will try to maul this lineout for a short time before exiting via the boot through Hidalgo-Clyne or Van Der Walt. If they go to Van Der Walt, then you’ve a large percentage chance that they’ll exit to touch but they’ll have seen in advance that if Hidalgo-Clyne box kicks off the back of a maul like this, he’s quite likely to throw up a box kick for Van Der Merwe to chase. Remember, Edinburgh will have fancied their chances in the air against Munster so they will have backed themselves to turn this defensive moment into an attacking one.

Hidalgo-Clyne kicks up the wing for Van Der Merwe to chase but his kick is too far. Munster claim the ball – imperfectly – but when we retain possession like this, our instinct is to attack the transition immediately. 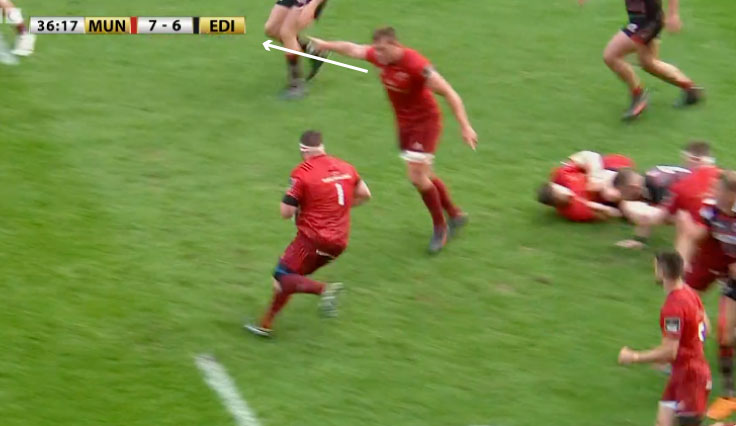 Stander tries to direct Cronin to get the ball to the space on the openside but the Edinburgh bodies in Cronin’s eyeline probably convinced him to reset with a ruck. Ideally, Sweetnam would have taken this off the initial kick to speed up our attack but Cronin’s work isn’t bad at all in recovery and we strike off the next ruck.

Let’s see how it went;

We served up a kick transition of our own because of an inaccurate kick. When I talk about sharpening up our work on kick transition, it’s this kind of thing that I’m talking about. It’s not that the kick was a bad option, it’s just that the execution of it could have been a lot better.

We were looking to get Earls running onto a crossfield kick or acting as a wide harrier on a kick across Kinghorn’s body to pressure a turnover. Instead, we coughed up a transition of our own but you can see the intention to engineer a transition event and then strike. When Simon Zebo spoke about “improving our attack” it was these kinds of moments he was referring to.

Most of Munster’s imaginative work came on the back of kick transition events.

Have a look at this one early in the contest, which came a few phases after a Munster box-kick;

We retained the ball – eventually – off a Hidalgo-Clyne box kick and began to plot the kick transition attack. After we recycled Earls catch, we were ready for a setup ruck and then a strike.

That’s a short-side superload off Zebo in the move reminiscent of the Scarlets work on turnover ball. Zebo takes the ball at first receiver with Earls, O’Donoghue and Marshall flooding the 5m channel in a tight trio. Hanrahan, Kleyn and Scannell form a decoy openside option to occupy the Edinburgh defence who’ve reset into an automatic openside blitz. 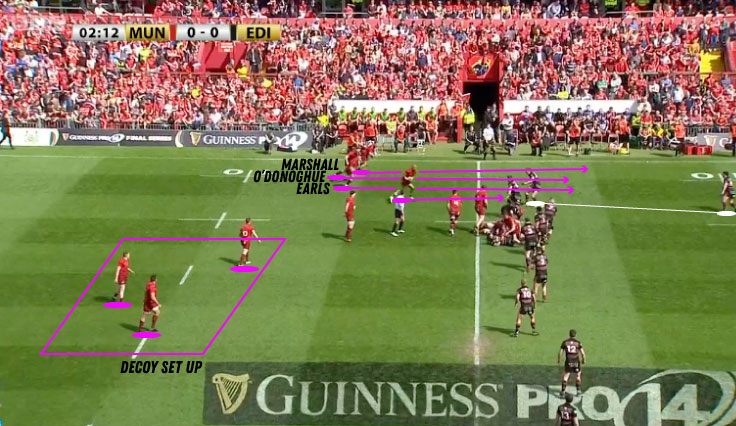 The execution of the last pass just wasn’t there. Zebo’s pass was a little off and Marshall was a little behind the pace of the ball in this instance but this was a pre-called strike play with a decoy element added to create the space on the short-side. We’ve used Marshall as a wide option on kick transition events like this all season but this was a new twist on that action. Some sharper execution here creates a 3-1 out of releatively little.

This other kick transition opportunity came in the direct aftermath of a Munster restart, which acted in much the same way as a box-kick.

After three phases of defence, Edinburgh kicked up the middle of the field where Simon Zebo could take possession and produce lightning quick ball for Murray. From there, we instantly align into a structure to attack the other side. 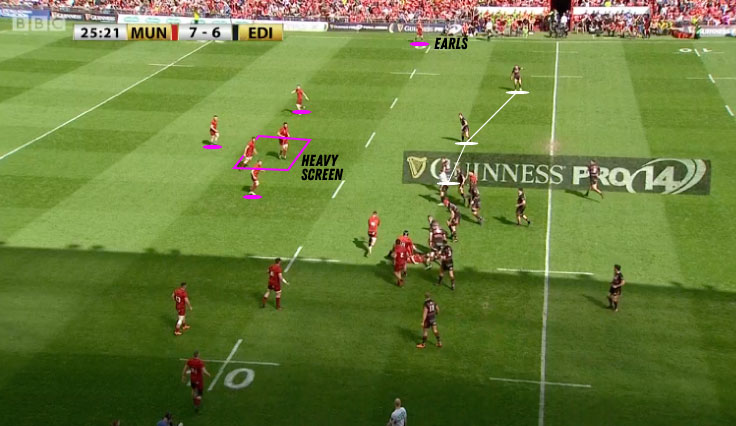 We’ve a heavy screen (Stander and Kleyn), Hanrahan, Scannell and Arnold in support and Keith Earls – again – in a very wide position, Munster are set to go straight off this transition.

We were looking to kick the ball through for Earls to attack Kinghorn on the turn but the kick brushed off Kleyn and fell right into his hands.

There were other examples too – Hanrahan’s touch finder that lead to Marshall’s try came off the back of a kick transition and the scrum that Munster scored a try off came from Mata knocking on a box kick.

We’re engineering opportunities but our accuracy hasn’t been what it needs to be in the last few weeks. I know what we’ll be focusing on for the next two weeks though, that’s for certain.

We use box-kicking to engineer kick transition events and disrupted defensive lines so we can attack into space like the above examples. We’re using this strategy to mitigate for our lack of big ball carriers in the front five and the loss of Farrell/Taute/Cloete. With those players back, we’ll rely less on the box kick to engineer space and favourable alignments, just like we did earlier in the season.

We’re not where we need to be yet as an elite attacking entity but we have the pieces in place to hurt Leinster in transition this season and build on that facet of our play (and our work on breakdown turnovers) for next season.