This is a defining game for Andy Farrell’s Ireland.

“Sure aren’t they all,” says you. There’s an element of truth to that these days, absolutely. Wales was a barometer. France was a big test. Italy was a potential banana skin and now we’re off to Murrayfield for another Defining Game™. It’s exhausting, isn’t it? Yet it’s the reality. The longer you go without showing the test game who you are as a team at this level, the more important each new game becomes until you get that statement performance.

If you don’t get that performance, trouble always follows.

This weekend’s trip to Edinburgh is crucial because of rugby maths. Remember, Ireland beat Scotland twice in 2020 – both times in the Aviva, it must be said – and those wins weren’t enough to change the narrative about how Ireland were doing in the grand scheme of things. But then Scotland beat England in Twickenham and that changed. Ireland judge themselves against how we perform against England (indirectly this week, directly next week) so a win against Scotland this weekend has become more valuable than it otherwise might have been. Yet, even then, you’d be forgiven for having an idea that this game will be “tough”, sure, but that ultimately Ireland will probably win. That’s the difficulty with this game. Scotland do seem to be better than they have been but the reality is that Scotland have only won once against Ireland in the last 10 games and the last time they managed that was back in 2017. Scotland are, at all at once, a team that Ireland expect to beat every single season while also having a recent away victory over a team that have consistently battered us since 2019.

That makes them a notable scalp, a dangerous opponent and a massive opportunity rolled into one. If Ireland win, they will set out on a path that will see them challenging for 2nd/3rd spot in the Six Nations, which is a fairly decent return on a difficult Six Nations season. If Ireland lose this game, however, we will have an incredibly difficult last game against England with the possibility of finishing fifth looming overhead.

You’d be forgiven for writing off Scott Cummings’ comments this week as the usual Scottish windiness before a big game. Scotland have done that quite a bit before playing Ireland over the last few years, for whatever reason, and it’s usually ended in a crow buffet with some fat L sauce when it comes to actual results.

What Cummings said this week stuck out to me quite a bit though in that, bar the usual dig sandwich – a dig slipped in between two bits of praise – you can see the confidence that Scotland are bringing here

“There’s definitely a couple of things we can look to do. think we’ve changed a lot of things over the past couple of years. I always talk about us becoming tough to beat, and we’re definitely working on that.

“You look at results in the Six Nations so far and we achieved that against England. We didn’t quite get over the line against Wales but it was a very close game. We know it’s going to be a massive game against Ireland. They’re always a great team, and they probably haven’t changed that much.

“They have a lot of the same sort of players they have played with for the past five or six years at least, so we know what they’ll bring. They’ll keep possession constantly, playing away with the ball, so we’ll have to be very strong defensively and on form in attack too.”

They think they’ve changed for the better while, in their opinion clearly, Ireland are playing broadly the same way as last year with broadly the same playing roster. Cummings isn’t wrong. Now he might be incorrect in his appraisal of how effective the things Scotland have planned will play out. Everyone has a plan until Tadhg Furlong runs them over and all that, but Scotland are better than they were in 2019 and 2020. We have yet to see a statement performance from Ireland to show that we are matching Scotland’s relative rate of improvement.

The biggest area of improvement based on what I’ve seen against England and Wales has been the quality and output of their front five. Everyone knows the old truism of “no scrum, no win” but I think that can be blown up even further to “no front five, no win”. Any time Ireland have beaten Scotland, it has happened in the front five first and radiated out from there. We can focus on the likes of Hogg, Van Der Merwe and Russell all we want – and they are dangerous, don’t get me wrong – but the biggest driver in improvement for Scotland has been in their front five. Jonny Gray has gone from a guy with some good tackle numbers and an incomplete game at test level to a serious, Lions grade option in the second row.

Scottish fans were baffled that Gray didn’t make the plane back in 2017 but he was half the player then, in my opinion. He’s added size, technical details at the scrum, lineout and maul plus he’s winning offensive collisions that he just wasn’t even as recently as 2019. 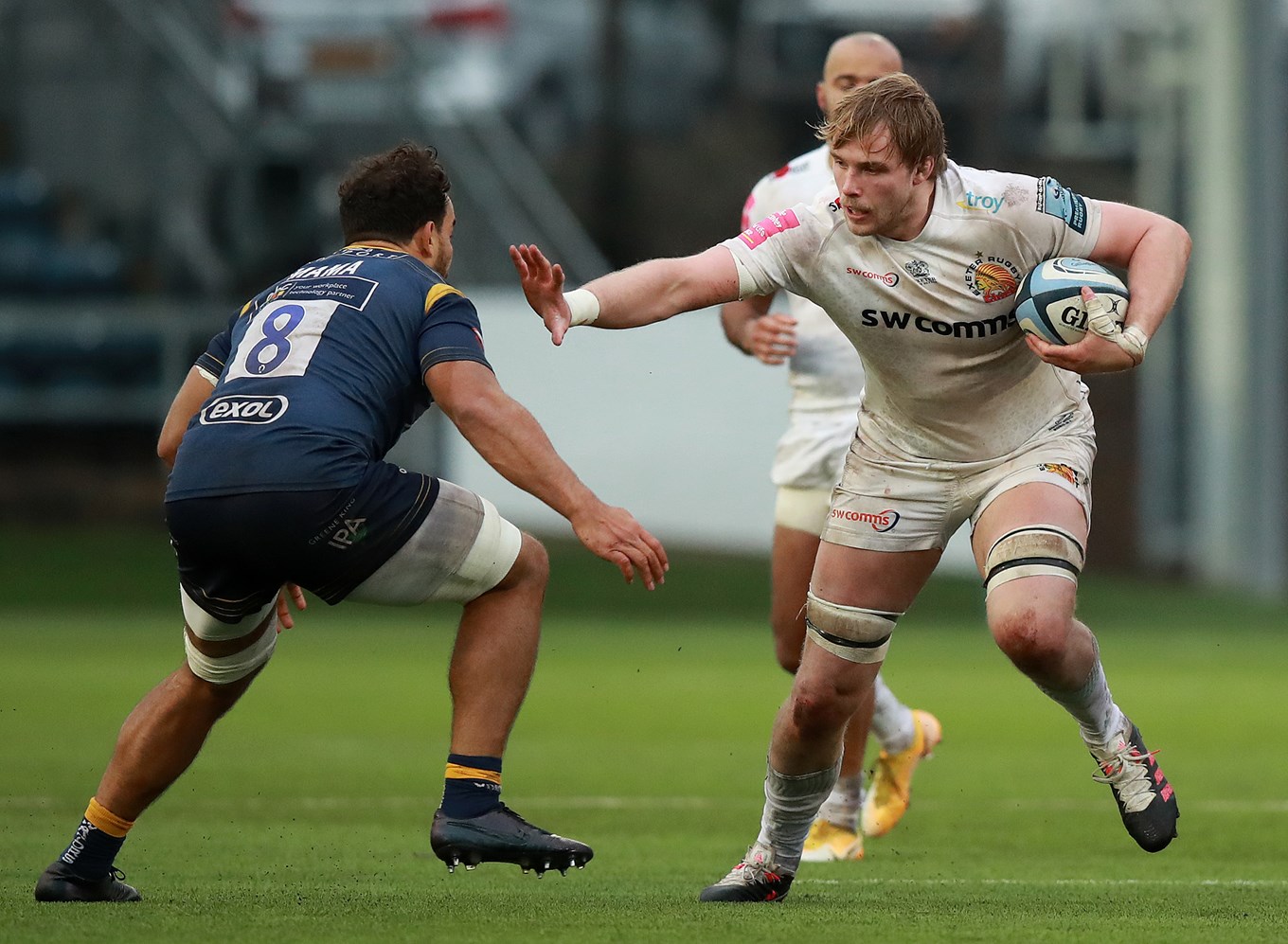 That’s before we get to the improvements visible in Cummings himself, Rory Sutherland, Zander Fagerson (not available for this game) and the improved consistency of guys like Bhatti, Nel, Berghan and Gilchrist.

Scotland have a good scrum. It’s not as good as Ireland’s from a raw metrics perspective but they are capable of hurting us there. They’ve been experimenting with some interesting things there, actually, like an illegal bind in the second rows to try and drive more pressure through on the hookers. 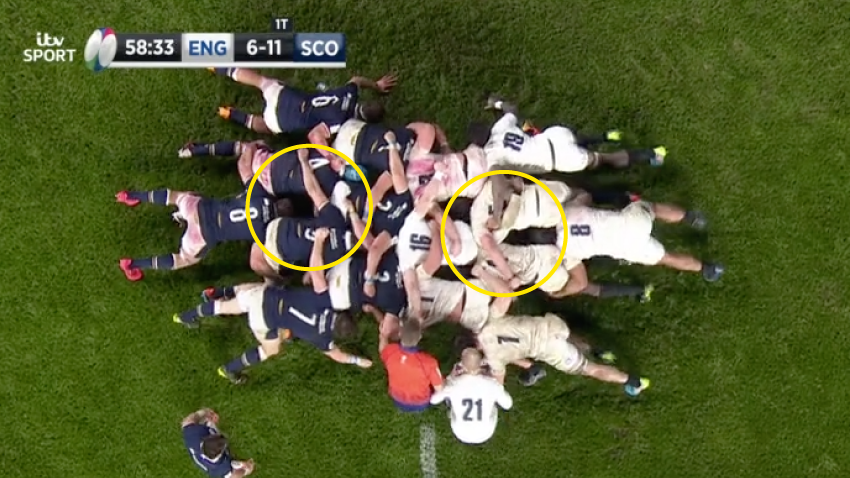 They got away with it against England but were back to conventional binds against Wales in the next round but it’s an example of the kind of edges they’re looking for.

They are an effective lineout unit as well. They have been efficient on their own throw – with an improved maul – but I would expect them to put a lot of energy into the lineout defence in this game. 75% of Ireland’s tries in this competition to date have come from the lineout and lineout maul so if I was planning for Scotland in this game, I would look to pressure this chain of possession for Ireland.

Our lineout efficiency has improved quite a bit over the last round because of how dominant we were in the air against an Italian side that couldn’t come anywhere near us. Against France and Wales, we looked way less assured and were all the easier to defend as a result.

Scotland will look to get Gray, Cummings and Fagerson into the air around the middle and tail of Ireland’s schemes quite regularly. The Scots didn’t really compete aerially against Wales in the same way that they did against England so it’ll be interesting to see what their approach will be here. Personally, I see them getting consistent numbers into the air in the middle of the lineout to force Ireland into more complex schemes.

In Cummings and Gray, Scotland have two long wingspan players who can get hands in our throwing lanes relatively easily. As ever, the lineout is inherently linked with kicking decisions.

Scotland kick more than any team in the tournament when you go by the average across games played – some of their stats are unbalanced by playing one game fewer than Ireland. France are the next closest to them but both teams kick for different outcomes. France kick a lot – and kick really long – as part of their defensive pressure game. Scotland kick as part of their offensive strategy with the idea that they will always look to get the kickback for a transition or to go for territory.

They’ve got imaginative little kicking gimmicks that they keep going back to. Like this chip kick off #9 which they will try to use against Ireland at least once because of the way we go after the breakdown.

But it isn’t fancy stuff like this all of the time. Mostly, Scotland have learned that, sometimes, you’re just better off getting rid of the ball in your own half of the field. They kick short to contest more than any other team and they’ve become incredibly good at leveraging the ball back on the opposition and using Maitland and Van Der Merwe to chase and keep them there.

In Hogg and Russell, Scotland have two of the best strike playmakers in the game and both are incredibly comfortable in long kicking duels and kicking in transition. Kicking loose to Scotland used to mean that you were risking a 60m turnover try but it’s as likely to end with massive territory loss through the boot of Hogg and Russell.

Two loose kicks from England and Wales were punished by deep daggers into their backfield. Hogg and Russell’s kicking accuracy is such that they manoeuvre your backfield into unbalanced positions if they are not accurate with their routes.

Lowe’s decision making and positioning will be under key stress in this game as Russell and Hogg will look to get Maitland in his airspace. They’ll also want to produce a size mismatch for Van Der Merwe on Earls if they can consistently work that isolation.

Don’t be surprised to see Russell going after plays just like this on either wing.

If you’re wondering why Earls got selected here ahead of Larmour, it’s because of the defensive positioning and reads that will be required due to Scotland’s variety off the boot as much as anything else. Even with Earls positional ability, that battle with Van Der Merwe with the ball in the air is going to be one that Scotland will want to go back to. Maitland running at a turning James Lowe is something that I think is quite likely too so we’ll see how that area of the game develops.

Scotland kick to pressure you into a bad exit or a kicking mistake during a duel. A lot of pressure is going to come on Gibson-Park’s box kicking more than anything else, especially if Scotland’s front five can keep Ireland below 50% on the gainline and Ritchie/Watson get into a rhythm over the ball at the defensive breakdown.

Gibson-Park’s ability to box kick accurately and consistently will be a key part in Ireland building into the game. If we kick loosely to Scotland we won’t just be under pressure for conceding a worldy try, they’ll use that space to stress our backfield and our lineout. That’s a lot of responsibility and the game could well hinge on that aspect of our halfback’s performance.