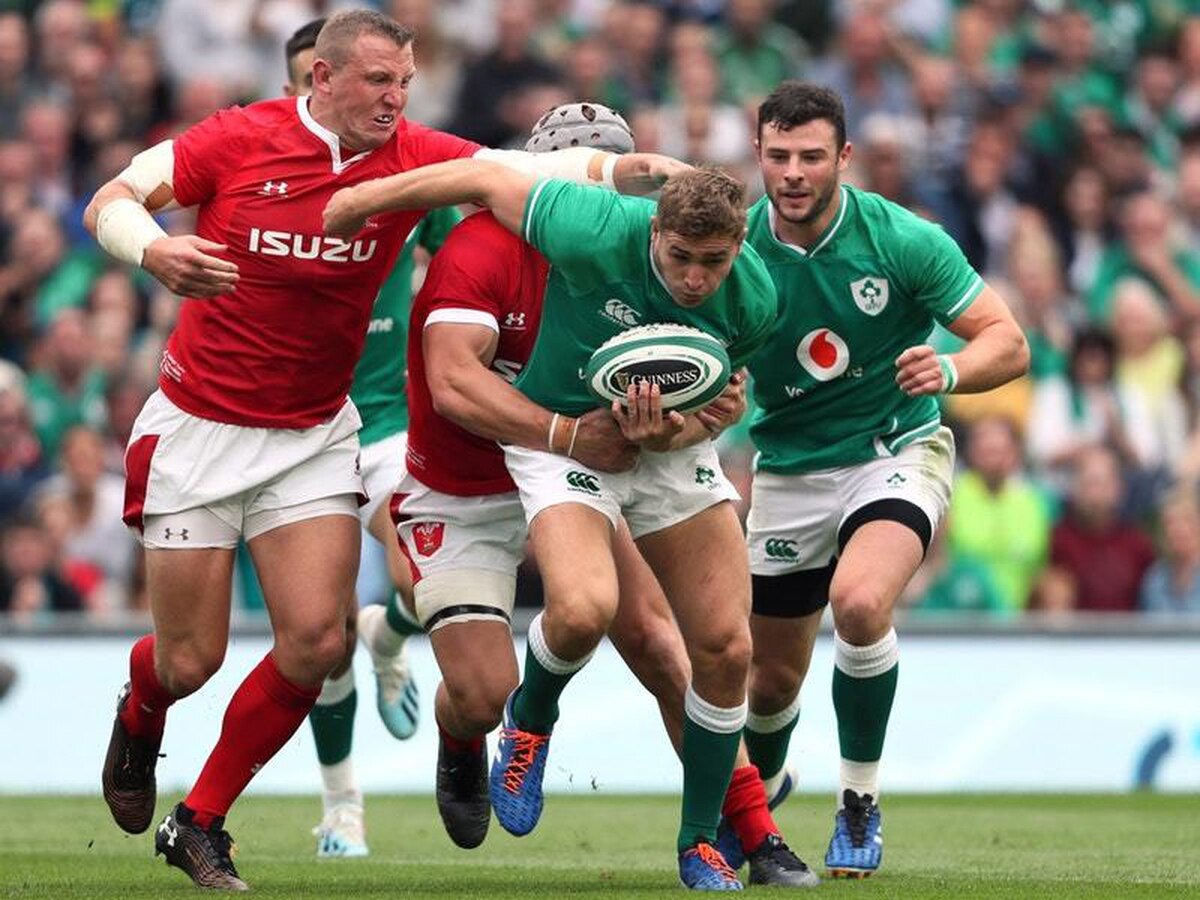 It’s Ireland vs Scotland. It’s the Quarter-Final Before The Quarter-Final. It’s Yokohama, Japan. All the months of planning, subterfuge and training has lead to this period of 43 days and, hopefully, seven games. Forget about Dark Horses – for the first time in our history, Ireland enter the World Cup as genuine favourites and, let’s not forget, the #1 team in the rankings. The days of hope are gone, to be replaced by it’s harsher cousin – expectation. “Hope” is a kind and pleasant land, and it’s lush hills are full of people who won’t be too angered by failure. After all, they never really expected anything else. “Expectation”, on the other hand, demands results and batters you on it’s rough, stone cliffs when they aren’t produced. In Expectation Land, there is only winning. Losing is for Hope Land. Winners – real winners – want to live with expectation because it means they win way more than they lose, and especially when it comes to the Big Days. Hope is for Dark Horses. And that isn’t Ireland anymore. We want to win this tournament. We have beaten every other major team in this tournament multiple times over the last four years and there’s no reason why we can’t do it again.

A lot will be made of the path to a preferred quarter-final against what is now likely to be the Springboks. We’ll certainly watch the All Blacks/Springbok game but, in a way, that result doesn’t matter.

Remember – we’re in Expectation Land – so Pool B will work itself out one way or the other and Ireland will deal with the Springboks in due course. If it isn’t in the Quarter-Final, it’ll be in a final, and that has to be the attitude; if thinking that far ahead was something this squad indulged in. For now, there is only Scotland. Ask yourself, what would a team that has designs of lifting the Webb Ellis Trophy in 43 days time do in their opening Pool A game against Scotland? They’d win it and then cruise through the rest of the Pool with no worries about who else is doing what.

Scotland are no pushovers, and they’ll have their own designs on what they want to happen in this tournament, but if we want to keep Expectation Land happy, a win is the only thing that will suffice here. And then every other game after that.

Living in Expectation Land isn’t easy, but it is straightforward.

Let’s get to the teams. 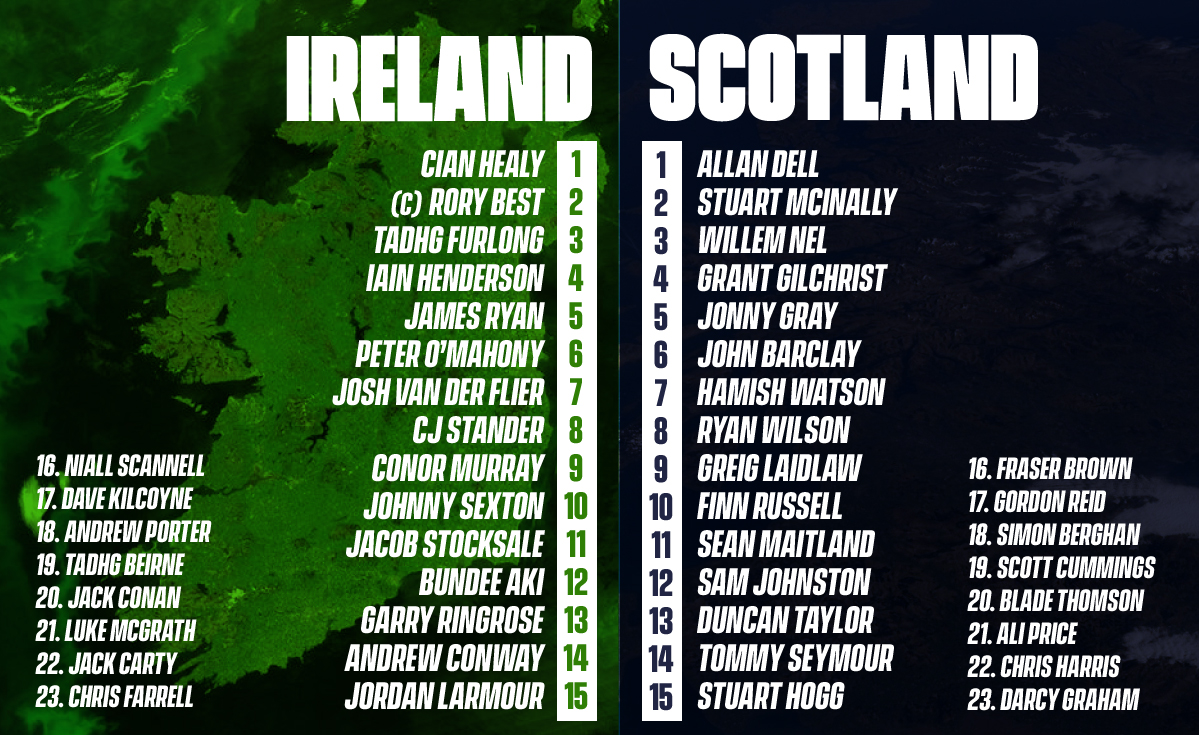 The Green Eye Report is where I rate the opposition (and Ireland) as a whole in a World Rugby context as first choice units and then, depending on the how far away both Ireland and the opposition are from what I would consider “full strength” and how the teams actually taking the field rate against each other.

I’ve already covered a lot of what I expect from Scotland in Attack and Defence earlier in the Preseason and I haven’t seen anything else from them in the interim against Georgia to change my mind. The selection Townsend has gone with for this game is about as good as he can muster at the moment, and he’s made a hard decision on the patterns he intends to use with his 31 man squad. I don’t see any heavy ball carriers of note in this Scottish XV so what does this say about what they intend to do with the ball in hand?

I think they will stick to what they have done all year – attack in thirds. 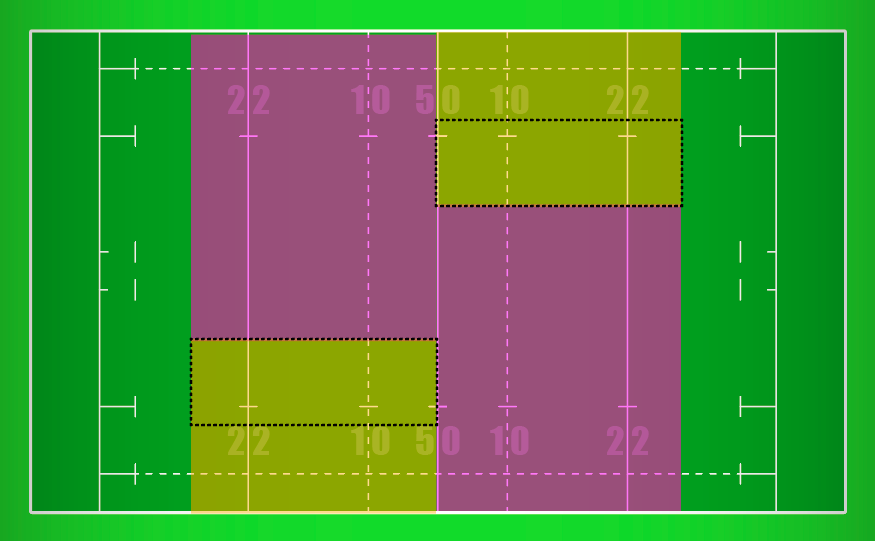 If we split the pitch into thirds going post to post and then divide each position into a section of one third (yellow) and two thirds (pink), you can get a good idea of how Scotland structure their attack from a spacial perspective. Scotland punch their carries into the edges of the first third (yellow) and then use quick ruck ball to spread the ball wide into the pink box, where they have structured layers of attacking runners. The black dotted box is the rough radius of where they like to position these rucks.

This structure is perfect for a team that doesn’t have a lot of power carriers up the middle of the field, which is true for Scotland. This rough spacial structure was present against France and Georgia both times.

This spacial structure gets the ball into the hands of guys like Watson, Taylor and Hogg in areas where they are incredibly dangerous. If you have dangerous Strike Zone runners, then you want to get the ball to them with a defence drifting in front of them. 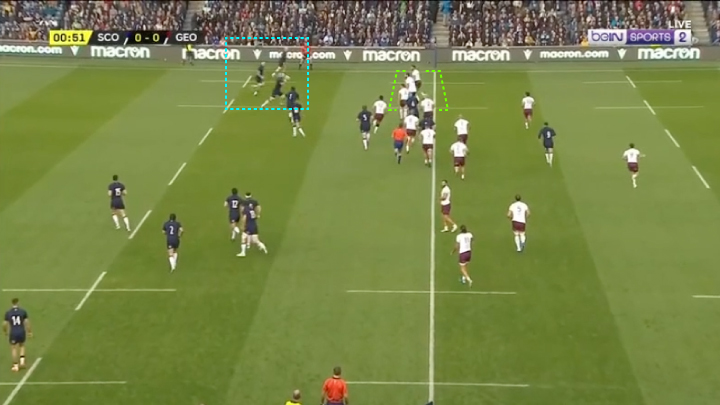 Scotland love this structure because it gives their mobile forwards space to attack on the inside looking for pop passes and offloads. 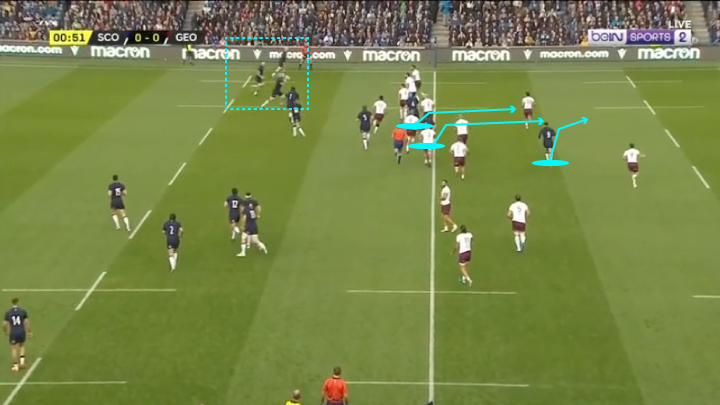 Price in this instance – and Laidlaw on Sunday – will run well ahead of the play looking for edge gains. When Scotland have to launch attacks closer to the centre-field, I think they end up playing a game they don’t want to play, so you’ll see them hunting for position around the 15m line whenever possible. Garry Ringrose will need to be at his very best in this game, along with Conway, to read Scotland’s wider plays. Our movement when the ball is in the air on the Scottish pass will be vital because Finn Russell, Sam Johnson and Stuart Hogg are very good at punishing over-aggressive defensive surges.

We faced this against Wales too, at times, and handled it well. Look at Henshaw using the slow speed of the ball in the air – because of the distance it’s travelling – to track the target.

Ringrose will have to provide similar intelligence, rather than brawn, in defending these wider Scottish plays.

When they don’t get the ruck speed that they need to launch or they’re waiting for the wider structure to build, they’ll run a tight pod off a ruck to set position. They aren’t looking for massive gain line here, more so quick ruck possession to set the opposition defence. Look at the position of this carry and the structure building outside it.

When the ball carrier was stopped and slowed, their ruck became vulnerable to attack. That will be there all day for us on Sunday because Scotland will be positioning their forward runners away from the initial ruck. Attacking that setup breakdown could provide big gains for Ireland and it’s no surprise to see Beirne on the bench ahead of Kleyn, for this very reason. Scotland want to gain most of their territory with ball in hand up the edges on plays like these and if we can take it from them, we’ll be doing well.

The main issue with Joe Schmidt’s selection for this game seems to be the absence of Rob Kearney and Keith Earls, who just didn’t have enough time after recovering from their knocks towards the end of the training week. A lot has been made about the selection of Jordan Larmour at fullback but I don’t think it’s necessarily a massive weakness for Scotland to exploit.

Rob Kearney is so highly rated by Schmidt because of the intelligence of his defensive positioning and the physicality of his tackling once he’s in position to make a tackle. Playing at fullback is a thankless enough job because, most of the time, when you’re forced to tackle you’re doing so last-ditch in the tramlines coming across at a horrible angle. Playing at fullback is about the attacks you prevent just by standing in one area rather than another.

To properly understand how a fullback operates, you have to first look at the defensive system they’re operating in and the situation they’re defending.

First, the structure. Over the past few games, Ireland have been playing with a rough 13+2 defensive structure.

Depending on the situation, Ireland keep strong numbers in the middle of the field to close down space and force the opposition to crash into our heavy inside defence or else risk sending the ball wide where we can scramble and pressure the wider, less-resourced rucks.

The x-factor here is kicking attacks, which England and Wales used to excellent effect against us in the Six Nations. If you’re not getting much joy on the gain line – and I think this will apply to Scotland – the next best option is to vary your kicking. There’s the box kick up and under, which we’ll see anyway, but Scotland have been trying out a few kicking schemes to mix up their attack.

Here are three options that Scotland tried against Georgia that I think we’ll see on Sunday.

Two of those are off the Scots favoured attacking position around the 15m lines, but that option off centre-field ruck position is something that’s right up Finn Russell’s street. If it’s expected to be wet and greasy, you will see Scotland target our backfield.

Our positioning in the backfield here will be crucial because Townsend and Russell will be expending a lot of mental energy in manipulating Larmour’s positioning.

This is a routine take by Kearney in the end – well, he makes it look routine – but you can get a good idea of the positioning needed from Ireland’s back three.

Larmour, who was playing on the right-wing in this game, reads the body position of Patchell and drops back into the “pocket” – the space between Kearney and the Welsh chasers – to provide a screen for Kearney to attack the ball front on.

Earls had dropped into the backfield before the ball even came out of the ruck, in line with the system’s requirements. 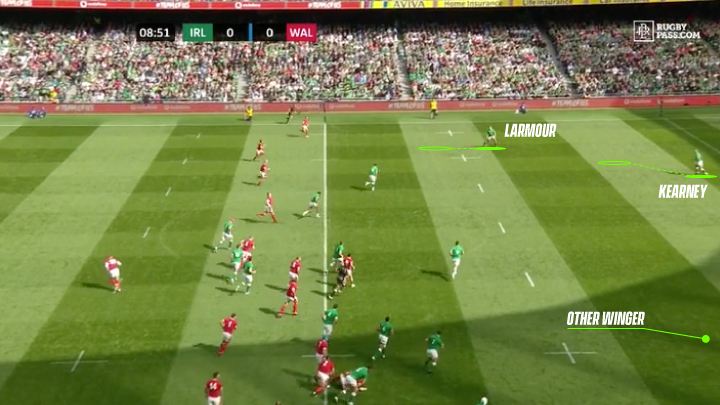 Defensively, the right-wing (Conway tomorrow, Larmour in the game against Wales) acts like another fullback, especially against Scotland so Conway and Larmour need to be on the same page on these testers come kickoff.

Ireland also use Murray and Sexton to rotate around the backfield to make sure Ireland always have coverage. When Larmour was involved with a tackle on one side of the pitch, Murray dropped back into the space behind the ruck, while Kearney filled the space on the other side of the field.

The nuance of fullback play is picking the exact right position to best effect the play. In the above instance, Kearney was in the right spot to cover the ball after the contact. Larmour will have to make the same reads – based on the opposition wingers body language, the body language of the first receiver and the position of his own players.

Scotland won’t be able to resist targeting Larmour’s off of central scrum position – especially in the aftermath of his “overbite” on Vunipola in the build-up to England’s first try – so I’d expect a reverse play like this at some point on Sunday.

Kearney started off going 4 for 4 on the right side of the scrum but had to cover across in a real hurry to take on the reverse play with a kick from Wales. Scotland will look at that and think they can catch Larmour on the cover in the backfield.

Larmour certainly has the pace to recover from any overcorrection, but his handling and “presence” will be tested.

It’s all ready to go. Let’s get into it.