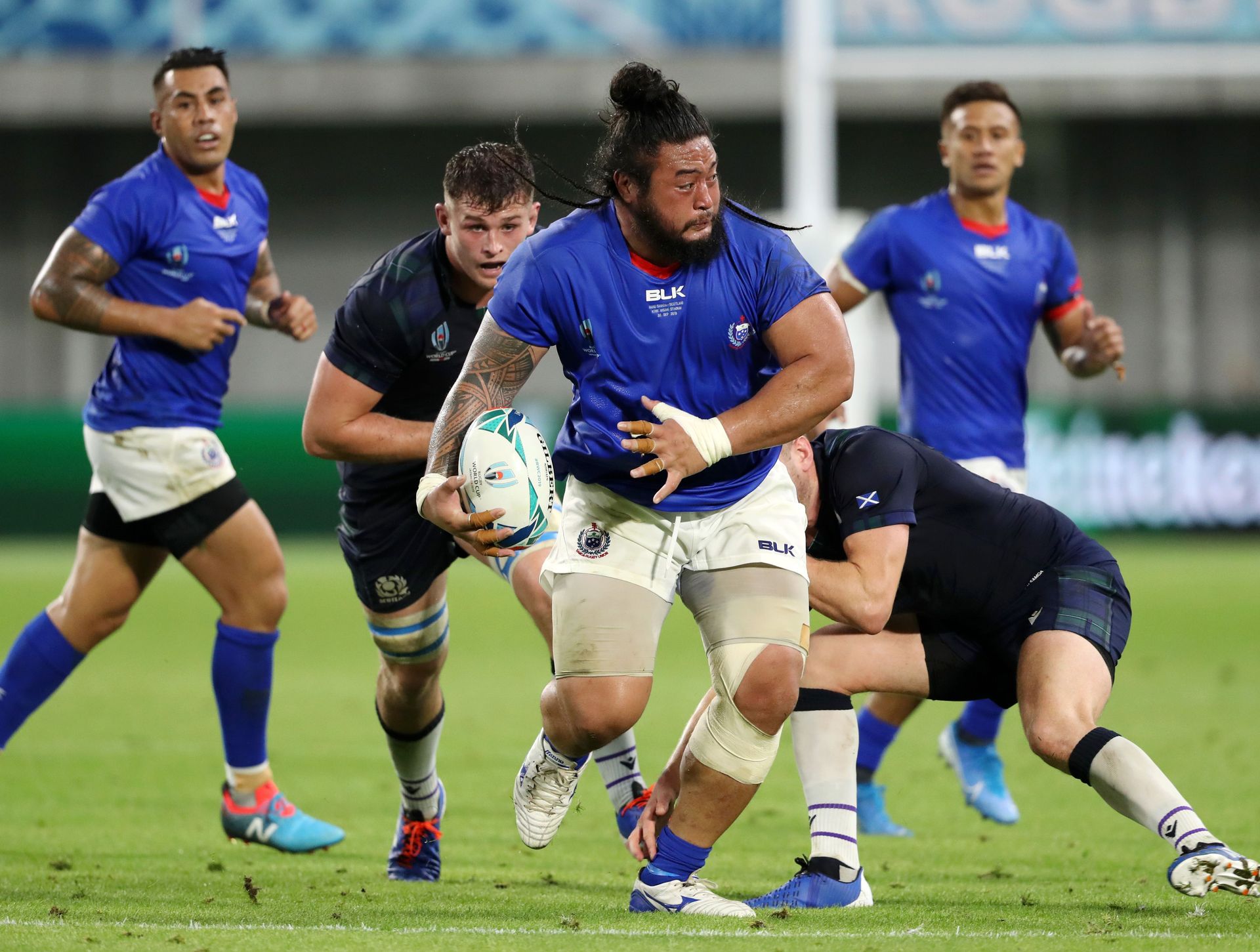 The recipe for beating Samoa in the manner required in our final pool game isn’t complicated.

Much of the ruck and maul fringe weaknesses that were there for Russia will be here for Samoa too, albeit accessed in a slightly different way, along with some kicking and edge plays that I’ll look at later, but even that is too complex. Ireland must win with a bonus point to keep the pressure on Japan and Scotland, Typhoon Hagibis allowing, but at this stage of the tournament, we must also win with a bit of “panache”.

Samoa won’t be pushovers but failing to get a bonus point, or losing to them, would be unthinkable for Ireland, even with the difficult weather we’re due to face in Fukuoka this Saturday. The weather conditions, like the humidity in games prior, won’t be something that Ireland can point to if this game goes wrong. It won’t be fair, but we’re at that point in the World Cup when the impressive dismissal of Scotland feels like it was six months ago and all that remains is the memory of slogging it out against Japan and Russia. This is knockout rugby for the psyche. If we can’t perform here, when can we perform? For the sake of Ireland’s rugby bubble – I won’t claim to speak for the squad and staff – we need something to sink our teeth into here before the real knockout rugby begins.

In a lot of ways, Samoa play a lot more like Ireland than they do, say, Japan.

Samoa play mainly off #9 in Q2/Q3 and kick a lot more than you’d traditionally expect in Q2. There are offloads, sure, but you’re far more likely to see the Samoans play patterns like this.

I think Ireland are much better equipped to handle this kind of pattern than they are chasing touchline to touchline against the likes of Japan, for example, who regularly gained ground at the edge of the Irish defence before earning soft enough offside penalties on the way back across the pitch. If it comes down to an Off 9 slugfest, Ireland should win those collisions pretty handily.

The attack is the more pressing concern, given what we need from this game.

Like Russia, Samoa’s lateral coverage around the fringes of mauls, scrums (look for a Stockdale chip and chase off a left-sided scrum at least once) and ABC areas of the ruck can be targeted. A lot of the plays I described last time for the Russia game apply to Samoa in a lot of the same ways.

If I was to pick three main areas where Samoa stand out to me as relatively weak, it’d be defending their edge spaces in Q2/Q3, defending kick plays and a tendency to “overhit” on defensive lineouts. I’ll be covering the latter two here.

First, what do I mean by an “overhit”?

Have a look at this lineout and pay attention to Blue #7 and Blue #10.

Russel lingered in the #10 channel for a heartbeat before bringing Harris in on a short, angled carry. Harris set Blue #7 for a big hit before letting the ball off to Maitland, who could attack the isolated Blue #12 frozen in the space outside of the Samoan overhit by Blue #7 and Blue #10. 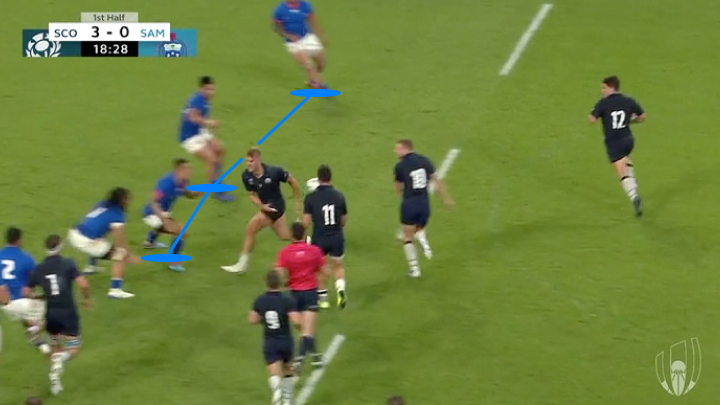 For me, I think this scheme could have produced a clean linebreak if Russell had run a flatter line off his initial pass to Harris – as if going for a loop return pass – because it would have helped to overload Blue #12 and give Maitland a look at attacking the most vulnerable player on a Samoan “overhit” like this – Blue #13. 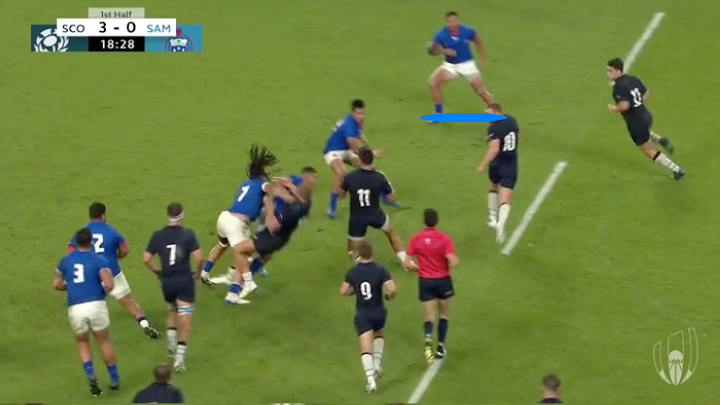 When Samoa saw that Sexton was due to play in this game, the likes of Ioane, Vui and Lam would have been foaming at the mouth at the thought of lineout defence scenarios like this. We need to give them the hint of that opportunity on Sexton to narrow them in, but then hit the spaces where they aren’t.

We could run Aki on a Harris-like line off a Sexton loop decoy, before passing inside to the likes of Murray/Earls and then sending a flat pass to Henshaw or Larmour with Sexton holding Blue #12. You could run another variation of it where Stockdale attacks Blue #12 for an offload play.

TJ Ioane, in particular, is someone worth targeting off the scrum for overcommitting on Murray and Sexton.

Samoa’s kick defence is another weakness, especially in Q2/Q3. The positioning of their secondary defenders in the backfield in the direct aftermath of lineouts and transitions is something we can go after on crossfield or centre-field kick throughs.

Here is a fairly typical example of the Samoan Q3 defence, and where I can see targeted kicks against the grain of possession having an impact. Nanai-Williams (Blue #15) tends to follow the ball on Q3 defensive sets while the Samoan scrumhalf tends to cover behind the defensive line in the space where Nanai-Williams isn’t when the ball is in central positions. 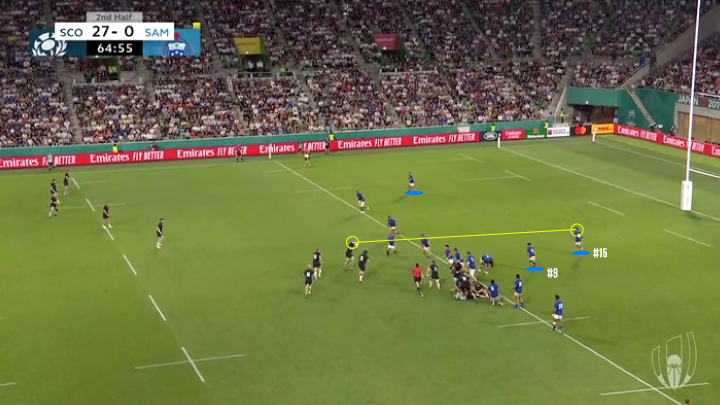 When the ball moves towards the edges, the Samoan scrumhalf tends to sweep into the primary line towards the potential linebreak.

That often leaves an isolated backfield defender looking after 30m of space on the opposite touchline. 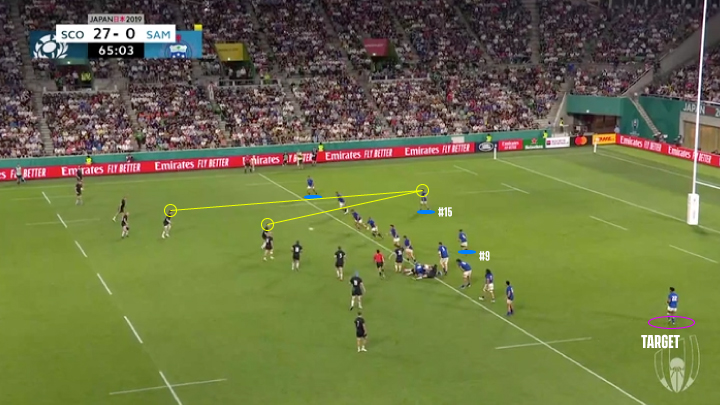 So what’s the plan?

Get a centre-field position in Q3. Move play to one side to draw Nanai-Williams away from the centre of the backfield. Draw the scrumhalf into the primary line. Target the opposite backfield defender with a crossfield kick.

Scotland scored a try from it and you could see Japan going after the same scheme but it was less effective because of how close they were to the centre-field. Both times, you see the “fullback” running to catch up with the ball after tracking the first receiver and the scrumhalf drawn to the defensive line.

Kicking straight over the top of the defensive line in Q2 – in the manner we did against Russia – should expose the Samoan tendency to leave a lot of space behind their primary line, which they do to help their own kick transition attack.

Ireland should get a lot of return from box kicking down the wings at Tuala and Fidow because neither are all that great in the air but, more importantly, the Samoan re-set after box kicks leaves a lot of gaps for Ireland to attack directly after the box kick.

Other than that, I think we’ll be doing well if we can pin the Samoans back into their half through tactical kicking from #10. Samoa’s lineout platform can be attacked and if we can disrupt them in their own half or force sloppy exits, there are tries in transition all day.

Essentially, as long as we don’t overplay, we should squeeze Samoa out pretty handily.