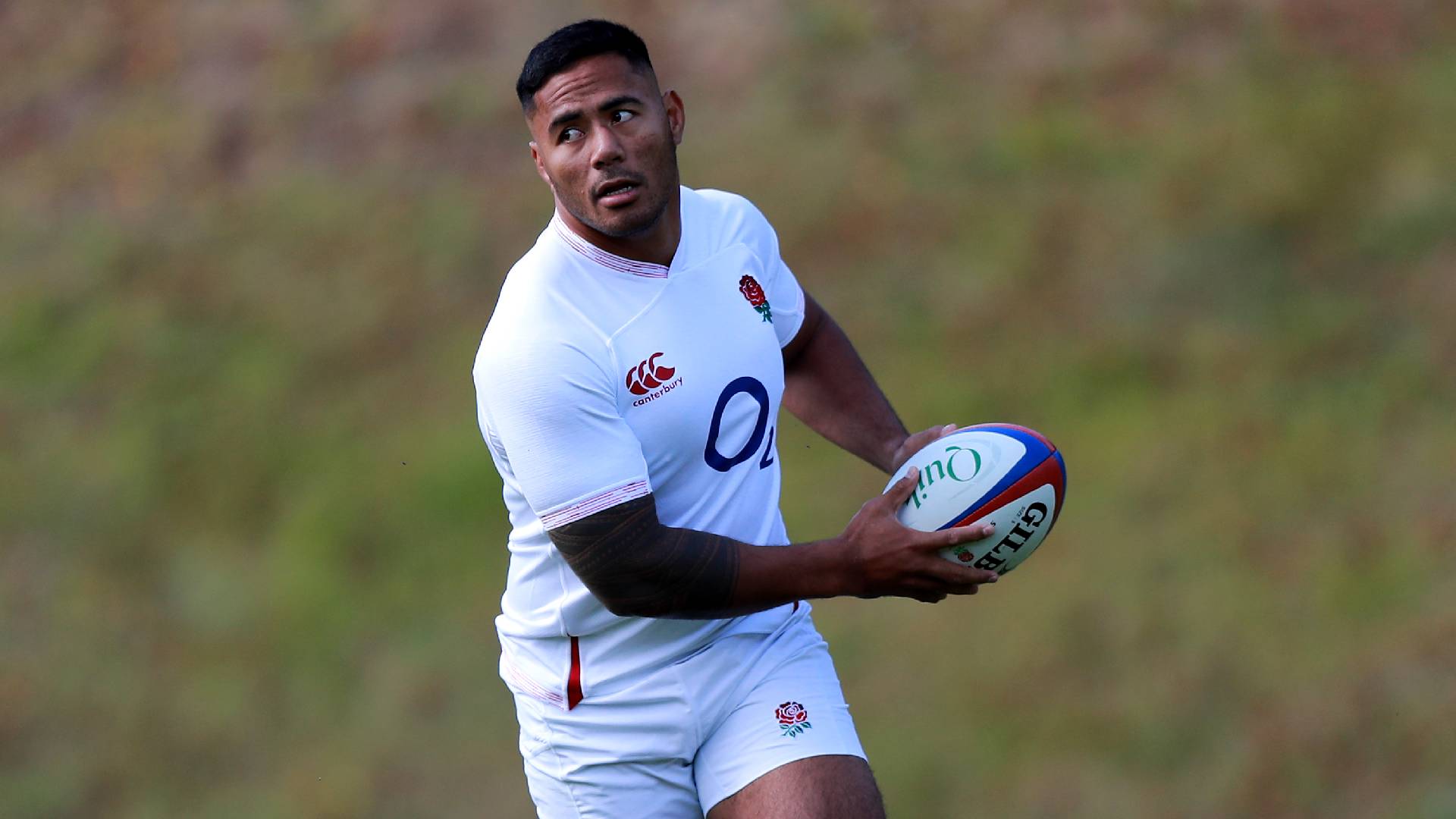 Getting your international teamsheets on Tuesday is a blessing.

You get way more time to lay out what your pre-analysis might be and how the opposition might try to counter it with the players they have available and using their past games as references for how we might match up well with them. The extra few days are super helpful.

Unless a key component in your match preview – Iain Henderson – is forced to pull out of the game before kickoff. Then your thinking has to take a sharp turn. Despite Henderson not pulling up trees so far in this Six Nations, I think his unavailability for this contest has tilted the balance slightly in England’s favour.

Eddie Jones has some issues of his own coming into this one. Replacing Billy Vunipola’s impact as a lead ball carrier has been a constant source of selectional angst and his hand has been further weakened by the loss of Mako Vunipola and worries over the fitness of Manu Tuilagi, who is fit to start at the very least.

Looking at Jones’ selection, we can see where he’s both confident and anxious. Ireland’s two losses to England in 2019 – the Six Nations opener and the thrashing in Twickenham before the World Cup – were based on forward dominance and Eddie has gone for a big starting pack and a 6/2 split on the bench. The continuity of purpose that a 6/2 split gives you in the forward pack allows you to manage the energy load and output of certain players dramatically differently because you’ve got three non-front row replacements to drop into your back five.

But when we look at his outside backs, we can see his worry over the fitness of Tuilagi manifest itself with the selection of Jonathan Joseph on the wing. What does this tell us outside of “Furbank is injured”? I think it means that Jones badly wanted to get six forwards onto the bench but he remains unconvinced by Tuilagi’s fitness so, essentially, he has stacked Tuilagi’s likely replacement on the wing as an alternative strike running midfielder for use on certain big openside phase plays and off the set-piece.

This is going to be a fascinating game, but we knew that already.

Losing Iain Henderson changes up how Ireland have to approach this game.

Henderson has heavily involved in the lineout tactics of the last two rounds but, if anything, I think Toner is an improvement on that aspect of the game. That isn’t to say that Henderson has been poor in that aspect of the game – he hasn’t – but you know what you get from Devin Toner and rock-solid lineout work is certainly one of them. What we’ll really miss is Henderson’s hit up work, where he takes the ball to the line between 6 and 9 times a game based on his work so far in this tournament. Henderson isn’t a lead carrier, and I don’t think his carrying has been outstanding to date, but he’s an important part of our carrying rotation and racks up big numbers on offensive breakdown. I don’t know if Toner can replace both of those like for like. He should be close on the breakdown arrivals but unless he’s coming onto the ball in very specific circumstances

I suppose it comes down to how much possession we expect to have and how much possession we want to have. I think trying to play too much rugby in our Q2 for the sake of expansivity would be a mistake and that smart territorial kicking is the way to build into this game. England did a great job of slowing France down at the ruck – only 35% of France’s rucks produced quick ball as opposed to England’s 55% – and they’ll look to do the same here, especially in that Q2 area. The remedy here is knowing when to try something through the hands and knowing when to reset through Murray or Sexton kicking.

England’s preferred lineout launch against France was a five-man lineout (44%) and, given the makeup of their pack this time, I think it’ll be the same here. They’ll want to keep Curry, Underhill, Joseph and Tuilagi active in the midfield to maximise their ball carrying threats so that means Itoje, Kruis and Lawes taking responsibility for the lineout. I think we can get at this part of their game with the pod of Furlong and O’Mahony at the front and Toner’s wingspan at the middle and back. If we can disrupt their lineout launch, we can limit their ability to bring Tuilagi onto the ball off the lineout where, for me, he’s most dangerous.

For me, I think Ireland’s best way into this game is off our own lineout launch and smartly engineered box kicking chase opportunities.

I’ll deal with the box kicking here and speak about the lineout in the Blood & Thunder Podcast.

It would be a bit reductive to conclude that because Joseph has 11 on his back that Ireland will look to target him directly under the box kicks. That is our ideal scenario While that might happen a few times, I’d be very surprised if Jones is planning for Joseph to be in the backfield in those scenarios all that often but for us, it’s the ideal scenario. In all liklihood, I think we’re much more likely to see Conway attacking Daly one on one in the air rather than Joseph.

On most slow box kick setups around Q2/Q3, I think we’ll see England set up more like this. 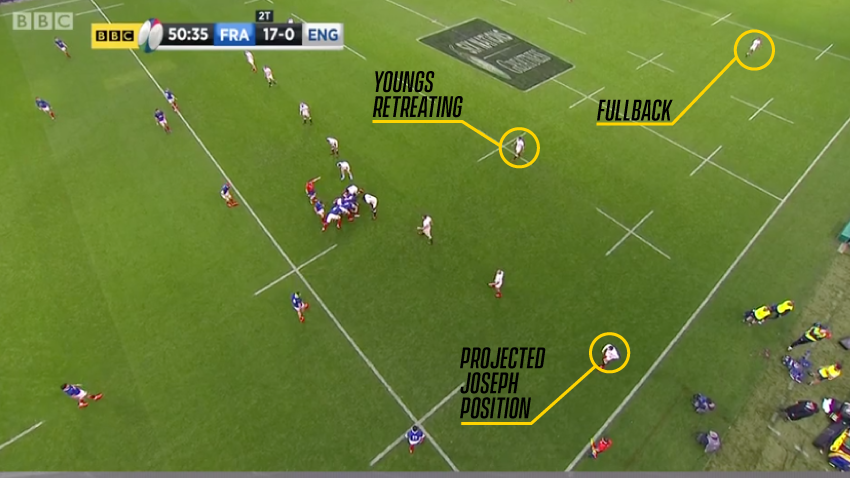 Joseph will be up in the primary line and tracking backwards rather than standing in the backfield. He’ll be expected to track back and offer support to any resulting breakdowns but I wouldn’t expect to see him drifting back before the kick on these plays unless there’s no cover there. For the most part, I expect it will look like this.

It’s not inconceivable that Joseph could find himself in that backfield position at some point though and, when he is, I’d expect Ireland to kick at him as soon as they spot it. I think Conway and Larmour stack up quite well with Daly in the air so this is a play we’ll have a few cracks off.

However, I think it’s much more likely that Ireland will look to hit Joseph off a Sexton crossfield kick in Q3, rather than off a Murray box kick from Q2. This will come on phase play or off a wide scrum position between the 10m lines.

You can see the rough principle in action here. 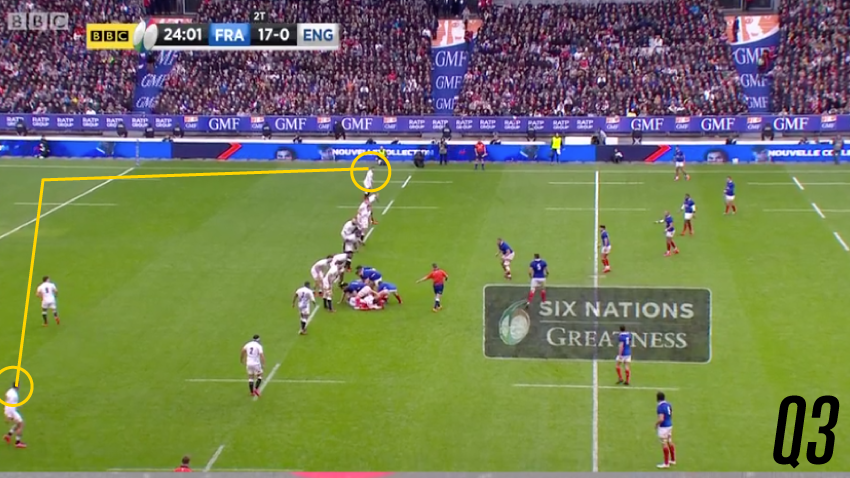 When May sees the play head towards his left-hand side, he drops back. When Daly sees the play coming towards him, he steps up into the line. Youngs drops back into a central position and the full-back Furbank (off-screen) moves to the left side of the field as he sees it.

It’s a pretty basic backfield coverage in this Q3 position but this is where Joseph’s lack of experience on the wing at test level might come back to hurt him. How experienced is he at reading first receivers? How is his movement under pressure as the ball leave the ruck? Will he advance too far? Or will he take drop too far back to give himself time under the ball?

It’ll be especially pronounced on rucks from the opposite side like this;

That’s exactly the type of picture that Sexton will be looking to generate in this game – Joseph wondering about his backfield positioning on a big openside play and getting frozen under the crossfield kick with Conway and Larmour chasing him down.

If Ireland can withstand England’s usual big push inside the first five minutes, I think we can make this game quite uncomfortable for them with our use of the boot.

If we can create more positive pictures in this aspect of the game, I think we have a reliable route to accessing the positive field position on a regular basis.