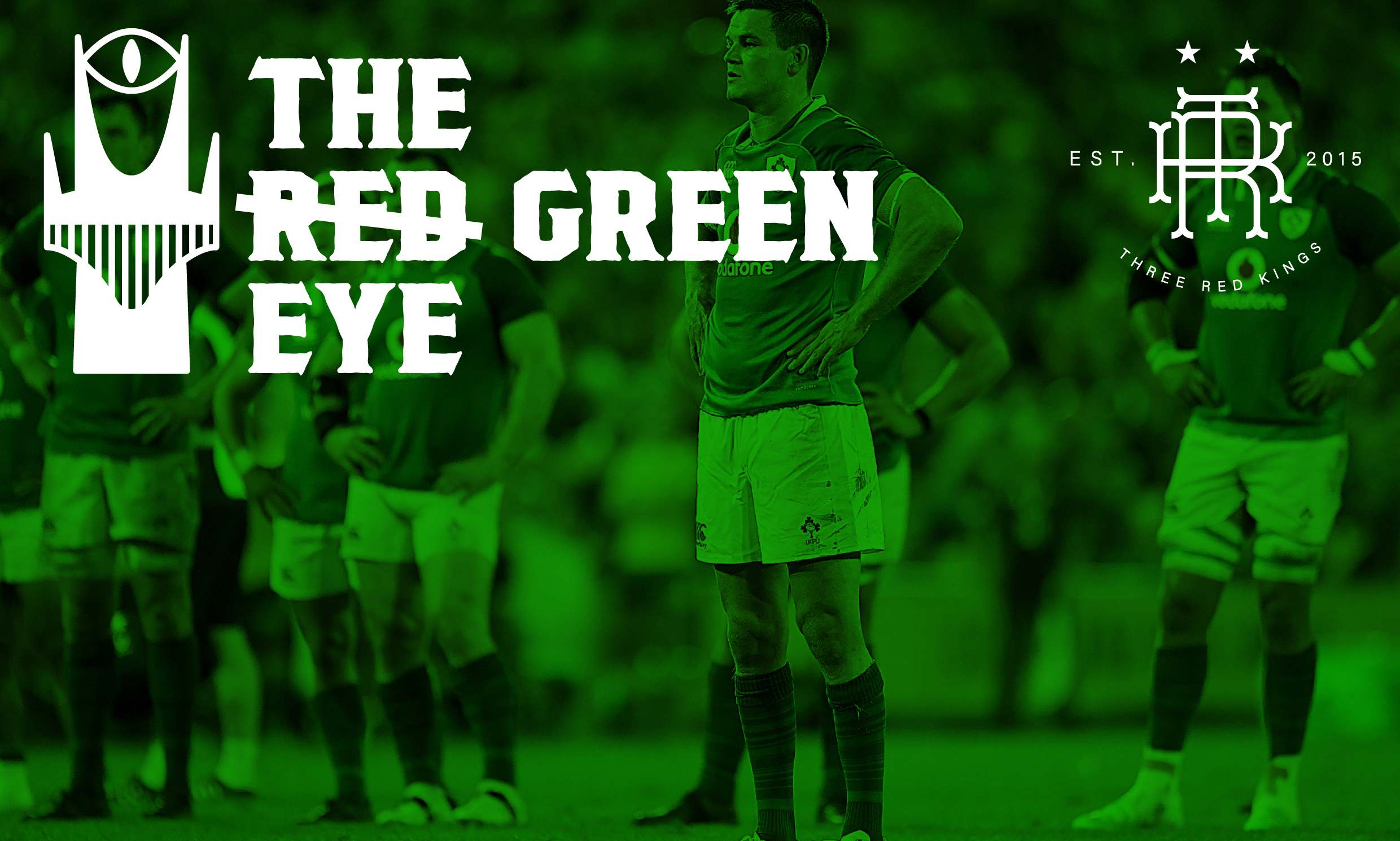 That’s what an NZedder buddy of mine sent me on Whatsapp a few days after Ireland defeated the All Blacks in Soldier Field. There were a few emojis in there that took away the ominous nature of that text, so I won’t include them for dramatic reasons, but you got the real message being sent. New Zealand had lost to a team they expected to beat and the reaction to that would be brutal.

That physical reaction – not silky skillz, offloads and other Youtube sizzle reel stuff – is what marks New Zealand as being the best team in the world, for me. When they lose, they make the next team pay and if that team happens to be the team that beat them, the price doubles. If Ireland have designs on knocking the All Blacks off their throne, then their collective reaction on Saturday will have to extract the highest price possible from the Wallabies.

“[The squad] are pretty angry, grumbly, walking around like bears with sore heads,” Farrell said.

“We’ve had a couple of meetings and they understand the reasons why, as individuals and collectives, certain things happened.”

That spells it out for me nicely as to where the group is ahead of this vital second test.

Ireland are ready to rock in Melbourne this Saturday.

Let’s have a gander at the teams; 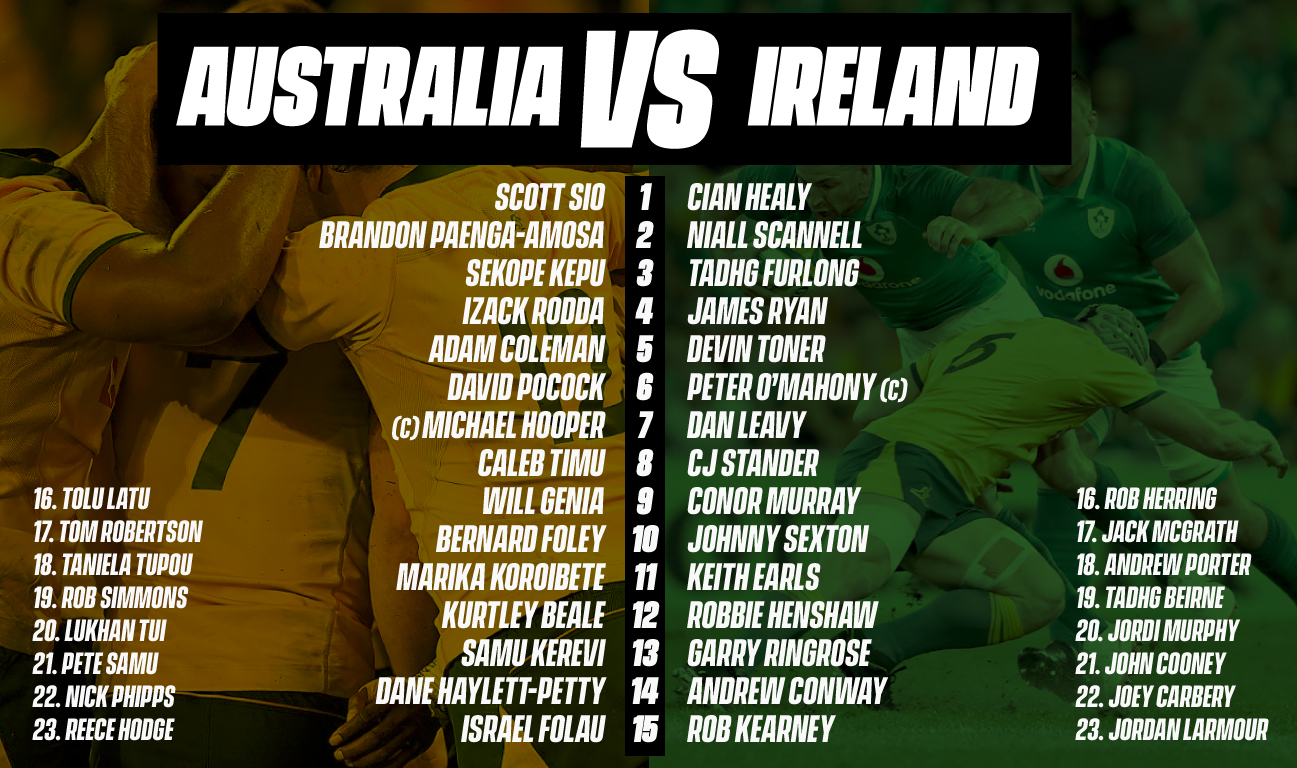 As far as Australia are concerned, they are completely unchanged from 1 to 23. Michael Cheika has named an unchanged Australia line-up for the first time in his four-year tenure for the second Test.

This is the only time that Chieka has named the same matchday squad in consecutive Tests since November 2014. That’s forty-six tests. It would seem that the Australian coach liked what he saw last weekend and why wouldn’t he? They retain a 6/2 split on the bench, which will be quite important for them based on how Cheika will probably read the Irish selection.

Based on the teamsheet laid out for Australia vs Ireland Game 2 with notes based on last week’s performance. Improved ratings are marked with a bold underline.

The biggest change for Ireland – and probably the most unexpected – was the inclusion of Niall Scannell from the start instead of Sean Cronin.

Schmidt said of the decision that – “We’re giving him another opportunity to impress, with Niall – he’s a good scrummaging hooker and that will add a little bit to an area where we weren’t as strong as we normally are.”

That reads as a fairly direct criticism of Sean Cronin and Rob Herring, given that there were two specific events that occurred at the scrum where most of the issues can be seen at hooker.

Here’s the most notable one and, for me, Cronin is under a fair bit of pressure from the initial set.

Normally when you see a hooker moving up and down and losing his bind on a slider like this, there’s massive pressure coming through on him from the opposition hooker and tighthead. You could equally argue that Australia walk around the corner on this one – because why would we wheel the scrum here? – but they get the momentum on the shove with the direct pressure they manage to put on Cronin and, as a result, Furlong. That spins us around and while the referee gives no verbal reason for awarding the penalty that we can hear on the mic, we were painting a poor picture with the way we shear off this scrum initially.

The biggest lesson I’ve learned in my new job so far is that refs reward dominance more often than not when it comes to scrummaging and we didn’t look dominant here.

It wasn’t just Cronin, either. The same happened earlier in the game after Stander was held up over the line.

Niall Scannell has had a lot of injuries that have slowed down his international progress this season but his power in the scrum has been a constant throughout the season. He’s absolutely excellent at maintaining pressure as he lifts his leg to strike for the ball and exerting maximum stress on his opposite number when they try to strike.

Most of Munster’s big scrummaging moments over the past 18 months have had Niall Scannell as a vital component. He can do the same for Ireland in this test to give us the kind of platform we need to work and be a destructive weapon like it was here against England in March.

It also gives us movements like this, which we absolutely will bust out against Australia on a centre-field scrum if we get a good platform.

If Scannell does well alongside Furlong and Healy here, he could put himself right into World Cup contention. No pressure.

The biggest talking point in the aftermath of Ireland’s loss last weekend was the impact of David Pocock and Michael Hooper. I went over how Ireland can fix that breakdown issue in detail here but there are a few other methods Ireland can use to tighten up our work in building multiphase pressure on the Wallabies.

In general, Ireland construct their phases in pods of three forwards with a heavy midfield carrier (or Rob Kearney) acting as the “ninth forward” in a lot of our attacking sets. 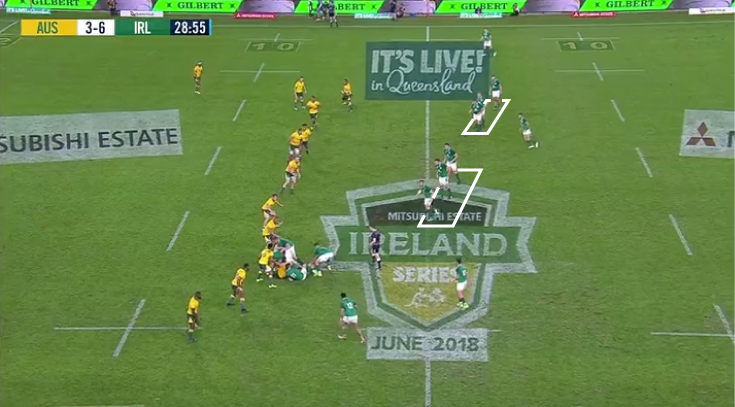 This gives us multiple phases to work with up the middle of the pitch with wide options if need be as creative players float around the pods. When one pod hits the gain line (with tip-ons to add value), the next phase is already in place while the previous pod will have already reset on the other side of the ruck. That gives us multiple vectors of heavy attack to dictate the tempo and shape of the game – like this;

The alignments you see in the images from the Australia game are a little wider than Ireland usually use in a Tier 1 game and that, for me, was down to our ball carriers. We didn’t have enough elite ball carriers to earn Australia’s respect close in so we spread our pods across the pitch to have more space to work with.

That was a relatively high-risk strategy against a team with double opensides and it cost us a few ruck balls that we really wanted and lead us to run out of dominant carriers a little too often. Normally, we like to cycle through Ryan, Leavy, Healy, Stander and Furlong with others popping up when needs be. Against Australia, we only had Stander, Ryan and Henderson (who looked off) so our alignment played into Australia’s hands in a lot of ways.

Even our screens – usually a strength of ours – didn’t have the same effect. 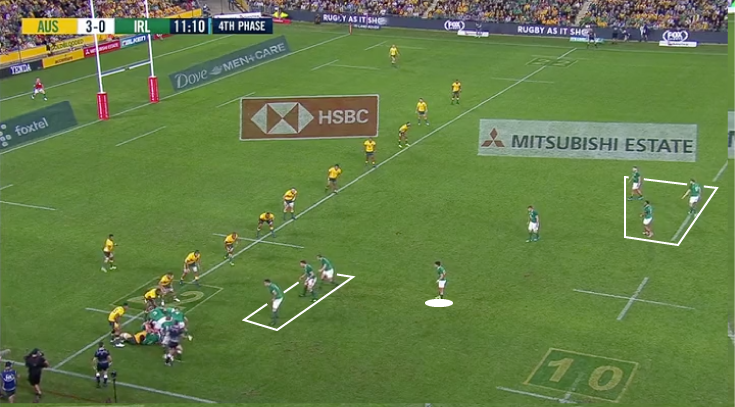 The setups were the same but Australia didn’t have the fear of our close in work. For me, our pods are a little too spread out here. Yes, you don’t want your 10 running into your own players but unless we were planning a kick move on this, it seems a little “flat”.

On this play, Carbery was floating around the back of a screen with good space to work with and Aki/Herring as outlets right by the edge of the Wallaby defence. 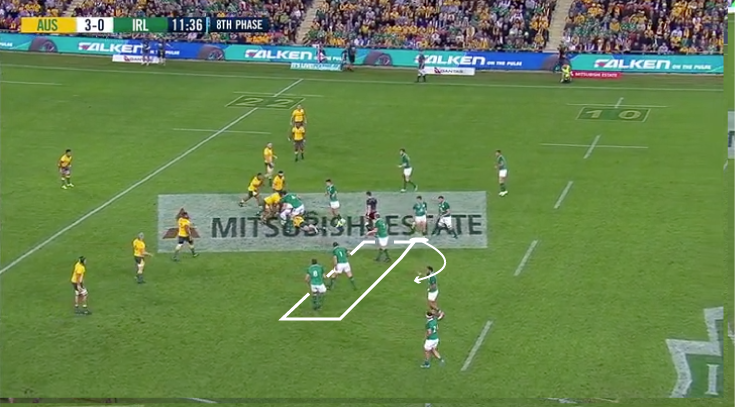 That’s a scrappy enough pull back from McGrath but Stander isn’t really selling this as well as he could either. Hooper can gamble on Carbery and while the flyhalf does well to not give up a man and ball, we get clattered around the corner. Look at the panicked line of Koroibete and Folau – we could have used that to generate positive angles to attack outside shoulders.

Better accuracy here and we were in business.

We caught Australia like this – hitting one phase open and then back blind immediately – a few times;

With bigger forward pressure in the middle of the pitch, that’ll be an even bigger option in the second test.

Ireland will have to attack kicks much better in this game but our defence under the high ball is even more important. That might be a nod to why Conway gets the nod at #14 for this one. His aggressive chase will be important on our box kicking, as is his ability to “spoil” the ball if he doesn’t get it.

You can see the sequence if our scrum gets on top as we’re planning.

We didn’t defend kicks well on Saturday and I’d expect Australia to go after us in the air again. I still think that we can target Koroibete in the air and on the turn but that will only happen if we can create a kicking lane for Sexton through – you guessed it – forward pressure.

Sexton’s Leinster gambit of the crossfield bomb in the 22 works because of the narrowing effect that Leinster have on opposition defences. If we can do that against Australia, you’ll see Sexton getting Kearney and Conway chasing openside bombs when it’s on.

In phase play and off the set piece, I thought we handled Australia quite well bar two big errors.

The mistake here is pretty obvious. Foley snaps a good pass back to Beale and if Henshaw lands this tackle, Ireland have a huge moment. When he misses, Australia almost score out of nothing.

We had this one all lined up before the pass. 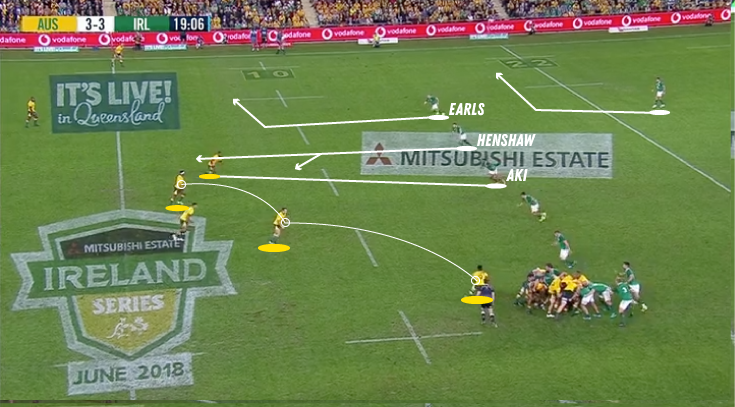 Aki was covering the decoy option, Carbery had Foley, Murphy was on Folau’s line off the scrum, Earls and Kearney were covering the wide option so that left Henshaw with a straight smash on Beale. We’ll have videoed this to death but Robbie slips off the tackle.

On Saturday, Australia will try to use the same tactic on setpiece but they’ll switch Foley and Beale when Ringrose is at 13 because of Foley’s footwork and acceleration.

Australia like to slide Foley to the edge on certain phase play options where he can slip behind a wide-screen to attack space. 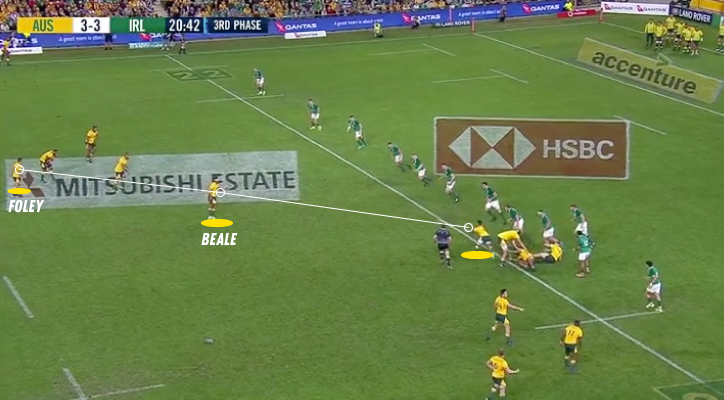 This is where Beale is invaluable to Australia as a passing and kicking option. Ireland can’t go too hard on the blitz because of Beale’s qualities. That puts Foley into a dangerous position to hurt our edge defence with his pace, step and snappy passing.

Munster will try to use Carbery in the same position next season.

If Ireland are to save the series, we’ll need the forward pressure I spoke about but also improved accuracy on our set-piece strikes.

This one, for example, was down to a blown line and pass;

If this goes to Carbery rather than dropping into Earls’ hands, we’ve got Carbery, Earls and Stockdale surging around Australia’s edge defence with Foley dropping into the backfield as a second option if we get tackled.

Using as many 7 man lineouts as possible will be the key for us from touch. Toner will add to the maul from a ballast POV but it also was our best way to get at Genia and Foley on the first phase.

Expect to see this exact same move with Leavy peeling from the front of the lineout exactly as Murphy was here;

Except for this time, you’ll probably see Leavy have a cut off Foley and Beale with some low gear, high impact carrying.

On the next phase, you’ll have anyone of Furlong, Stander, Ryan or Healy to have a pop. Rinse and repeat that kind of strike and we’ll crack these lads yet.

It won’t be easy but with heavy rain forecast for kickoff, expect a real slugfest.

There’s a storm coming. Literally and figuratively. Let’s see where we’re at.