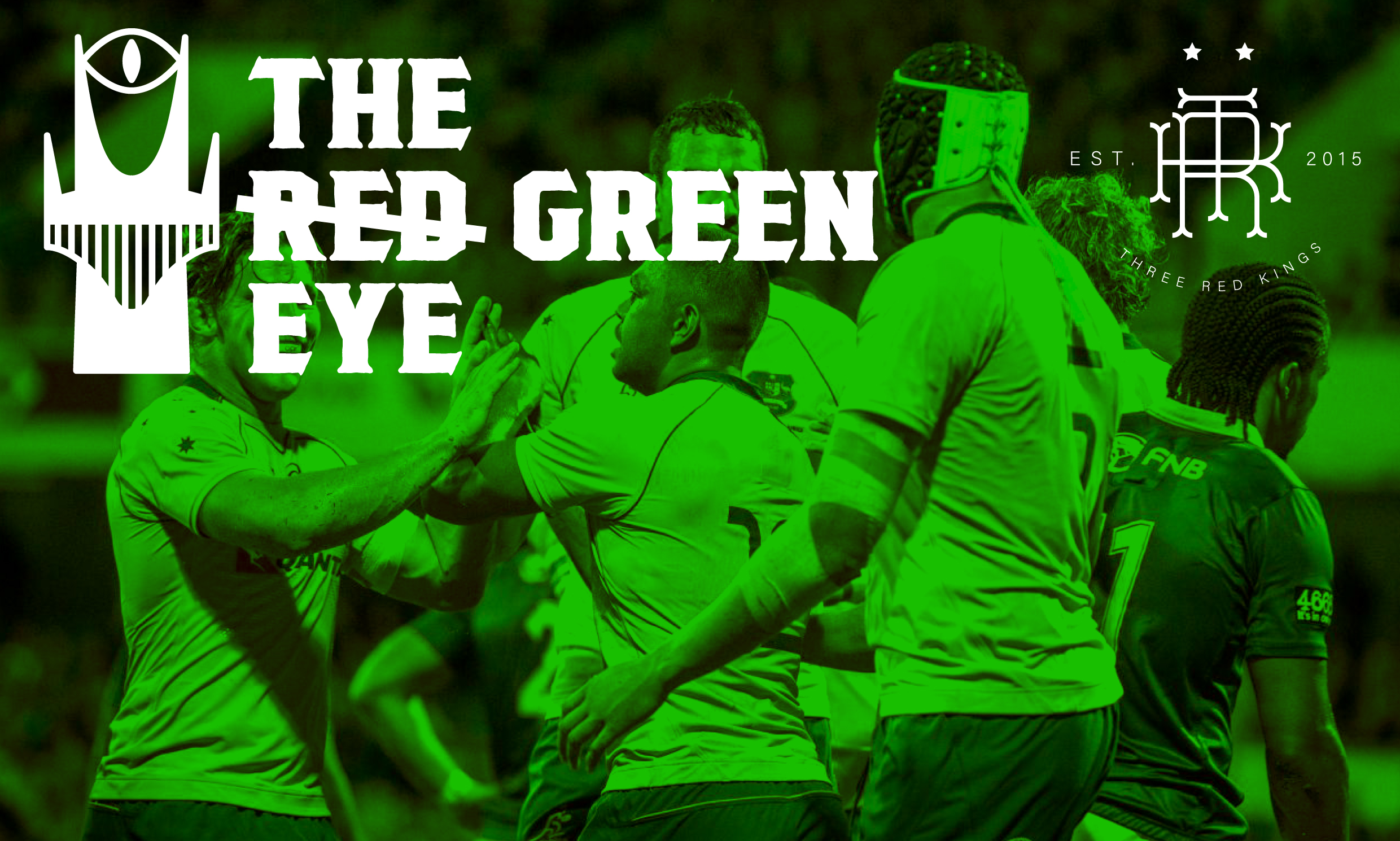 Given the relative trajectory of Ireland and Australia over the past few years, you could be forgiven for harbouring that strangest of Irish hopes ahead of a tour down south – optimism.

Don’t listen to anyone who tells you that Ireland are anything but solid favourites to win this series in Australia. Winning a Grand Slam and going unbeaten in 12 tests makes it hard to play the underdog card, despite that card being a historical favourite of Irish teams going back to the year dot. We have multiple test Lions, multiple recent Heineken Cup winners, and a solid stable of reliable, experienced test match operators coming on this tour. We’ll be facing a Wallaby side that has a few injuries, a few areas lacking in experience and an iffy run of form as of the last few months, albeit with an elusive win over the All Blacks tucked in there like a €20 note in an old coat.

This is anything but a nothing summer tour. Ireland have a very strong touring squad – about as strong as we’ve ever managed – and this three-game series is as good an opportunity as any for this group to prove to each other that a Rugby World Cup win in just over a year’s time is possible.

Let’s look at the teams for the first test; 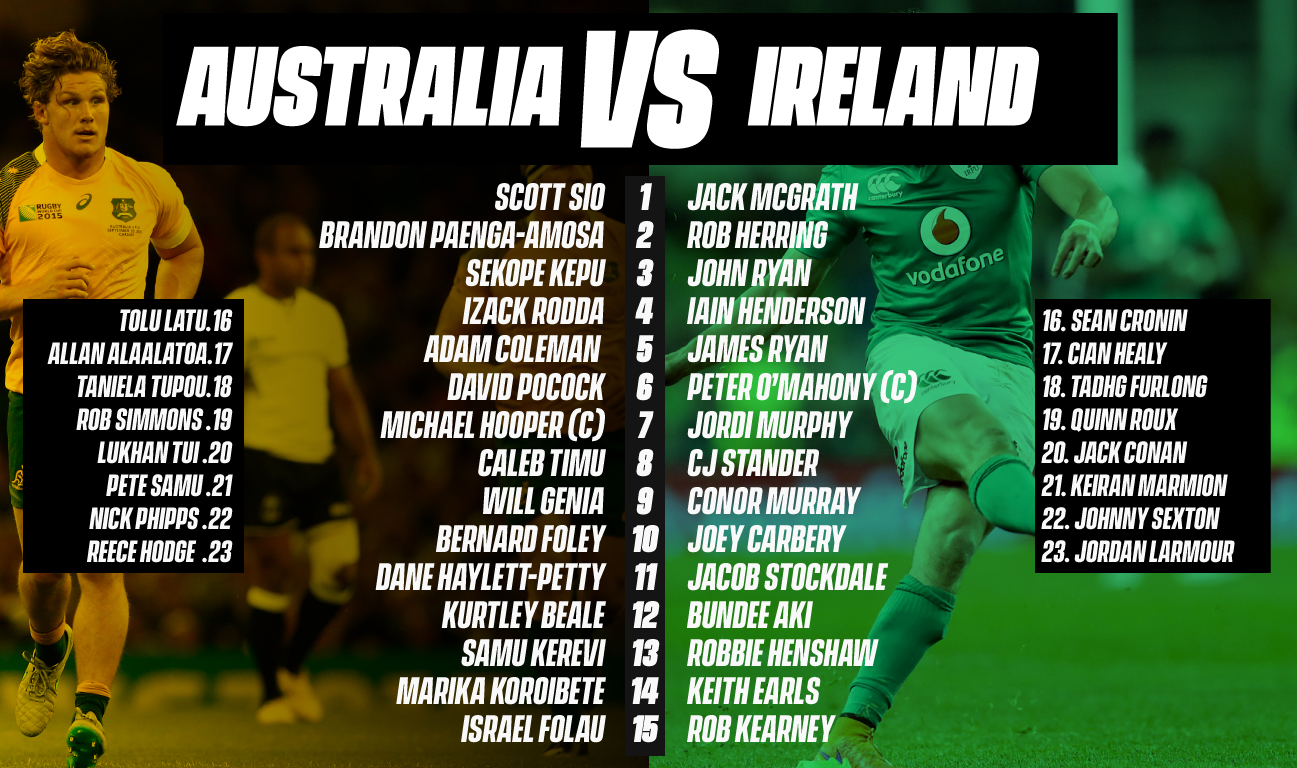 Based on the teamsheet laid out for Australia vs Ireland Game 1.

Chieka’s back row selection for this game gives one area of attack that Ireland would be foolish to ignore. The lineout.

Australia have gambled a little by selecting a back row that has no recognised jumping option in it. Pocock and Hooper are two excellent opensides and Timu is certainly a strong running, hard carrying back row but there are no elite jumpers in that group. That means that Australia will be limited to two main outlets with a test rookie at hooker on their own throw, and one likely counter jumper on Ireland’s throw. There’s real potential for Ireland to attack here, on our throw and theirs.

That isn’t to say that Australia will stick rigidly to hitting Coleman – their likely primary jumper – exclusively. They’ll get Timu on a few jumps with schemes like this, with a lock providing a lateral screen;

You can see the All Blacks scouting this in the play itself, through the long road that Scott Sio had to run to complete this lift and Whitelock managed to get a tap away in front of the jumper. You’ll see Timu going up in this position, or right at the front.

They added a wrinkle to this scheme against England a few months after Bledisloe 3 – with Sio travelling a shorter distance around the decoy jumper – but the outcome was still the same with the Australian loosehead giving the game away to the tail jumpers.

The disruption Australia have had to their lineout over the last few months – different hookers, unfamiliar jumping roster – have meant they’ve taken to using a few classic shortcuts in arranging their set piece.

They tend to use the walk-up trigger as their main lineout ploy. You won’t really see Australia use a lot of lateral movement – mainly because it’s hard to shuffle two primary jumpers and their requisite lifters over the course of a game – so they walk up to the lineout in their approximate jumping positions and use their arrival to the line as the trigger for the throw.

This makes it easier for the hooker but it does increase the chances of a blown throw and makes the idea of a spoiler at the front of the lineout – enter Peter O’Mahony – more attractive to the opposition.  Why? Because if the throwing team call the lineout in advance based on their walk up positions, it’s harder for them to adjust the call on the line. That means a spoiler like O’Mahony at the front can “choke” the opposition lineout by forcing their jumpers to operate in the middle and back of the lineout. That can get the likes of Henderson into play in the middle and Ryan from the middle on towards the back, as well as putting pressure on a newbie hooker to make shaped and timed throws at pace and under pressure.

When Australia are under pressure in the lineout, they’ll generally go to Coleman – so understanding their walk-up trigger can give you a close guide to where they are planning to throw to.

They can use Hooper and Pocock as jumpers on certain gimmicked schemes, like this reverse play;

Given the supposed inequality in the Australian lineout, I can easily see them pulling out this move against Ireland. Genia got spoiled here but the idea was to swing those three players around the corner with the All Blacks heading off to number up on the large group of Wallabies on the tail.

This is the trigger; 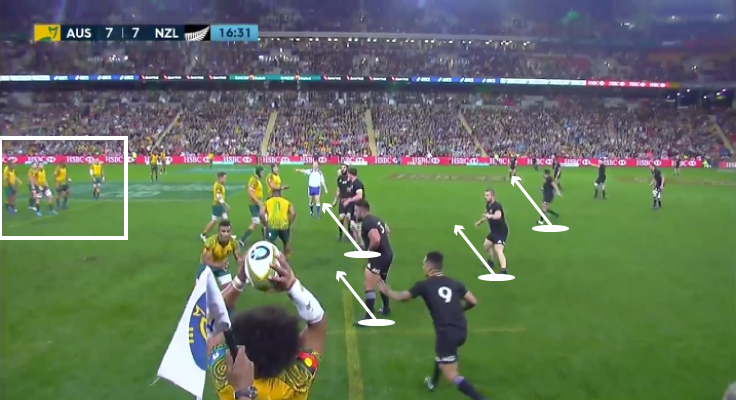 They’ll use a four-man lineout with Hooper/Pocock as the halfback and stack a group of six at the tail to draw defenders into the 10 channel. They’ll then break back against the grain to attack the 5m channel.

On Ireland’s throw, the main threats on the counter jump are Coleman and Rodda. You’ll see Timu at the front occasionally but if Australia look to jump against Ireland, they’ll be super dependent on their two giant second rows. That means they are vulnerable to this kind of action on their lifters;

Situations like this are exactly where having no real back row jumpers comes back to bite you. Both of Australia’s locks need two lifters and that means they’re a little easier to navigate around – follow the three-man pod, disrupt the lifters and you’ll generally get clean ball. Having four legit jumpers (plus Stander, who’s a more than decent jumper these days) and you have a tough puzzle for Australia to crack if our timing is right.

Once you get the ball down, Australia’s lack of size in the back five means they can over commit to mauls – for good reason. Look at how England drove Australia here once they threw over Coleman.

That weakness in their game can lead them to throw a lot of numbers into mauls too early, which can expose Genia and Foley on the flanks and misalign their midfield defence.

This is the ideal scenario from an Irish perspective off a maul feint; 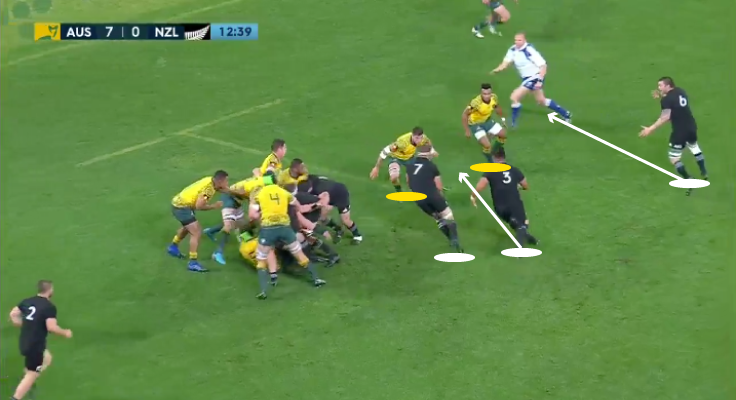 You can see Ryan swivelling the ball around from the back of a maul to Stander coming around the corner with Pocock/Hooper and Genia exposed like this. A better option from Cane in this instance would have seen Squire getting the ball here and running in a handy one. Look for Ireland to tie up Australia in full, seven-man lineouts as often as possible to generate “against the grain” running options for Carbery as Pocock and Hooper shoot out from the tail.

With the lineout being a big part of Ireland’s prospective attack, our kicking game will be important. Can we manipulate Australia into giving up poor exits? Can we pin back their wingers and force them to kick? This will be the challenge for Carbery, but also Murray.

If we can draw Folau out of the backfield on midfield box kicks, we can expose Australia on the wings as long as Folau doesn’t claim the ball cleanly.

The play here was to repeat the kick over the top once the All Blacks had the advantage. Australia often play with just two men in the backfield, with one of them being Genia covering in the secondary defensive layer in the middle of the pitch. That 13/2 line becomes more apparent on multiphase sequences between the 22s.

That high line means their wingers have a lot of decisions to make in a game and England took massive advantage of that in Twickenham last season, in the loose and off the set piece.

Look for Ireland to target their winger’s turning speed with grubber kicks from 9/10 in particular.

Expect to see Australia lining up with a 1-3-3-1 forward shape in this one, with Hooper and Pocock as outlets on the wings on reverse plays. It’ll look a lot like this, in general.

Australia will use a lot of screens on big openside plays with Beale and Foley swapping at first receiver. They can get a little predictable in these, but that’s only because they want to get Foley’s pace working further out where it can be more threatening.

A high blitz, like England used here, can force Beale back inside as his pace and stepping ability aren’t what they used to be – as classy a player as he still is. Foley getting his hands on the ball outside of Beale is a dangerous proposition with his pace, especially with Folau, Kerevi and Koroibete as finishing options.

Australia have incredibly good hands on set plays off scrum and lineout, as well as ultra-precise lines of running to get Marika Koroibete onto the ball at a good angle.

They’ll be a constant danger in these kinds of scenarios.

Australia will also try to exploit Keith Earls height on cross-field kick options for Folau and Haylett-Petty, so that’s something that Ireland will have to mitigate against with numbers more than anything else. Kearney and Henshaw will have to keep that option in mind when Australia looked camped on Stockdale’s side of the pitch.

If both teams play to their ability, Ireland will probably win, especially if we can manage Australia’s exits and pressure them into a game they don’t want – one focused on scrum and lineout. We should have an advantage in the scrum from the start and the bench transitions but that’s far from a given going on Australia’s recent improvements in this facet of the game. If Carbery – assisted by Murray from the base – can manage the game from the boot, we have the firepower to hem Australia in and force them into making big plays.

If we can bring the kind of ruck pressure we have brought in attack over the last few months, we can keep Pocock and Hooper out of the game and slowly crank the pressure up on Australia. They’ll be looking to get their double opensides into the game, so we have to stay narrow and resourced in our forward carries.

A scrappy shot out wide will bring those lads into the game over the ball so we want to make sure we’ve always got two big clean out men getting our ball secured, even if that means trucking it in a zig-zag around the middle of the field until we can find a few metres.

If Ireland can keep up that phase pressure and back it up with accuracy from 10/12/13, the win will come.