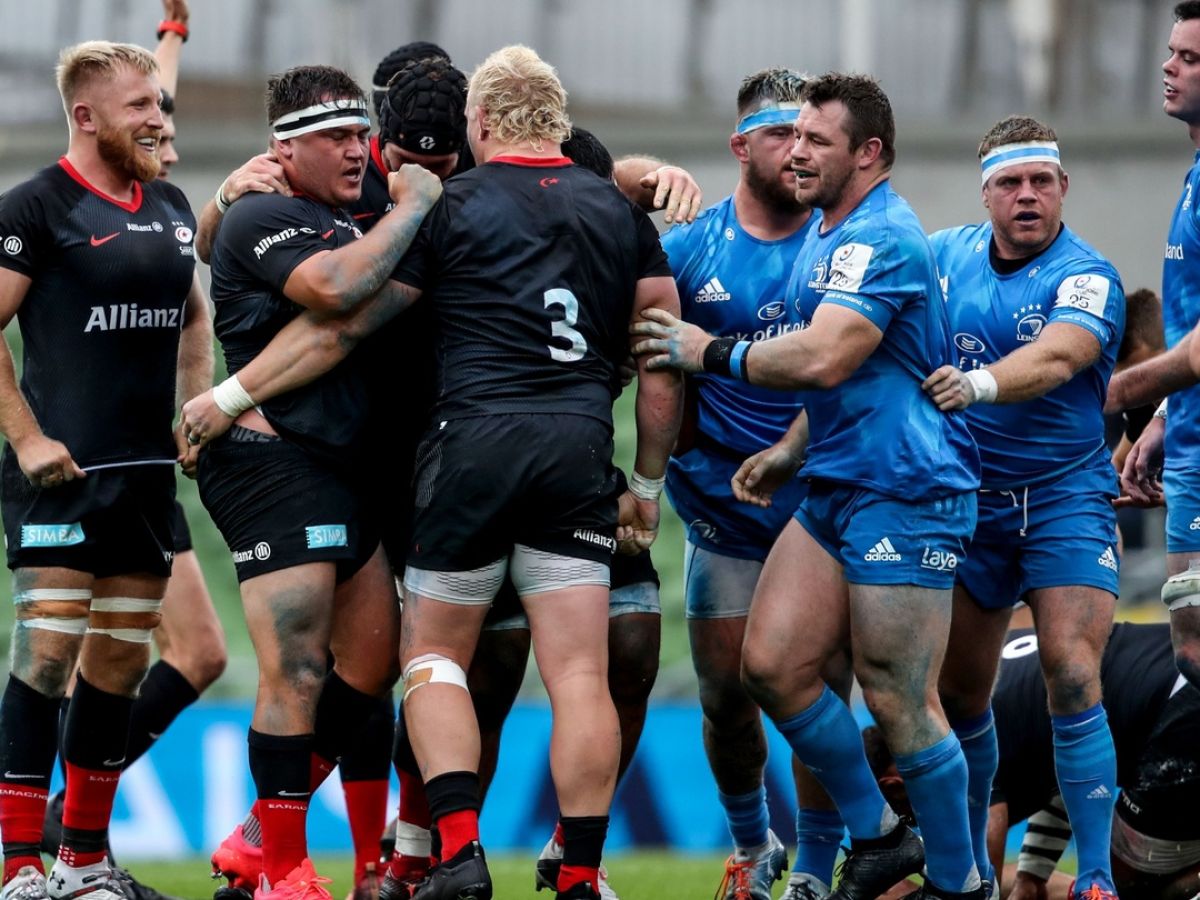 Leinster's loss wasn't a shock if you knew what to look for.

By Tom Savage5 min read
In videogames, even the most vicious, dangerous boss has a tell that, once you see it, gives you an “in” to beat them. Shoot the joint in the armour to expose the soft underbelly and then strike for massive damage. When you finally spot the glowing red dot that tells you where to aim, it’s over. For Leinster, this glowing red dot has been their backfield’s work under the high ball and their difficulty in resetting after the kick since rugby restarted.

It’s not just taking the kick in the air – that’s only half the job – it’s what you do after. This will be familiar to you because I’ve been writing about this for weeks now. Munster went after Leinster here repeatedly two weeks ago but didn’t have the firepower to capitalise. Ulster did the same but then went away from it, to their detriment. Saracens used the box kick to pressure Leinster, force errors, burn their carriers on the gainline and then mop up the return. When you combine that with Saracens near-complete dominance at the scrum, every single high ball became a potential penalty.

I’ll put it like this, Richard Wigglesworth kicked the ball 15 times according to ESPN. To put that into perspective, Conor Murray box kicked 12 times in that PRO14 semi-final. Both did so to generate the same picture.

Leinster consistently coughed up knock-ons, unmanaged loose balls, clean takes and found themselves planted back into weak positions into a Saracens defence that was winning collisions every other phase.

It wasn’t just about winning the ball or not winning it – Saracens were confident of killing Leinster’s transition and dragging them into dead phases.

Have a look at Saracen’s work on this kick chase and keep track of the ground Leinster get on their eight phases of possession before kicking it back – hardly anything.

Three phases in, Leinster need McGrath or Sexton to get this ball to the tramlines because Saracens are comfortably stopping up their carries with 12 defenders in the primary line. 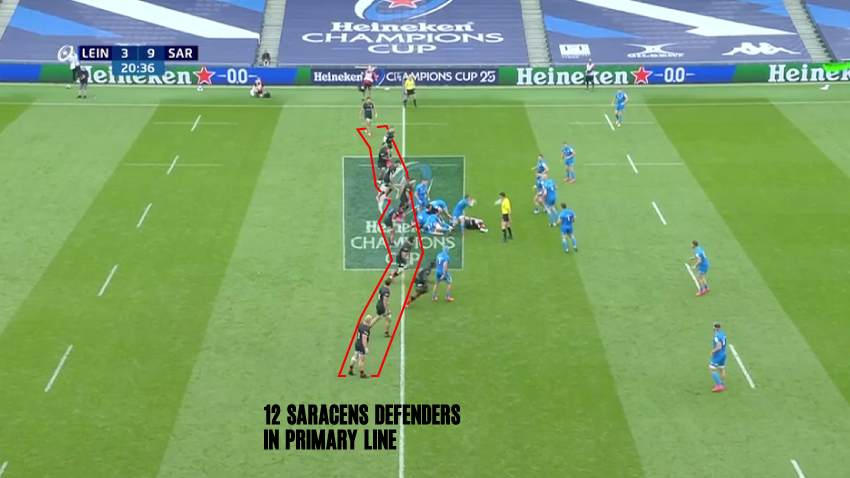 They have wide coverage at the bottom of the screen and Daly/Goode covering the backfield. Everything Leinster are doing is happening inside this defensive “umbrella” and Leinster are losing three players to every ruck – Saracens are losing two, max.

When Leinster eventually kick it back, Goode takes the ball cleanly before Wigglesworth takes one phase to get into position through Vunipola and then…

… Larmour coughs up a knock-on under pressure. Saracens have earned 20m of territory with a scrum possession on the halfway line while only making two kicks. Leinster struggled hard on eight phases for zero gain. Saracens backed their physical advantage – Munster backed their breakdown threat – to hurt Leinster’s setups and force a kickback on their terms. The right pressure aimed at the right place at the right time.

Look at it again here;

Leinster won a penalty at the end that gave them the launch point for their second try but I think Wray would argue that he’s got a legitimate argument for a jackal penalty right at the end. Saracens rarely played a whole load of rugby in their own half of the field and launched like this to keep moving forward as Leinster were turned, turned and turned again.

Ultimately, Saracens are pressuring Leinster with box kicks but McGrath/Gibson-Park can’t do the same in return.

Sooner or later, that will catch you out when you’re playing against a bigger pack.

If you’ve watched Leinster for any length of time, you know that the majority of their set-up play happens with tight interplay between the forwards. The key is to make them play this way with a territorial disadvantage (after a box kick pins them into their own half) and to then attack their ball carriers and suck numbers out of the line. Saracens did this by hammering Leinster in contact to draw in numbers to the ruck and Munster did it by menacing the breakdown after the tackle. Both produced the same effect and it was generated in the exact same way.

Saracens even box kicked in the Leinster half, beyond the 10m line. Why did they do this?

For the same reason that Munster did; essentially, why burn carriers when you can kick to create an unmanaged transition point? This ended up being brought back for a Leinster scrum – danger – because Larmour couldn’t dominate the aerial contest but the ball could have easily popped straight into an oncoming Saracens player who’d have a highly disrupted Leinster line to attack.

This tactic was less of a concern for Leinster historically when they had Rob Kearney (and, to an extent, Dave Kearney) dominating the backfield. It isn’t that he never made mistakes – he plainly did – but on most kick receptions like this during his prime, he tended to boss the receipt and set a strong ruck point after. He didn’t always score a highlight linebreak or try on the counter, but he did secure the ball, set a good target for his forwards and prevent Leinster from being territorially pinned.

Why is Larmour coughing up these opportunities?

For me, he consistently attacks the high ball from an oblique angle, not directly on the line of the box kick. 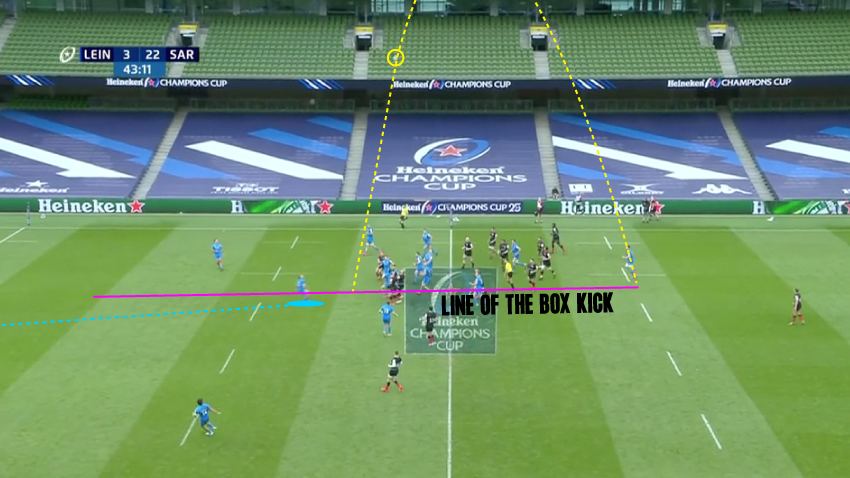 Why is he doing this? Well, the defensive scheme has him in a central backfield position that you can ascertain by the line of his attack on this ball so he’s reacting to the box kick’s direction rather than positioning himself in line with the kick from the moment it was kicked.

When Larmour comes to attack the ball, it’s already wiping across his body. 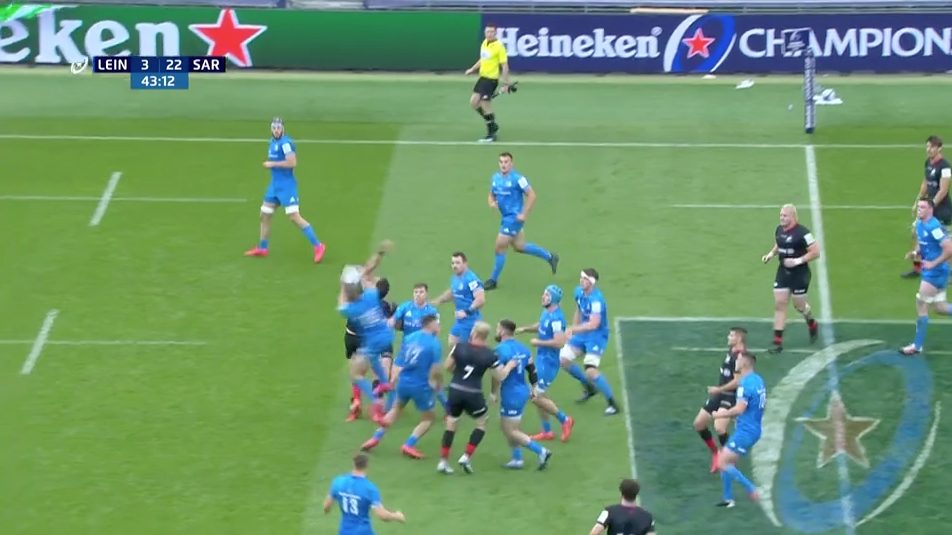 Instead of attacking the ball with his core facing through the line of the ball, Larmour is already in a weak position. This comes down to positioning and, I think, Larmour backing his speed to get him from the safest guard position (central) to the danger point (the kick receipt). For me, the full-back has to stand closer to the line of the kicking player and try to balance your depth between the safest position – deep, central backfield – and the best position to attack kicks, which is closer to the tramlines and closer to the defensive line.

Right now, Larmour is backing his speed to bail him out of the safe position and it isn’t working.

You can see that same deep, oblique attack angle here;

I’d like for Larmour to attack this kick from a flatter, more direct line. The light blue line shows the line Larmour ran on the way to losing this aerial contest. The dark blue line shows where I think I’d want him attacking the kick from. 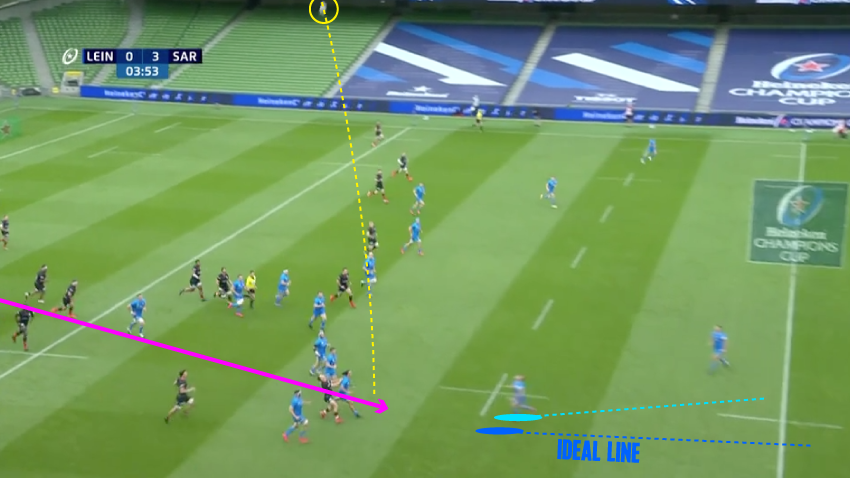 It’s not just about catching the ball, it’s about making sure your positioning is ensuring the ball isn’t wiping across your body as you attack.

Until Leinster figure out their backfield coverage and clean up their work in the air, this will be a weakness that teams will look to exploit.

Ulster did half a job, Munster did the first part and couldn’t take advantage, Saracens did it all game long, followed up through the forwards and pressured Leinster into their worst Category 1 performance in four seasons.