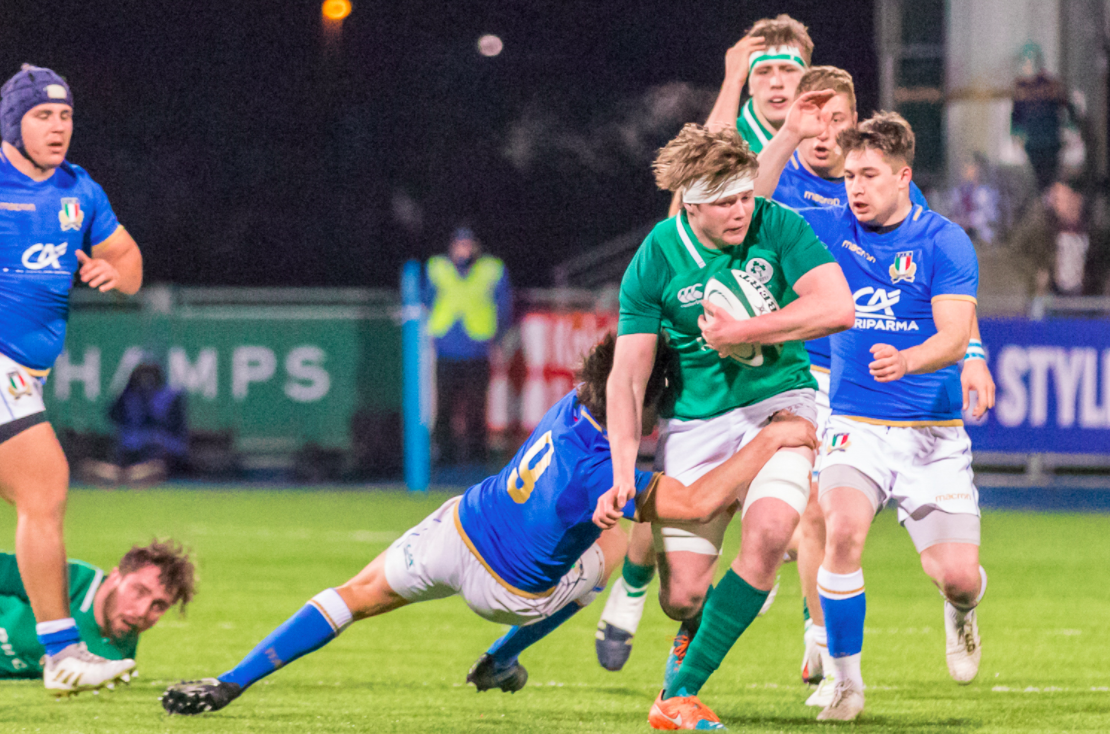 The GIF Room :: The Young Maul

The maul is probably the toughest aspect of the game to coach at a national underage level.

You need cohesion, reps on the pitch, some semblance of settled personnel and the “bandwidth” to really focus on that part of the game. In the short time that the Irish u20 setup has with the players as a group and individuals, it can be incredibly difficult to get the time you need to focus on the different sides to the maul on either side of the ball.

In a lot of ways, what happens on the pitch at this stage of a young pack’s development can be a hugely beneficial learning experience for them. Let’s have a look at how they got on against Italy, who looked to be a proficient mauling side, on their own ball at least.

Ireland’s attacking maul was pretty decent overall, but there were a few issues that I saw cropping up that they’ll learn from, especially against an Italian pack that was down a man from the 9th minute on.

Here’s the first example – let’s look at the setup.

If I was to nitpick, I’d be looking for a little more certainty from Green #5 (you see him lose his feet a little before he locks in for the drive), a little more pace from Green #3 to beat Blue #4 to the bind and push, and a stronger base on the drop from Green #4.

You can see Italy choosing to stay on the floor for this one and they get the initial reward with a good counter-shove to start off the set. Keep an eye on Blue #5 (red scrum cap) trying to pull our front lifter out of his position.

Italy are, physically, a bigger team than Ireland so we needed some clever gimmicks to make ground on them in this scenario, even while down a man.

The key player in Italy’s maul defence here is Blue #4 – Matteo Luccardi – who is massive for his age and very well developed physically. He makes a massive defensive surge to prevent Ireland getting a clean ball transfer but makes a key error thereafter.

His initial shove is fantastic but, crucially, he loses his shape at the end of his shove and removes his weight from the counter.

What happens afterwards is the key moment from an Irish perspective and it comes from Green #3 – Jack Aungier – who had an impressive night out in this game.

Look at Aungier grab Blue #4’s left thigh to leverage his push through right when the pressure from the Italian lock forward eases off.

Green #6 get’s a good lean on this movement, and Ireland get some good technical mauling in place to make ground; look at the straight, low backs in the drive.

Let’s have a gander at another attacking one;

Let’s ignore the Italian’s jumping across the line here and focus on Ireland’s work. It’s a good take and brace by Green #5, even if the peak of the ball and jump could have been timed a little tighter. A maul begins at the throw, as far as the timing of it goes, and the longer you’re in the air, the longer the opposition have to time and then counter your shove.

Unlike the previous maul, Italy went into the air to challenge. There wasn’t very much deceptive movement in the lineout from either side in this game, so it became a bit of a race into the air on a lot of throws. Ireland’s throw pattern here was quite simple – a two jumper option prior to the throw – so Italy fancied a cut off them in the air. 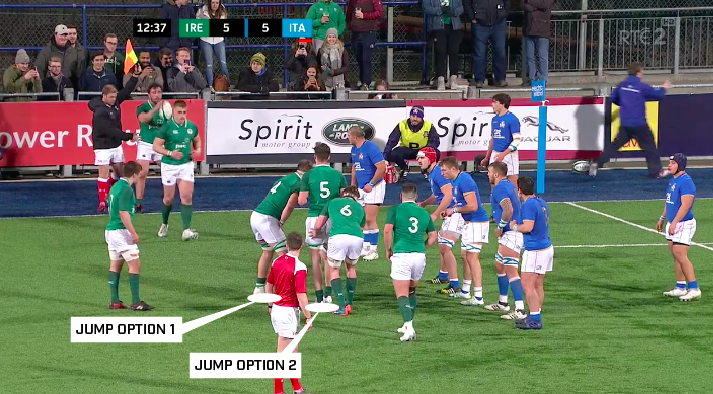 Green #6 is a potential option here too, I suppose, but Italy figured that Green #4 or Green #5 were the more likely targets, given that Green #6 had been a lifter on the previous maul and targeted their jump at the most obvious jumper.

On landing, Ireland get a good setup, aided by Italy’s counter jump killing three of their maul defenders.

When you see a setup like this, it’s almost always a good sign for the attacking side; 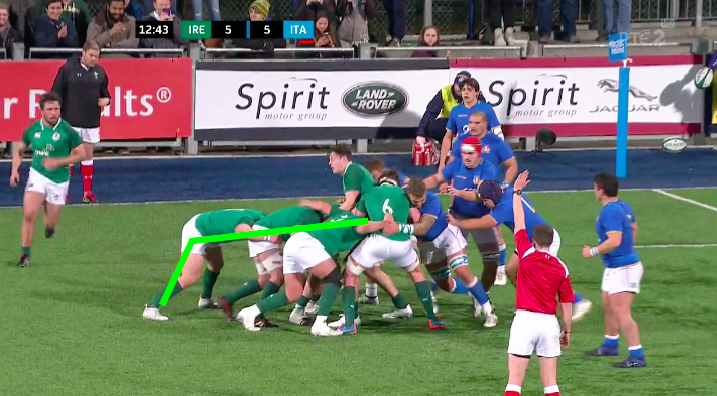 Italy have two engaged defenders against six bound Irish attackers, and to top it off Ireland are in the power position – low body angle (although not 45 degrees) tilted slightly up into the defence in the perfect “push” position, almost like a scrummage.

What happens next is predictable;

Ireland jogged Italy back into their own 22 with great dynamism.

Overall, this is very good though. Green #6 and #3 do very well on the infield side of the maul and when they get broken away, Green #7 steps into the front seamlessly.

When it gets to the first stop, we probably took a little too much out of it and allowed Italy to recover well on the second shove.

When the ball comes out, Italy have recovered to the point where they’ve got good numbers on the infield side of the maul. It didn’t matter anyway, as Ireland scored a few phases afterwards but these two mauls showed some of the good work that Ireland are doing in attack and the bits that will only get tighter as they develop.

For me, the biggest issue came on maul defence. Looking at Italy’s maul, you just wouldn’t know that they were down to 7 men in the pack. A lot of that is to do with their conditioning – they’re all very big young men – but it also shows that they’re a side that leans heavily on their maul in training. Ireland’s forwards are generally smaller, quicker and more rounded in their work around the field. Italy seem to have put way more emphasis on the maul and scrum at the expense of their handing and work around the field. There’s nothing wrong with that, of course, it’s the style they’re going for and more power to them.

Let’s have a look at the first example;

The first thing you spot – Italy are quite a bit more dynamic in the air than Ireland are. Blue #5 (red scrum cap) takes the ball cleanly on the top of his jump and bosses the space as he comes down. This is your classic “strong” jump from a lock forward in the middle of the lineout (different from a pace jump that you want elsewhere). When you take the ball on the up like this, you can use the momentum of the take to bully the air, set your grip on the ball and get a strong base set on the landing.

From an Irish perspective, we’ve gone a little late in our challenge. Italy beat us into the air quite comfortably, and we make an error on landing – turning our backs on the maul.

Green #4 spins out his jump on landing, meaning Green #6 has to fill the space that should have been Green #4’s.

That left us badly stacked on the touchline side of the maul, and couple that with the way Italy have set up here and you have a big problem. 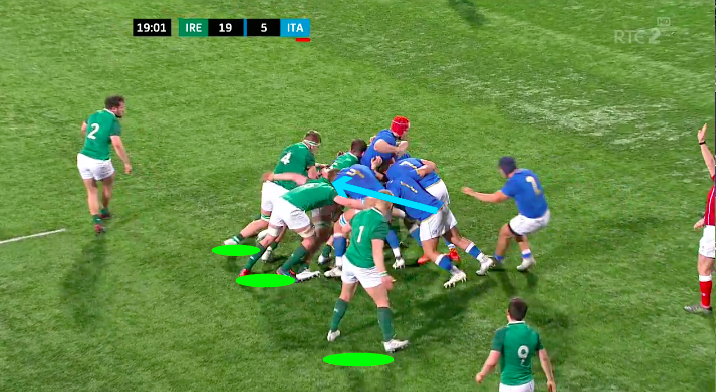 Italy aligned to shove infield. Ireland matched them but, crucially, don’t have a touchline anchor. Essentially, we need to have a man applying pressure here; 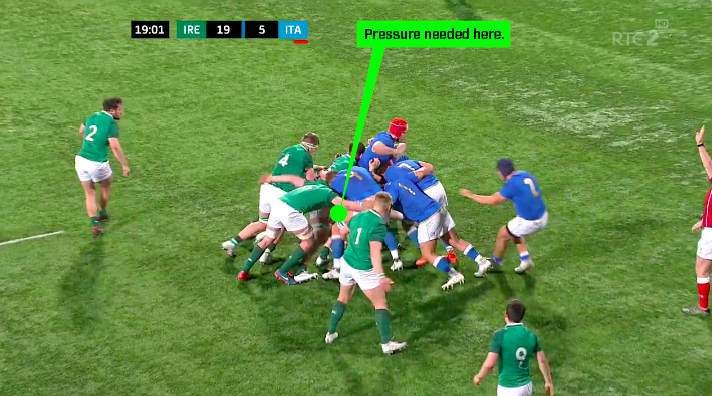 That would allow us to pinch Italy’s infield drive but, more importantly, prevent us from being swept around like this; 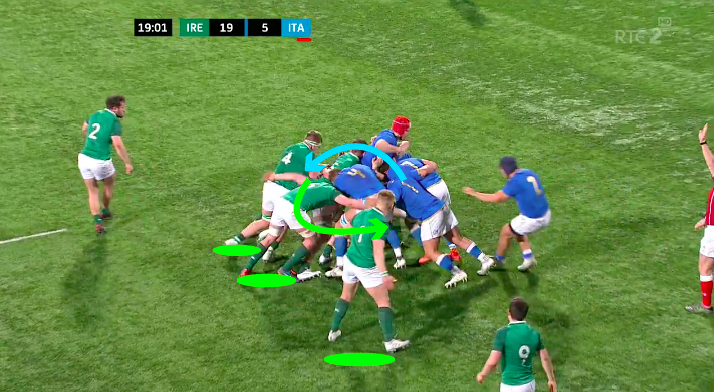 I can see Green #1’s conundrum. If he applies pressure to the maul here, he’s exposing his scrumhalf in the trams to a bad matchup with their hooker or another forward and, as far as he can see, Italy are angling away from his area of the pitch. He stays out and Ireland get swept and then driven back by the Italian breakaway.

You can see Green #4 and #3 are under massive pressure on the infield side. They weren’t helped by Green #4’s initial decision to come around to that side, as he missed a crucial opportunity to shape Italy’s maul on the initial counter-shove. By hitting Italy on the touchline side, he and #6 could have pressured Italy’s transfer and opened them up to secondary hits by Green #1 and #2.

Here’s how it played out;

It came to nothing in the end, but Italy will have taken a lot of joy from their success in this maul.

Looking back at this game, you’ll see a lot of Italy’s throws are really simple, with very little deception. This made their throw quite tempting to attack in the air. As a tactic, it was a decent one – if we’re worried about their power on the deck, you’ve got to disrupt their supply. If you try to put aerial pressure on their throw, you’ve got to make it stick.

We didn’t manage it often enough;

We took put two jumpers in the air, got nowhere near the ball and burned most of our maul defence in doing so.

That gave Italy a massive pocket to work with – look at the strong jump and the powerful forward brace by Blue #8 – and they made massive ground against an unprepared Irish counter-shove.

If you look at Green #5 and #4, they’ve been taken out of the shove by their jump prior to the landing. They can’t put power into the counter-shove and that gives Italy the advantage, even though they’re down a man. 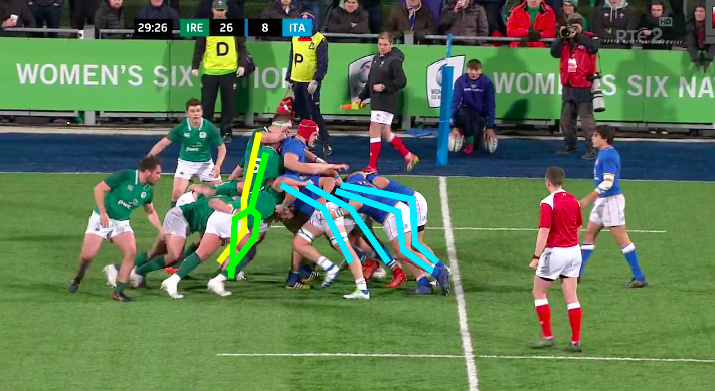 We made this exact error a few times in the game.

Double challenge in the air;

Followed by ceded ground off the bad positions following on from the double aerial challenge;

These are all elements that will remedy with time on the pitch, exposure to the coaching and physical development, which can happen rapidly as the players see the standards in front of them.

We shouldn’t forget that Italy were substantially larger than Ireland man for man, so even reduced to seven men they were more than a match for us in the maul. Our attack was quite good, but our maul defence needs a bit of work, as you might expect for guys at this level. Maul defence is the toughest thing to get right as a unit, so I expect it to improve as we go game to game.