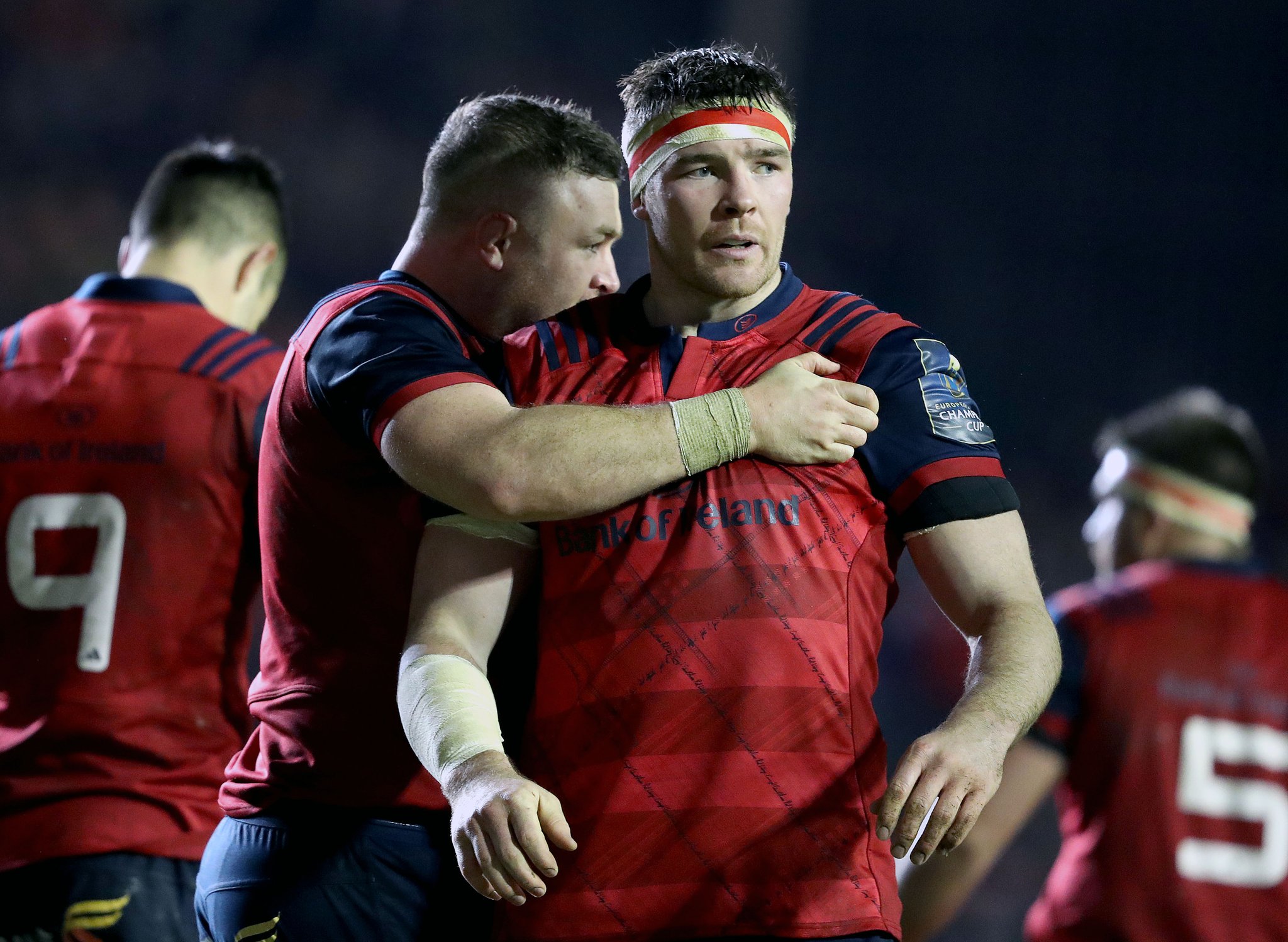 The GIF Room :: The Grind

A narrow pitch like Welford Road can feel a little like a prison. Taking on the Leicester Tigers up front in the small confines of one of the smallest playing areas in Europe is akin to slamming the cell door behind you and declaring to Cell Block H that you’re not locked in there with them – on the contrary – it’s they who are locked in with there with you.

That means some serious work in the forward exchanges and when you look at Sunday’s game, one thing runs through the entire performance – a tough as nails and endlessly ruthless forward performance. There’s enough detail in there for three or four articles (and I’ll be doing one on Munster’s attacking lineout and maul tomorrow) but this article will focus on one core aspect of the game; Munster’s defensive maul.

I’ve gone into some detail on the maul before, so some of the shorthand I use can be seen in the other articles I’ve written on the subject – mainly this one.

Let’s get down to business.

On the face of it, this looks like a decidedly strange approach from Leicester, especially considering the good ground they made in the maul a week earlier in Thomond Park. If you remember, they managed to win 7 mauls off 20 successful lineouts with one of them leading to a try but, for some reason, they went away from that tactic on a narrower pitch.

Did they feel that targeting Munster’s midfield defence off lineout possession was the smarter play with Tuilagi and Toomua back in situ? Perhaps. Either way, I thought that selecting the pack they did – their back row in particular – would have lead to a tighter approach.

That was my concern when Leicester won a penalty off a maul inside the first three minutes. Why did they only maul 3 more times in the next 76 minutes? It might have been their pre-game video work that, in fairness, identified a tendency to overfold off first phase in the lineout, or it could have been a need to get Tuilagi and Toomua onto the ball as much as possible. Whatever it was, Munster’s fantastic maul defence (using only four forwards against multiple opposition maulers) would have been enough to make the decision to move away from the maul an easy one.

Let’s have a look;

This one is an example of Munster’s technical and physical maul defence. First of all, let’s count the numbers; Leicester have six initial maulers against four Munster defenders. This becomes a seven on four in the second shove.

There are three distinct parts to this counter maul, so let’s have a look at them in detail.

The first part is The Turn (something Munster used on both sides of the ball in this game).

Leicester threw this ball to the tail, so Munster’s initial work here is excellent. Stephen Archer whips Cole around and, as Kitchener is bracing against him, this turns Tigers infield and – crucially – makes their initial power move a lateral one.

Kleyn’s counter-pull on Fitzgerald keeps the angle turning towards the midfield and, in doing so, prevents Tigers from getting any forward momentum without going for an energy burning second shove back towards the touchline.

This turning movement also exposes the heart of the Tigers’ maul to Peter O’Mahony. That usually means bad news for the opposition.

O’Mahony won’t pass up an angle like that and puts a Spike into the heart of the Leicester maul.

Peter O’Mahony is able to go through that space and lock onto Kitchener and, crucially, Fitzgerald – the Leicester ball carrier. O’Mahony gets a strong brace on the ball carrier and you can see his work actually stops the Tigers maul dead while they work out a transfer to Youngs.

This gives Archer time to circle around from the other side of the maul, as it will for Kleyn. Leicester can do no more on the initial maul and have to shear off with very little forward momentum.

Kilcoyne – who up until this point was covering the maul from the side – can now move in to cover any potential break. He won’t be needed.

Jean Kleyn cycles around to Sack the maul into next week. Tom Youngs breaks free with Mulipola and Mapapalangi providing very loose cover. Kleyn peels around Mulipla and gets a super hit on Youngs to kill this maul dead.

Technique, power, physicality. Munster stuffed this maul with two fewer players, with O’Byrne, Kilcoyne and Cloete covering from the sides and with Stander covering midfield. That’s a killer for Leicester.

This four-man unit of Holland, Archer, Kleyn and O’Mahony would be a constant thorn in Leicester’s mauling ambitions.

Kleyn comes right through the middle at the end and is close enough to almost get a sack. Leicester are forced to kick away.

This starts off as a 6-on-3 Offensive Maul. Kilcoyne and O’Byrne are in situ as touchline backup with Archer and Cloete covering the infield angle.

Let’s break it down again – here’s The Turn.

O’Mahony is bracing the touchline angle and, fairly impressively, Kleyn and Holland are stopping all the Tiger’s forward pressure on their own and forcing them inwards to find an angle. The key part of this maul came from a body position error from Mapapalangi when under pressure from O’Mahony on the touchline side of the maul.

Let’s have a look at what happened;

See it? Mapapalangi is feeling the heat from O’Mahony’s counter-shove so he juts his ass forward to increase his drag – almost like a guy taking the strain in a tug of war. That’s an error around a counter mauler like O’Mahony.

See O’Mahony’s arm shift under Mapapalangi’s arse? That movement means that Mapapalangi is now out of the maul as an agent of forward motion and is a liability to the Leicester maul. O’Mahony’s position below Mapapalangi’s core means that the Tiger’s flanker can be shunted off the ground and used to turn the maul.

Let’s look at what happened next;

There’s a massive power shift from O’Mahony’s side and the Tiger’s maul is turning further infield. Once again, Mulipola is exposed on the flank. That means that Archer can wheel him around, stand him up (remove him from the maul as a driver) and give Kleyn an angle through the middle to try and grab the ball.

In the end, this ends as another 7-to-4 maul for the Tigers that Munster managed to stuff comfortably.

Let’s have a look at the final maul that Munster’s Four Man Kill Team put paid to.

First of all – this is a messy Tigers set up at the tail. Traynor’s wall position next to Fitzgerald is less than useless in that he’s sideways on landing. He’s unable to brace anything in this position and Holland can latch directly onto Fitzgerald post jump with little effort.

From there, Kleyn and Archer just pulverise Tigers’ initial brace work and drive them back with ease.

Leicester were in trouble from the minute the jumper was on his way down because Munster had beat them to the set.

Munster are aligned, low, straight-backed and counter-shove in unison the second Fitzgerald’s feet hit the deck. Look at Tigers; Kitchener’s body shape is wrong – shoulders well above his hips with a curved back  – and Mapapalangi joins a heartbeat too late.

The real problem is Traynor, though, as he gives Kleyn a wide target to push against.

Let’s just look at the first section again to see what happens post-jump;

That’s a stuffing. O’Mahony can cover the middle while O’Byrne moves around to infield cover.

There are some screwy BT camera angles in the middle of this, so I’ll cut to the end of the maul.

O’Mahony has braced the infield side of the maul, Kleyn and Archer are nailing the touchline side and Holland has hands on the ball carrier – that adds up to a completely stuffed maul.

With a four-man defensive unit like this, Munster had the Tigers under real pressure and that’s before you get to Munster’s defensive lineout work.

I’ll be covering the attacking maul and lineout tomorrow and, believe me, it’s just as much fun to look at.