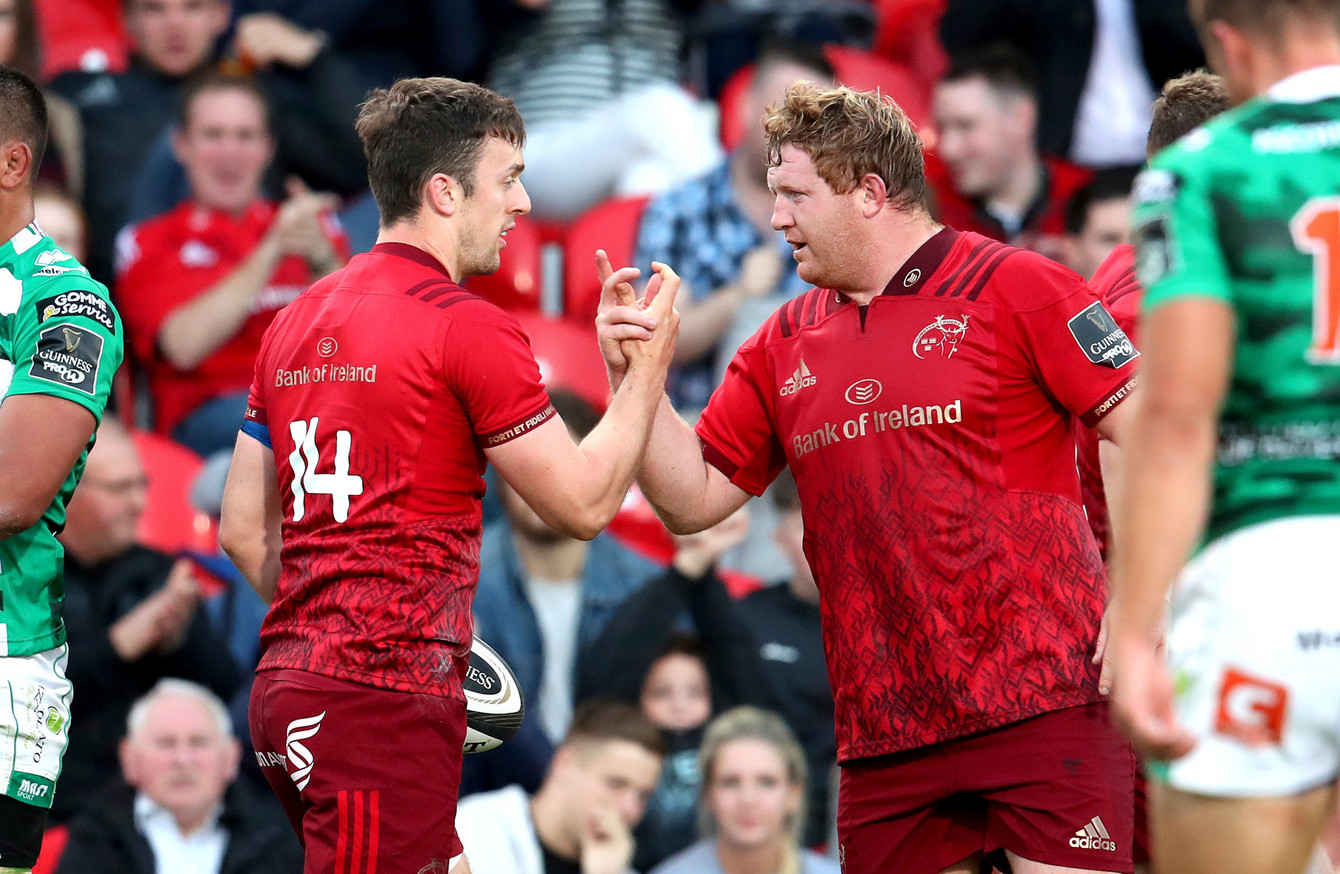 The GIF Room :: Shifting The Point

If coaching excellent attacking rugby was easy, everyone would be doing it but it isn’t, so they aren’t.

This idea that attacking rugby can be just switched on in a month or two is one of the major misconceptions about pro rugby – and one propagated by quite a few in the rugby press. If it was as easy as “throwing the ball around” or “trying a few offloads” then attack coaches wouldn’t be one of the most sought after staff in the game. Why are they so valuable? Because creating an effective attacking game plan is a multi-vectored, all encompassing project that takes time, patience and endless attention to detail to create.

Last season, Munster’s attack varied from massively efficient brutality to, at times, varying degrees of pyrrhic phase play that left us burned out come season’s end. In a way, that’s how we had to play; our preseason last year was spent changing up an awful lot of things and putting massive resources into defence, breakdown and set piece. When you’re coaching, time and energy is a resource – so you can’t load too much onto a squad at one time if you want the squad’s levels to rise in unison – so you focus on one or two things at a time. Defence, naturally, was a concern.

This meant that a lot of our attack patterns last year were quite conservative. We knew that we had 3/4 elite forward carriers, a strong maul, a good scrum, and a great kick chase. So that’s what we did for the most part and, married to a rock solid defensive game, it was enough to push us to the business end of the season.

But it was a tiring way to play when we had a lot of ball in games, and even though we were better on turnover ball than you’d have thought, there was going to have to be an evolution there.

As Erasmus himself put it;

“We have to evolve and for most coaching teams the easiest things to fix are the mechanical things – breakdown, scrum, defence, etc. They are not so much skill based, whereas with counter attack – dynamic play and continuity – those things take a bit more time before people are comfortable.

The key part there is “time”. The week to week grind of match preparation just doesn’t give you the kind of time and mental space you need to build those skills and, almost more importantly, attacking tendencies.

You need a preseason period to actually coach these kinds of things into your squad but you can’t do that without a rock solid base already in place. What could is attack when it’s not bolted onto an elite defence? It takes time to build these things.

This preseason, when viewed in context, was incredibly important in so far as building this new dimension was concerned.

If Munster’s attack is to be successful this season, it can’t be a revolution – it must be an evolution, and one built on what we can force out of the opposition.

Any attack has to have three major components;

These components cover most instances of attack, but they also demand close attention to how the opposition will react to us in general. Attack, as a general principle, has to be built on the fears of the opposition. What are they afraid of?

What I’m really saying here is “how much space and time can we scare out of the opposition, and how best do we exploit that?”

Any team setting up to play Munster this season will be aware of our excellent ability to carry the ball close in through the forwards or through our midfielders who could easily be forwards as far as size goes.

If you aren’t properly resourced around the fringes, Munster can and will do this to you quite easily;

Lightning quick chained fringe carries right up the guts with waves and waves of forwards coming around the corner at pace. It’s so easy to give away a penalty for offside or not rolling away here, let along the threat of Munster ploughing right up the middle of your defence. Lethal. But this is fairly exhausting from a forward’s point of view and, if it doesn’t work, you cede momentum. It still has to be planned for from a defence POV though.

So how do you exploit this? With the tip on.

It’s a little thing but a good tip on right before contact can bring a big advantage in that you can bring a moving carrier onto a static defender at an advantageous angle. Look at this example here;

O’Donoghue’s tip on creates a better angle for Kleyn and the timing of it stands up the fringe defence for a split second – the result is Kleyn powering over the gain line.

Look at this other example;

It’s a little tip on before contact with similar results as before – defence sitting down, the carrier getting good gain line – but look at Sean O’Connor (#6) acting as a gate keeper. Not really interfering with play or obstructing a tackle, but screening the line until the last second to unsight the defender and give the carrier an extra half a second to work with.

Munster used forward pods and tip on carries quite effectively at times against Benetton and in a way, set up somewhat similarly to the way the All Blacks attacked the British & Irish Lions. When you consider the way Saracens shut down Munster’s fringe game in the Aviva last April, this addition to the forwards’ handling is quite interesting.

In fact, Munster’s forwards passed the ball quite a bit in tip on scenarios and open play – 33 times between starting pack and replacements over the course of the whole game (and with 38% possession in the second half). Those are quite good numbers even when you take the standard of the opposition into consideration and shows where a lot of the focus has been in preseason.

Good attacking teams kick the ball quite a bit – just watch the All Blacks/NZ franchises – so this idea that kicking is an inherently negative trait has to be stamped out. A good kicking game – even a spot of kick tennis – has to be looked at like you’re setting the table for the attack.

Every time you kick the ball away, you force a reshuffle in the opposition as they reshuffle defensively or attempt to transition into attack. If they kick back to you with any kind of inaccuracy you can attack with lethal consequences.

This wasn’t a try, but look at how Marshall approaches the kick transition here;

It’s a little thing, but watch how he works hard to get out to the touchline to give that support option on the return. When Wootton needs him, Marshall’s there as a wide support man and he helps Munster make some good tight metres down the tramlines.

It’s a small thing but it shows the tweak in mentality. The tweak was visible in Conway’s super counter attack for Wootton’s try, but it was almost better in Conway’s own try.

Have a look at the movement off the ball while the kick is in the air;

Look at Taute resetting in midfield but – almost more importantly – look at Bleyendaal scanning the Benetton kick chase to look for holes at 34:17 on the match clock.

Bleyendaal knows where the space is, knows where his options are and knows that the right ball can launch our dangerous runners into disrupted space.

That’s exactly what happens and it’s a great try.

Even on the turnover, look at how Conway and Sweetnam organised around Taute like an arrowhead with Farrell running a hard finish line on the outside.

This doesn’t just happen – this is drilled again and again in kick return scenarios and other compartmentalised drills during preseason. This is a high risk play – any handling spills and this could well end up under our own posts but we have that confidence to play and counter punch even on risky plays like this one.

And finally, I mentioned last time out about the impact Chris Farrell could have on our attacking options and he showed some of that potential Friday night – both what he could do and what he can make the opposition do.

This move didn’t work out, but watch the effect his decoy line has on Benetton’s defence.

He pinches in the outside defender who can’t trust that the men covering inside him can do the job on Farrell. If this ball goes to hand, Bleyendaal almost certainly puts Sweetnam away down the tramlines. When you’ve a guy of Farrell’s size and pace (watch his line with Conway on the GIF before this one) he can make defences react in a panicked manner in the wide channels.

The pace on his line here made the punch that would lead to the first try. Look at the pace and angle that he approaches the ball with! Benetton make a good tackle but it’s passive. Almost a try. Especially when you notice, Conway buzzing in alongside him for the offload that Farrell was angling to make.

That shows the change in attacking mentality that Munster spoke about making. Doing it against Benetton was easy enough but the seeds we saw on display show that we may have more than a few tricks up our sleeve this season.