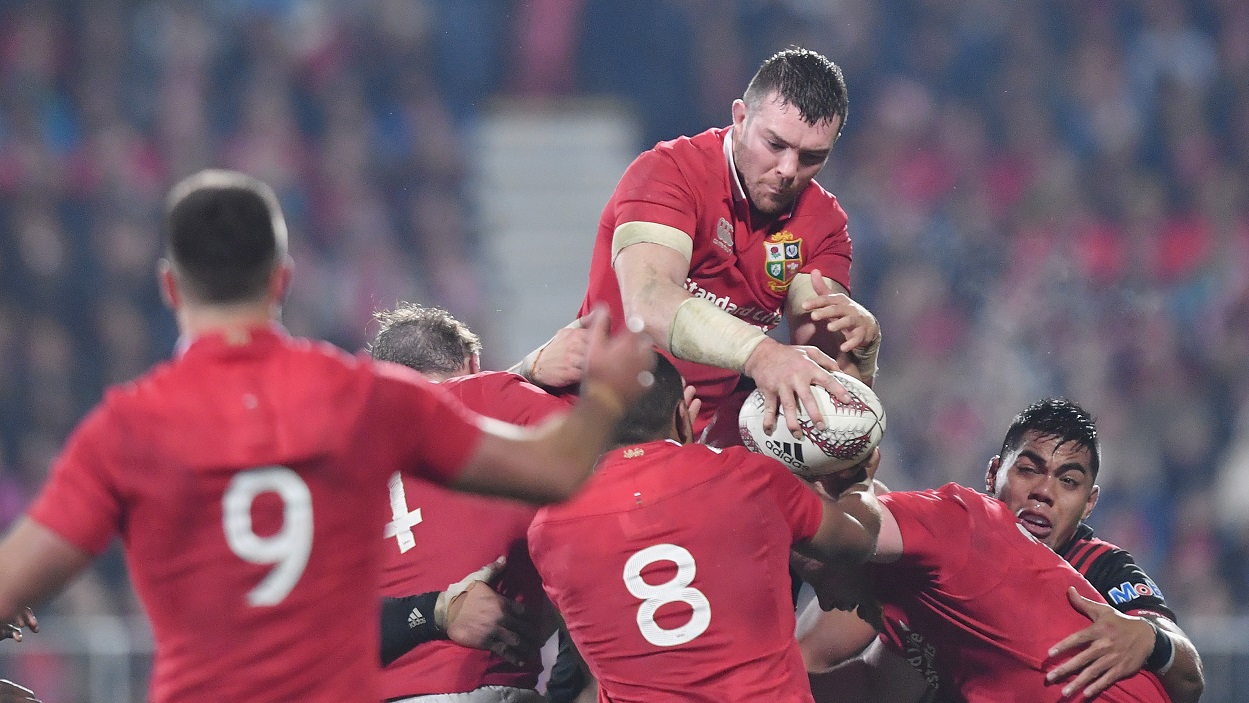 CHRISTCHURCH, NEW ZEALAND - JUNE 10: Peter OMahony of the Lions wins a lineout during the match between the Crusaders and the British & Irish Lions at AMI Stadium on June 10, 2017 in Christchurch, New Zealand. (Photo by Kai Schwoerer/Getty Images)

The GIF Room :: Seeing The Unseen

ESPN stats are the cause of, and solution to, most rugby arguments. As a metric for measuring the basics of how a certain player performs (or not) they can be quite useful, if the metrics you want to judge players on how far they ran with the ball, how many offloads and passes they made, and how many tackles they made and missed. But they only show part of the story.

Like, for example, Peter O’Mahony’s performance against the Maori All Blacks on Saturday. If you’re a hardcore ESPNista, these are the stats you saw for Peter O’Mahony;

Looking at these, you’d wonder what all the fuss was about. But a closer look at the game shows us that O’Mahony had one of those coal face games that fellow players just love. The vital clean out he put in right before Itoje’s killer try won’t show up on ESPN, and it might not even be shown on the slow mo highlights after the game, but the players and coaches know how important it was to the team’s effort.

When you examine any player’s contribution to a game, you have to first look at what the player’s role was – or at least what you think it was based on watching the game. These roles are hugely important to the functioning of the team as a whole and the pack as a unit within that whole.

Judging Peter O’Mahony’s game as a “traditional” blindside flanker role isn’t a good place to start. That role – traditionally seen as a destroyer in defence and a second phase carry machine – isn’t really in O’Mahony’s wheelhouse. His game is more nuanced. I know I’ve lost some of you to eye rolls here already but stay with me. O’Mahony’s game is based on three core tenets;

Not necessarily in that order, but close enough to it. You have to imagine his role as being a half-lock forward, if that makes sense.

You need to pair him with guys who compliment his tendencies but when you get that mix right, O’Mahony is the guy that helps to keep the whole show on the road.

Let’s get to his excellent work at the coal face against the Maori.

As a quick guide, a Strong Protect is a decisive action taken at an attacking ruck to protect the ball, be it a clean out or a guard over the ball. A Useful Attendance is an action taken that added some value to the breakdown such as helping to secure it against a counter shove. A Needless Attendance is one of those ones where you see a guy leaning on a breakdown without adding anything of value to it. A Kick Guard is where you are not at the attacking ruck in a securing manner but did act as a box kick guard. Act As Half Back is where you, as the name might suggest, act as the half back by passing the ball away from the ruck.

Overall, O’Mahony had 28 positive breakdown involvements, which is 26% of the Lions total attacking rucks. His percentage is probably higher than that, as he went off at 60 minutes, but I’m not mental enough to go counting rucks back from 80 minutes. Not yet, anyway. The breakdown was O’Mahony’s real power area here, and he had a couple of vital interventions.

This doesn’t look like much, but O’Mahony does an excellent job in preventing Liam Messam “soft killing” the ball at this ruck – as in, lying on the ball just enough to slow the ball down without giving up a penalty – and cleans him out around the corner. The result? Itoje gets lightning quick ball and the Maori have a channel to fill.

Having a guy like O’Mahony to get involved in the dirty work allows the likes of Itoje, O’Brien and Faletau to do the carrying – all had carry numbers over 11.

The Maori didn’t really manufacture much possession (32% total with 19% in the 2nd half) or many rucks (50 total) so his defensive work didn’t really come into play.

His ESPN lineout stats don’t make for great reading either, on the face of it. Two lineouts and no steals?

Again, you have to look at his role in the lineout. He was part of a hugely interesting pod of jumpers. Kruis, Itoje and O’Mahony – can you imagine? All three are world class operators in their own right. Look at them here on a defensive set.

O’Mahony’s prowess as one of the best front jumpers in the game puts the Maori off and they concertina up and down the shortened line looking for space. They almost turn it over.

O’Mahony’s work in the air is well noted – he’s got excellent footwork pre-jump, a fantastic spring jump and great hands.

Good presentation afterwards and strong work at the point of the maul before peeling off and adding real power at the tail. It’s simple stuff but it’s done to a high level.

The Itoje, Kruis & O’Mahony pod took 7 lineouts in total and made the Maori work hard for most of there ball.

O’Mahony spent most of his day lifting Kruis in the lineout and acting as a strong arrowhead at the point of the maul.

Look at the clean pocket Mako has at the middle of this maul set up. Look at O’Mahony’s feet – two set steps, plant, lift, down, brace. That’s precise, strong work.

O’Mahony lifted Kruis so much that he took a lot of lifting heat off Furlong and Vunipola. Energy is a finite resource on a rugby pitch so any calories your props are saving in the lineout get focused into the scrum and other settings.

Add in intangibles like referee management (the Lions conceded 4 penalties and won 15), and his leadership qualities and you’ve a guy who’s showing everyone exactly what he can do.

Just make sure to look for the unseen stuff that ESPN can’t show you.