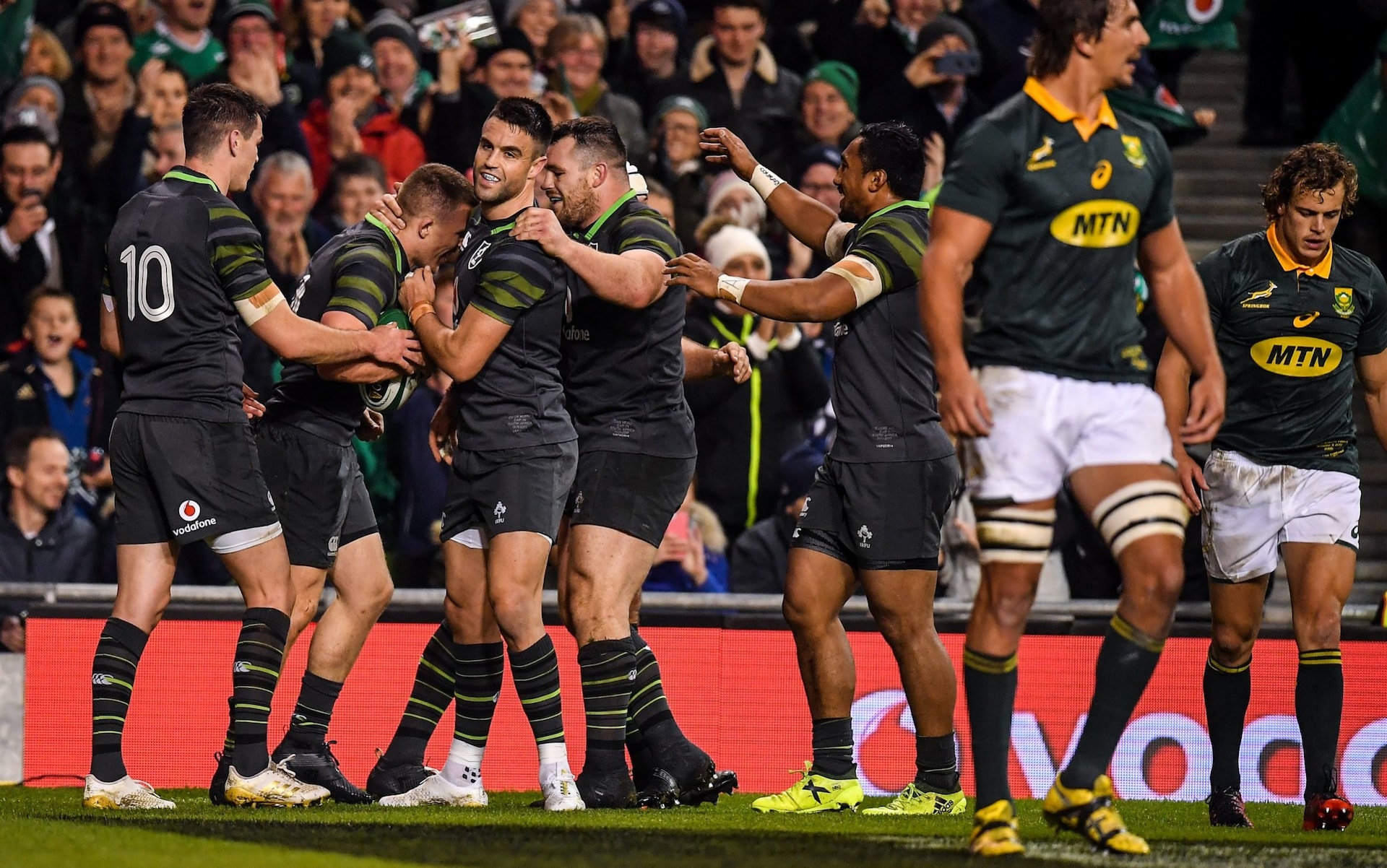 The route to beating South Africa is to convince their forwards that giving the ball to their backs is the best option on any given phase.

Once you do that, they are incrementally less likely to score against a line speed defence due to a number of factors – decision making and passing standards chief amongst them. The key is to prevent their forwards getting decisive linebreaks and flooding the areas around the ruck with narrow, heavy runners.

I have a number of examples of this very play – forwards going around the fringe and up the middle of the ruck – from South Africa’s Rugby Championship campaign.

Sometimes it’s based on a break (like the very first GIF) but mostly they did this with a bunch of forwards supposedly there to resource the ruck and then attacking heavy when the fringe defence switches off.

When it works, they get that clean stride over the gainline and could offload narrow to the heavy support runners (formerly ruck resourcers) and make good ground. As an attacking gimmick, this is one of the most efficient out there. The ball never has to travel farther than a metre or two in the air and, if successful, you get a straight run at the posts with open field and your buddies screaming for the ball either side.

Yet on Saturday, the Springboks couldn’t get the same option going at all. Why was that? Let’s have a look.

I imagine that this aspect of South Africa’s forward play was well scouted in advance. In the close loss to the All Blacks in October – the Springboks best performance in the last two years, for my money – the South African pack threw 8 offloads. Against Australia at home they managed 11 offloads. The vast majority of these offloads were in the narrow channels around the ruck after a tight linebreak had been secured.

Against Ireland, they only managed one offload. Total.

Ireland shut down the Springbok offloading game by recognising their preferred areas of attack and then adjusting their ruck placement accordingly.

Look at this GIF here as a direct example;

The Beast carries hard into Stander and makes some ground as four South African forwards congeal around the end ruck. If you’ve watched South Africa previously, you’ll know that this is a prime spot for them to break around the ruck.

But look at Ireland’s line – they hold their depth half a metre back and closer to the middle of the ruck than traditional pillars. The key men to watch are O’Brien, Best and Henderson. Look at how they float in position to cut off the possibility of a tight run around the fringe.

South Africa can sense that the run up the middle isn’t there, and go wide. This is what we want.

We slow the tackle, make the pocket around the ruck messy and then watch O’Brien wiping across the fringe – he’s assessing where the Springbok forwards are going (to the right of ruck) and going where the danger is. The distance from the ruck gives him time to spot the danger and react.

Even here, on a surge ball post turnover, we keep the same scheme – distance, spacing and a man cycling across the middle. When the Boks break here through Marx, you can see Henderson reacting immediately and stopping the momentum dead.

If Henderson tried to plant himself flatter to the ruck here, he’d be more vulnerable to getting beaten. Where he stands, all the action is happening in front of him in that sweet spot that gives him time to spot, time to react but short enough distance that he can make the hit.

We would stick to this pattern throughout the game and it took away a key Springbok weapon.

O’Brien in the middle, challenging and guarding. Healy further back than a traditional pillar – Aki watching the break option.

On this one, you can see Best and Henderson closely guarding the side of the ruck where South Africa are still on their feet (look Henderson react to Kolisi’s guard position).

Even on turnover ball, we attacked the ruck and then stepped well back from it, only relaxing when the Springbok cleanout goes off their feet and out of the phase.

This ruck philosophy gave Ireland a key weapon to defanging the South African pack and forced them into wider patterns where their skills would let them down time and time again. That extra spacing also gave us some great looks at stealing the ball on the floor as the Springboks surged away from their ruck support. All in all, a good day out for Andy Farrell.

You couldn’t use this particular philosophy against a team with quicker forwards or against a side who’s ability with ball in hand surpasses the Springboks at this point in time.

Another win for the video room.