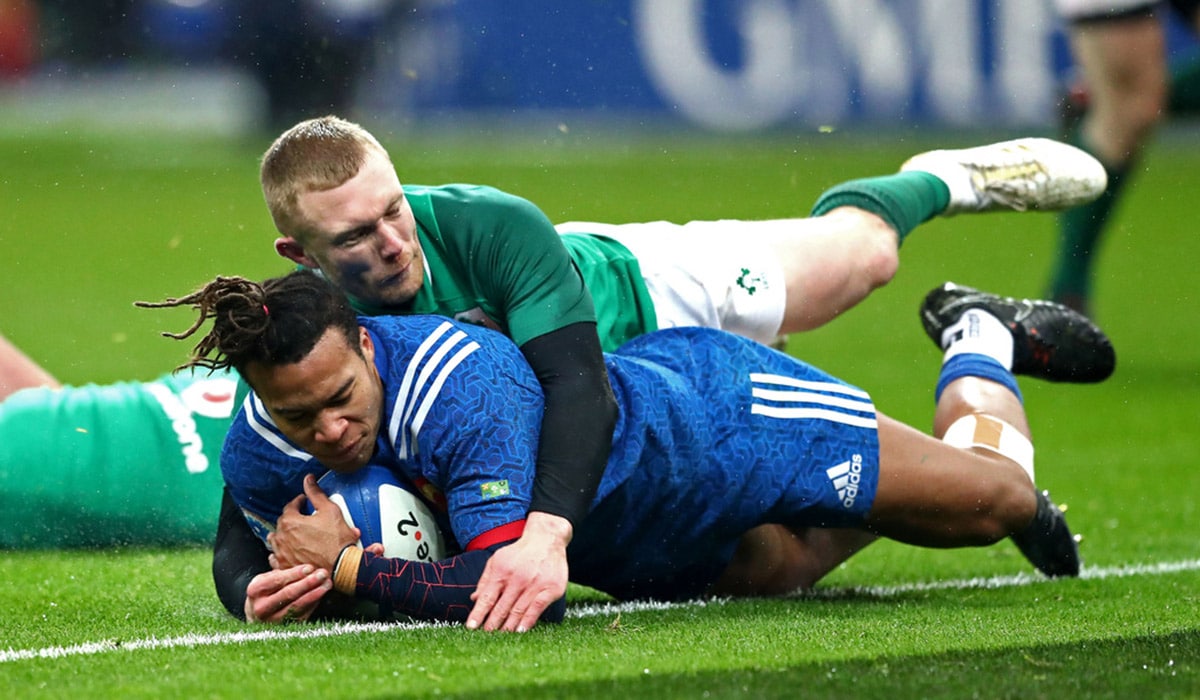 That French try was the suckiest sucker punch in the recent history of sucker punches. So how did it happen?

I thought I’d put together a quick GIF Room together on how this try was the result of a collective failure rather than just letting the blame fall on Kearney, Stockdale or Murray depending on where your provincial bias is.

First, let’s look at the kick that lead to the transition situation;

It’s a pretty good kick distance wise but it really should have gone into the stands. Kearney wanted to get every last metre out of the clearance given that Ireland were a little under the pump at this stage and he wanted to get as much ground as he could. The bobble before he collected it shifted his angle too, to be fair, but I think Kearney and everyone else will know that this should have been in the stands on the halfway or before it rather than creeping into touch on the French 10m line.

Once France decided to go quickly off this lineout, we were in trouble. Why? No collective chase. 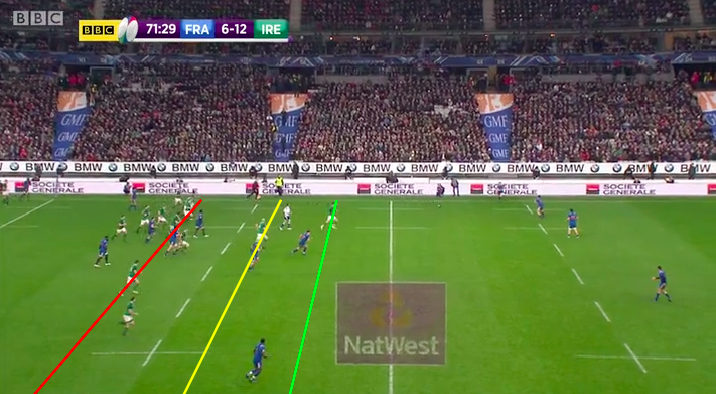 Murray’s positioning (green line) is spot on and Toner (yellow line) is where the other forwards should probably have been. The red line is where the bulk of the team were when the ball came back into play and that causes an immediate problem.

Kearney’s kick distance is the biggest error he made in this game and it was compounded by the lack of a chase from everyone around him. Everything thereafter was a consequence of these two errors.

Let’s run it through;

A horror show. It’s the Babadook on grass and in French. There’s plenty blame flying around but once Dupont goes beyond Murray, the edge defence of Kearney and Aki is in serious trouble. This is one of those 50/50 decisions in defence that you never want to be presented with.

The shot from behind shows the decision pretty clearly.

At the point where Dupont beats Murray, Kearney has two viable threats to worry about on the outside edge; 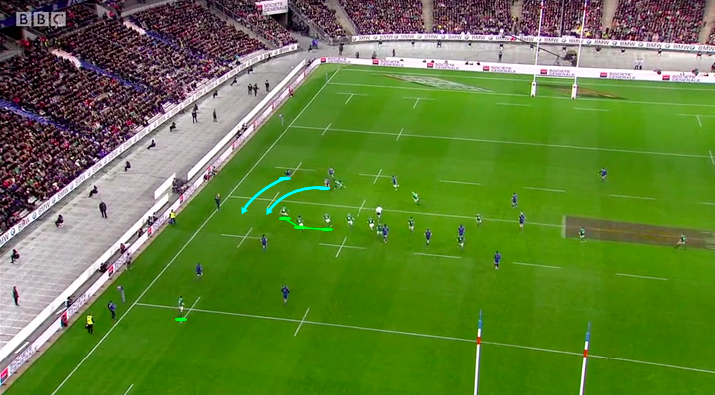 The pace of Dupont and Thomas prevents Kearney from filling that gap sooner and sticking closer to Aki then what might have been optimal. He’s extremely aware of the threat Dupont poses on his inside shoulder. 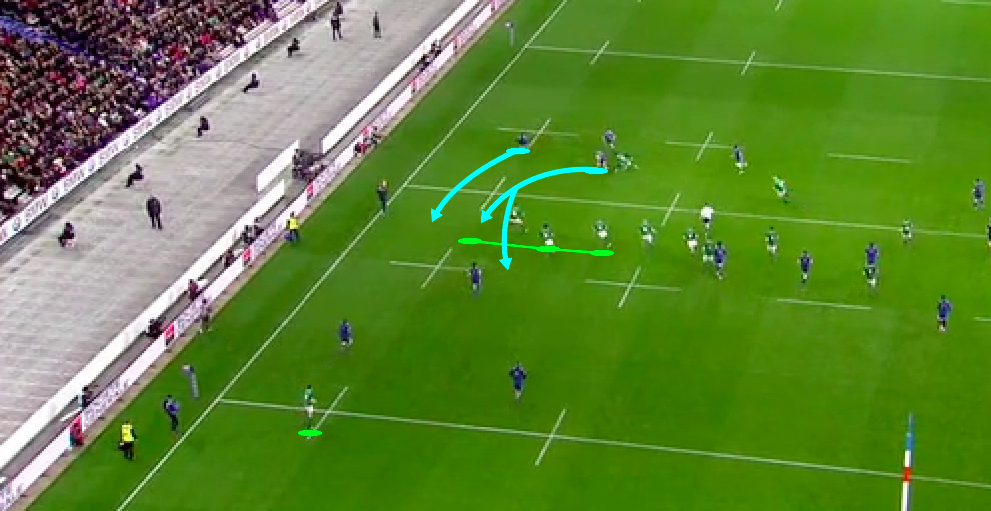 Here’s how it played out in motion;

You can see Kearney react to Dupont’s inside step by sitting down slightly on the outside edge. I’ve isolated the key moment here.

He sits down on the Dupont step but, crucially, loses his footing slightly in the greasy conditions and that gives Thomas the time and space he’d need to break the line.

The other option Kearney had was to shoot hard on Dupont and gamble on panicking the young lad but that poses similar risks. Either way, once the ball went beyond Kearney, there was no way he was going to catch Thomas from a standing start – very few, if any, players would make up that distance on Thomas in that scenario.

From there, the responsibility was left to Stockdale who had a supremely difficult defensive situation to deal with. Here’s how it played out;

When Thomas emerges around the edge, Stockdale has two initial threats to assess; 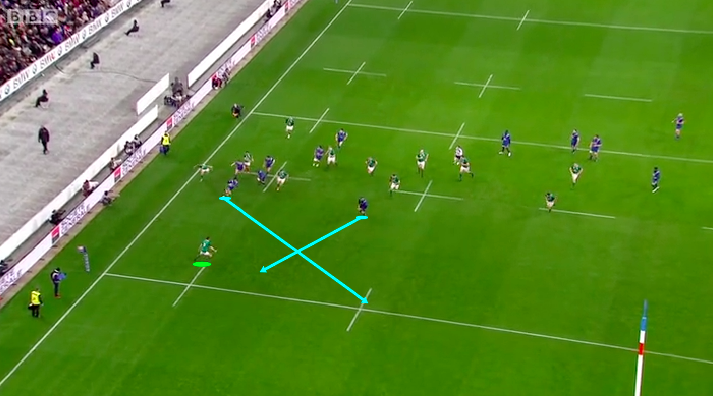 That second option sits him down for a split second and that gives Thomas the edge on the road back inside. Should Stockdale have made up the distance? 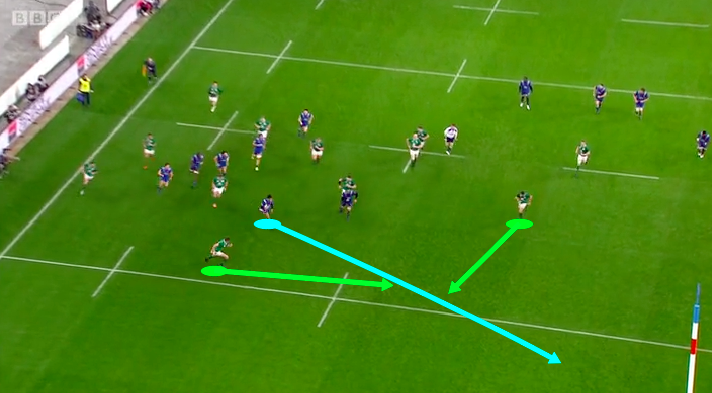 I mean, maybe yeah, but he’s trying to accelerate onto a line being run by a guy who’s already at full pelt and that’s a tough ask from where a “kick back” insurance position. Thomas’ line will have a natural arc to it anyway to avoid Sexton’s defensive line and expecting Stockdale to make it to that intersection in a position to make the tackle is fairly ambitious. He gets there, to his credit, but he’s just off the angle he needs to complete the tackle.

For me, the biggest issue on this try was the lack of a chase. If our line was further up, we’d have taken away some of the space that Dupont used to fix our edge defence and maybe avoided the need for those last minute dramatics.