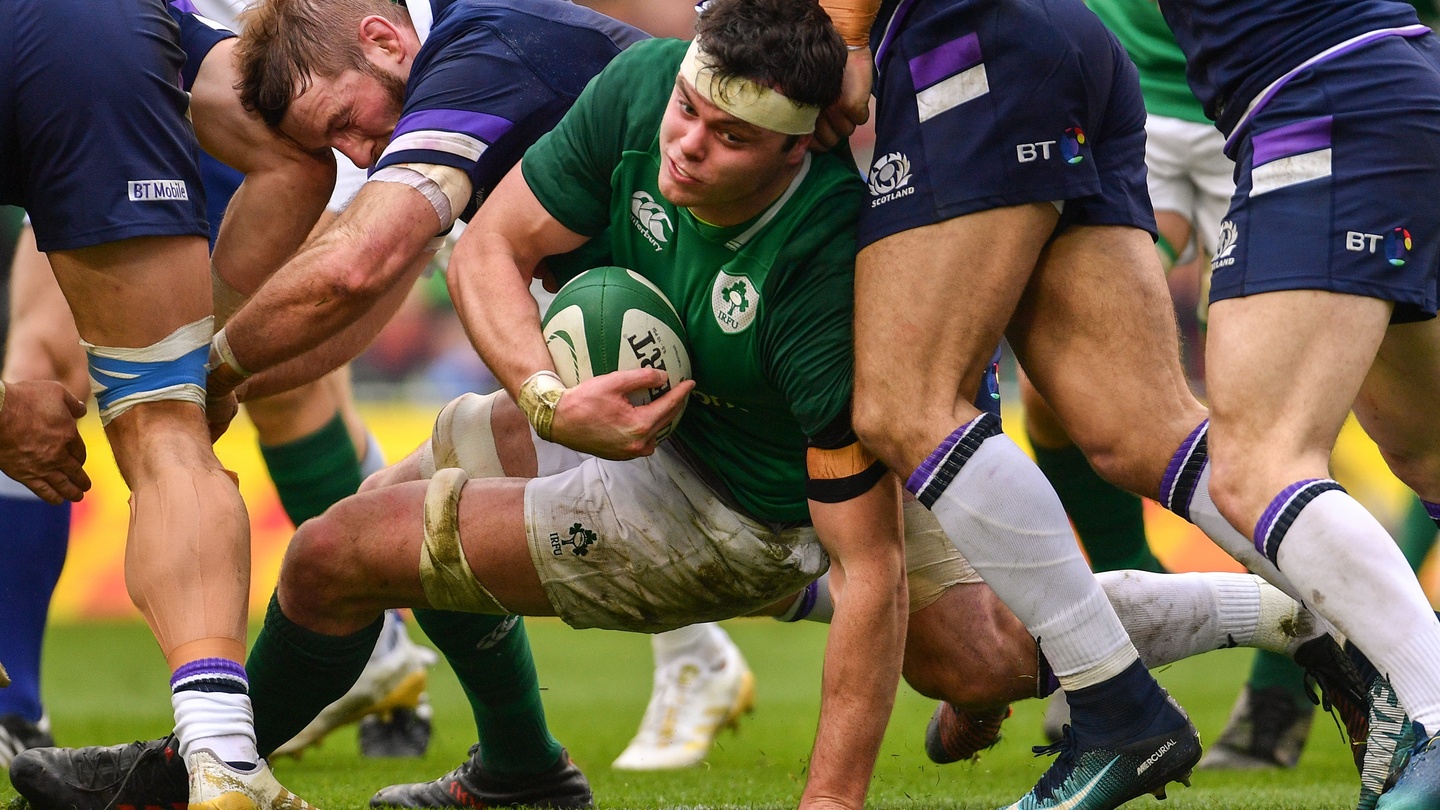 The GIF Room :: Pressure The Ruck

To beat Scotland, Ireland would have to retain possession, punish them in contact and then pick off whatever resistance was left once the opportunity arrived.

In that task, Ireland were mostly successful. Our brutally efficient phase work ground away at the Scottish forward defence with a rhythmic, concussive force that worked over their back five, limited their opportunities to steal the ball and limited their own attacking ambition.

Possession isn’t always about line breaks, offloads and tries – the fighting equivalent of haduokens and shoryukens – sometimes it’s as simple as working the body before going for the killer cross that wins the fight. Ireland are currently the embodiment of a boxer that walks his opponent down, punishes the body before landing the KO late in the fight. Pressure, pressure, pressure. But to build that pressure, you need outstanding rucking built on accuracy, clear division of roles and good phase construction. In short – you need to know who’s doing what, when they’re doing it and where. It is in this aspect of the game that Ireland are the best in the world.

In fact, if you look at the Six Nations to date – Ireland have the most amount of successful rucks by some distance;

Ireland’s third lowest amount of rucks per game (138 against Wales) was higher than the largest ruck score of any other team in the competition, the closest being France’s 121 rucks against Italy.

This paints a pretty definite picture of Ireland’s style; relentlessly bludgeoning the opposition into submission before attacking with width when the playmakers see the space. Does this translate to a lack of tries?

In the four games of this Six Nations, Ireland have scored 17 tries. The last time we scored that many tries in a Six Nations was 2007. We’re beating teams up, scoring a truckload of tries while doing it and have a Championship in our back pocket with a game to spare as a result.

– is made possible by narrow, cardio sapping, pattern setting punch carries like these;

The brutality sets up the finesse. It enables the likes of Sexton, Ringrose, Earls and Stockdale to work their magic. The consistency of Ireland’s carrying marks gives them a tonne of feints, that they condition into the opposition defence.

Look at these two breaks, enabled by the slowing of the Scottish defence when the ball hits Stander’s hands.

If you’ve been defending the likes of Leavy, Stander, Healy, Furlong and Ryan phase after phase, then the change of pace – pass instead of carry – can make a real difference to Ireland and it’s what we like to do instead of throwing percentage play offloads. We throw tip on passes, pull back passes and chain our carrier with a pace and tempo that teams can’t live with – or at least haven’t been able to so far without Nigel Owen’s particular style of breakdown refereeing.

To maintain this level of phase pressure (and carrying patterns) we use the elite rucking and insane workrate of a few key guys. Just like I did against Wales, I decided to breakdown Ireland’s rucking against Scotland.

The continuing accuracy and reliability of Peter O’Mahony’s dominant ruck work is really something to behold. His pace, positioning and physical dominance at the ruck was really impressive and he was the third highest dominant rucker despite only spending 54 minutes on the pitch.

There was one he’d have liked back;

Ringrose’s slip off McInally stalled O’Mahony’s approach but even then, he’ll have been disappointed that this one got away.

The rest of his game was the usual excellence from O’Mahony – being in the right place at the right time, and reacting quickly to changing circumstances with pace and aggression. The mark of a great rucker is the efficiency of their work; they are where the ball is and they have the ball secured before anyone even realises there was a problem.

He’s joined by another gargantuan performance from Rory Best, who topped the charts for Guard Actions and keeping pace with the young monster James Ryan on dominant ruck actions. James Ryan’s work has to be noted too – he was joint top tackler, the top carrying outlet in carries and also a vital part of Ireland’s ruck support.

Here’s a good example of his power over the ball on Ryan Wilson. And by good, I mean “scary good”. He’s not fully there yet – his timing was a little off on some of his cleans – but he’s going to get there for absolute certain. It’s not even a debate.

Dan Leavy had a very industrious game that had him operating a little wider than he normally would, which includes some of the late arrival ineffective actions that I spotted. That shouldn’t be of too much concern though – he’s got all the fundamentals.

Look at his support line off this scrum up against Hamish Watson;

Straight, hard lines right to the ball. Compare that to Robshaw last week and you’ve an idea of how well suited Leavy is to that test openside shirt.

CJ Stander’s work was, as usual, of the highest quality and physicality. He was Ireland’s joint top tackler, biggest forward metre maker and absolutely bossed it at the ruck for attendance, accuracy and importance. His game is still developing and he’s already an elite test #8. He’s a monster.

I want to give a special mention to Bundee Aki though. Just like he did against Wales, Bundee did a world of ruck work to help keep Ireland’s phase pressure running smoothly. His 17 dominant ruck actions would be something a backrow would be proud of, and I’m certain it didn’t go unnoticed by Schmidt.

Overall, Ireland’s rucking was of a massive standard. You don’t win 152 rucks from 157 attempted (96.8% completion rate) without everyone from 1-23 showing up for work and doing it to a very high level.

Ireland’s style is grinding teams out phase by phase and ruck by ruck. If we bring the same kind of ruck accuracy and brute force to Twickenham this weekend, we’ll leave with a Slam. We just have to trust our system, adapt to the ref and the rest, we know, will come.