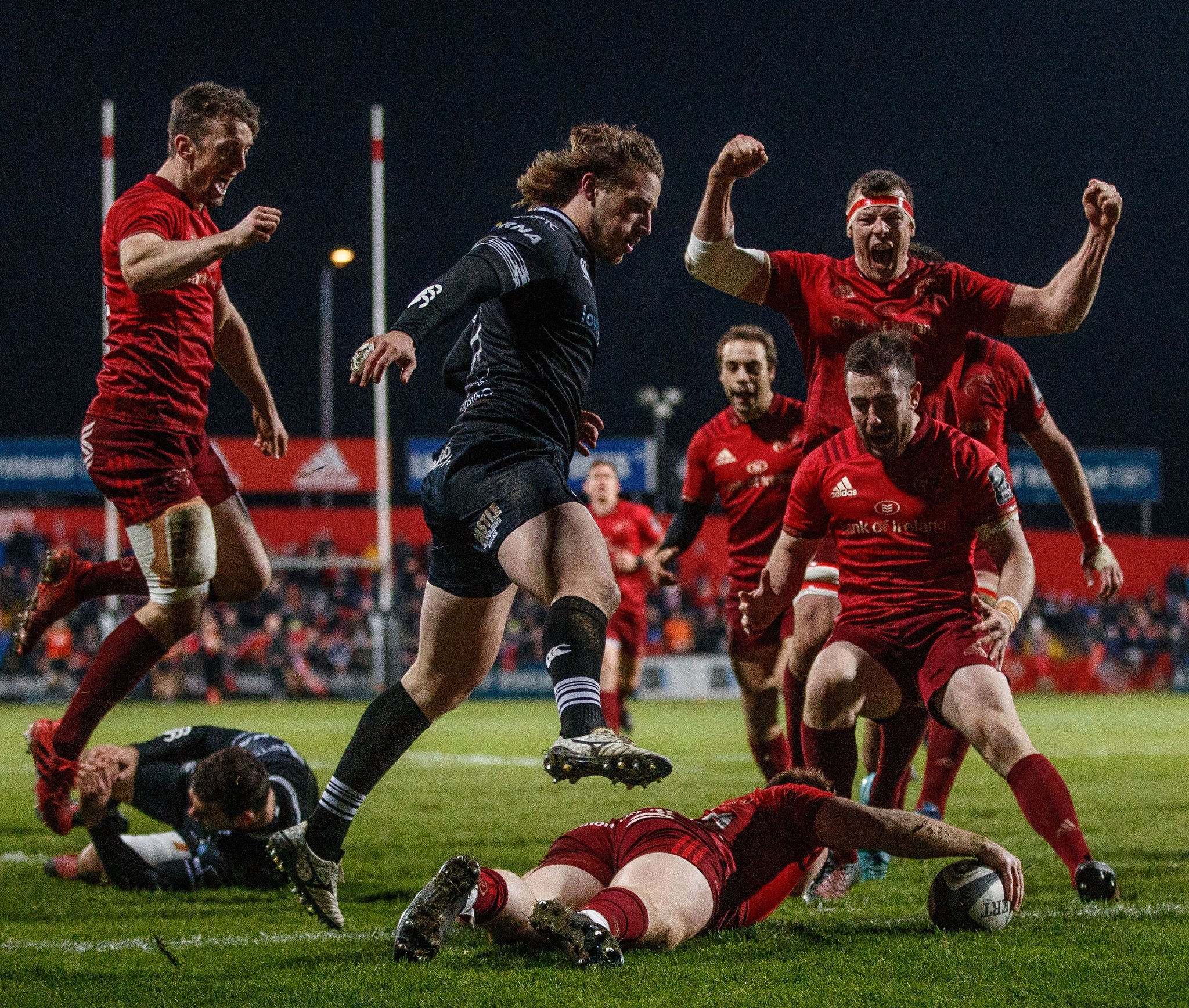 It’s been three games since the 20-16 loss to Connacht in the Sportsground and those three games have seen three wins, seventeen tries, and 15 match points.

You can’t so much better than that. From a performance perspective, portions of all three games have left a bit to be desired but honestly – who cares? We saw last season that blowing everyone away in November, December and January means less than nothing come April and May, so when you get five points you didn’t have to scratch and claw to earn like Munster did here, you take them with both hands and don’t look back.

If I was to describe this game in two words, they’d probably be; handy enough.

Munster won this game by 26 points with none of the forward pack carrying more than 10 times, collectively carrying the ball 27 times fewer than the Ospreys, had 29 fewer rucks with 28% possession and territory in the second half.

We were working smart, not hard and that was enough to rack up a bonus point win by the 42nd minute.

In a lot of ways, it showed a collective calmness that we’ve not shown too often so far this season. There were no forced offloads, no overly elaborate running lines, no high-risk wide-wide plays; just effective, energy efficient rugby. We didn’t force hands on turnover ball when a well-aimed boot down the pitch was just as effective. We tightened up our forward carrying to avoid getting snaffled on the ground. We put Ospreys into positions to make errors and then punished them when they presented themselves.

It was good watching.

The win was mainly founded on shutting down Ospreys two main ball carriers in Cracknell & King – which we did pretty well in all but two occasions – and spoiling their ruck ball every other phase. For the most part, Ospreys ruck ball was so slow it could have been underwater and that was due in large part to Chris Cloete’s stellar performance around the breakdown. With a better referee, Cloete could have ended this game with three or more jackal penalties but he had to make do with drawing two or more Ospreys cleaners at every other phase to the point where we tended to over-blitz on some phases due to having too much time to line up defensive targets.

What a player Cloete is turning out to be.

With that kind of defensive dominance, it didn’t really matter that the Ospreys had 78% possession in the second half, or that they ran through 93 rucks; Munster were beyond comfortable for most of the game and only really looked in trouble once Ben Whitehouse Jnr worked himself into a fizz in the last 15 minutes.

So, all in all, the Ospreys weren’t up to much here. There were flickers of defiance once the game had been put beyond them, but that’s a bit like finding a €5 note two hours after you’ve been evicted. Much too little, way too late.

As for Munster, there are bigger days to worry about in the weeks ahead but for now, this five-pointer all but guarantees knock out rugby at season’s end, even at this early stage.

So we move onto the Tigers in the Champions Cup and, all of a sudden, it’s Do Or Die December again.

The baseline rating for this game is a default Two Crown rating.

Here are a few of the notables;

Liam O’Connor was playing really well up until his early withdrawal due to a pretty serious looking injury. Hopefully, it’s nothing too long term as he’s been the stand out young player for me this season.

I thought Darren Sweetnam had a pretty good game. Made two errors in the build-up to Ospreys first try that he’ll be unhappy with on review. Solid.

Calvin Nash put such an excellent hit on Hanno Dirksen late in the second half it almost bumped him up to Three Crowns. Looks ready for more exposure to this level.

A pretty good game for all of these lads.

Jean Kleyn looked back to the peak form he was showing prior to his neck scare against Glasgow. His break down the tramlines was as impressive as it was just plain scary to see a man that size move that quickly. Incredibly physical.

Darren O’Shea was pretty excellent when he came on, I thought. He seems to have added a bit of power over the summer that’s made him really effective on both sides of the ball. He was very effective in the maul and put in some bone-shaking defensive hits.

Jack O’Donoghue and Robin Copeland made a real improvement on last week’s performance. Both made an awful lot of ground on their carries and looked much “tighter” in everything they did when compared to last week. Both men had really good performances in the lineout, specifically.

Chris Cloete could have earned an Awed Paulie (yes, I still have those) had he got the reward from Whitehouse for three clean jackals but – not to be – but he had another eye-opening game here. He stopped up Ospreys at the ruck, buzzed our attacking ruck with real pace and aggression, set up a try for Sweetnam and scored an extremely intelligent try of his own.

James Hart and Ian Keatley were the personification of calm in this one and really hurt Ospreys with their kicking game. Hart’s service wasn’t as quick as what it might be but it barely mattered against a sluggish Ospreys defence. His kicking and general pass accuracy is a real highlight and, for me, his tactical kicking would move him ahead of Williams in the pecking order.

Ian Keatley looks like the player he was prior to 2015/2016 and was really, really good here. He’s just oozing confidence in everything he’s doing and Munster are reaping the rewards.

Rory Scannell and Sam Arnold needed a big game ahead of their potential selection against the Tigers and they delivered here. They aren’t the tallest midfield anyone’s ever seen but by God, can both men carry a ball and put a hit in! These lads are two pocket battleships on either side of the ball. Arnold’s try was an example of his pace, power and line choice. The exact same could be said for Scannell for his try but, for me, it was his kicking game at first receiver that stood out in the second half. Encouraging.

Alex Wootton got through an absolute mountain of work in this one and probably had his most effective performance of the season. Sure, he’s been in games where he’s scored more tries but this was the first game that really stood out to me as the performance of a potential international. Real quality, especially when he slotted in at fullback.

And finally, Rugby Rhys Marshall. What a signing this guy’s turned out to be! He’s a good scrummager, a good thrower and his work around the pitch is high quality. With Marshall and Scannell, Munster have a hooker for all occasions. Marshall was very, very, very good here. His kick through for Wootton, his passing, his near endless engine and flawless throwing were the standouts. Real quality.

I’ll have full GIF and Video coverage of this game in the next week on TRK Premium along with the build-up to the back-to-back games against Leicester in the Champions Cup.