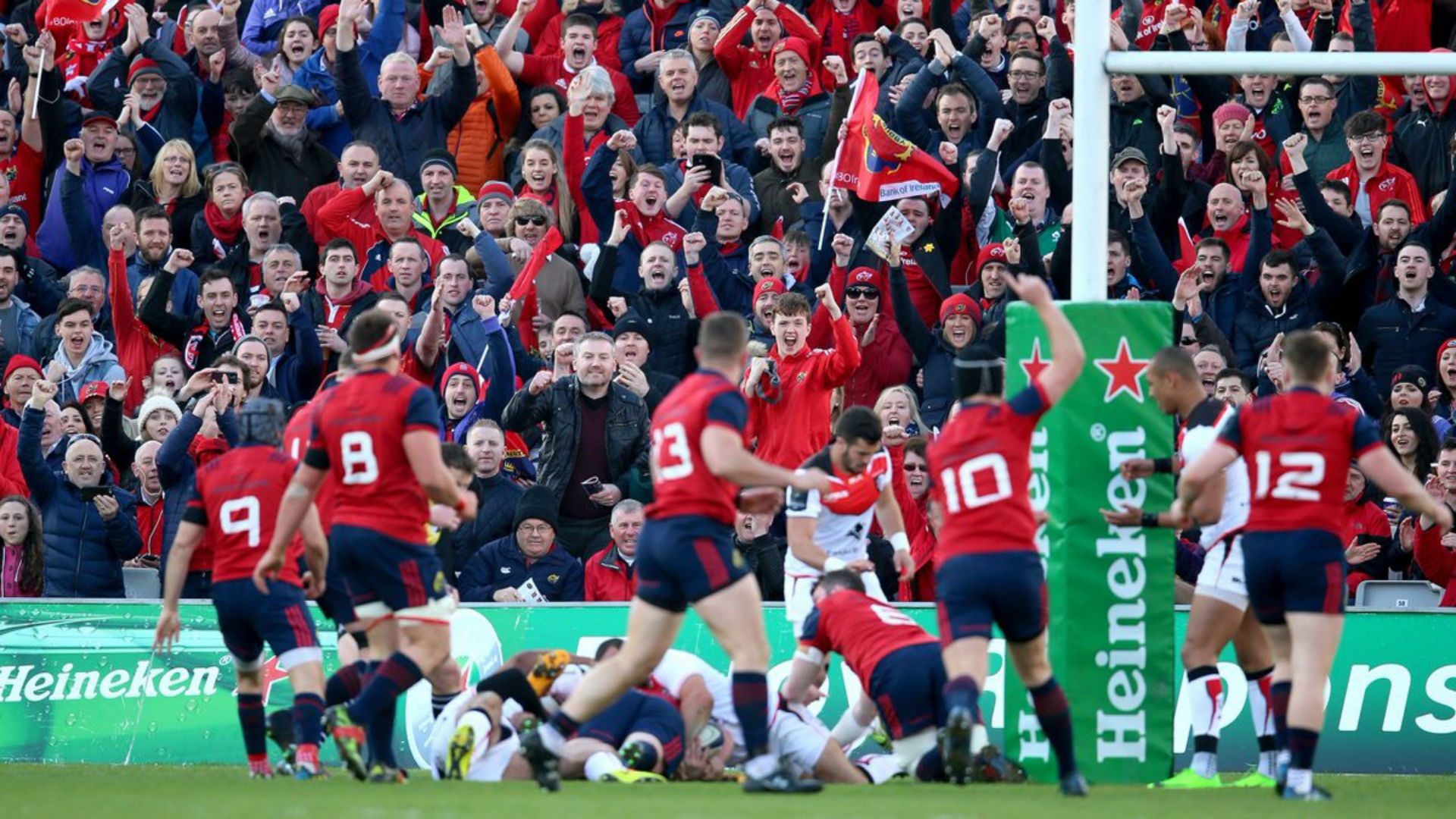 Mauling is a lot more sophisticated than it looks. To the uneducated, it can look like a large group of men shoving each other around – and that is part of it, of course – but it’s a lot more complex than that. Think of it like a free form scrum that you can arrange any way you want and that you contest at dynamic angles.

Mauling is the ultimate psychological bludgeon. Get dominance here, and it can send a powerful message to the opposition.

There’s f**k all here for you today.

Against Toulouse on Saturday, Munster approached their maul work with this philosophy at its core. It was wholly successful.

Mauling is, as I’ve said before, a lot like combat sports. There’s feints, setups, fakes and misdirection all going on. Teams will sometimes set up two lineouts the same one after the other to separate a strong lifting pod on lineout #3.

In any maul, the set up is the most important thing. The key desirables in your maul set up are time, position and formation – in that order. The faster you can set up your maul, the better. The better position your maul starts in, the more fronts you open up for the defence to worry about and then the better your formation, the more options you have.

Take this one for example.

Munster have a beautiful long maul set up off a midfield lineout and make huge gains from it. I’ve highlighted John Ryan in the GIF to show you the important function he’s fulfilling in this early part.

First, he’s a vital part of the maul – the front. It’s vital that he stays square as long as possible to keep the heavy Toulouse forward pinned to the edge of the maul. Look at Ryan’s low body position and his work on the Toulouse forward’s leg to stymy his push. Ryan is keeping this big lad pinned here, where he’s essentially pushing against Ryan and not the main maul.

Look at the tail of the maul from a Munster perspective. Straight backs, great body angles, and look at the footwork – they’re outworking Toulouse here and getting great ground as a reward.

When Toulouse eventually stop up the first maul, the tail separates and goes again as maul two.

Toulouse expended a tonne of energy stopping the front of the maul, and had to go again to stop the tail. They eventually were forced to infringe and Munster kicked a penalty, with the added bonus of soaking a lot of juice out of Toulouse’s legs.

This two maul set up is like a booster rocket – certain parts are designed to break away.

Sky’s video work on the day meant we didn’t get any footage of the setup, but it was all from a lightning quick throw to the tail. At the tail, Toulouse can’t just shove towards the touchline, they must engage front on front with Munster dictating the angle of engagement.

That time and position advantage meant Munster could use the best formation to damage Toulouse and walk them down the pitch.

Munster’s first try was a great example of setting up Toulouse to act in a way that Munster could exploit.

Munster won a penalty just inside the Toulouse half and went down the touchline. So far, so good. From here, Toulouse will have been expecting an early drive to set the tone. Munster are a mauling team, so it’s a fair supposition. Toulouse will be wanting to stamp their own mark on the maul here too, let’s not forget, so the importance of this first maul is vital. Let’s look at how it went.

First of all, that’s a strong counter shove from Toulouse straight off the bat. They’re obviously pumped up for this contest and they end up infringing fairly obviously at the side.

Munster would continue to maul after this, but the initial initiative is lost and we get another pen. But what have both sides seen here?

Toulouse have seen Billy Holland take the ball at the front and Munster mauling close in.

Munster have seen this powerful jump/defence pod come in strong with a touchline push.

With another 5m lineout coming right up, Munster make a decision to disrupt this powerful pod for their next drive by feinting them out of position. Here’s how they did it.

Holland moves strongly to the front to feint like Munster are going to the same move. The set up is almost identical, with Kilcoyne at the front, Ryan behind Holland and Stander 5m back. Maestri backs himself to challenge Holland, but he’s been feinted. The big French lock plants his feet and crucially, goes for the jump regardless.

This is exactly what Munster wanted when they called this cycle back move. We’ve used it a lot this season to great effect. Scannell hits a peach to the middle for O’Donnell to take the ball cleanly.

Munster lose initial ground without much in the way of a counter – it seems easy for Toulouse.

But it seems that Munster are drawing our their strong push. The pod I highlighted previously are now back on the floor and ramping for contact. When Maestri and Tekori hit, Munster transfer the ball to the real maul. Have a look. I’ve highlighted the transfer.

Toulouse lose three of their heaviest maulers – Johnston, Maestri and Tekori – with that push and pull transfer. Munster are in position to make good ground.

Toulouse get away coming in from the side, but Munster have the momentum to attack the line from the break.

This “two maul” philosophy, coupled with advanced feinting and bluff/counterbluff movements gives you a lot of options as an attacking side. You can go with your first option if the feel is right, but you’ve always got that alternate to go to if the opposition goes too heavy one way or the other.

Munster’s maul defence was equally impressive, and Toulouse got little change here for most of the game. Their first opportunity to put a marker down on Munster game right at the end of Cros’ sin bin period after a bad slice from Bleyendaal on an exit. This was a huge opportunity for Toulouse to show Munster what they were all about after the two mauls I highlighted earlier in the piece.

Let’s have a look at what they would have seen.

Two difficult things for the hooker here. One, the sun is right in Ghiraldini’s eyes and that makes things tricky. Two, and probably worse, Peter O’Mahony is at the the front of the lineout. There are few things worse in world rugby right now if you’re a hooker.

O’Mahony’s presence at the front of the lineout means that the hooker loses all wiggle room. The front of the lineout is supposed to be the “bail out” spot but O’Mahony can turn what should be a reliable, safe option into a lottery. Toulouse probably would have gone top the middle if O’Mahony wasn’t here and, even though they claim the ball, it’s in a less than optimal place.

Why is this? We spoke about time, position and formation earlier. Peter O’Mahony makes the first two quite difficult and this impacts the success the latter. Let’s examine them.

O’Mahony’s presence at the front of the lineout demands the hooker to throw over him. If you’re throwing a ball “up” it’s a slow ball and that time gives Munster (or Ireland) a few extra heartbeats to get set against you or get a secondary jump in the air to challenge the high throw.

Flat is fast. High is slow. For most hookers anyway. Look at this example from later in the game.

The hooker is trying to avoid O’Mahony with a high toss, but the ball is so slow O’Mahony can get it regardless of getting the position wrong. Disaster for Toulouse.

Time is money in the lineout, and O’Mahony is expensive.

O’Mahony’s presence at the front means that Toulouse have a decision to make – go high and slow, or contest fast ball at the front? The former is more risky than usual with O’Mahony there but the latter is a straight 50/50 contest where the prize is a maul in the worst spot you could have for a drive – right by the touchline. That isn’t so bad on the 5m line, but further out it gives you a bit of a headache from an attacking perspective. There’s a lot of distance to cover – even a metre or two – where you can get shoved into touch.

And this positional problem turns into a formational one for Toulouse.

Toulouse claim the ball at the front and have to go to some effort to claim it cleanly. They bring Camara all the way from the back of the lineout to lift Maestri at the front.

This hasn’t separated O’Mahonyor moved a support pod out of the way. Even though Toulouse claimed the ball, they aren’t in a great formation to make headway.

Their heavy guys have to come around the corner to join the maul from the back. If they don’t make those extra footsteps, they’ll shove towards the touchline.

That leads to a bunched formation, which makes Munster’s defensive job a little easier.

Now that Munster have affected Toulouse’s setup, they can begin to attack the maul. Munster attack Toulouse towards the touchline, as you’d expect but they insure themselves against the peel with a “pin and pinch” move.

O’Mahony and Stander are “pinning” the ball carrier on the far side of the maul with a straight shove, while the main body pinches in slowly towards the touchline. This does two things;

2: Opens a front for O’Donnell to attack.

This allows Munster to attack the maul constantly, removing barriers to the ball until the main shove can go straight through.

Look at that power from Ryan at the end as the exclamation mark. Nothing for Toulouse here.

Power, technique, brains – the perfect mauling combination on either side of the ball.