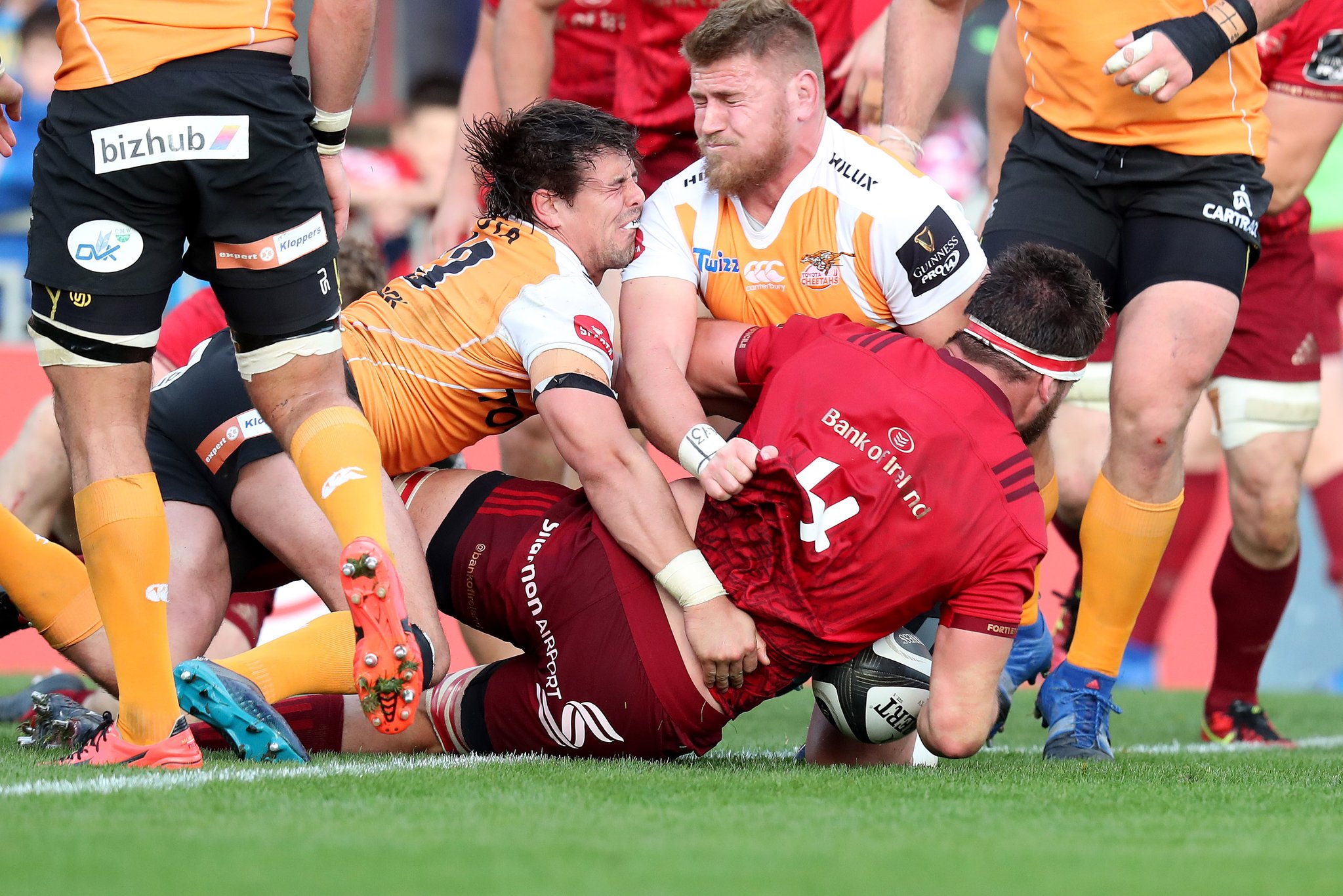 As a starter play, a maul can be better than any almost any other “set piece” when it comes to making and exploiting space. The All Blacks base an awful lot of their best work on the space generated from the lineout maul, and with good reason. Unlike scrums – which have a limited range of forward movement and are especially prone to premature “use it!” calls from sir – a maul can continue to eat space as long as you maintain a modicum of forward movement. Mauls can collect multiple players and create massive number up overlaps as long as you can maintain momentum.

Attacking off a good maul platform is, for me, the gold standard platform to build attacks from. This season, as I’ve discussed quite a bit, Felix Jones was tasked with evolving our attack and our work off the maul (or within a phase of it) seems to be a primary focus of our pattern play. And rightly so – Munster’s maul has long been a weapon that demands consistent opposition attention to stop and with that attention comes opportunity.

Against the Cheetahs, four of our eight tries came within 3 phases of a lineout maul. I’ll get to our patterns off those mauls in a minute but first, I wanted to focus a little on the maul set up and some of the new things we’re doing there.

Any maul is only as good as its setup. If you don’t set up your maul with enough finesse, you run the risk of losing ground at best or turning the ball over at worst. Munster have been particularly good at this aspect of the game over the past while, with last season a particularly good one for maul set ups.

It helps that we have some intelligent lineout operators – Billy Holland, in particular. You can tell he’s a real mechanic when it comes to the lineout – and a guy who’s spent a lot of time in opposition to the likes of O’Mahony/O’Connell/O’Callaghan/O’Driscoll in training because he knows the difference a half a second here and there can make to a successful maul defence.

Look at this little move he ran at least twice vs the Cheetahs.

See that? A subtle little bump into the front lifting pod that kills the counter lift and makes a pocket of disruption for the maul to surge into. That half second of disruption is all that’s needed to create a successful maul platform.

As this maul develops, we get our first good look at Munster’s attacking pattern off the maul but first – look at the length of Munster’s maul.

Why do this? There’s a few reasons;the first is obvious in that the ball is impossible for the opposition to get without swimming up the side of the maul and giving away a penalty. The second is a little more subtle in that it gives you a few extra seconds of forward momentum if the front of the maul stops up – this gives the ref a picture of a maul still in motion. That can buy a few extra seconds to set your attack or allow the “tail” of the maul to snake around the corner and continue the maul. You run the risk of “truck and trailer” in these instances, so your bind has to spot on, as it is in this instance.

Before we look at the pattern off this maul – have a quick look at Darren Sweetnam and Duncan Williams’ work on the blindside of the maul, right before the break.

See that? They draw one defender away from the openside and pull the winger out of the back field. That gives Munster an extra option – of a kick over the top into the corner – just because of the threatening half decoy they run off the back of the maul.

When we eventually break, that extra defender missing from the openside gives us some nice options to work with. We have access to the Cheetahs outside edge with one medium range pass off Keatley’s left side. Look at the options here.

In the end, we go for a kick play which, if not the optimum play in my opinion, certainly put a lot of doubt into Cheetahs defensive pattern on the next maul.

Keatley probably would have wanted a little more movement to the left (as we’re looking at it) on this kick but the space we found here would have been hugely encouraging.

Our second try would be a perfect example of learning the lessons that Cheetahs were teaching us about their wide maul defence.

Let’s look at the maul set up;

Nice deception from Holland in the initial set up and the throw is perfect. The Cheetahs #8 over commits to the jump and he’s on the wrong side as Munster set up. Also, for me, the Cheetahs are too narrow here and allow Munster to set up a “wall” at the front of the maul way, way too easily.

Munster’s setup is really good. Pay close attention to Archer’s wide bind giving O’Donoghue and Holland a nice pocket to push into. Also, look at Liam O’Connor’s lift feint – that detail really sells the Cheetahs front pod on the throw to the front and gives Sean O’Connor a better shot at taking the ball clean.

Again, look at the nice length we get here;

Once we get moving, we enter the second phase of the maul where we’re either going to push them deep into their 22 (ideally) or work our attack pattern.

As I showed earlier, our backfield deception once the maul forms has been quite good. Have a look; At this point, the Cheetahs are all numbered up on this maul. Their scrumhalf is covering Duncan right by the maul and everyone else is aligned on their man. Wootton is being loosely covered on the far wing.

At this point, we see Sweetnam begin to “set” his man to the blindside wing. As we’ll see later, Sweetnam’s role on this play is to come inside as the second pass option but to do this successfully, he has to stick his man to blindside of the maul.

Watch how he tracks right behind the maul to keep the blindside winger and first defender interested; He does a really excellent job of selling these three defenders on his threat on the fringe of the maul. While all this is happening, the maul continues to creep forward which means the Cheetahs midfield defence has to creep backwards with it.

We’ve stacked Taute and Farrell outside Keatley which is a very credible carrying threat off a maul like this and when we finally break, we hit Taute clean for a first phase hit up. Cheetahs have narrowed their midfield defence to deal with the threat of Farrell and Taute. Sweetnam has shot off his wing to be the pass option on the second phase and if Munster get the ball back quickly off this ruck, Munster will be numbers up with acres of space to work with.

Williams gets clean ball, the forwards have had to resource the ruck – and are stuck on that side as a result – so all Keatley and Sweetnam have to do is isolate their men and put the ball through the hands. Let’s see how it played out;

Conway overruns his line ever so slightly, but it doesn’t matter to Sweetnam – he dings a superb miss pass straight to Wootton for the finish. Not great watching for the Cheetahs blindside wing in this instance, although I doubt there was much he could have done about it.

We ran a variation of this play off a maul for another score later in the half, this time without the ruck option;

Taute pops one out the back door with Farrell as decoy runner, Keatley feeds Sweetnam who sets Conway and Wootton away for the try.

These were just some of the excellent maul patterns we ran against the Cheetahs and it’ll be fascinating to see what we bring to the Ospreys in Round 3.