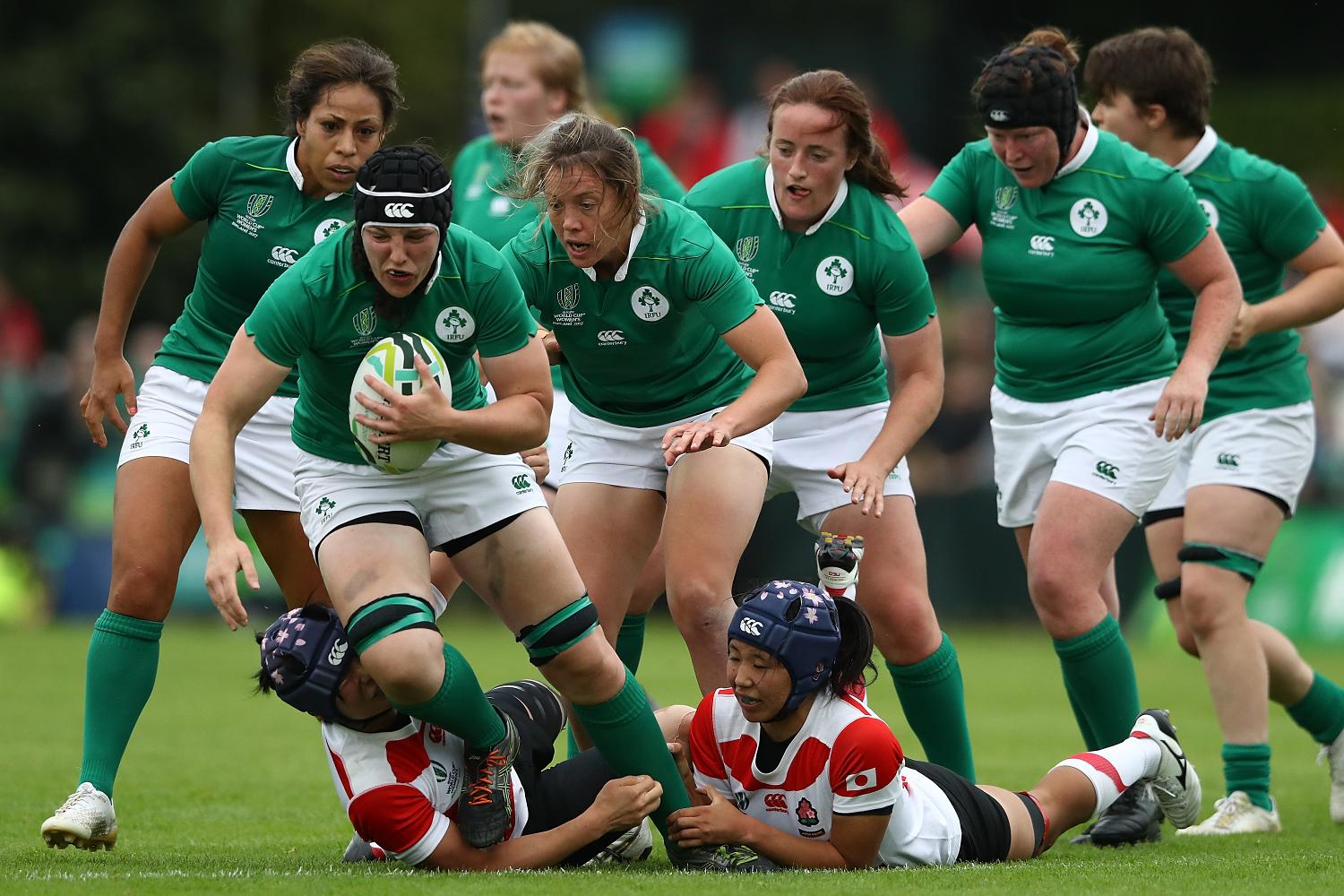 The GIF Room :: Forcing It

On paper, this second pool game against Japan was a bonus point waiting to happen but on grass, it ended up being much closer than anyone in green would have been comfortable with. But should we have been that surprised? Ireland played Japan twice back in June and the pattern of both of those games was broadly similar to this pool game – especially the first trial game on June 3rd when Ireland had to come from 22-12 down in the last 10 minutes to win by two points.

In that context; this game was the near perfect storm for Japan. They came in with great knowledge of Ireland’s systems, they had a few go-to gimmicks to frustrate Ireland’s game plan and they met an Irish side that looked a little undercooked mentally and physically. That’s all the ingredients you need to pull off a famous win and they almost managed it. From an Irish perspective, this was an incredibly disappointing performance and one that has few redeeming points going into this Thursday’s do or die pool game against France.

This game (and, if we’re looking through the prism of France’s performances, the Australian opener) were points dropped and took away Ireland’s shot at possibly qualifying as a best runner up. That leaves one 80 minutes left to save the World Cup campaign with no margin for error.

For me, a lot of the problems came from Ireland’s nervous play, disappointing set piece and muddled structure outside 10. All the bad (and good) parts of Ireland’s performance could be seen in the opening quarter of the game, so I thought it might be useful to look at some of the sequences that caught my eye in that period.

Ireland mixed the good with the bad in almost equal measure in this game, and no more so than in the backs. I think a lot of the issues came from a muddled approach to attacking a very mobile and committed Japanese defence.

Here’s an example from 30 seconds into the game;

What do we see here? We have Peat lined up to make a strike on the gain line in centre field – ideally, she’d make ground, move the offside line and give Ireland a good platform to attack off. Instead, she gets met well behind the gainline and stopped dead by two Japanese defenders going low and high.

For me, we’re way too deep here and this depth is asking an awful lot of Lindsey Peat against a very fresh defensive line. We’ve lost 10 metres here – needlessly. I’d like my 10 to stand much closer to the gain line here or kick balls like this to shake up the Japanese line speed early on. What happened here was the worst of both worlds. We lost ground and gave the Japanese an early opportunity to stick one on us with their line speed.

From here, it was a case of damage control and on the next phase, we do what we probably should have done first up. We stick it downfield;

It’s a good kick with a good chase and with better positional work on the kick return we’d have solidly won this battle and be in a great position to counter attack. But depth issues struck again.

When Japan kicked the ball back to us – a solid idea as we were numbers up on them – our back field kick cover was just a little too withdrawn and we let the ball bounce. This happens when your full back (or the player acting as full back) is a little too conservative on their positioning and hangs a few metres back to cover a 40m+ kick that Japan don’t have in their locker. Here, the ball lands with a Japanese player and, in just a few phases, we’ve gone from attacking with good ball on our 10m line to defending on it.

As against Australia, we seemed to be doing way too much on the ball and exposing ourselves to the turnover beyond 10.

I think we need to save our work off Stapleton for when it’s on and not use wide hands just for the sake of putting width on the ball.

Our main system on loose play seems to be based on a heavy forward pod creating a dynamic centre field ruck to give strike options on either side. As I’ve shown before, this kind of centre field ruck is a “blitz breaker” that slows the opposition’s line speed and gives you plenty of attacking choices.

When we tried to hinge this forward pod off 10, we invariably hit the line very deep and allowed the Japanese line speed to slow us down through simple physics. Here’s an example;

Our deep passing draws Japan onto us and times them up for a double tackle.

Yet, when we attacked off 9, we made ground fairly consistently. Look at the difference that Peat makes on this carry just 60 seconds after she carried ball in the first example.

Peat has all the momentum and the Japanese blitz has nothing for her when they don’t have 10 metres of space to build up speed. She makes a dominant carry over the gain line and gets Japan jogging backwards at pace. Why? Because she gets to use her power over short distances that take out the Japanese willingness to put the body on the line.

But our next phase is just too deep again, even though it leads to a break.

Our decoy work off 10 isn’t convincing and all it does it take numbers away from our wide break, which we make with some good hands from Miller and Nauopu. We work our way up to the Japanese 10m line with a decent – if lopsided – surge. It’s lopsided because all of our backs end up trapped on the blindside of the next phase and that presents a double edged sword for Ireland.

We have an overlap, but no distributors to exploit it. Have a look;

Once this ball recycles, you can see the numbers at play (look at Peat signalling) but – crucially – there’s only forwards outside the 10. Stapleton can only pass so far from this position as the girls inside her are burned up in the ruck.

This comes down to Ireland’s continuing issue around attacking alignment in phase play.

Ideally, I’d like my midfielder almost tracking my 10’s support line to act as a wide platform. Instead, our 13 is on the far wing which I can’t be too critical of as she’s thinking about finishing, but let’s play it on;

We go 10 > 3 > 1 > 6 with our outside centre cleaning the ruck. Not ideal – even with the ground made. Look at the drift on our running lines here; we’re not sitting down any defenders and we’re just leading the Japanese line onto our wide pod. We lose the ball a phase later.

With a better use of attacking resources, we could have been in business here. It would be a familiar pattern throughout the game.

With France on the horizon, Ireland will need to tighten up almost every facet of their game. I’ve been mentioning it since the Australia game but I think if Ireland are to go to their potential in this tournament they have to keep it tight. That means a lot of kicking, a lot of defensive lineouts and a lot of hammer and tongs defence. Against Japan, our defence was very poor. After 56 minutes, we had missed 18 tackles to Japan’s 8, even though we had most of the ball. This won’t do against France.

Our defence on transition (turnover ball) hasn’t been great. At times, it seems that the less ball we keep in hand the better because when we lose it, we lose it in critical areas like undefended wide channels or broken field.

We need to kick better and in this game we showed glimpses of what we can do with the boot;

This was a great option on phase 11 inside the first 5 minutes and it led to some good territory.

This is ideal. We move the ball almost to the tryline with no hard carries and no passes – just a strong chase. Japan are under huge pressure and they’re turning and chasing after the ball; this is the way to maximise your finite energy on a rugby pitch.

This kick option in the second half put us back on the road for the equalising try.

We were deep – but not too deep – and we kicked handily into space for our winger to chase. In this instance we got territory but if this ball stood up? I’d back Miller to make something happen in that much space.

With a little more use of stab kicks and grubbers, I think we can take more advantage of our excellent carrying off 9. When I see passages like this I can’t help but think a dab in behind would be better than hitting the second layer.

If we play it tight against France, let the ball do the work and hammer them in defence on phase play then we’ll have a shot. There’s no doubting this Irish team’s guts, grit and determination to make things happen and I believe that they can do it.

One way or the other, it’ll be must-see TV.