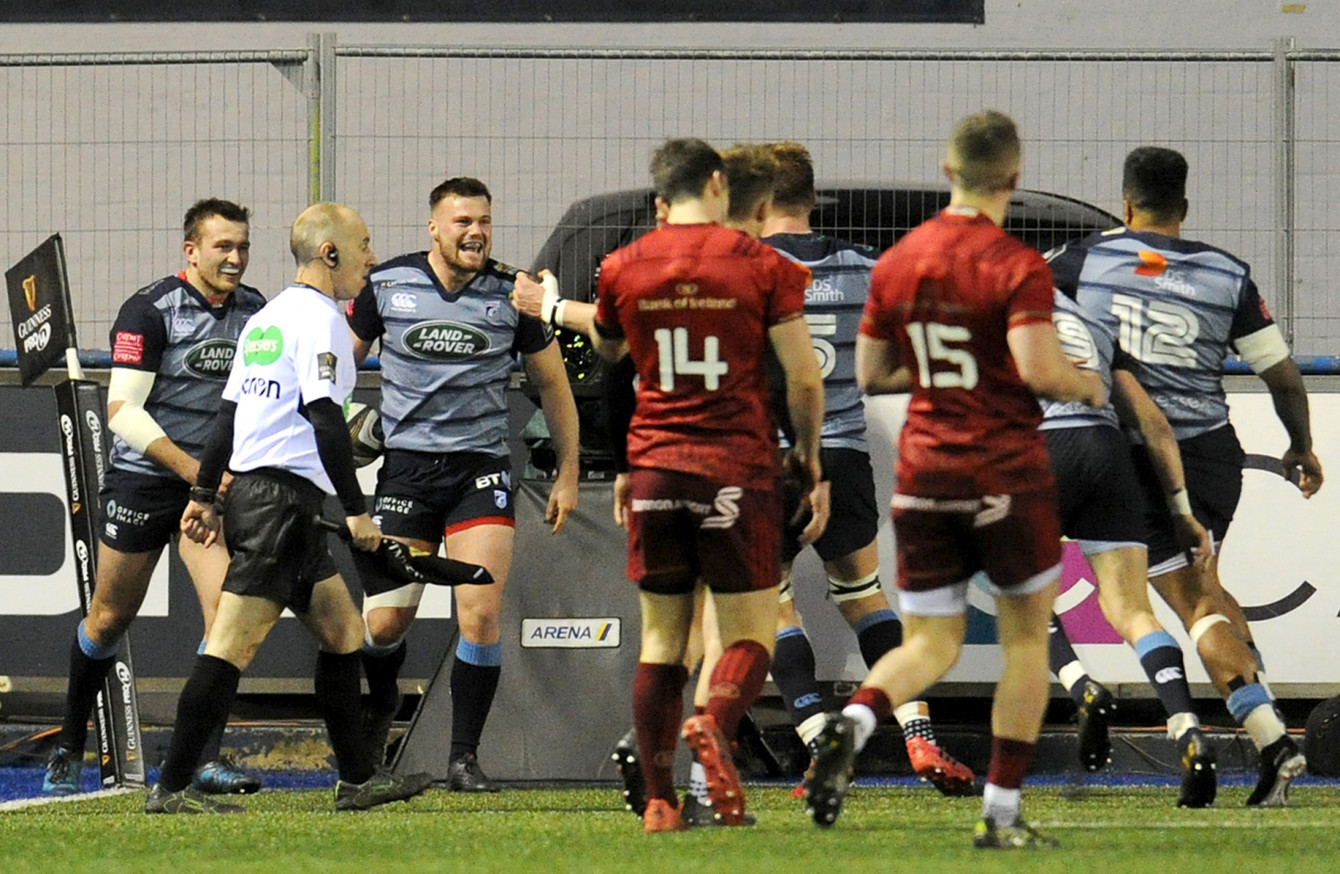 I know you don’t want to read any more stuff about that Cardiff game.

I don’t want to write it, either. But with Glasgow coming up on the horizon tomorrow, I thought it might be good to look at the errors that lead directly to Cardiff’s three tries to see how we might avoid coughing up soft scores in Nigglefest 2018. There are a few little details that Glasgow will have identified in our defensive setup that they’ll look to exploit.

Let’s hold our noses and get through one last article on this game before forgetting it completely.

After Cardiff made good ground from a front lineout move (a little more ground than we’ll be happy with, it must be said) we found ourselves defending our 22 against a fairly stacked attacking line.

The biggest killer here from a Munster perspective is that we didn’t get a “stop” on the ball until three phases into the defensive set. That meant we had a tonne of disrupted space on the openside that we needed time to reset. 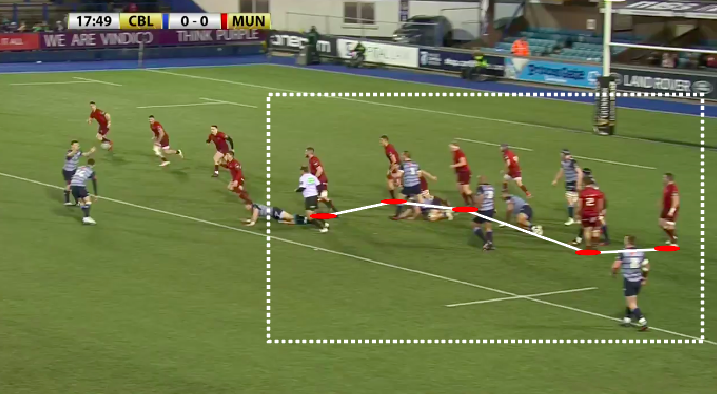 That’s why Cardiff took out Chris Cloete well beyond the ball and held him on the floor long after the ball had moved beyond the ruck. Either way, we lost the initial gain line on Filise’s carry, didn’t get a stop on Cardiff’s ball and we were scrambling thereafter.

Once Keatley made the tackle that ends that GIF, we entered a crucial phase of defence on our first set ruck. Our reset would be crucial.

This is the kind of breakdown that Chris Cloete would be all over, had he not been caught off the ball on the first tackle. We needed to get hands on the ball here to slow down Cardiff’s attack and give us time to align properly. Scannell does a decent job but doesn’t get on the ball early. From there, I think O’Shea makes an error in folding around to the blindside of the ruck, which exposed Ryan in a loose “A” defensive position. 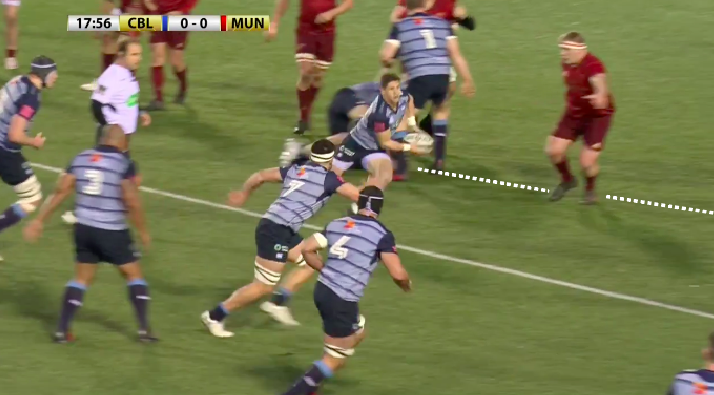 This is exactly what you don’t want in a defensive structure. Let’s see how it played out;

Ryan got scorched on the outside after Marshall’s poor read and we just can’t stop the ball once Cardiff start moving in narrow offloads beyond the gain line. When we eventually get Williams over the ball, it’s not enough to stop Cardiff reloading and getting the ball into space out wide.

What are the lessons here? We needed a big stop, some structure and possibly someone to eat a penalty/yellow card for the team at some point. Sure, Cardiff had a few infringements off the ball and beyond the ruck (and at the ruck) but we didn’t put ourselves in with a chance to test the referee’s consistency with that at the other end of the pitch.

We had very similar issues happen against Racing 92 in Paris in the opening 5 minutes of each half, so this kind of “no-reset” scramble that gets forced by narrow offloads beyond the point of contact is something that Glasgow will be looking to exploit.

We almost coughed up another try right before halftime for the same reason.

We didn’t get effective A defenders in place at the ruck and were punished for it. Sure, Cardiff got a little lucky with their overthrown lineout landing straight into their tail gunners hands but they knew how to attack us thereafter. Only a big Copeland steal under our posts saved the bonus point try from being conceded here, but how Cardiff even got this ground in the first place is worth looking at.

We needed to be a bit better on the initial contact.

Cloete does his job in bringing Filise down but I felt that Keatley could have picked a better option. By going for the rip on Filise, he prevented Copeland from getting over the ball and blocked Marshall from getting a pillar in place next to the ruck. For me, the best option for him here was to narrow as an A defender, give Copeland a chance to get over the ball and then file out into the line as re-enforcements arrived but it’s easy to say that after the fact.

This was the key moment of lapse after the ball went beyond Filise’s carry off the back; 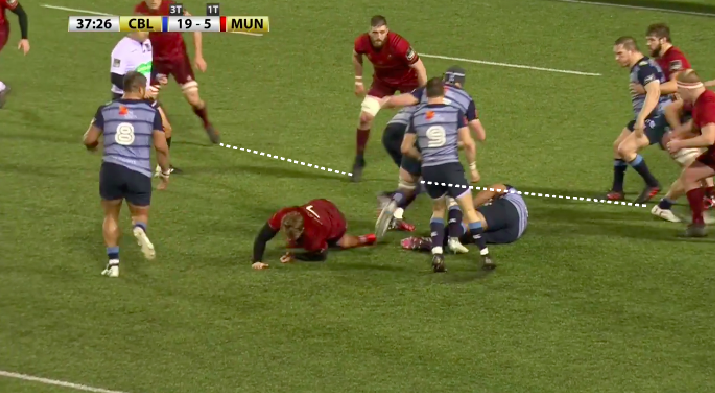 No ruck structure, too much pace on Cardiff’s ball and a heavy defender defending way too much space. How that space was created is another thing entirely;

Ellis and Gethin Jenkins took out two Munster defenders beyond the ruck. I’m not sure how that was missed by Berry and his TMO but – again – we didn’t put ourselves in a position to exploit his blindness to this kind of thing.

How do we stop this kind of attack?

We have to effectively double team heavy carriers and give ourselves time to build a defensive structure. Glasgow probably won’t get away with the kind of beyond the ruck stuff that Cardiff pulled here but if we give them quick ball like we did Cardiff and the angles to attack us with narrow offloads, they will score tries.