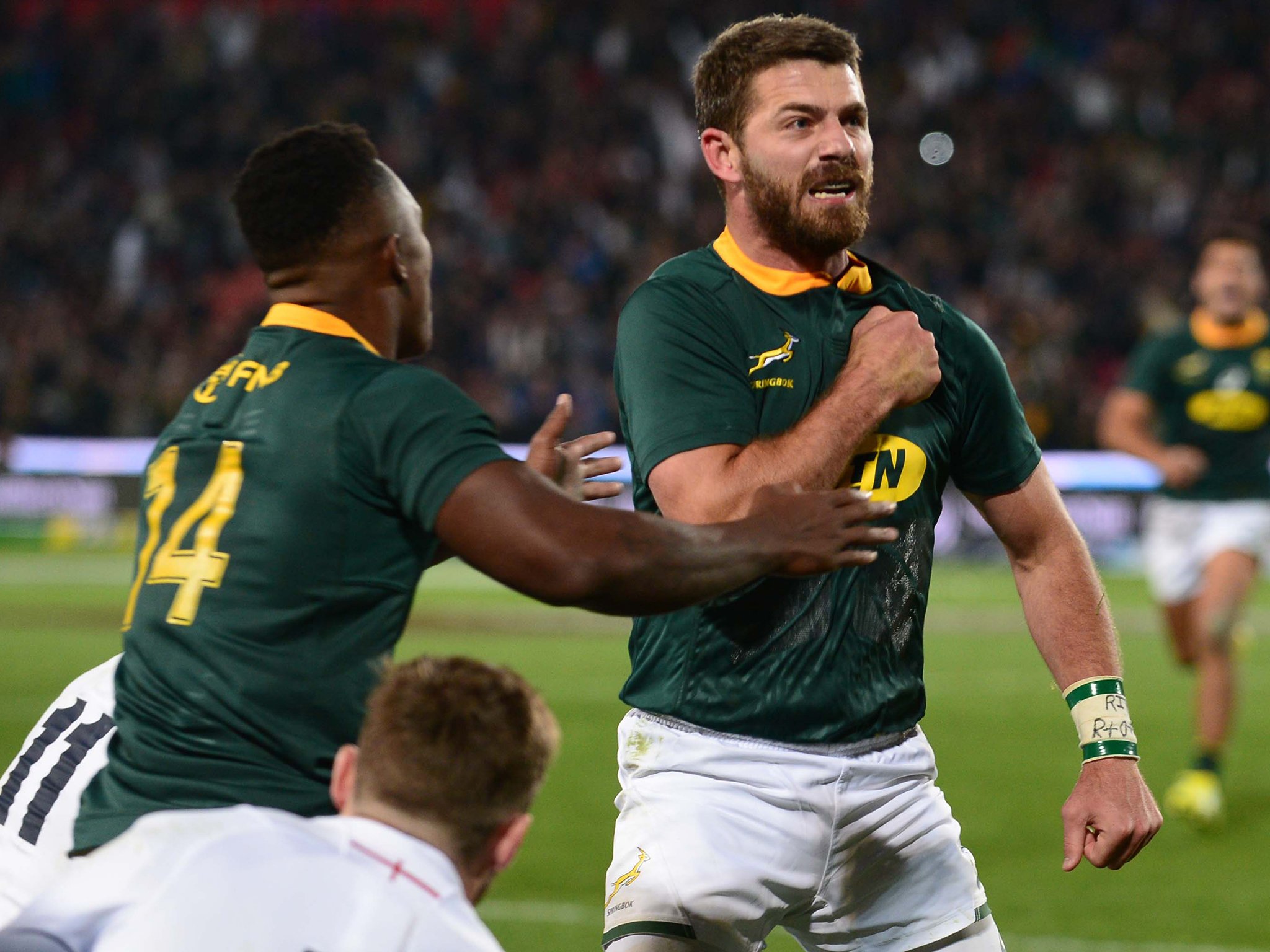 Le Roux is a vital component of the Springboks attack.

The more I see of Le Roux and Pollard play for the Springboks, the more I’m reminded of “having your cake and eating it, too”.

The reason I say that is that South Africa are currently using flyhalf Handre Pollard and fullback Willie Le Roux as “double pivots” in their back to back series against the Pumas over the last two weeks. The other character in this story of double pivots is their inside centre André Esterhuizen, and I’ll get to him in a minute. First, we’ll examine how the Boks structure their attack with Pollard and Le Roux as double pivots. 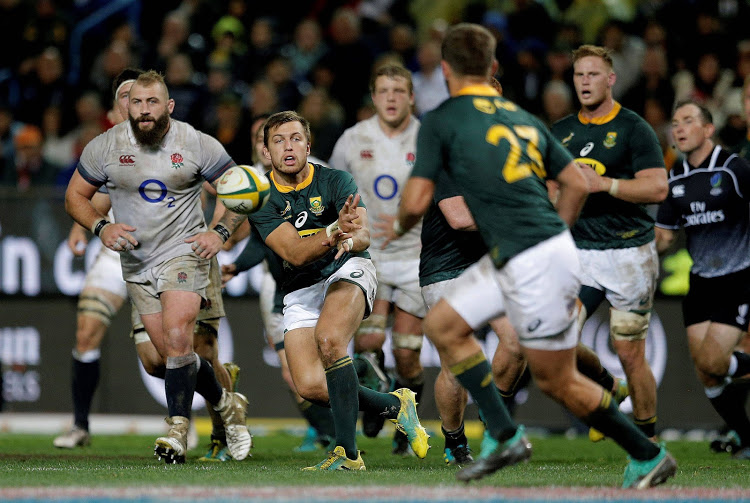 Most sides will use multiple pivots to play off in the backline at some stage in a game. In practice, this means that a player will rotate in as the first receiver on a good percentage of phases. Normally those roles are split between the 10 and 12 but splitting the duties between 10 and 15 is pretty common too, and that’s the structure I’ll be looking at here.

When you talk about pivots, you’re really talking about how a side uses their strike options in the backline. When you have one primary pivot – à la Sexton – that means your strike options are all at his disposal and, with Ringrose as a wide passing platform and running option, you can carry a Kearney, Henshaw, Earls, Stockdale backline without losing any creativity or danger on big openside plays. Why is that? Because everything flows through Sexton and Sexton alone in most cases.

When you play with double pivots, you need to alternate your options and construct a different way of playing.

Here’s how South Africa look on a lot of their phases;

As you might imagine, both men see an awful lot of the ball when the structure like this. In the home test against Argentina, Le Roux had 5 kicks, 21 passes and 8 carries with Pollard having 4 kicks, 22 passes and 7 carries. South Africa won that contest 34-21.

This past weekend in Mendoza, during South Africa’s 32-19 loss, Le Roux had 6 kicks, 23 passes and 13 carries (and 2 assists) with Pollard having 5 kicks, 15 passes and 15 carries. Those numbers show how much of the Springboks attacking load is split between 10 and 15. When it works, it looks good.

You see Le Roux taking the ball in the wide channel, putting his man away and then resetting to the second receiver to take a pass from Pollard before slinging a perfect pass for Mapoe on the edge for a try.

Two huge moments from Le Roux and a perfect outcome for the Springboks.

But my question is this; by using Le Roux so often as the first receiver on more static plays, are they taking away one of the best wide threats in the game on 50% of their plays?

Le Roux has pace, great footwork, a kick pass, and excellent passing and offloading skills on either side. In my opinion, when he mainly operates in this position… 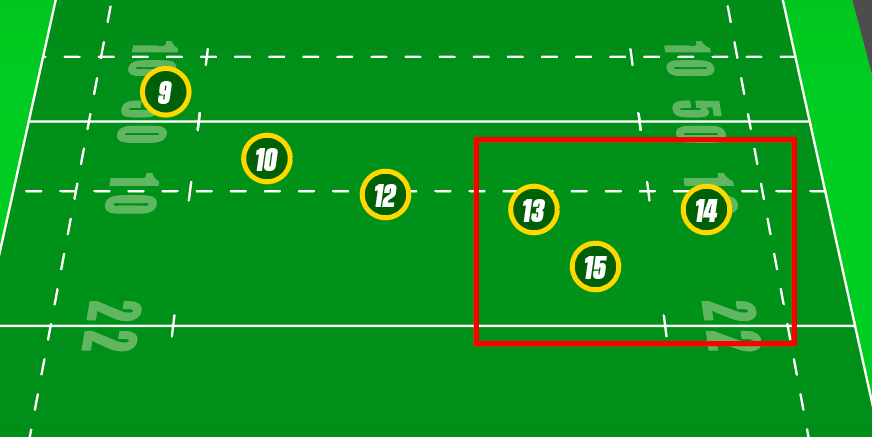 … he is amongst the very best in world rugby with what he can do in the wide areas. With a heavy option and pace option to work with, Le Roux can create try-scoring opportunities for himself and others. That can be a big outside centre or a forward with pace like Whiteley, but he needs to be the guy on the end of the movement, not starting it. But he can’t do that at first receiver.

Le Roux takes this ball at first receiver and sends the ball to Pollard, who’s behind a heavy screen of forwards. This construction – Pollard behind a midfield screen – is something that having Le Roux at first receiver gives you.

The move works as planned but the only problem was the end of the scheme. You generate an angle – with good numbers in the 15m channel – and you want Warren Whiteley to be the one to crack a wide defence as pacey as the Pumas? 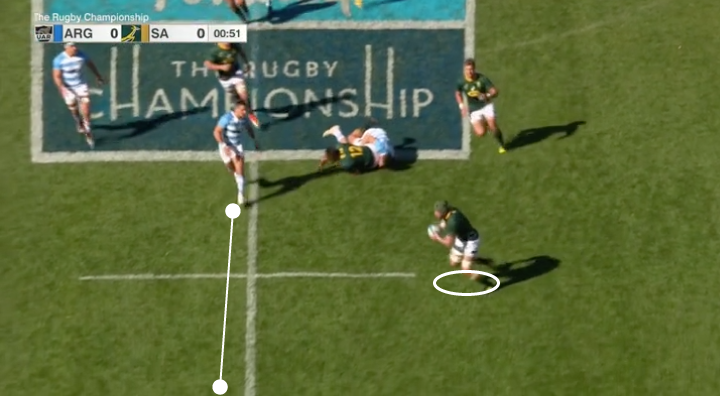 And look at the initial construction; Le Roux’s pass is good from the first receiver position, Pollard’s is less so but when the ball gets wide as planned, I’m thinking “wouldn’t that be where you’d want Le Roux?”

So what does this mean?

It means the Springboks have a selection dilemma. This isn’t just about Pollard, Esterhuizen or even their back row – it’s a combination of all three.

Let’s take it that Le Roux is a nailed-on starter. How do we get the best out of him?

I think you do that with your pivots being at 10 and 12 if your gameplan is to dominate possession.

As it is, South Africa’s current alignment in midfield has Pollard as a floating #10 with a decent kicking game, a decent carry and subpar passing and tactical thinking for test level as he currently stands.

That isn’t to say that he can’t develop these things but right now, you can see why Rassie has Le Roux stepping in at first receiver to take some of the pressure off Pollard.

Here’s a good idea of how that works from the home game against Argentina.

Le Roux’s work at first receiver is really good here. He takes the ball to the line, commits defenders and then fires a perfect pass to Pollard (again, behind a two-man screen) who can fire the ball out to his two heavy midfielders and South Africa are off down the line after beating the blitz. Pollard’s pass is good – that’s his good side – and Esterhuizen does well to get the ball beyond the tackle, as he usually does.

Am’s work is decent in this instance but, again, I think he took a little bit of momentum away from the electric Mapimpi. Again – wouldn’t you want Le Roux in this position?

If South Africa had their pivots operating closer to the ruck from a positional sense – 10 and 12 – then you leave your fullback to strike in the wide areas. Essentially, if you have Le Roux standing at first receiver 50% of the time – and it’s close to that number – then you naturally lose something once the ball gets to that outside edge.

It allows South Africa to have a heavy ball carrier in Esterhuizen, a strike runner and decent passer/kicker in Am, and two power/pace wingers in Mapimpi/Dyantyi.

The way the Springboks line up often means that they have Am, Esterhuizen and one of the wingers as being the finishing combo on edge plays.

You can see a classic example of Pollard to Le Roux here, but the accuracy of the passing from Esterhuizen puts Am under pressure, even if he does get a good left-footed kick out of it. In my opinion, Le Roux and Pollard’s double pivot strategy puts too much creative pressure on Am and Esterhuizen, who have 9 caps between them. At test level, they don’t have the accuracy in their running or passing to take advantage of the edge plays that are so crucial to modern attack.

South Africa need to find a 10 and 12 that can relieve the creative pressure on Le Roux closer to the ruck on big openside plays. If he is free to play in those outside channels on most of his possessions, he can fill a “Ben Smith” type role for the Springboks that will bring the likes of Am, De Allende, Esterhuizen, Dyantyi and Mapimpi to the next level. If not, Le Roux will still make plays from first receiver but at what cost to South Africa’s attacking efficiency against the Wallabies and All Blacks? Essentially, what use is getting good ball to the outside edge if your best attacker doesn’t get his hands on the ball in the same sequence of passes? This is the problem with trying to have your cake and eat it, too. Munster found this last season too – with Keatley, Scannell and Zebo we almost had too many hands and not enough runners at times.

Is it Jantjies at 10 and Pollard at 12? Do you roll the dice with that combo knowing the defensive issues it’ll create? Is it bringing Pat Lambie in as a primary pivot and using Esterhuizen and Am (or Mapoe) as bruisers with Le Roux as a wide creative outlet?

If South Africa are in intent on backing their kicking game and sticking with pressure defence, then Pollard/De Allende/Am with Le Roux as a floating first receiver and wide creator might be the safest route to transition into a World Cup year. Whatever happens, Le Roux must be a critical part of their game.

Either way, what they have right now isn’t working for them at building the kind of pressure they’ll need to tangle with the Wallabies and All Blacks in the coming weeks. Shooting it out with the Pumas is one thing, cracking Barrett, Crotty, Goodhue and Smith is another thing entirely.