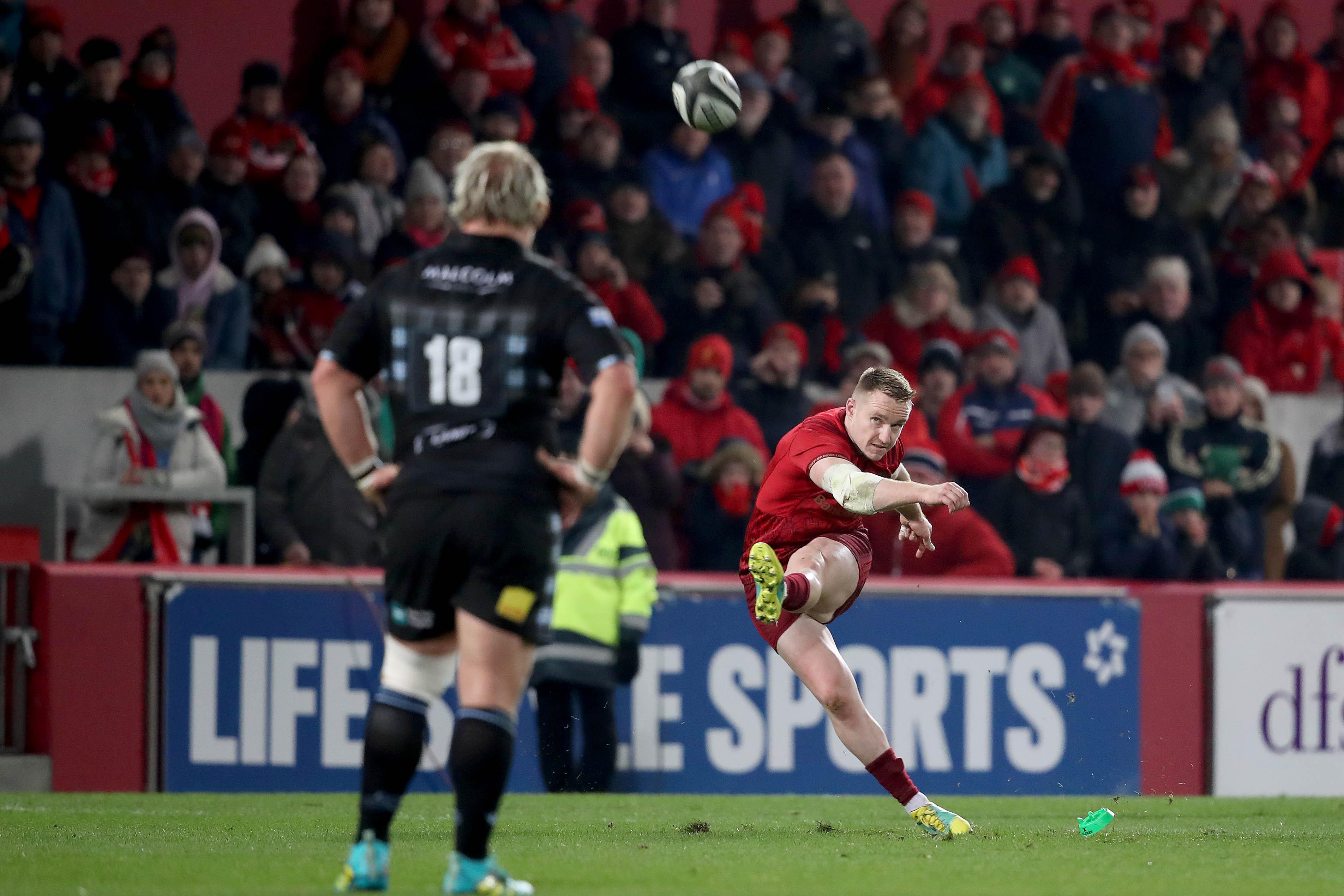 The headlines are Rory Scannell’s, and rightly so.

Kicking the winner with the clock gone red from forty-five metres out against your biggest in-conference rivals is the kind of stuff you dream about doing when you’re a kid (and a back). The images of Scannell’s kick and the resultant celebration are the ones that’ll be burned into the memory when people think of this game. For me though, it’ll be this one. 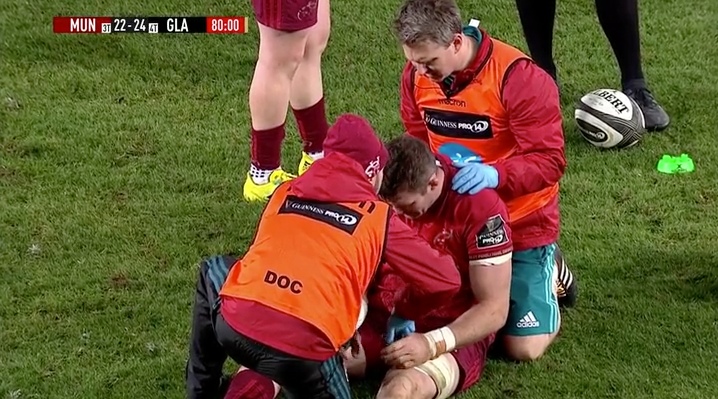 It’s the captain, Peter O’Mahony, receiving treatment after taking a battering while winning a game-deciding penalty with 16 seconds left on the clock. It was controversial, it was hotly contested (just search for “Munster” on Twitter – actually, maybe don’t) and it was the epitome of dark art, “get the job done” rugby intellect.

If you’re a Glasgow fan – or an obsessed Welsh Twitter weirdo – you hate it. If you’re not either of those things, you’ve got to admire O’Mahony’s problem-solving ability under pressure and against the ticking of the clock.

To understand the end game to this one, you’ve got to first understand the context. Glasgow were defending a two-point lead while in possession of the ball for the last 5 minutes of the game.

Prior to winning a penalty for a high shot in the 76th minute, Glasgow were playing “keep ball” with good width and tempo in a very conventional way. Here they are in phase 13 of a sequence that stretched back to the 74th minute after a Munster kick away.

The resulting penalty went down the line where an overthrow was spilt by CJ Stander – scrum Glasgow with 78 minutes on the clock.

From here, Glasgow’s job would be simple – get the ball out of the scrum, hang onto the ball for two minutes and then kick it into the stands for a 5-1 bonus point win. Ideally, you wouldn’t want to have a scrum in this scenario because it means you have to retain possession for at least 3 or 4 phases while your forwards reset post-engagement. A lineout you can maul for a bit, box kick, chase and align and then see out the game defending the opposition in their half of the field but a scrum? Much tougher to kick from in a way that you can work with while protecting a lead. In these situations, I’d normally prefer to not have the ball because of the risk and reward nature of how the game is refereed.

If you’re defending against a side that’s two points down in the dying minutes in their own half, they’ll be forced into trying to work a drop goal position, buy a workable penalty (which are hard to win in this context) and/or try some high-risk passing or kicking. Ireland’s last minute winner in Paris last spring was the exception to the norm in these circumstances. France had defended Ireland to a standstill and only a once in a lifetime drop goal – from the halfway line, practically – sealed the deal. When the opposition is chasing the game with the ball in hand in their own half, all the pressure is on them to create. All you have to do is defend.

But Glasgow having the put-in to the scrum made it so that they would have to keep possession.

The most dangerous part of the sequence was the initial scrum itself and the resulting break from the scrum to phase play because of the risk of turnover.

Glasgow managed this quite well.

They secured possession and set up a dominant ruck position. From here, they were pretty much locked into retaining possession through narrow phase play until the clock went dead. This style of finish has mostly advantages and one key disadvantage because of the context of the scoreboard.

From Munster’s perspective, they had to win possession back but faced a near impossible job with Glasgow pre-binding and pre-building rucks. So what do you do?

The first thing you have to do is narrow your defensive line and aim your tackles low and at the ball to try and force a spill in possession.

As an aside, Glasgow look to be going off their feet here and sealing the ruck preventing a contest but Munster were very unlikely to get a penalty off the referee for that offence in this context.

Glasgow were taking the ball less than 5m away from the previous ruck to reduce the chance of a passing or handling error and then twisting their body away from the incoming tackle to stop Munster from ripping the ball or forcing a spill.

Munster then began to try to target the “pre-build” as much as possible. Here you can see Stander attack the ball carrier while Holland targets the leg of the latched player to take him off his feet before the ball hits the deck so O’Mahony can attack the ball before a ruck is formed.

O’Mahony is lurking behind the ruck to try and get hands on the ball and force the ref into a decision. It doesn’t work on this occasion.

We’d try this move again a phase or two later;

O’Mahony gets hands on the ball but Jones informs him that a ruck was already formed and he had to get his hands off.

Munster would have to change tack. Glasgow’s pre-binding was making it almost impossible to win the race to the breakdown so Munster couldn’t steal the ball before the ruck was formed. The pre-build would have to be attacked.

Initially, we tried to separate the ball carrier from the latchers by pulling him out of the pod.

We could attack the guy on the floor or, as is more likely, make the latchers fly off their feet to protect the briefly isolated player in an obvious manner that wins a penalty for Munster. Glasgow did that here but, again, most refs won’t call that penalty with a minute left in the context of the game as it was at this point.

Time was running out.

A few phases later, Glasgow could see the end. Just one more phase and they could kick the ball out, knock it on, whatever – it would be all over. Peter O’Mahony had other ideas. Pulling the carrier out of the pod just wasn’t going to work. Glasgow weren’t going to have a sealing off penalty called on them at this late stage of the game so the pre-build would have to be attacked before it hit the deck.

If Munster could separate the ball carrier from his support latchers, it would isolate him on the floor enough to give a jackal a chance. Peter O’Mahony tells Stander to dislodge the latcher as the ball leaves the last ruck.

Holland stepped in to block off the infield support ruckers, while Stander powered through to block off Greg Peterson after his job on Gibbins.

That presented Peter O’Mahony with the opportunity he’d been waiting for – an isolated ball carrier and half a second to work with. 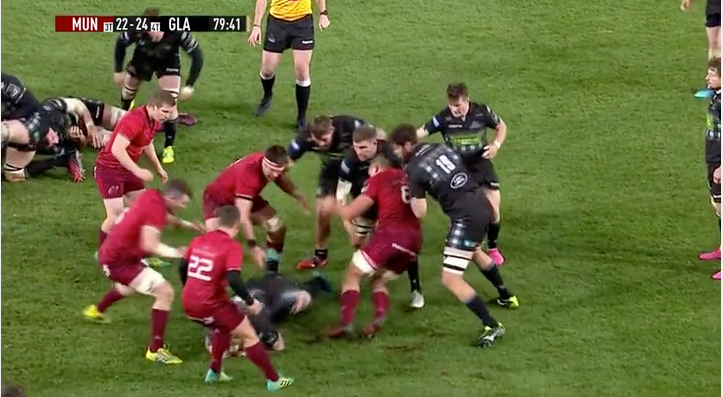 O’Mahony gets over the ball carrier and into position. This is the key part of the jackal turnover. You’re presenting the picture to the referee that you are finally competing for the ball on a ruck that wasn’t pre-built.

You are challenging the ref to uphold the risk/reward part of trying to close a game out like this as long as you survive the clean out long enough to satisfy him.

His right leg pops up off the floor here – which is controversial to some – but you have to look at the situation in context. Munster had defended 12 or 13 narrow phases with Glasgow sealing off with pre-built rucks. When the referee first looks at this he can see (a) O’Mahony on his feet and (b) Glasgow about to fly off theirs. 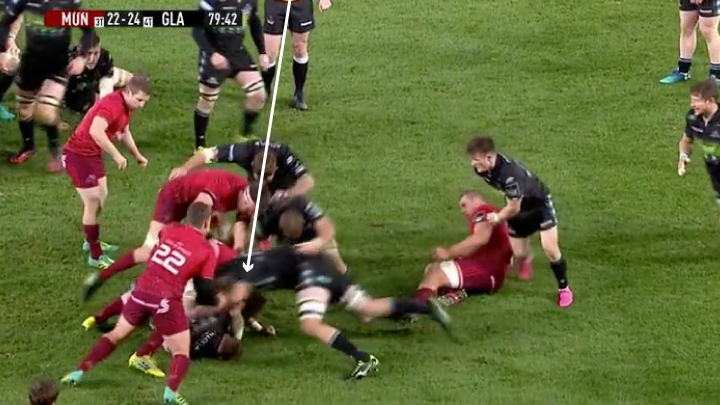 O’Mahony got the reward for his in-the-moment thinking under pressure and for Stander’s brick wall physicality and skullduggery in defence. It was beautiful. Glasgow ran the risk of closing a game like this and lost.