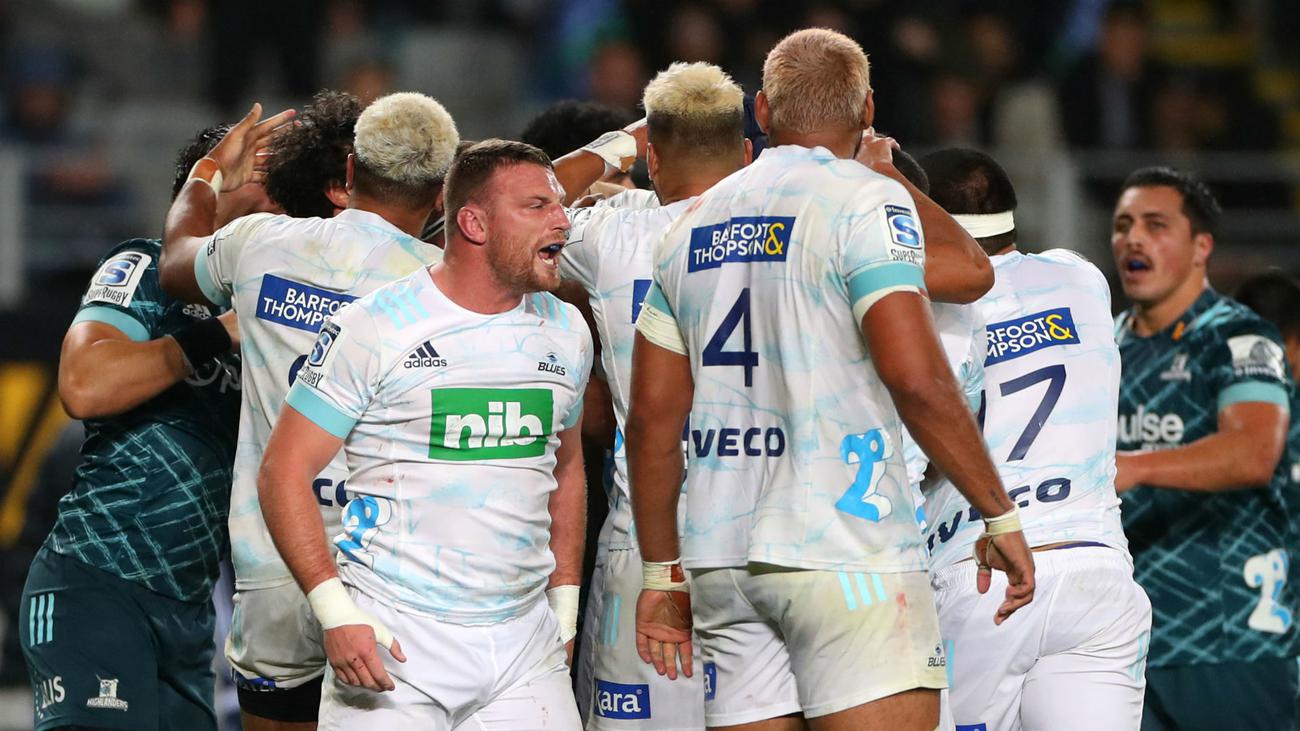 The Blues maul defence was a key part of their win over the Highlanders.

By Tom Savage7 min read
The Blues are three points ahead. There are three minutes left on the clock. The Highlanders have a 5m lineout after a series of penalties put them in position to finish off a pulsating second-half comeback. The catch and drive is coming and how the Blues defend it will define the result of this contest.

This weekend’s Blues vs Highlanders game was an excellent example of these principles and none more so than the maul defence that sealed the win for the Auckland franchise in the last few minutes of the game. But this didn’t just pop up out of nowhere. The Blues excellent maul defence was present for much of the game.

Let’s have a look at this example from early in the contest and break it down afterwards.

This is a dominant stop from the Blues but the start of the maul told you the story of what was going to happen long before the referee did. First, look at the picture before the maul contest began. 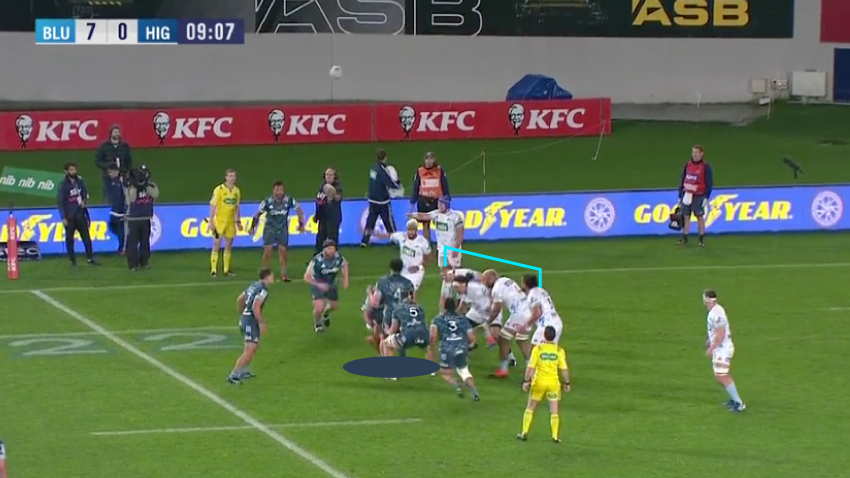 The Highlanders have launched at the middle on a 5+1 scheme but the Blues have stayed on the floor to win the initial contest once the pod comes down with the ball.

Hodgman, Goodhue, Tuipolotu and Tuunagafasi are the Blues’ initial maul defence unit – big, heavy front five forwards – so the Highlanders will need to drop into shape and get momentum almost immediately to win this early contest.

But that’s going to be really difficult. Tuipolotu and Goodhue are pre-bound onto the lifters before the jumper lands with the ball. This gives them a powerful early edge in the shove. 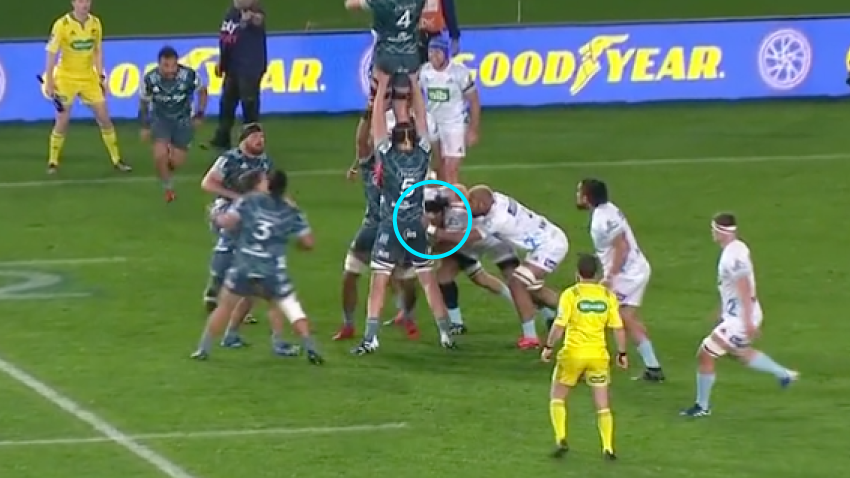 Why is this? You have to look at it like a bind on a scrum. By pre-binding onto the lifters, their body movement will tell you what is happening. The minute you feel the lifters shift their weight towards you, you can hit the maul along the line of your arm and deliver a straight, coordinated punch at the opposition’s centre of gravity.

The Highlanders are also at a disadvantage because of their set up. The “drive unit” of the maul is really separated from the launch pod at the top of the jump so whatever happens, they will hit the maul later than the Blues. 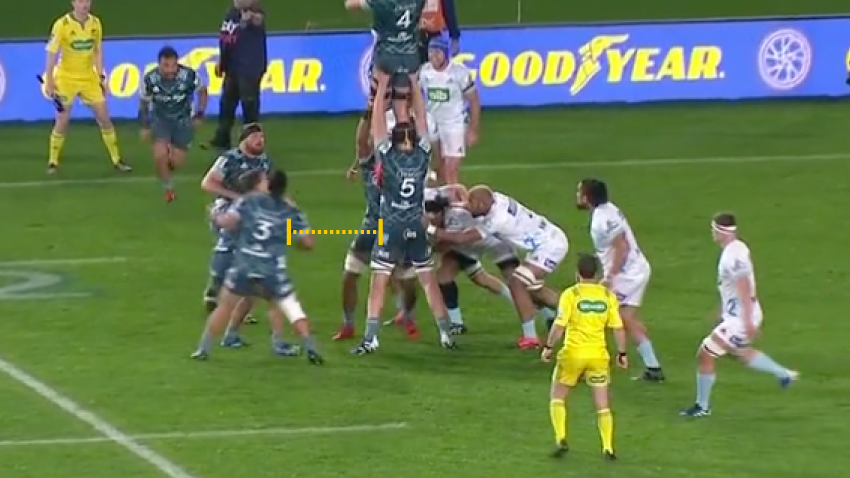 When the two packs come together, we can see this advantage play out. Look at the body shape on Tuipolotu and Tuunagafasi after the initial surge – low angle of entry, legs extended with a wide base and they’ve stood up the lifters, taking them out of the drive. 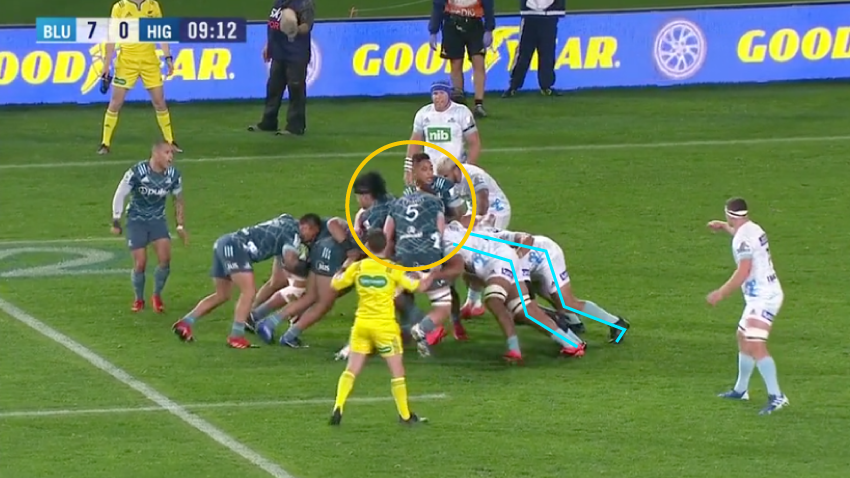 Navy #5 is put into a negative pushing position almost immediately and the two Highlander lifters are actively stalling their own pack’s forward momentum. Paripari Parkinson is leaning into the shove as the receiver but he isn’t isolating any of the Blues defenders. The Highlanders have no momentum and the Blues have actively stuffed this maul.

You can see the decisive action that won the contest here before Tuungafasi entered the shove;

Look at low body angle of the counter-maul. Look at how three initial counter-maulers were able to drive back six Highlanders in the early going. The Highlanders were never able to recover from that decisive early action and the maul gained no effective ground. The Otago franchise scored a try a few minutes later off this possession but that was in spite of their lost maul, not because of it.

When we look at another example from later in the half, we see what happens when the Blues can’t get those pre-binds in place.

When your lineout is your maul, you commit to an action.

In this instance, the Blues put up two jump pods to pressure the Highlander’s throw on the 10m line.

This is an expression of a possible Blues decision to attack any opposition lineout between the 10m lines with multiple jump pods but the drawbacks are clear to see in this instance when the Highlanders go to the catch and drive.

Without a set counter-maul in place, the Highlanders beat the Blues to the build and make good initial headway. 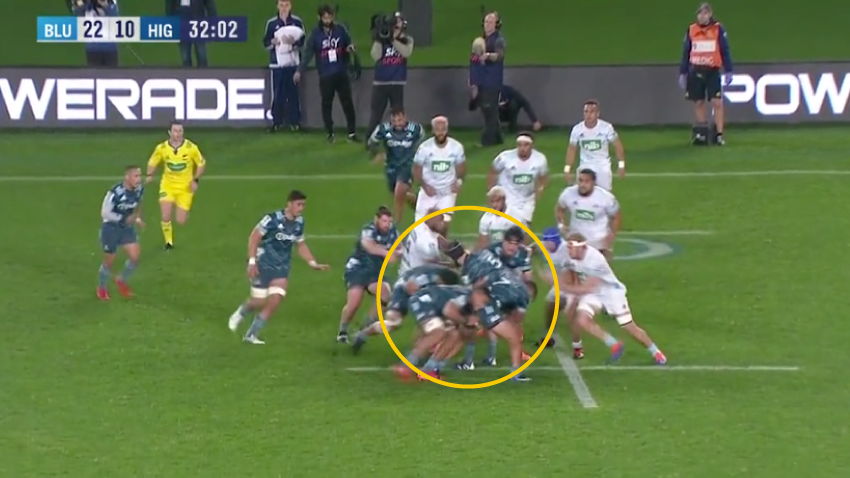 The Blues do manage to slow the Highlanders momentum with some side-scragging action as the maul progresses down the field and that gives James Parsons, the Blues’ hooker, an opportunity to land a killer shot on the front of the maul. 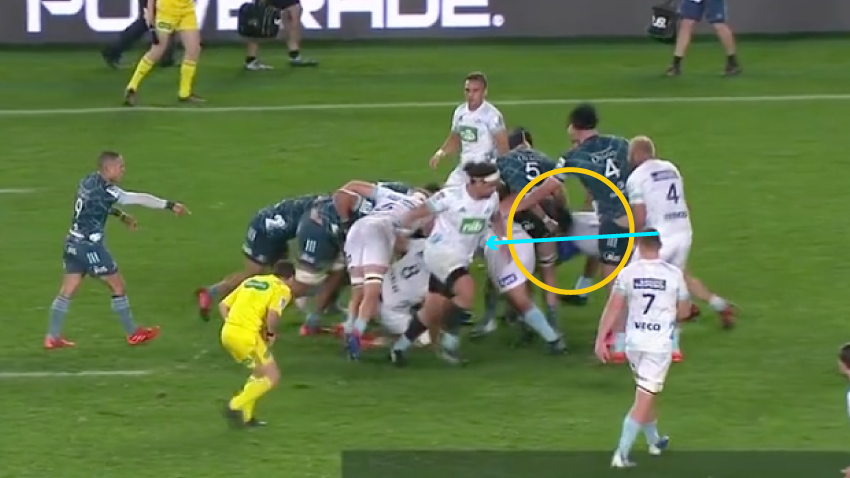 Parsons caught Navy #5, Josh Dickson, with a strike that stood him up, actively stopped the front of the Highlanders’ maul and allowed Tuipolotu to come in and finish the job. Here’s the action in slow motion.

Parsons makes the killer shot and Tuipolotu enters next, binding underneath Dickson’s centre of gravity with his arm locking out around Navy #5 legs.

The same principle of losing the initial momentum could be seen in this maul before halftime. The Blues went into the air – the throw was located between the 10m lines – and the Highlanders beat them to the build for another 10m gain that ended with a penalty after the Blues brought down the maul illegally.

The Blues angle of entry as this develops are quite good but all the forward momentum is with the Highlanders so the strength of the Blues entry doesn’t have a material effect on the forward progression of the maul.

What does this show us? That the Blues were halfway between staying on the floor and contesting the jump through White #5 – look at the half-hearted launch – and they lost valuable time defending the maul in their confusion.

With the game on the line in the last three minutes, they would not show this same confusion.

Most elite teams would back themselves to finish off a maul opportunity from close range but when you commit to the catch and drive, you accept that there are certain limitations to what you can do. Most teams aren’t going to challenge in the air on these 5m defensive sets. Munster did so successfully against Exeter two seasons ago (with two counter launches) but that kind of action would be relatively rare.

Even in this instance, you can see the limitations that the Chiefs have had to accept. If you’re going to drive from the 5m line, the safest and most productive place to do that is at the tail of the lineout. The Highlanders made the same decision in the dying minutes of their game against the Blues.

Everything is coalescing to the tail of the lineout on this scheme as the ball comes out of the hooker’s hands. The Blues will have expected that a throw to the tail was a likely target and they’ve deployed three heavy defenders in the immediate vicinity with a receiver in the second layer to guard against a maul feint. 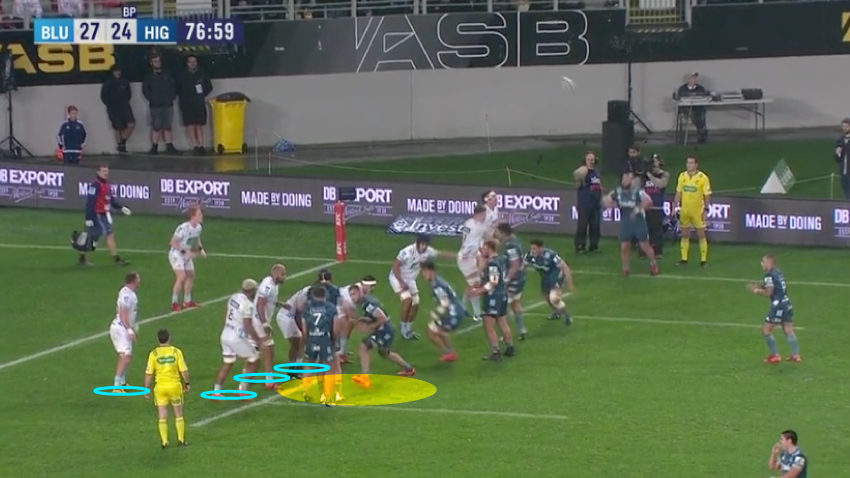 The Blues immediately look for a pre-bind to get guidance from the Highlander lifters. Right before the ball comes in, Hoskins Sotutu has a grip on Navy #7. The drive unit of the Highlanders’ maul is still a few steps out and Sotutu is already building a strong advantage on this critical maul. 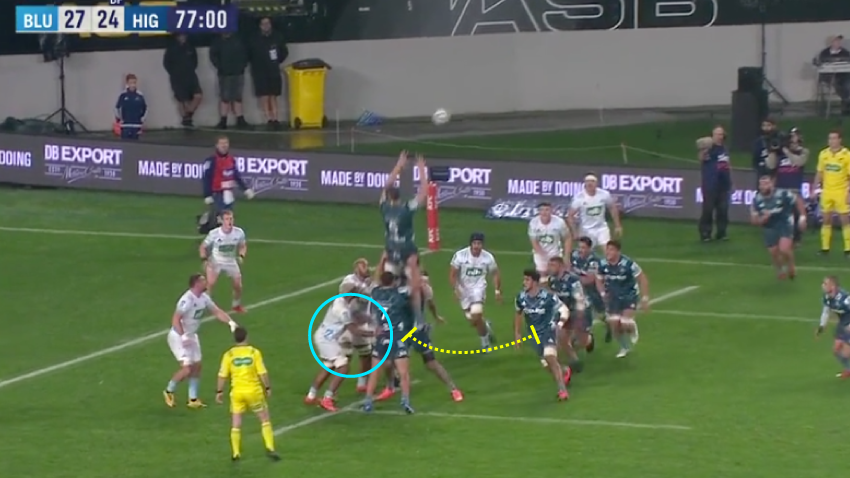 As the ball comes down, Sotutu and the rest of the Blues’ heavy defence feels Hunt shift his weight and that starts the counter-drive before the jumper hits the deck. For a half a second, the Highlanders’ lift is isolated from the drive unit, and that’s all the time that the Blues need. 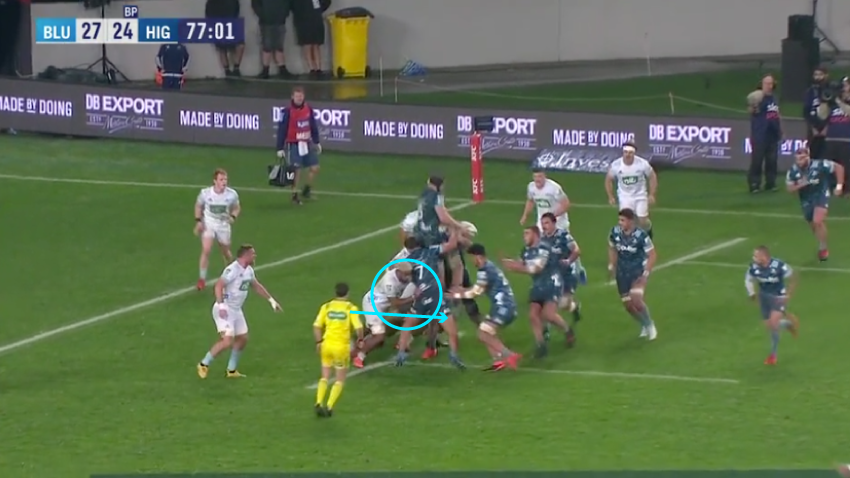 Hunt is already in a negative shape on the infield side. This stands up the front of the Highlander’s maul – killing their momentum – but not only that, Hunt so decisively loses the contest that Sotutu is able to get hands on the Highlander’s ball transfer and hijack it. 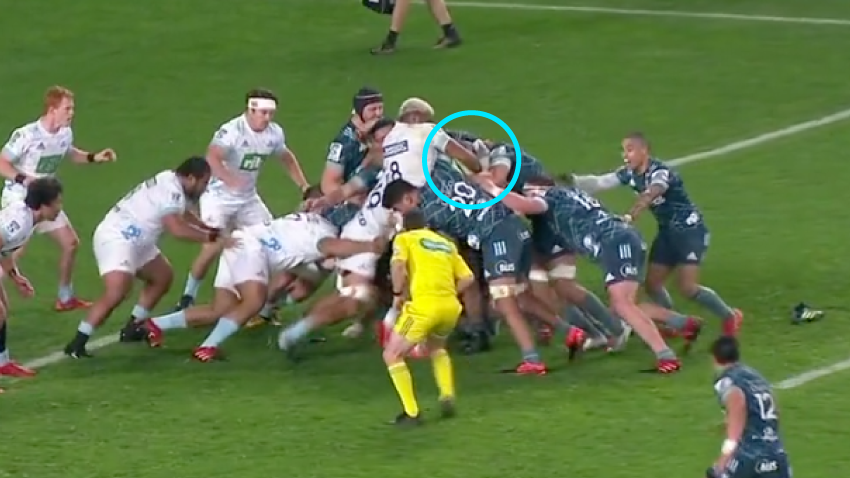 Sotutu has the power to keep hands on the ball as the Highlanders rotate around and soon, all forward momentum has been lost. The Blues turn the maul over and all but secure the win.

This wasn’t even a perfect defensive set from the Blues – the front of their lineout over chased the lineout and missed the initial contest but the quality of the initial pre-bind and counter shove did enough damage that the Blues were able to recover collectively.

Pre-binding, timing and clarity of thought on your defensive schemes are a key part in deciding the outcome of defensive maul situations.