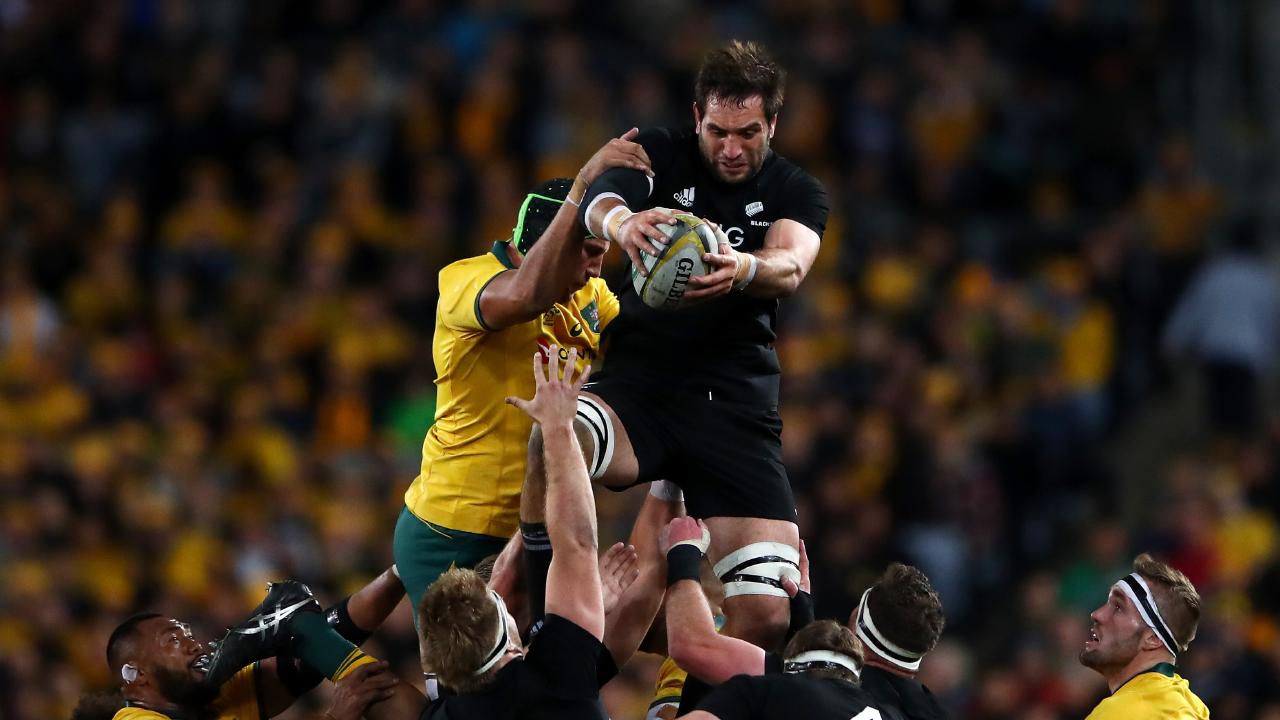 If you want to be in with a shot of beating the All Blacks with 10 minutes left on the clock, you’ve got to have your basics in order.

That means your scrum, your kicking, your exits and – most importantly – your lineout all have to be in near perfect working order. If any of these are subpar, the All Blacks will crack you eventually, whether it takes ten minutes, twenty minutes or fifty. On Saturday morning the Wallabies appeared to be putting it right up to the All Blacks for the first half an hour but the seeds of their downfall were happening in front of our eyes, even as they took a 6-0 lead. Their lineout was badly malfunctioning and that was critically undermining their hard earned possession and territory.

Let’s have a look at some of the details.

First things first, I covered a lot of the issues with the Australian lineout in my Green Eye article prior to the first summer test. Ireland, in my opinion, didn’t take full advantage of Australia’s issues with selection and scheme design when it came to the lineout. The All Blacks certainly did, in my opinion.

To really squeeze the All Blacks, you have to build pressure on their relatively conservative exits by continually punishing them on your throw. Australia got a lot of workable lineout ball (off penalty advantage and exits) but couldn’t use it to slowly crank the pressure on the All Black lineout and midfield lineout defence.

The stats are ugly –  the Wallabies had 11 lineouts but only successfully completed three of them (ESPN has them listed as 13 lineouts with 5 won, but I only found 11 on two run-throughs).

A 27% return from your lineout against the All Blacks usually translates to the scoreboard in a way you won’t like at fulltime. If you can’t win your own lineout ball against the All Blacks, you spend a lot of time defending them on transition. This is exhausting and it’s this relentlessness that breaks teams eventually. Ideally, you’ll want to keep them bound into mauls and defending your strike plays to the point that you overload their defence and pen them in their own half. Pressure begets pressure, and there’s no better way to exert that pressure than through the intelligent use of the lineout.

When Ireland beat the All Blacks in Chicago our lineout ran at 80% completion and, while it doesn’t always predict a win against the #1 side in the world, it is usually a hallmark of games where they lose.

To put it plainly, Australia winning Bledisloe 1 running at 27% off the lineout would be verging on the miraculous, regardless of how well you start. But why was their conversion so low? Let’s have a look.

To understand where Australia went wrong at the lineout, we have to look at the systemic selection issues that undermine their lineout – the selection of David Pocock and Michael Hooper. Selecting these two players in their back row is completely understandable in that they’re world class operators around the field and hugely influential leaders but their selection limits the ability of the Wallabies to vary their lineout targets.

That isn’t to say that Hooper or Pocock don’t jump in the lineout – Hooper jumps in attack and defence on occasision – but it does mean that, for the most part, Australia will be limited to two primary jumpers, one secondary and two decoy/feint options. Everything that Australia do in the lineout is a gimmick designed to hide this limitation. Add in some throwing issues – that both of their current hookers have – and you can see where that 27% came from against a side as sophisticated in lineout defence as the All Blacks.

Here’s their first throw of the game. Spot the issues;

This is a fairly straightforward target – throw to Rodda at the front lifted by Tui and Hooper. The timing of the lift and throw is all off. Polota-Nau seems to go early in his throw and Rodda’s jump is so off time that Retallick actually beats him into the air. Rodda’s a good jumper but he doesn’t look it here because of the quality of his own timing and that of his lifting pod. 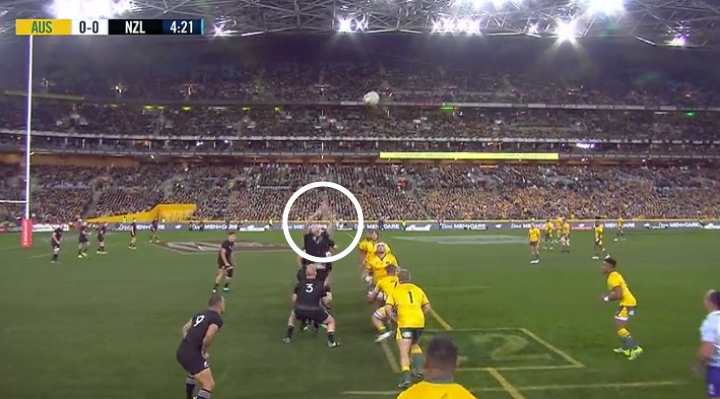 If he jumps, you’d back any lock to beat him to the ball and/or crush him on landing for a maul setup because Australia tend not to play off the top when they throw to the front. If he’s a lifter, you can get after him at the front of the maul which puts the Wallaby build under pressure.

That gives you the licence to challenge at the front whenever Hooper is standing there and the All Blacks certainly did that here to good effect.

When the Wallabies are under pressure with 6+ lineouts, they revert to smaller numbers to ease the tracking pressure of the opposition and make the throw more of a race into the air. In this lineout scheme, three of the four men standing are jumpers;

That takes away a lot of the artifice of the scheme in favour of a straight physical contest. Rodda is an athletic jumper, so this is generally a good tactic for the Wallabies if they’re under pressure but the quality of the throw is a constant issue for them – as is the quality of their footwork.

Here’s another four-man lineout with a three jumper structure;

Do you see it?

Rodda’s slide around Coleman doesn’t sell the feint, it just tells Retallick where the jump will be.

Watch Retallick focus on Robertson as soon as he sees Rodda’s slide;

Retallick’s wingspan is such that he doesn’t need a full two person lift to interfere on these kinds of throws.

The usual five-man plus lineup you see at the front – Robertson, Hooper, Rodda and Tui – is a fairly common walk up tactic used by the Wallabies, and they use a few different variations off of it. 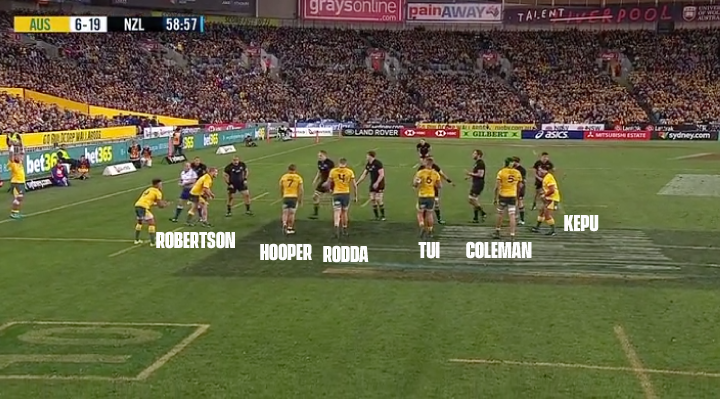 They have Rodda at the front lifted by Hooper and Tui, Tui lifted in the middle or tail by Rodda, Coleman or Robertson, Coleman lifted by Kepu, Tui or Robertson on the run, and Hooper at the front as an alternate. We can see how that last one turned out.

Hooper vs Retallick is going to end with a clean steal more often than it doesn’t. That’s just the reality of 178cm going up against 204cm but the main problem is having to use Hooper as that decoy option in the first place.

The Wallabies use their loosehead prop Robertson as a movable lifter, especially on five men lineouts, and that reliance can put a lot of pressure on his shoulders – look at his double feint and 9m dash through the line to lift Tui on the turn at the tail here.

That movement from Roberston shows a lot of effort but look at the positioning of Rodda, Coleman and Tui as they walk into the middle of the line; 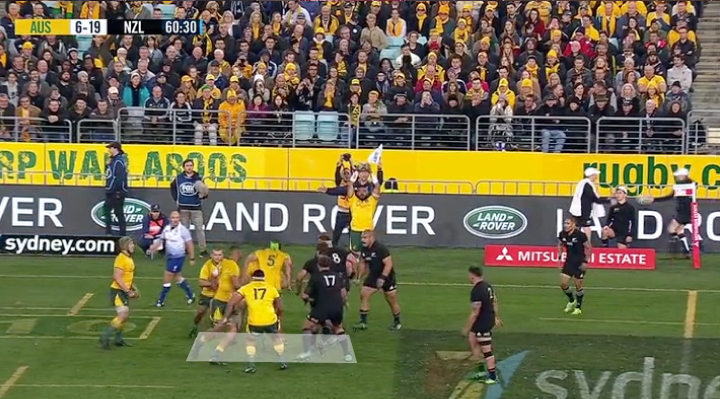 The All Blacks know that, whatever happens, all three Wallaby jumpers are in a 3m space at the back of the lineout so they don’t need to mark a jumper, they just need to mark space. When you have got a guy like Sam Whitelock patrolling that space, he doesn’t need an exact spot to counterattack in the air.

Here’s another, even more extreme example on a five-man lineout, again with the three primary jumpers walking into the line late;

Robertson feints three times at each of the primary jumpers – Rodda, Tui and then finally to Coleman – but the throw beats him to the lift and the All Blacks steal possession.

Do you drop one of Pocock and Hooper to bring in a fourth legitimate jumper? Or do you muddle through with the undoubted quality they bring elsewhere and hope it’s enough? The All Blacks now know that the Australian’s have three key lineout patterns now – the front five multi-option with Roberston as a runner, the reduced four-man, three-jumper option and their straight throw to the tail to Coleman’s three-man pod. Would the addition of a fourth jumper give them more attacking options? Certainly. Would it be worth losing what Pocock and Hooper give you on the floor? Possibly. I’m slowly coming around to the idea that you can have Pocock, you can have Hooper, but maybe you can’t have both at test level in 2018.

Either way, if the Wallabies run 27% this weekend, expect the scoreline to be the same.