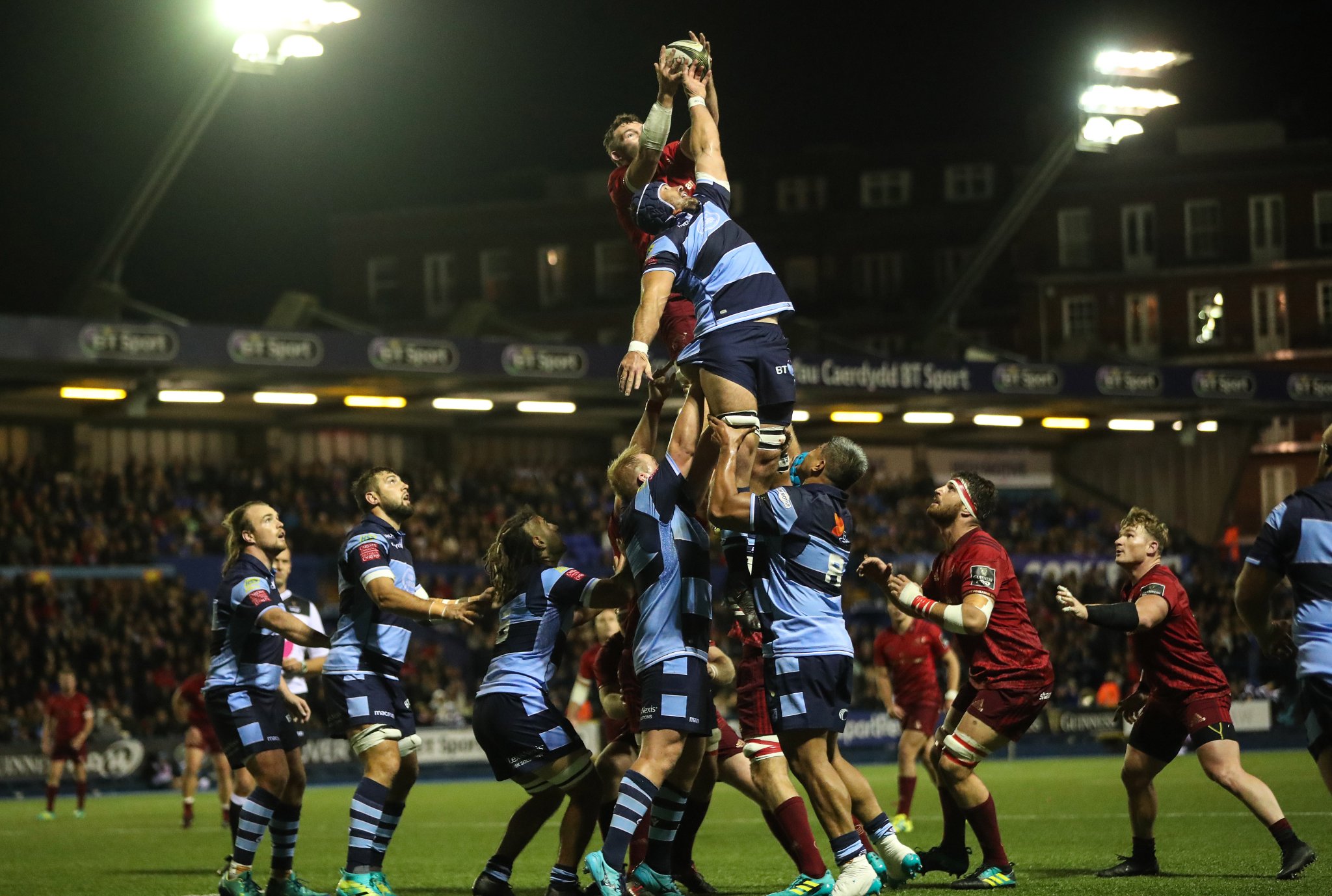 The Angle In The Tight

It doesn’t take much for a setpiece to lean away from dominance – or even just stability – into instability or worse, weakness.

To some, that will immediately sound like a fudge for Munster’s dramatic underperformance against Cardiff on Friday, especially when we mostly had a full strength pack lining up. I can’t help if you think that but I will add – as I did on Friday – that no Munster pack without Niall Scannell or Rhys Marshall can truly be considered full-strength.

Let’s be frank here – Munster’s setpiece just wasn’t good enough here, individually or collectively. In this article, I intend to have a look at some of the details that I felt contributed to the loss as it pertains to the setpiece.

First, I’ll have a look at the scrum.

Now, in the last few weeks, I’ve focused a little bit on the manner in which some sides are attacking our scrummage. You might remember this one from Glasgow.

The main characteristics of this are;

On Friday, Cardiff were going for the same tactic and found a similar reward. Have a look at this scrum from the first half as an example, and watch for the similar finishing shape of Cardiff compared to Glasgow.

They are almost identical from week to week. Cardiff, like Glasgow, are going after the connection between Archer and Sherry – it was Ryan and Sherry in Scotstoun – and the using their momentum from the side to walk around the corner, get forward momentum and win the penalty.

You can see the target area quite starkly when the scrum breaks; 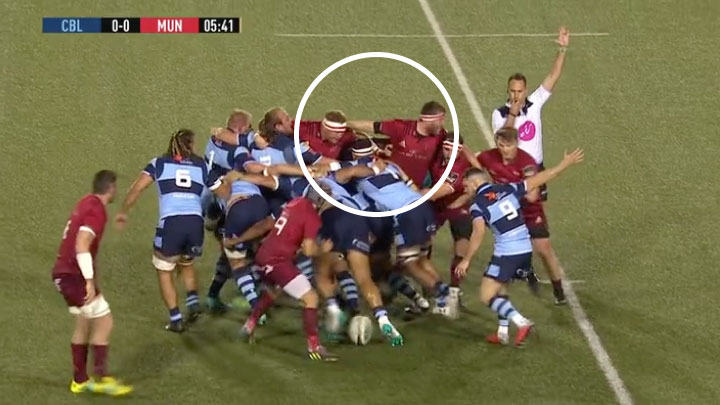 Look at the key action here;

Gill bores in and up while Dacey does the same on Sherry.

Once Archer and Sherry are up, Cardiff can walk around the corner, generate forward momentum and, as a result, earn a penalty from Immelman.

Munster tried to do the same later in the game but the penalty went the other way.

You might say that was down to Kilcoyne choosing to angle in when Immelman was on the loosehead side, but it didn’t really matter here, where you can see Gill’s up and in action on Archer/Sherry again.

Personally, I think the twist in Kilcoyne’s body shape was dramatic enough to sell the bore to Immelman in this instance but this will probably be a bone of contention for Munster on the video review. 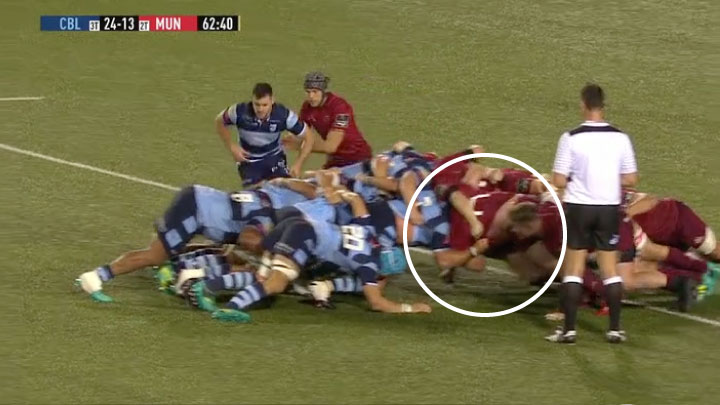 If Kilcoyne sold this with body angle rather than a torso twist and a step out, I think it probably flies.

The main problem though, in my opinion, came from the pressure coming through on Sherry through Archer on the tighthead side. 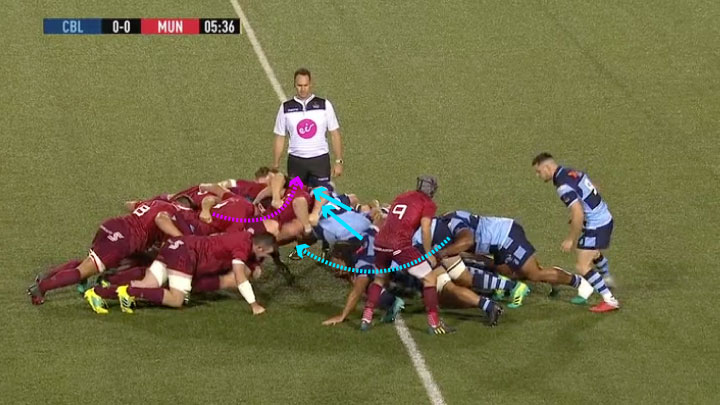 By Gill angling up and in, Dacey was able to break Sherry’s bind on Archer and start Cardiff’s walk around the corner. Stronger work from Sherry on his bind and body position on Dacey’s initial strike might have stemmed the damage here but on this kind of angle from Gill, both Archer and Sherry were under massive pressure.

That isn’t to say that Munster scrummaged poorly for the entire game by any means. When Munster could dictate the angle of engagement and force a straight scrummage, they could overpower the Blues. Here’s a good example;

Munster angled the Blues after the put-in, “set” the drive, and then powered through the middle with Sherry, Cronin and Archer beating their man. By angling around the scrum after the drive, we forced the Blues second row out of alignment and took the power away from their front row.

We did this a few times, winning two penalties directly from it.

Twist, set the drive, move their second row out of position, drive through for a penalty.

Our work once we got those penalties left a lot to be desired, though.

The majority of our lineout work in the first half was built on this seven-man, four-jumper structure. 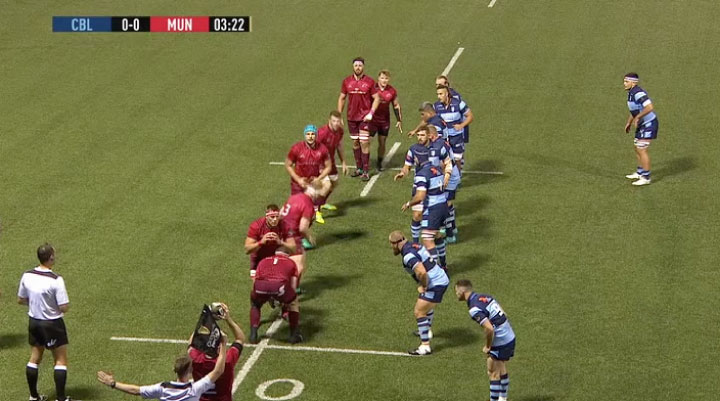 It might not look it, but this is a multi-option, incredibly versatile structure that gives Munster multiple passing and mauling options all through the line. You’ll notice that Cronin and Archer are at the front of the lineout in this structure, a little different from the “prop at either end” layout you’d usually see. 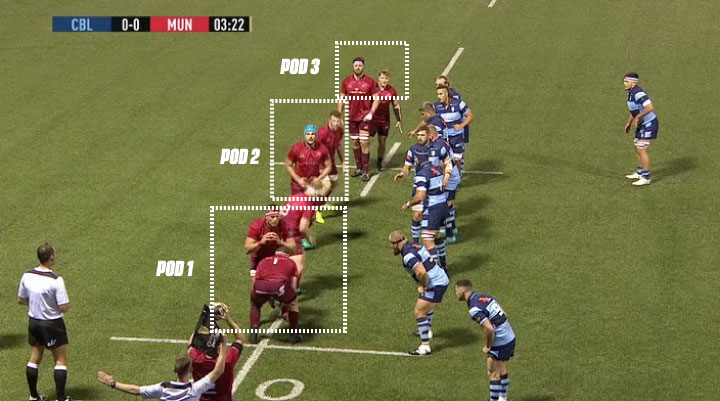 Pod 1: Here, Stander can jump at the front for maul position or some drop down passing with a forward on a loop as lifted by Cronin and Archer on the turn. What this mainly does though is elongate the Cardiff line. You can see Stander’s animation and Archer’s position selling the live possibility of a ball to the front at all times. That keeps Arhip at the front of the line and narrows the counter jump options. Cronin can easily move through the line once Stander steps away.

Pod 2: Beirne and O’Mahony are our most mobile and athletic jumpers so they have the run between front and middle. With Archer/Cronin and Kleyn all capable of stepping in for a lift as well as both men being capable of lifting and bracing the other, Munster have the ability to outmanoeuvre any counter jump pod. With Archer at the front, this gives Munster a lot of mauling capability in the middle of the line especially.

Pod 3: Kleyn and Cloete are the tail pod and can be targeted directly with a throw to Kleyn or O’Mahony on the step back. Cloete is also right at the tail to shorten the space between the midfield hit up and the clean.

Let’s have a look at the first one.

This runs perfectly. Sherry gets a nicely timed throw and Munster get clean possession with Cronin stepping through Stander and lifting Beirne with O’Mahony. The key guy in beating the counter jump here is Archer.

His decoy lift sells Blue #4 on the position which gives Beirne a clean take and allowed Cronin to perfectly step into the lift. Archer is also in a good mauling position off the back of this too, even though we don’t use that option – see how he can snag in right alongside O’Mahony on this lift? We’ll see that later. Later in the half, we used the same structure and call to, once again, get clean ball.

Cardiff were actively trying to interfere with our lifters on both of these lineouts – a tactic of theirs all through the game – but it’s a bit much to expect a PRO14 assistant referee to spot that.

Again, look at Archer’s step out and maul framing.

A few minutes later, we had a great lineout position and used the same set up again. This time, the aim was – I think – to go to Stander at the front, but the throw just wasn’t good enough.

I think we were trying a drop-down pass to O’Mahony on the loop around here with Sherry as a possible pass option once O’Mahony broke the line.

You can see the slight hitch in Sherry’s throwing motion right before the launch and that hesitation can screw with your trajectory in your power hand that drives the ball forward. That has happened to Sherry a fair bit over the last few weeks and in this game. This one came out of his hand wrong late in the game and killed the speed of the ball, allowing Cardiff to compete.

When the ball is wobbling, it’s going slow.

Anyway, we had another opportunity a few minutes later in the first half and, once again, we used the same formation except this time, we went to the maul.

Stander steps away, Cronin steps through and Archer steps around to the side for a maul build. Our maul is pretty flat, all told. We’ve got the front layer of O’Mahony, Beirne and Cronin, with Archer, Stander and Kleyn in the second layer. Sherry takes the ball at the back and after Munster absorb the initial counter hit, they’re in a good position to go.

You can see the build doesn’t have a lot of moving parts to it but I think we’ll be disappointed with the speed of our setup here. Immelman goes a little quick with his “one-stop” in my opinion but that wasn’t the key part of this maul – it was Nick Williams swim up the side that Immelman didn’t penalise.

If the referee wanted him out of that position then his heavy pull separated from the rest of the Cardiff defence was worthy of further sanction given the effect it had on stalling Munster’s imminent drill through. 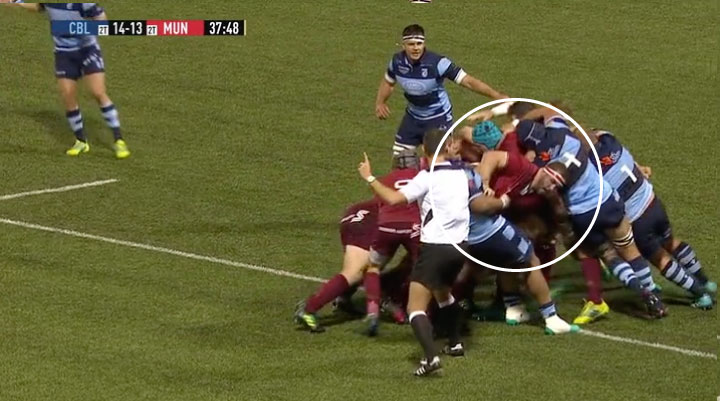 With Cronin unhindered, I think Munster get the pressure they need on Blue #4 and Blue #1 to pop through on this shove but the way the lineout formation was set up gave us these multiple options.

Munster were using the exact same formation to set Cardiff up for the forgotten arm – the punch you don’t see coming. Like boxing, a lineout scheme can sometimes include building a pattern for the opposition to follow and then breaking that pattern. Like using a jab-jab-lead hook-uppercut routine and then switching it up when the opponent thinks that they’ve cracked it.

We do seem to be using different calls and alignments so far this season, which explains some of the inaccuracies I’ve seen so far – blown lifts, jumbled alignments, iffy throws – but the live training ends here.

In the second half, we set up again with a 3-3-1-1 maul formation based on a tweaked version of this lineout build. Kilcoyne and Sherry made the tail (1-1) while Beirne, O’Mahony, Stander (3) made the first layer and Kleyn, Cloete and Archer (3) the second.

Blue #4 lying on the maul after the jump gave Cardiff a little headstart in their maul defence here but when the player came through over the top onto Kilcoyne and then Sherry, the good build we’d made was done.

That happened from a mistake at the front of the maul. Stander was looking to pry Navidi’s arm off the top of the maul and, in doing so, made a space for another Cardiff counter-mauler to come through the middle.

You can see it here.

Personally, I think let Navidi get his hands there. He’s practically standing up as it is and wouldn’t have the length to get on our ball carrier. If he wants to take himself out of the counter-shove, let him.

The trade-off with a short maul like this is by getting a lot of power over a wide area, you leave yourself open to getting scragged over the top. Our wide set up – with Beirne and Archer providing a wing barrier – was probably to combat Cardiff and other sides tendency to slide up the side of longer mauls and using every second of referee leniency they can steal to disrupt possession.

You can see Beirne and Archer guarding the side here; 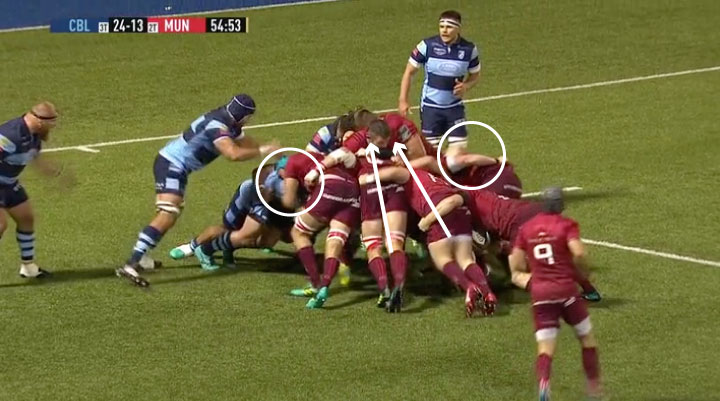 That leaves Kleyn, Cloete, O’Mahony and Stander to set the drive pressure up the middle. The logic here is that if Cardiff are spending push resources going up the side, we’ll go through the middle to where your numbers are weaker.

A little more security at the front and we might have been confident keeping this in rather than breaking away early.

This formation was quite useful in the looks it gave us but we’ll need better execution against Ulster, to put it mildly. Stronger refereeing will help – we’re at home so that usually helps in the PRO14 – but we’ll need to convert our lineout possession and maul builds into something more substantial than we saw here.

We’re close, but close doesn’t get you the cigar.