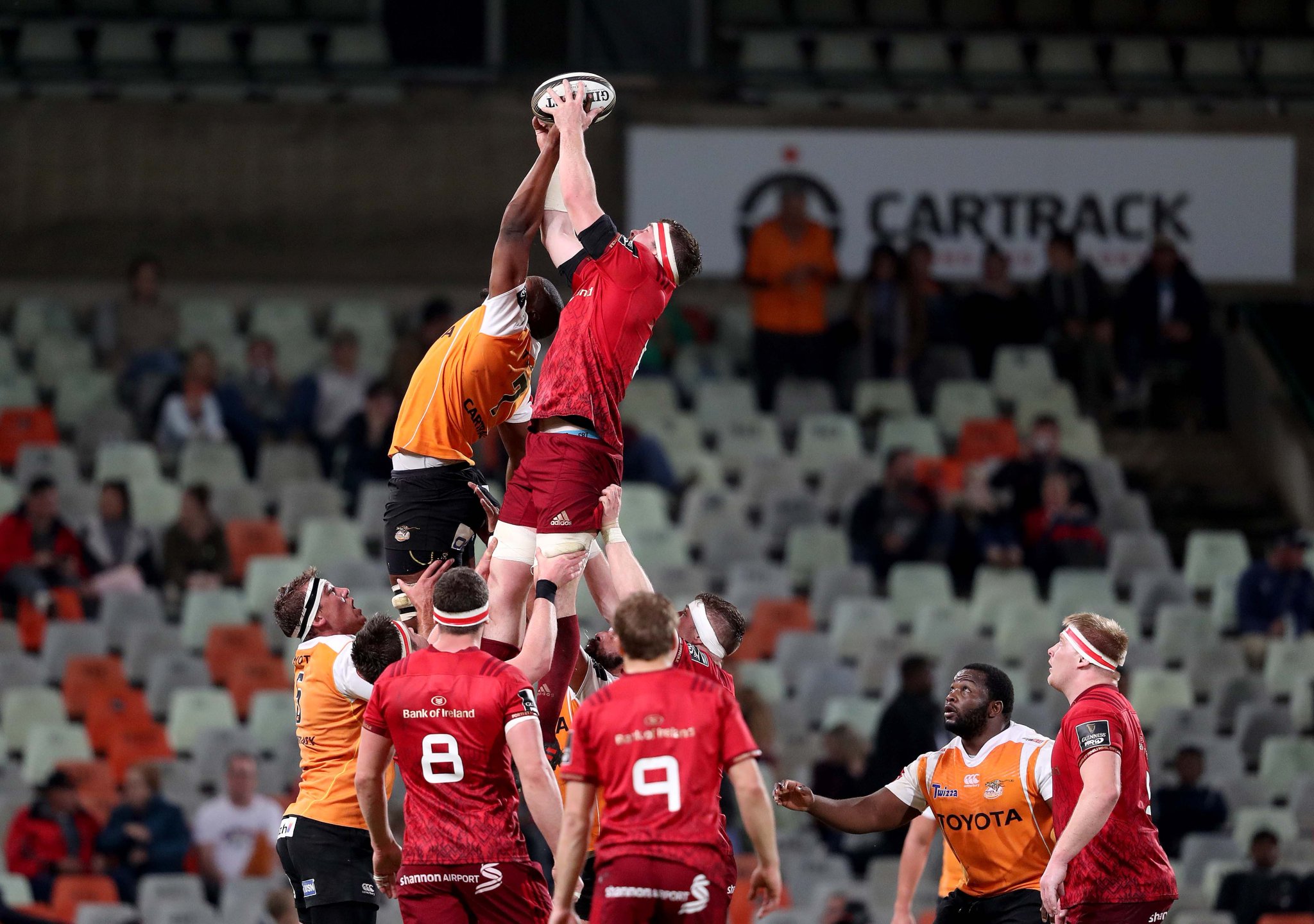 The 3 Man Pod and the Shadow Game

Munster’s lineout work this season has been consistently inventive, intricate and imaginative.

From Billy Holland’s lifter bump runs, to Conor Murray jumping at 2, Munster have consistently challenged the opposition’s video analysts with unique structures and movement when it comes to constructing maul plays and wider running plays.

One play caught people’s eye at the weekend – Munster’s 3 man lineout – and I had a few requests to break down why Munster would use such a move. What are the benefits? What is the thinking behind its construction? We’ll have a look at that.

First, though, if you’ll listen to today’s press conference you’ll have heard Johann Van Graan referring to “trying some things” during last weekend’s game with this weekend’s game in mind. I think this 3-man lineout is one of those things.

When you have a unique play like this, you wheel it out in the full knowledge that it’ll be pored over by the opposition analysts ahead of your upcoming game – in this case, that is obviously Racing 92. Remember, we have played them four times in the last two seasons and any kind of new information will be pored over extensively. Munster know that Racing will have seen this play, and have realised its potential to cause massive damage but letting them see it in advance is all part of the plan.

Let’s have a look at it piece by piece.

It’s the construction of the lineout itself that most people noticed, and for good reason – you just don’t see this kind of alignment all that often. Munster started this lineout in the middle, with O’Mahony standing in the middle of a jump pod containing Grobler and Holland. 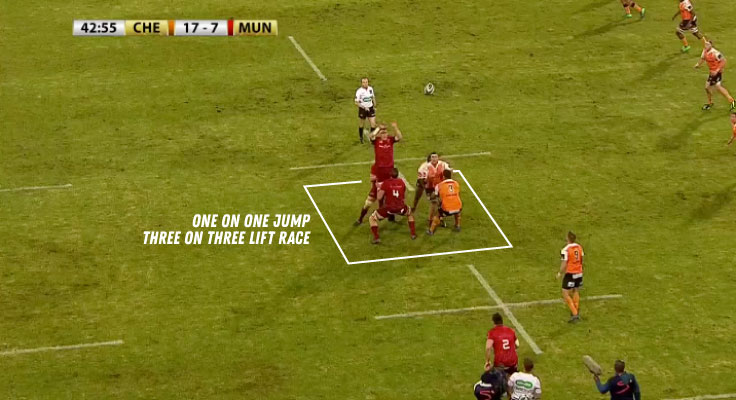 Straight away, this is a situation where the opposition will be sensing something unusual. There’s no halfback as Murray is standing at a position closer to the first receiver position than what would be considered normal.

What Munster are doing in this section is forcing the Cheetahs to contest. When they’re lining up before the throw, the Cheetahs’ lift pod will have a few different things to look at but the first worry is that Munster are going to set up a 4-3 maul with Scannell locking in behind O’Mahony on the landing. That’s why the Cheetahs kept a prop and a lock just out of shot. Munster could easily run 10/15m with a good enough set, especially with the Cheetahs likely to contest in the air.

Grobler and O’Mahony sell this possibly on landing by snapping down into a supporting position and O’Mahony leans backwards into the Cheetahs. 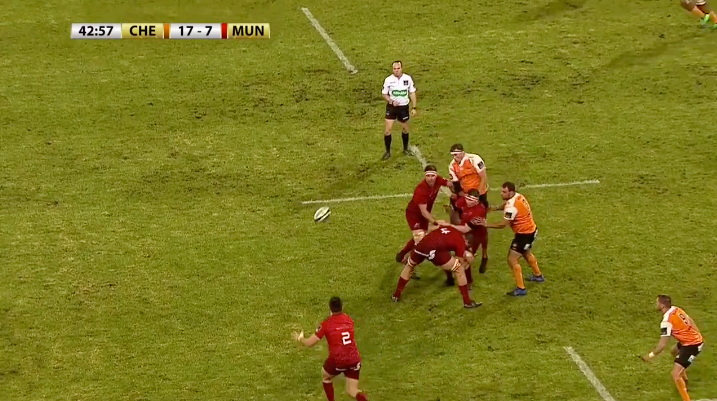 This is a double layer feint. The first is for the Cheetahs – and in this instance, O’Mahony is mainly looking to keep the jumper and the lifter occupied for a heartbeat or two. The second layer is for Racing 92, who now know that if Munster set up like this on Sunday, we have a maul option off the bat because this is exactly how it would look except with Kleyn – an extremely powerful mauler – in Grobler’s position. Scannell’s line would be the exact same in this instance and, with good momentum, a 4-3 maul could get great ground initially and increase the likelihood of an “in from the side” penalty from the covering forwards.

But we don’t maul – O’Mahony takes the ball at the peak of his jump and flicks it to Scannell. This action shouldn’t go unremarked on because it’s incredibly skilful. Look at it at full speed;

To take this at the peak, shift the ball into his right hand and pop this perfectly into Scannell’s arms without the hooker having to break stride shows outstanding dexterity, athleticism and skill to do at this kind of pace.

From there, we enter the second part of the scheme. Here’s how it looks after Scannell’s (excellent) pass. 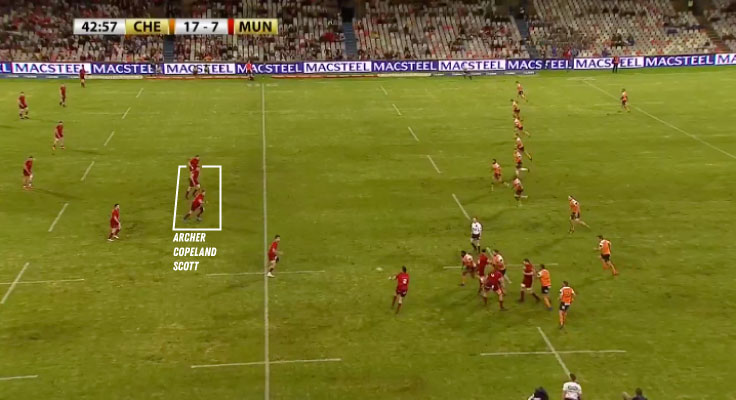 The first thing you notice is that three of the four extra Munster forwards are lined up in a heavy screen in front of Hanrahan. Stander will be standing in the middle of this trio on Sunday, should we line up in a similar way and, again, the Racing will have to consider the possibilities here – what if Stander, flanked by Kilcoyne/Cronin or Ryan/Archer, trucks this ball straight into the 10 channel? The #10 won’t be there, but that doesn’t matter;

A carry of sufficient power would narrow the defending forwards into the white box and, with a clean recycle, Munster would have numbers to attack with running onto the ball and with Hanrahan/Keatley waiting to stitch it all together.

But we don’t use this option – it’s a screen. As far as Racing’s video guys are concerned, this is another layer to this scheme. They have a lot of options to defend once Murray gets his hands on the ball.

You have the heavy trio of forward carriers in the first layer, Hanrahan in the second layer with Arnold and Goggin to bridge the play to a wide pod of four attackers, who are all clustering in the 15m channel on the other side of the pitch.

Murray can hit the forward trio for a pincer carry (where we trap all the forwards on one side of the pitch) or he can throw the ball back to the flyhalf to prober the ball wide with the screen un-sighting the midfield defenders for a few heartbeats. 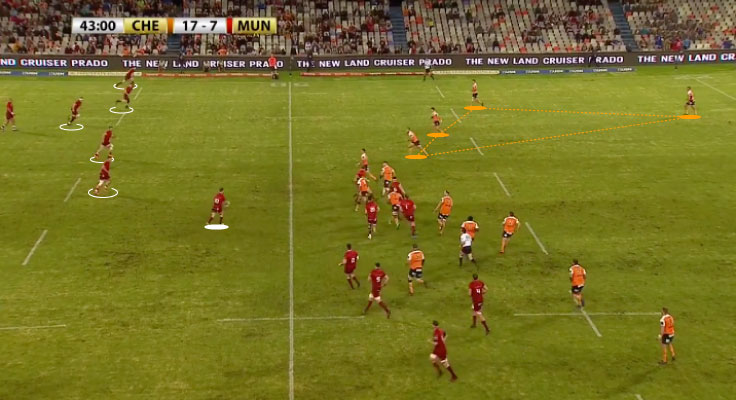 Once the ball goes back to Hanrahan, we’re into the final part of this scheme. He’s got three options on receiving the pass – hit Goggin for a go against the grain of the Cheetahs blitz, hit Arnold with a wider pass that could possibly generate a 4-3 (4-2 at best), or a kick option.

All of these options have been given the best possible opportunity for success due to the work leading up the ball heading into this hands and Racing – just like the Cheetahs – have to consider all the options here.

What Racing wouldn’t want here is the ball coming to Arnold right on the seam of the forwards blitz line because that would open up the possibility of Zebo, Conway, Sweetnam/Earls/Wootton, O’Donoghue surging onto the ball at pace and with multiple finishing and supporting options. 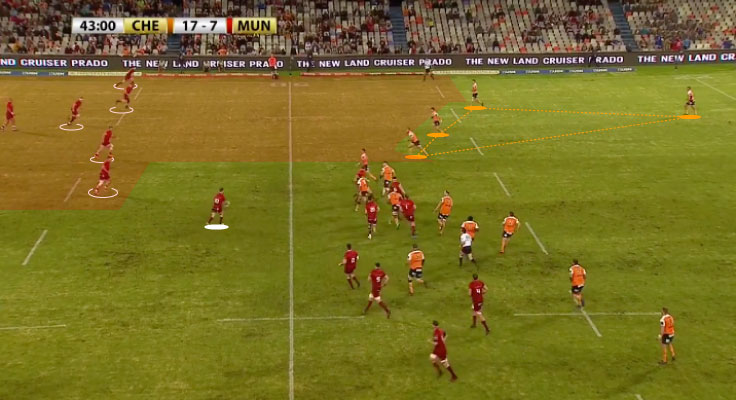 If you watch Munster warmup, you’ll see them running trios down the 15m channel – weaving the ball between three runners with a defender in the way. This play has that as a potential option.

What did Munster do? We kicked this one. 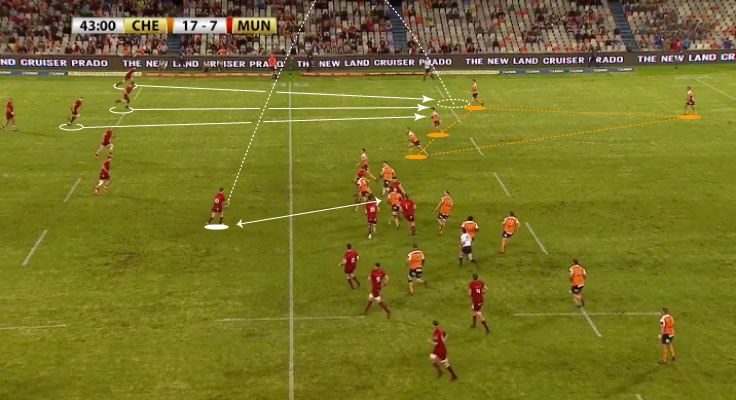 The screen provides Hanrahan with a perfect pocket to kick from, and he has three runners ready to go in the target area. It didn’t quite work out as planned in this instance…

… but that’s not really the point. Had we retained the ball here, we had a tonne of heavy options waiting on the next phase but it didn’t work out.

The chance to go wide was there in this instance, so why didn’t we go for it when we were 10 points down?

Because the kick was the lowest value option off this scheme. Why show how the wider option would work – or even the tendency to do it – when Racing are watching?

If their video analysts are poor, and I have no reason to think they are, then they’ll see this as a two-part play where Munster will look to kick the ball to one of their wingers who they’ll know are vulnerable under the high ball, or set up a sneaky maul that could possibly buy a cheap three-pointer.

If they’re good – and I think they are – then they’ll realise that this simple play with one high-risk component (the jump and pass to the hooker) opens up five potential options that could hurt them at every point if Munster are accurate. In the white-hot heat of a European Champions Cup, that plethora of options can affect the defensive capability of even the best players and in what is probably going to be a tight game, that grain of rice can tip the scales your way.

What one do I think Munster will use if they try this on Sunday? I genuinely have no idea and you know what?