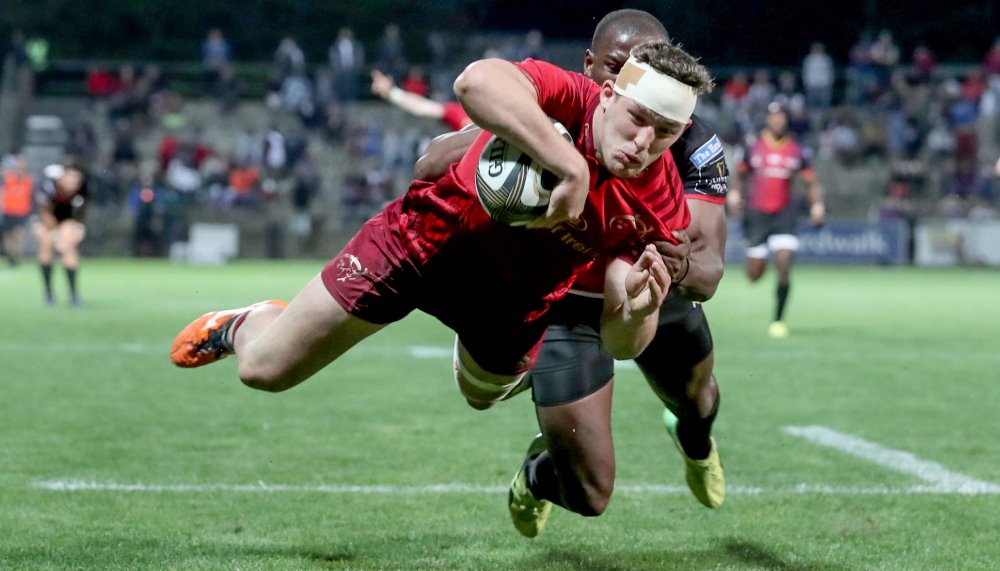 There’s a danger in taking too much from Munster’s 39-22 win in George against the Kings on Saturday night.

The Kings were game, sure, but a lot of the weaknesses we expected them to show in this game showed up pretty much as expected. That doesn’t mean that there wasn’t some nice stuff to look at though, and some of it was a really good example of how Munster’s attacking work is taking shape as we head into the pointy end of the season in both Europe and the PRO14.

A lot of that work is based on some intriguing starter plays off of set piece and the way we go about building multiphase options on big openside attacks.

I’m going to have a look at the loose phase attacks in tomorrow’s article but I’m going to look at our growing work behind the set-piece in this one.

The set piece offers an attack coach the perfect environment to construct plays and attacking schemes. It is often on the effectiveness of these schemes that a backs coach gets judged, such is the importance of the scrum and lineout in generating try-scoring opportunities in 2018.

Sure, teams should be able to put attacking sequences all over the pitch – and it would be a complete misunderstanding of an attack coaches remit to presume that upskilling isn’t a vital part of their gig – but the opportunity to have a crack off the opposing defence in isolated start positions that can be manipulated with carefully crafted patterns is too good an attacking platform to pass up.

Just look at the Six Nations just gone for an example of the importance of the set-piece as an attacking platform.

The excellent Simon Gleave (@SimonGleave) collated the starting point of all 78 tries in this year’s Championship and the current trends follow those of the last few years.

Tries scored directly in the aftermath of a lineout or scrum accounted for 67% of the total number of tries scored in this year’s Six Nations. Lineouts accounted for 50% of all the tries scored, while attacks platformed off scrums were the next highest at 17%. As an adjunct to this data, we also have to acknowledge that 55% of all tries scored occurred within three phases and 27% occurred within six. What does this tell us? That being able to construct and execute incisive attacking schemes is the best way to score tries at the elite level in the Northern Hemisphere. That doesn’t negate the importance of loose phases – far from it – but it does place a high premium on good attacking set-piece plays off scrum and lineout.

Munster have been working hard on their attacking schemes off the set-piece and for those paying attention, the influence of Felix Jones is really beginning to take shape in our play construction. I’ll look at two instances that stood out to me because of the principles they tried to use, rather than any great success they had.

Look at this scheme early in the first half off a centre-field scrum. 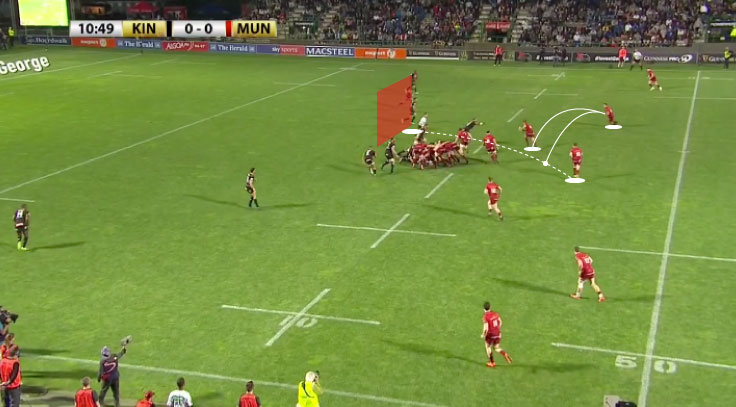 Stander goes quickly off the back of the scrum and pops the ball to Hart, who takes an arcing run away from the scrum before passing the ball to Keatley. Keatley reverses the momentum of the play by passing back inside to Hanrahan, who’s snuck over to the right-hand side of the scrum from his starting position on the left.

This movement was designed to expose the Kings’ openside and draw their midfield blitz beyond the point of the ball so that Munster could generate a clean break for Hanrahan so he, in turn, could get the ball to Oliver and Nash for the finish.

You can see the components here;

Hart’s line takes out the openside, Keatley’s step inside takes out the #8 (with a slight hold from Oliver to make the gap) and suddenly, Hanrahan’s away down the side of the ruck with Stander acting as a “blind” to un-sight the cover defence coming across from the scrum. All the while, the Kings 10/12 and 11 have blitzed on Keatley’s starting position, which leaves a large pocket of defensive space.

This wasn’t the end product of the move, though – it was the setup for the actual finish.

Once Hanrahan got behind the defensive cover, his line always put him in danger of getting scragged by forwards coming off the scrum but this was built into the scheme. Look at Conor Oliver’s positioning off the scrum. He’s not on a hard ruck support line to cover a break, he’s “floating” in the space near the breakup point of the scrum. Oliver is acting as a defensive hindrance to the Kings openside and #8, and as an attacking component once Hanrahan gets through the hole. 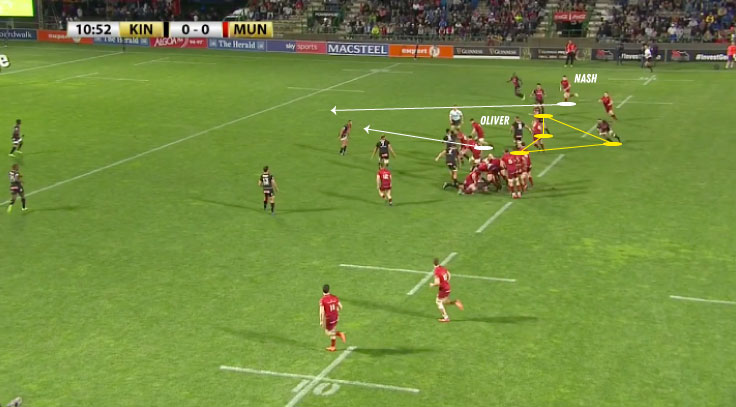 Ideally, Hanrahan would hit Oliver who would either finish himself or dump the ball to Nash who was running a hard, Earls-like support line on his outside shoulder.

The ball didn’t go to hand in this instance – in part due to the ref stepping on Oliver’s support line – but the way Munster constructed the space and the support players within it was really good.

Have a look at the whole thing at regular speed;

Munster’s work off the lineout follows similar patterns with the use of Rory Scannell to the forefront in this particular game.

I’ve gone over Munster’s offensive lineout work quite a bit this season but I haven’t really focused on what happens after the ball leaves the 15m line. I don’t think this area of the game is as sharp as Munster would like it to be just yet, but it is becoming effective in manipulating defences positionally.

Take this example from the start of the second half. First, let’s look at the backline setup prior to the throw.

The first thing I’ll direct your attention at is the four guys in a tight bracket alignment off the lineout. 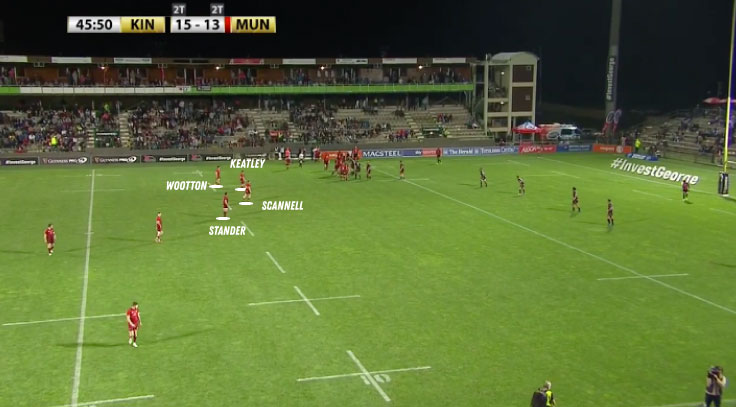 This four-piece poses a few different questions to the Kings defence and, in particular, the presence of Scannell and Keatley at the edge of the formation. Is this going to Keatley? If so, is Keatley tipping this onto Scannell, pulling it back to Wootton to attack the tail gunner, hitting Stander or getting a wider ball to Hanrahan?

What if it goes to Scannell?

All this does is narrow the Kings defence to over-compensate for the questions being posed. 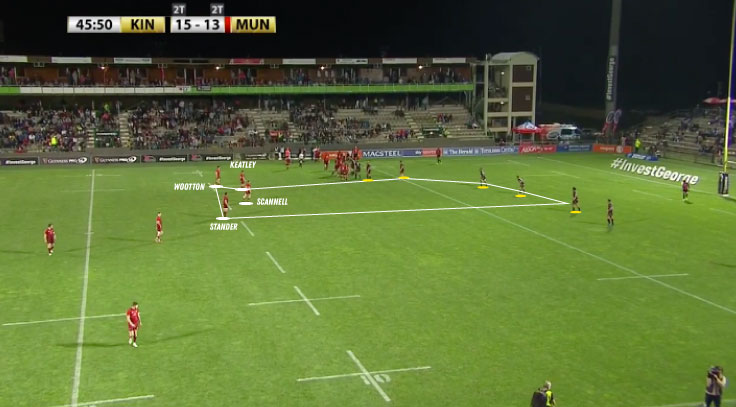 When you track the numbers, you see that Scannell is in the perfect position to challenge the most amount of defenders off this play, especially with the heavy presence of Stander on his outside shoulder.

What we’re actually looking at here is a “stitch” play. 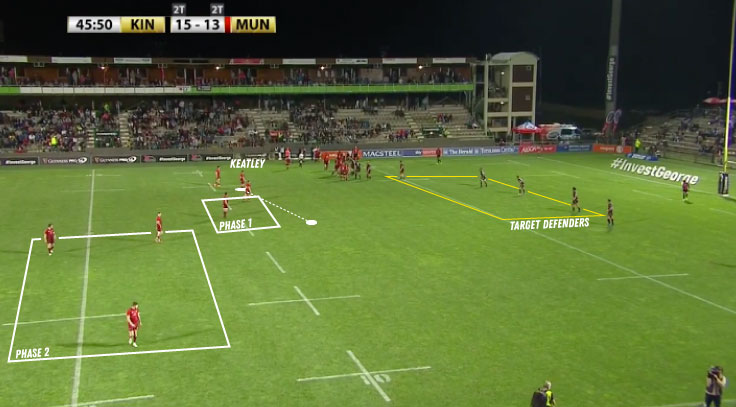 Scannell and Stander are Phase 1 with Hanrahan, Goggin, Nash and Wootton as the Phase 2 outlets. Keatley’s role is to stitch these two phases together by floating around the point of the first phase but it won’t work exactly as planned unless the Phase 1 attackers.

First – Scannell has to sell that the pass to Stander is a live option up until the last possible moment to bind as many defenders on this side of the pitch as possible. Scannell’s incredibly good at this because even rudimentary examination of his game shows that he’s an accomplished carrier, passer and kicker of the ball in these kinds of scenarios.

He does that perfectly with the ball in both hands, and he makes a good hit up once he makes the gain line. Stander is always a viable option on this play, so to call him a “decoy” here wouldn’t be accurate. Both players sell the option perfectly here, and it narrows defenders onto two attackers.

If I’m nitpicking – and I am – the pass to Scannell wasn’t as crisp as it might have been in this instance and that slowed his pace onto the ball ever so slightly. That puts this play slightly behind where it might have been, and I’d look at some of our ruck support lines and how they interact with the scrumhalf’s line as an area where this might improve the play by the 2% it needs to really open sides up.

You can see Keatley coming around the point of the ruck and using the Phase 2 attackers through the hands. Wootton has worked all the way around to be a split option just after Goggin’s decoy screen. 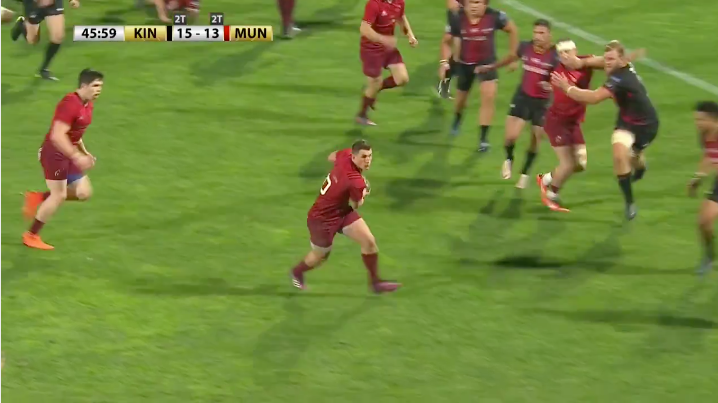 Ideally, Munster want to use Goggin’s decoy line and Wootton’s threat on the pullback to “stall” the Kings lateral defensive movement and give Hanrahan space to work with. If this play goes exactly as planned, then I think the space below shows up when Hanrahan gets the ball in his hands, not as Hanrahan moves forward with ball in hand. 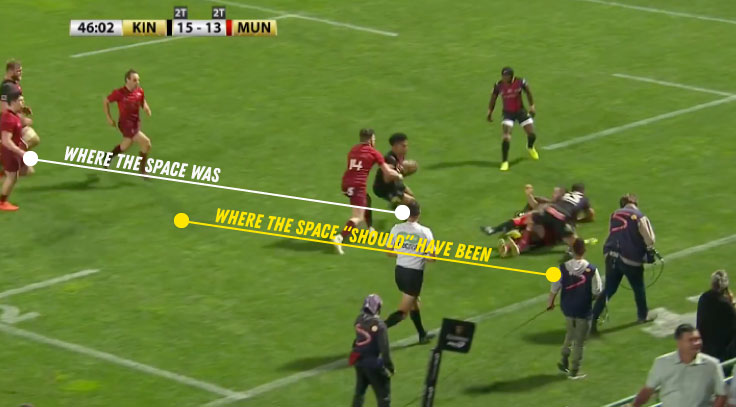 I say “should” in this graphic because the space was still usable, just with a high percentage pass from Hanrahan to Nash that was in danger of being picked off, as it was. If this ball goes to Nash it’s a try but it could have easily been a try up the other end had the young winger failed to get a scrag on Klaasen.

Ideally, I think this variation of the move isolates Nash one on one with one of the Kings wingers with a good angle to work with. It didn’t work out exactly as planned but the encouraging thing was that this play had a couple of different options on it from the first pass to the last. This is the kind of attacking variation that Munster have been adding to their weaponry off the set-piece this season and, while it’s not fully there yet for a few different reasons, we can see that it’s making space, selling our threats and creating opportunities either directly, or indirectly a few phases after.

What really has me excited is our loose play structure, which I’ll cover in tomorrow’s article.