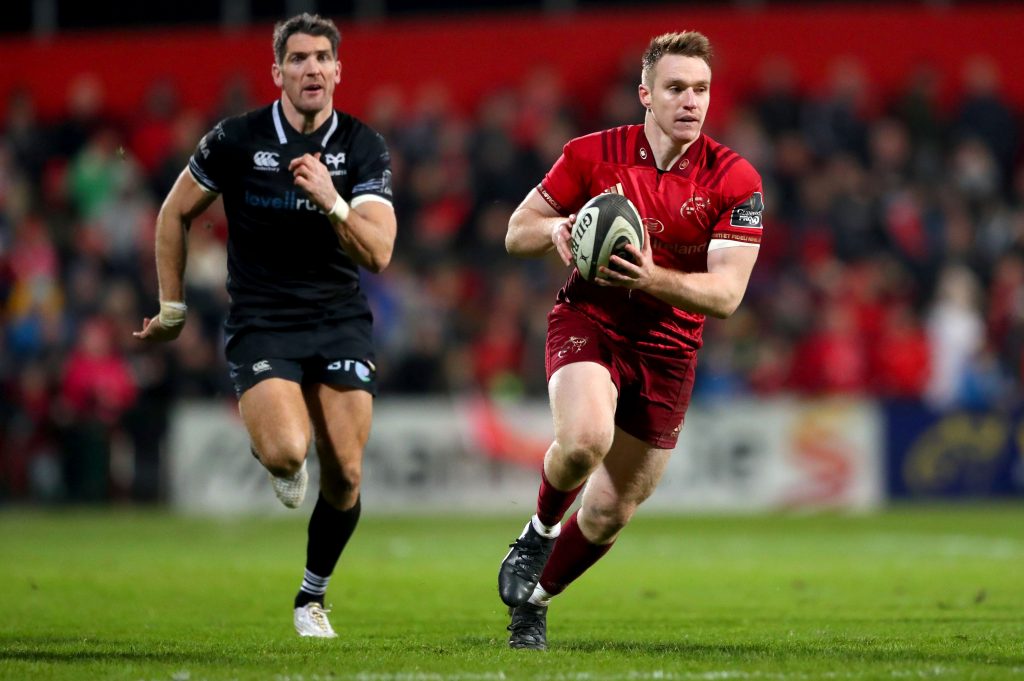 There’s Something About Rory

Are you really that surprised that I’m a fan of Rory Scannell?

I suppose you shouldn’t be – he’s from Cork, he’s a Dolphin man (not literally), and he made the step up to the Munster squad in what was the problem position, the #12 shirt, during one of the most difficult on-field periods in Munster’s recent history. That is some admirable stuff right there. While you’re in a state of not being surprised, I may as well tell you that Rory Scannell doesn’t seem to be rated all that highly outside the Munster media bubble.

Need proof? When Robbie Henshaw went down with a desperately unlucky shoulder injury against Italy at the weekend, the only guy who didn’t seem to get any mention in the forthcoming midfield reshuffle was Rory Scannell. I mean, when we have Joey Carbery getting touted for the #12 shirt with zero professional starts there as far as I know while also being 13 stone soaking wet, I thought that I might put a word in for Rory Scannell.

Do I think Joe Schmidt will plug Scannell in at #12 against Wales? Probably not, no. Do I think that Scannell might be an option there going forward as Ireland look to expand their attacking arsenal? Absolutely.

I know “second five-eight” is an overused term (just be glad I didn’t use “double pivots”) but I think I can wheel it out having lived in New Zealand for a few years. The actual term has come to mean a slightly different thing today than what it was originally used for.

The theory behind the “second five-eights” nomenclature is quite interesting;

The 1903 All Black captain, Jimmy Duncan, is credited with coining the name five-eighths when he decided to take a player from the forwards to add to the backs. The backs at that time consisted of two half-backs, three three-quarters, and a full-back. As the additional player stood between half-back and three-quarters, Duncan came up with the term five-eighths according to the fraction between them.

The player at five-eighths, also known as the five-eighth, could take the ball back to the forwards or pass it on to the three-quarters.

As the game of rugby union evolved, the two half-back positions acquired separate functions. The outside half-back, now known as the outhalf or fly-half, became the first five-eighths in New Zealand under the two five-eighths system. The next player on his outside was called the second five-eighths.

These days, the term is used to describe an inside centre that offers a kicking option as well as the usual duties demanded in that position. The best example of this in 2018 is England’s use of George Ford and Owen Farrell in a “first and second-five” combination. Owen Farrell is, for me, the premier second-five playing the game at test level today. Equally comfortable at 10, Farrell offers all the benefits of having a second flyhalf on the pitch with none of the defensive drawbacks that would normally entail. This isn’t a new phenomenon – you’ll remember Ireland running a similar system against Australia in 2011 with O’Gara and Sexton – but Ford and Farrell are the best contemporary example of that double playmaker system working in 2018.

What are the advantages of that double playmaker system?

For a start, it allows you to play a very offence minded #10 without having to take his defensive stature into consideration – think George Ford, Nicolás Sánchez, Joey Carbery and, for a Munster example, Bill Johnston.

Adding a second-five style player at #12 gives you two vectors of attack, two possible passing platforms and two equally legitimate kick options, which prevents the opposing defence from loading up on the #10 (like Munster did to George Ford at Leicester and Ireland did to Sánchez in November). This lets you split your receivers on attacking centre ruck position, which brings both touchlines into play for the defence to worry about. 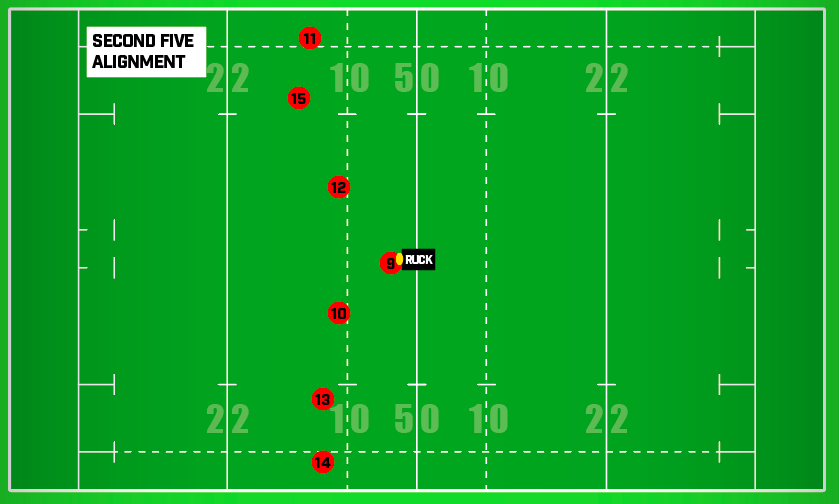 From a defensive perspective, the width of the pitch on both sides are a viable threat in this alignment. A “hit it up” #12 doesn’t, traditionally, have the pass range to hit the outside channels in this setup, or the ability to kick from that position with the same accuracy that the #10 might. Having a guy who can carry, kick and open up the wider areas with their passing creates a number of defensive conundrums in idealised loose play situations like the above or from an attacking scrummage.

Both 10 and 12 can realistically target both sides of the field with their kicking in this system, giving both players a little more room to work with as the opposition will have to cover both sides of the pitch in the backfield, or choose not to and give an easy target.

It also allows a side to run a number of second platform plays to manipulate the opposition and get your trios down the tram lines into space. 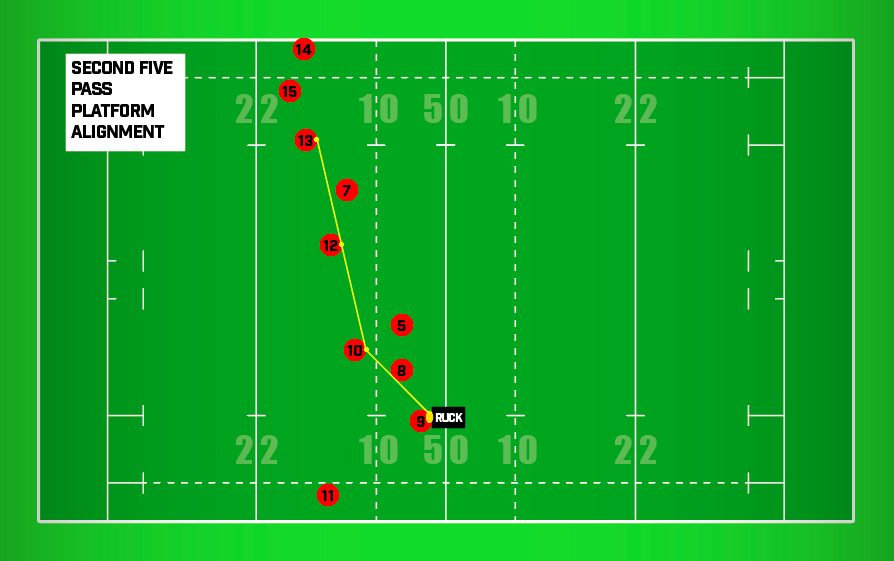 Having a midfielder that can take on that crucial role in space on this play – where they can either kick, carry or release the wide trio – gives you so many attacking options that might not be fully there with a different style of midfielder.

These are just a few simple examples of what a second-five can bring to the backline and, for me, Rory Scannell is the most complete second-five in the country.

He has a great range of passing off both sides, he’s a left-footed kicking option, he can set targets in midfield, he runs excellent support lines, and he’s a big hitter in defence. All of Munster’s recent good displays – all four Glasgow games in 2016/2017, Racing 92 home and away this season, Leicester home and away this season, etc – have had a strong Rory Scannell display at #12 at their heart. He gives Munster an extra dimension that, when we’ve attacked well this season, he’s been a crucial part of.

Any critiques of Rory Scannell that I’ve seen have been incredibly vague and mainly centred around how he “just isn’t up to test level”. If I was to pick holes in Rory Scannell’s test credentials, it wouldn’t be in his skill set or physicality. He’s a solid 98/99kg, has plenty of pace for the position and has shown he’s more than durable on both sides of the ball, especially with skill execution as the game ticks on. That’s shorthand for saying that his fine skills (kicking, passing, goal kicking) don’t drop after 70 minutes of hard carrying or tackling.

Any critique of Scannell that I would have been his level of involvement in big games. For me, he suffered from a bit of inconsistency and a tendency to drift out of games towards the tail end of last season and at times earlier in this season. That’s mainly an experience thing, though, (and dependent on the performance of the 10). That tendency already looks to be falling out his game as he transitions into a senior pro. He’s on track for a third season in a row of having 20+ starts and he’s maintaining his performance to be easily Champions Cup standard.

Could he give Ireland an extra dimension outside Sexton? I think he could. I’m not sure if he’ll get that chance in this Six Nations (even though he’s in the squad) but I think he’s well worth a look there over the summer tour and beyond.

Either way, Rory Scannell will be a crucial part of the Munster attack for the coming years. Ireland is a different story, but I’m more than confident that he has what it takes.