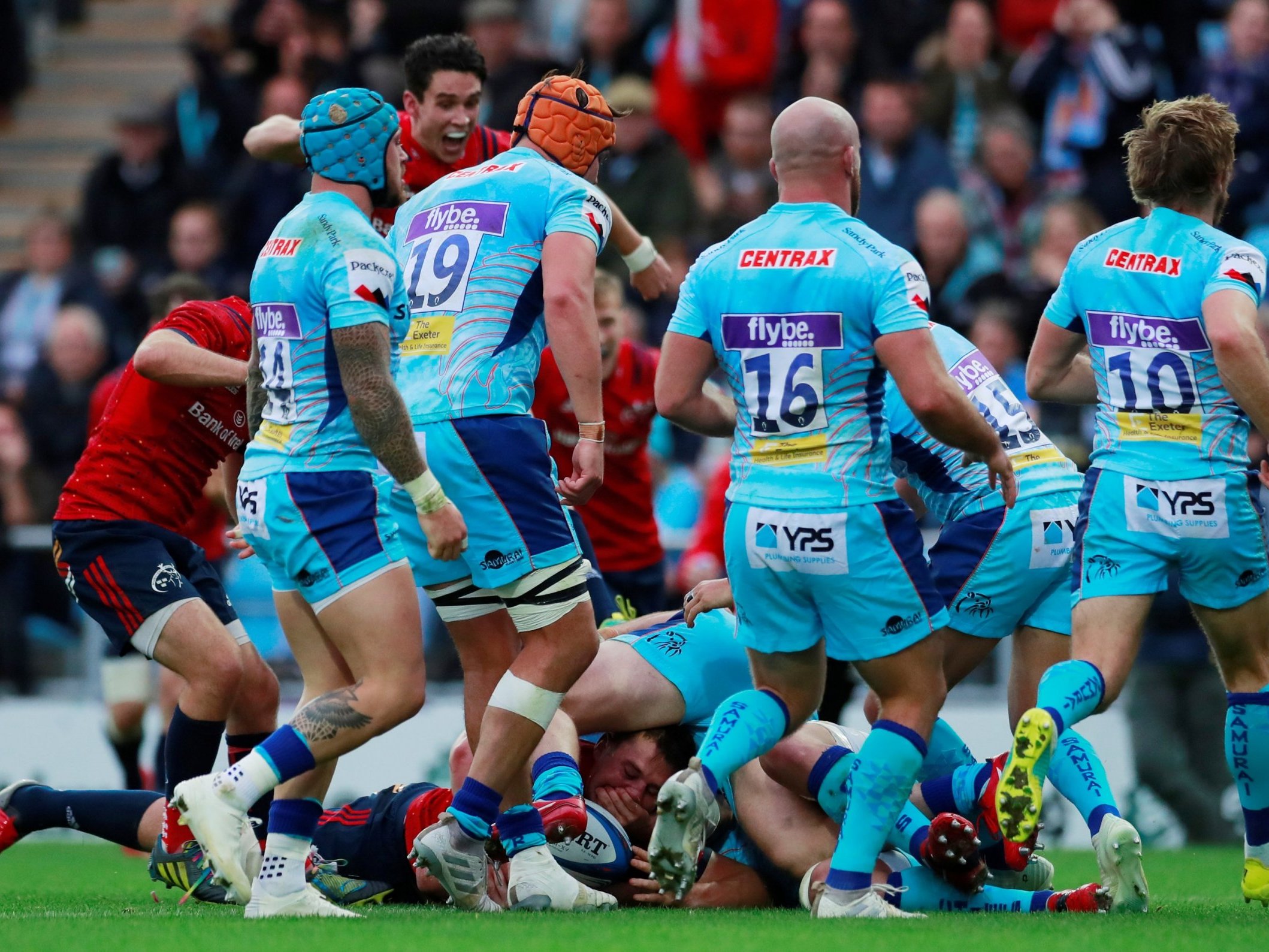 When I tell you that Exeter vs Munster was close to test level when it came to the intensity of the impacts at the breakdown and tackle area, please believe me.

Playing Exeter in Sandy Park is going to be a physical challenge at the best of times but when you combine that with conditions that naturally narrowed the focus of the game, it became a sledgehammer fight in the back of a taxi. That is to say, there was a lot of big shots getting thrown around in a claustrophobic space. The vast majority of the collisions and breakdowns happened in these areas; 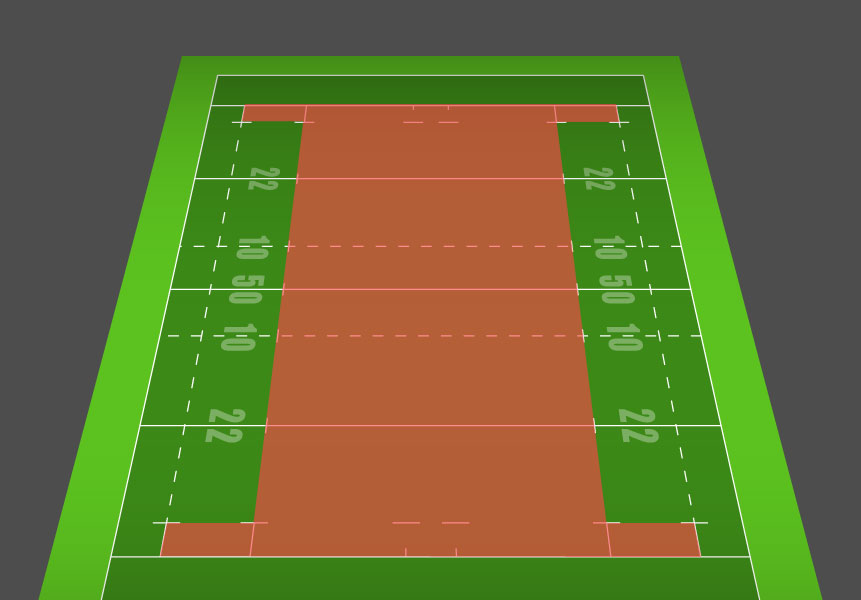 What that means in practice is that the majority of the collisions came in compacted areas of the pitch. The conditions dictated as such. Both sides discovered early enough that passing in winds like there were in Sandy Park on Saturday was a risky business. When you were playing into the wind, the gusts were lifting the ball in open space, which made it difficult for ball carriers to get a lot of separation from the previous ruck.

Here’s a decent example of the wind catching a relatively modest pass attempt from Williams to Carbery.

Now, Duncan Williams is capable of throwing a pass to the inside shoulder when he’s aiming at outside shoulder – a weakness in his game especially on multiphase possession like this – but the flight of the ball suggests to me that the wind had a real effect on the ball, as it did on numerous other occasions. My point is, the wind was literally taking the ball away from players when passed over distances longer than 2/3 metres.

In those circumstances, the pragmatic play was to narrow the focus of your attacking structure and that in turn narrowed the focus of the defence, which meant an inordinate amount of physicality at the breakdown.

Have a look at the alignment in attack and defence off this ruck; 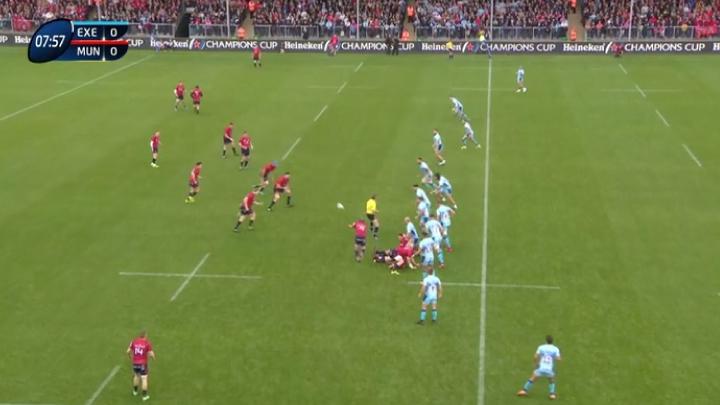 You can see five Munster forwards clustered in midfield with O’Mahony primed to dart back to the short side with Conway. What we’re seeing here is Munster’s roughly asymmetric 1-5-2 pod system which can switch to a 2-4-2 on the reverse play. 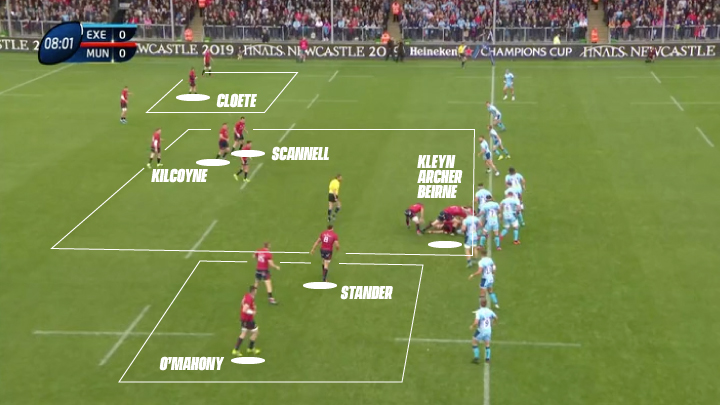 The first wave is to retain possession and generate width which can then switch to a more expansive 2-4-2 on the following phase if needs be.

You can see it working here;

Kleyn’s massive carry exposes an overlap for Munster to attack on the edge, with Cloete as a forward carrying or ruck option. 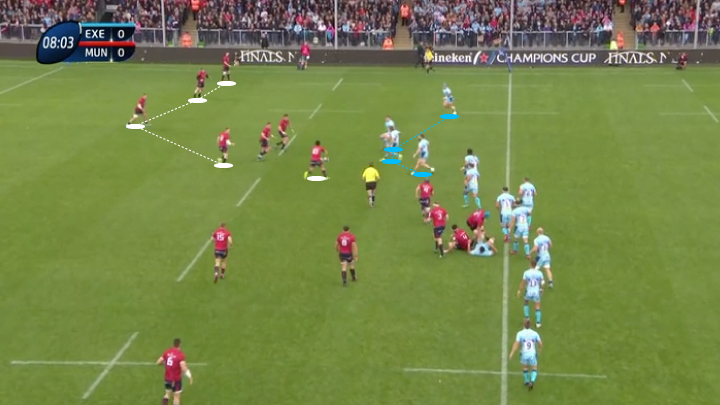 We went for a carry option to Kilcoyne here and spilt the ball in contact – a common enough occurrence in this match.

The screen pass to Rory Scannell was an option here but the extra pace the wind would put on the ball – you can see it snapping the ball into Kilcoyne – would make that a risky enough option even at this range. We would have learned that moving the ball in shorter structures in the loose and off mauls and kick transition attempts would be the pragmatic way forward into the wind.

Any error in handling would essentially give Exeter a wind-assisted punt down the field that would move territory deep into our own 22 in a heartbeat.

Look at this coast to coast transition;

A spill on their 5m became an exit on ours and that risk was on every carry and every pass. It was the same for Exeter. So we had a sledgehammer fight.

Once the tactic of retaining possession to burn time off the clock when you were kicking against the wind became clear, it became a contest of who could retain possession the longest, while forcing the opposition to run the lottery of offside and illegal breakdown entries. If you won a penalty, as both sides often did, the game went to the lineout battle – which I’ll cover tomorrow in Alternative Analysis – but to get that reward, you had to nail your breakdown work. There were 256 rucks in this game. Exeter ran at 97% (130 out of 134) and Munster ran at 97.5% (119 out of 122). To compare, Ireland vs England in the Grand Slam game at Twickenham had 252 rucks, to give you an idea of the intensity of the battle here. Munster just about edged the ruck battle from a numbers POV and that was based on some excellent work rate and technique at the breakdown. Here are Munster’s attacking breakdown numbers;

Tadhg Beirne stands out here, again, for his accuracy and work rate. He had the most amount of dominant ruck actions while also being the top ball carrier. Jean Kleyn, Stephen Archer and Dave Kilcoyne lead the way after Beirne, with Archer and Kilcoyne being particularly impressive as their numbers are after just 45 minutes of action.

Peter O’Mahony had a quieter day out than what would be considered his norm but a lot of his work was in wide pod support in the second and third quarters which might explain his dip after the first 20 minutes where most of his numbers were generated.

Niall Scannell’s work was good too, as this little example shows. A pop pass, an angle, and a dominant clean on Cronin’s line.

The pick of the backs was Dan Goggin, who had an excellent day in defence and in ruck security.

This is just one example but he showed excellent power, anticipation and technique during this game and it’s the kind of player’s player performance that Joe Schmidt takes notice of.

Munster’s work was physical, direct and good for the most part and it’ll be interesting to see how this translates into slightly easier conditions against Gloucester this weekend.