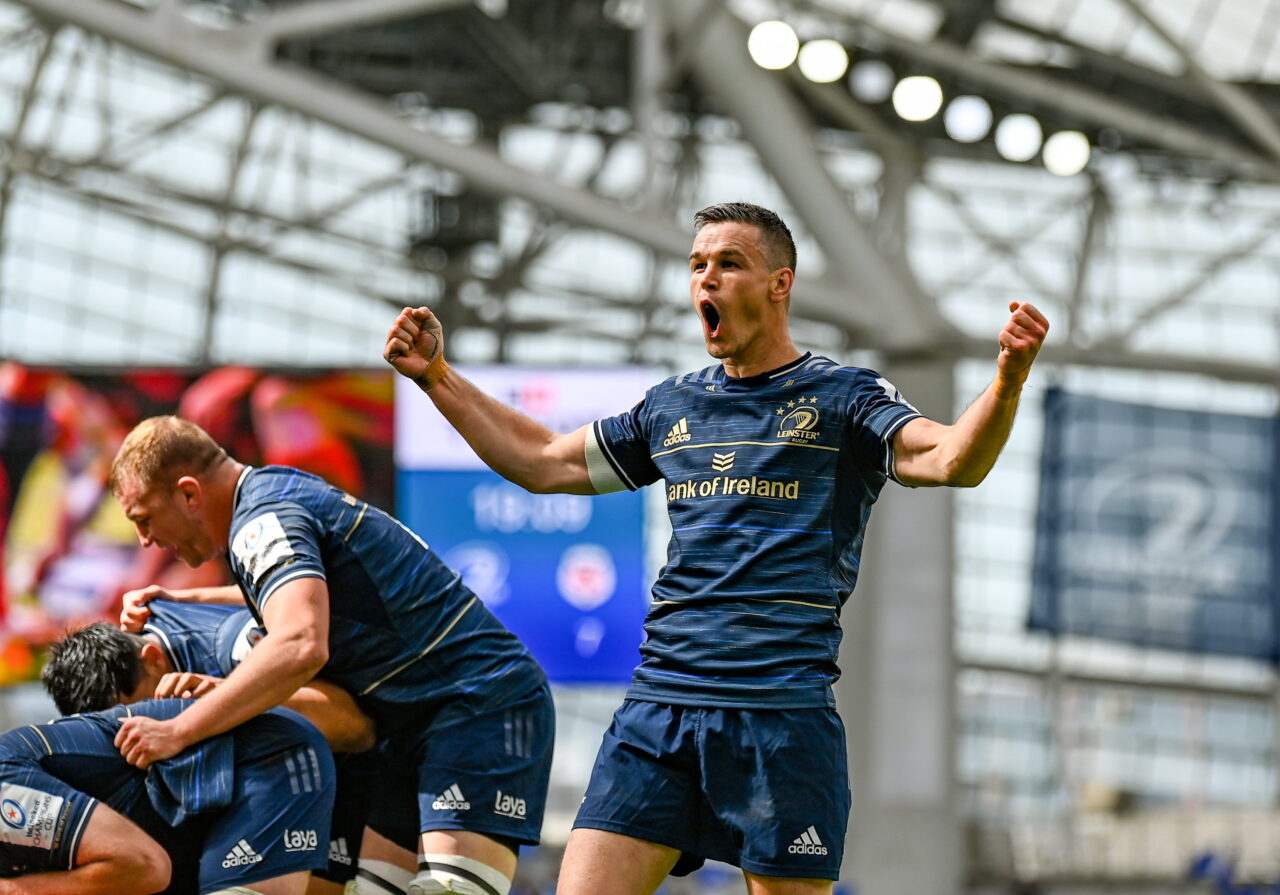 The Ship of Sexton

Existing at the same time as this Leinster side is as tough as it gets.

For Johnny Sexton to still be doing what he’s doing at the level he’s doing it at is pretty remarkable. He’ll be 37 this July and who’s to say that he won’t be celebrating that birthday with a fifth Heineken Cup medal? Every single one of Leinster’s four Heineken Cup wins to date have had Sexton starting at #10 in the final.

Yet, in December 2008, Johnny Sexton wasn’t even sure he’d have a contract at Leinster for the next season. In an interview with the Irish Times in December 2009 – a few months after his ascension against Munster in Croke Park and then in the final against Leicester before making his debut against South Africa in November of that year – Sexton laid bare where he was as at.

“I was very low, depressed probably, around Christmas time last year. I wasn’t in the Leinster team and was wondering would I be still there at the end of the season. This is a team I always wanted to play for; my home team and one that means so much to me. I basically decided to do everything possible to make it. I knew it was going to be tough. It’s funny, I went to see [Michael Chieka] to tell him there were aspects of my game I needed to work on and one was place-kicking.”

Sounds surreal to imagine Johnny Sexton, of all people, wondering if he’d be kept on at Leinster, doesn’t it? But the turnaround didn’t just come off the bench in Croke Park, as if by magic.

Sexton credits his turnaround in 2009 with a game for Ireland A.

“… the catalyst in terms of my situation came when [Declan Kidney] gave me a chance in the A team just after Christmas. I’ve sort of gone on from there, been happy with my form since so that was probably a big break for me because it was that performance that probably got me back in the Leinster team.”

If you go back to 2008-2009, that could be considered to be Sexton’s “breakout” year up to a point. I would class his ascension in the semi-final off the bench as almost a different season, in some ways, because it was so… unexpected? Is that the right word? I remember watching Leinster quite a bit back then and being relatively lukewarm on Sexton as a player, even if he did kick the drop goal that essentially won the Magners League for them in 2007/2008. My focus was on the Heineken Cup that year, a pretty common phenomenon around the time when “the league” was considered something of an afterthought when compared to Europe. In 2008/2009, I was thoroughly unimpressed with the Sexton I saw when Munster beat Leinster 18-0 in the RDS. That was his fourth season as a senior player and the fairly widely held opinion of him at the time was that, at 24, there didn’t seem to be much there. Plainly a good player but “not trusted” to be the goal kicker, something that weighed heavily against flyhalves at the time, certainly in Ireland. His resume to that point had been pretty ordinary.

His first two seasons as a senior player saw him play five times – total – before beginning to rack up minutes and starts during his third full season. Leinster failed to get out of the pools during the 2007/2008 Heineken Cup season but they did manage to win the then Magners League that year, as I mentioned above, with Sexton at #10 and Contepomi at #12 for most of the league run in with Gordon D’Arcy absent with a broken arm he suffered in the Six Nations.

In the big European games to that point, however, Contempomi would generally start at #10 with Sexton on the bench.

That trend broadly continued for 2008/2009 with Sexton still, generally, being perceived to be the understudy to the then 32-year-old Contepomi. Contepomi signed a deal to leave Leinster for Toulon in March of 2009 so you could get the impression that Leinster knew all along that Sexton was going to replace Felipe like for like, but I don’t think that’s an accurate reflection of their succession plans. At the time, Leinster CEO Mick Dawson said;

“A hugely popular and charismatic player among our loyal supporters as well as in the dressing-room among his teammates, I know how determined Felipe will be to finish this chapter of his career on a high. While we did everything in our capacity to tempt Felipe to stay, he and his family will leave Leinster with our best wishes and thanks.“

Contepomi was offered a four year deal by Toulon – absolute gold dust to a 32-year-old flyhalf – and Leinster just couldn’t compete with the security or, likely, the money that Toulon were flinging around. A lot of Sexton’s bigger minutes during 2008 came directly as a result of Gordon D’Arcy’s broken arm sustained during the Six Nations of that year. When D’Arcy finally recovered from that injury in December of 2008, you can see why Sexton was worried about his long term future. As soon as D’Arcy and O’Driscoll were the settled pairing in Leinster and Ireland at that stage and the 10/12 pairing of Sexton and Contepomi would clearly not continue as long as D’Arcy returned hassle-free. The presence of Isa Nacewa – signed the previous off-season – would also have been a concern as Nacewa can, and regularly did, fill in at #10 for Leinster, as he had done at the Blues before that.

The minute D’Arcy returned from injury, Sexton was out of the team. He didn’t play for the whole of January – Leinster used Isa Nacewa at #10 for their game away to Wasps in Twickenham with Contepomi at #12 and D’Arcy on the bench – and Sexton only returned as a bench option in February from then until that fateful day against Munster when everything changed.

Contepomi got a season-ending knee injury, Sexton had a massive performance and, from there, he was the main man at Leinster. A few years later, after some rough edges to his game were buffed out, he was the main man for Ireland. That, in a way, is almost doing the scale of his importance a disservice. For me, Johnny Sexton is the best Irish #10 of all time. Ronan O’Gara is more important – he lead the ascension that allowed Sexton to be who he became – but Sexton is something else entirely. He has no holes in his game. Tactically, offensively, defensively, athletically, mentally, emotionally… I don’t think there’s anyone who can top him as far as I’m concerned.

All this from a guy who wasn’t sure he’d even have a contract at Leinster in 2009/10! The sliding door moment of all moments. Sexton has four European Cups to his name and is quite likely to add a fifth. He has won Grand Slams, he has Six Nations titles, he has won almost everything it was possible for him to win and it all could have slipped away to nothing if Gordon D’Arcy hadn’t broken his arm in 2008.

In a lot of ways, Johnny Sexton is the literal embodiment of belief. If you’re a young Leinster player or Irish player in camp, the respect for Sexton is probably hard to quantify. The belief he imbues in you because you have seen him doing everything you want to do is the ultimate force multiplier. And he’s still out there doing it at 36, soon to be 37, years of age. By the time Ronan O’Gara was 36, the drop off in his game had become quite clear. Dan Carter was already looking like a pale imitation of the same guy by the time he was 34. The only parallel you can make is Johnny Wilkinson, who was still operating at a high level by the time he retired at 35.

By the time Sexton retires, if everything goes to plan for him injury-wise, he will be 38 years of age. He is, by every definition you could ask for, a truly generational talent. He didn’t look it in 2007 but as the game changed, the window of what a great #10 needed to be moved towards a guy like Sexton and it has stayed there ever since.

How do you replace Sexton? You don’t. You actually can’t. You can probably get a good player in to play #10 for you but you can’t get the literal physical manifestation of belief like Sexton is. In a Munster context, it’s like replacing Paul O’Connell AND Ronan O’Gara if they happened to be the same player.

That problem is coming down the tracks for blue and green one way or the other and, in doing so, the one constant in Leinster’s Ship of Theseus since 2009 will finally have to be replaced.

The ship wherein Theseus and the youth of Athens returned from Crete had thirty oars, and was preserved by the Athenians down even to the time of Demetrius Phalereus, for they took away the old planks as they decayed, putting in new and stronger timber in their places, in so much that this ship became a standing example among the philosophers, for the logical question of things that grow; one side holding that the ship remained the same, and the other contending that it was not the same.

Building a generational side is very much like the Ship of Theseus thought experiment. If we look back at the gestation of this Leinster side in 2015/16 – the year of Sexton’s return after his two years in Paris – there have been different variants of the team come and go as time progresses. Guys like Heaslip, Toner and, later Fardy and Nacewa, were always going to be temporary parts of the ship as they aged up and out of the side. Other pieces, like Furlong, Porter, Ryan, Kelleher, Doris, Van Der Flier, Ringrose and Keenan emerged as the seasons progressed and built experience/quality as they went. When Leinster got the chance to address key weaknesses in the squad from outside, they did so really well – Henshaw, Lowe, Gibson-Park, Fardy, etc. Other guys they thought would be key players, like Dan Leavy, ended up retiring prematurely but that’s the game we play.

Sexton isn’t part of the ship – a piece that can be replaced or patched up – he’s the guy steering the ship, every bit as much as Cullen and Lancaster. As long as Sexton is a contracted senior player, whether he’s injured, training or playing, he will drive the onfield performance of this Leinster side.

For everyone else, the key is to control the pace of your own boat while you wait for the inevitable. Once Sexton steps off the ship for the last time, there will be radiating opportunities for anyone who wants to steal Leinster’s thunder but as long as he starts, as last Saturday in the Aviva showed, Sexton and Leinster will take some stopping. Then, as now, he is the beating heart of this Leinster side. Whoever wants to take what they have – be it Ireland selection dominance, URC dominance or European glory – will have to start by stopping Sexton and then winning the era after him.