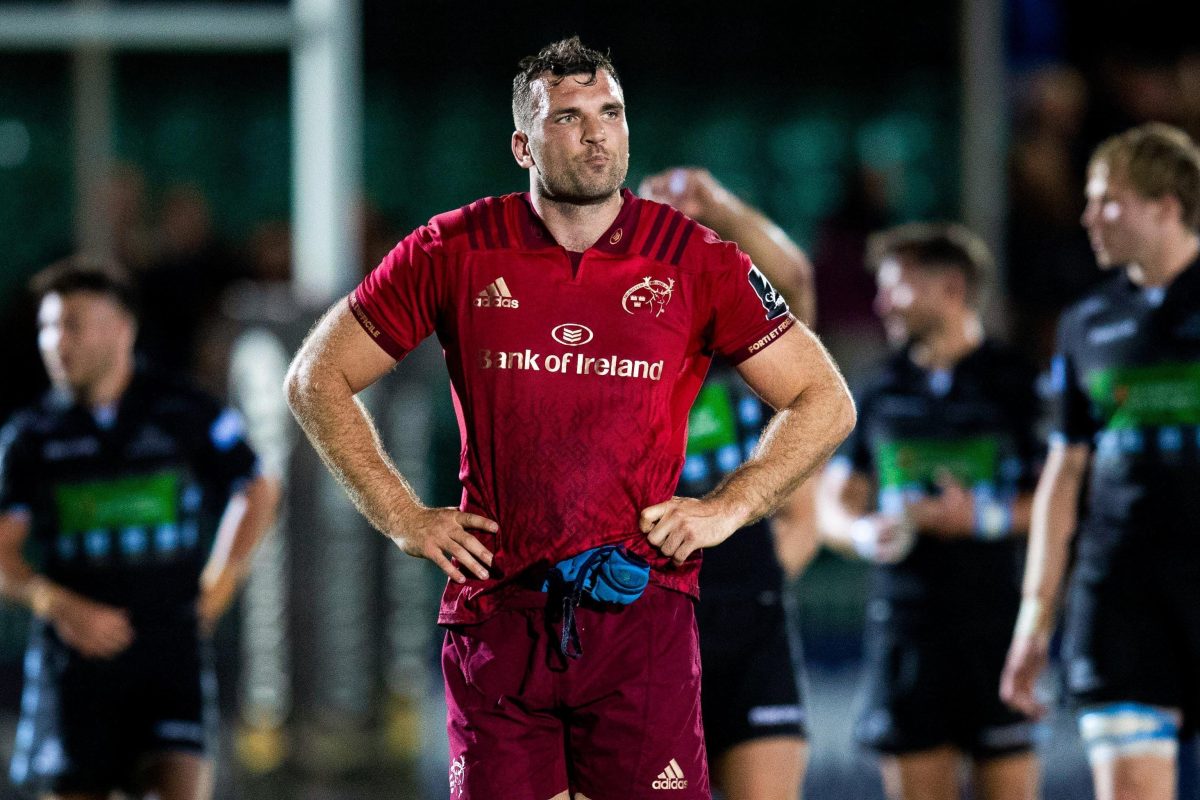 The Scaffold on the Build

Munster’s work at the lineout on Friday night was disappointing, to say the least.

On the face of it, Munster lost only one lineout to Glasgow but when you look a little closer, you can see a plethora of missed opportunities.

The first thing to note is that Glasgow made sure to avoid giving Munster any kind of lineout platform in the first half of this game. The reasons for this were two-fold. First, Glasgow had a lot of decent phase possession of there own so exiting wasn’t a massive concern for them as the game played out. Second, with the wind at Glasgow’s back for the first 40, the last thing they wanted to do was give Munster a platform to maul, which would possibly earn penalties and, at the very least, chew up the clock in a situation where Glasgow would be expecting to run up a bit of a lead.

Munster had two lineouts in the first half of that game.

The first took place just halfway between Glasgow’s 22 and 10m line. Let’s have a look at the build.

There are two notable elements to this.

(1) O’Donnell standing as the receiver.
(2) O’Callaghan’s route from behind Holland on a decoy run to the front before joining the maul.

The throw and lift were pretty OK here but our security after the landing is pretty poor even if you account for the Glasgow illegality. In my opinion, the Glasgow loosehead prop Oli Kebble is offside at the front here under Law 18.29 and Jonny Gray looks to be collapsing this after potentially grabbing Holland in the air and coming down on the wrong side without claiming possession.

Kebble’s line and Gray’s landing position behind Kleyn meant that this maul was in trouble from the start but there was still an opportunity to drive.

Kilcoyne, O’Callaghan and O’Donnell did not create a secure “lock” for Holland to drop the ball into, and you can see the possession squirt loose on the drop. For me, Kilcoyne and O’Callaghan need to brace their side better – even with Kebble’s pressure – to preserve the space for O’Donnell to latch. If we could secure the ball, we’d have a chance to sell an offside for Whitehouse and possibly earn a penalty. Instead, we got a ropey possession that lead to a few phases but nothing more.

The second lineout happened on our own 5m line with a shortened lineout. At this stage, we were already 15 points down – not an insurmountable deficit by any means – but we had endured an awful lot of pressure to this point and needed something from the last 10 minutes of the half. In this situation – a shortened line – you expect competition in the air but your improved numbers in the line give you a shot at generating a good position to exit. Ideally, you’d take the ball down, power through a few phases and then exit if you don’t catch an opportunity to break.

In this instance, the throw is OK but the lift looks a little wild. Watch the way that Kleyn’s shape changes in the air after he touches the ball with his left hand.

That pulls him away from “latching” the ball in the air and forces the drop away from the ball. Luckily we claimed the spill but it was a sign of tiredness and inaccuracy from the lifters in this position. Ideally, we’d want Kleyn taking this at the front straight on and at the top of his jump before allowing him to bully Harley in the air to give us a good position to maul or break from around the corner through Sherry.

In the second half, our lineout was structured better for the most part, even if we didn’t use it to its full potential.

We did have a bad botch late in the half between throw and lifting pod that lead to clean steal for Glasgow;

But for the most part, we were able to get our own ball down and try to make something happen with it.

Have a look at this one;

Does it look familiar?

It should as it’s a duplicate of the first lineout I showed you, except Beirne is running the O’Callaghan role and Wycherley is in Holland’s place. Everything about this attempt is better. Beirne’s line is closer to the lineout, which forces Kebble and Harley to step to the front, which gives Wycherley an uncontested take at the front.

O’Donnell – in the same spot as last time – gets solid possession protected by Beirne and Kilcoyne’s touchline brace, and we can spin the ball wide.

But was there a better option? 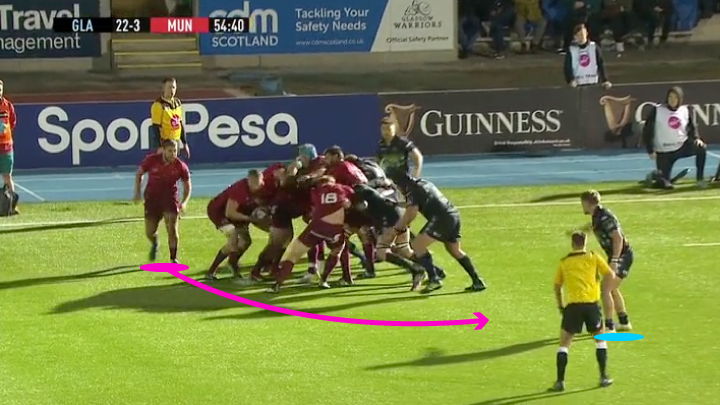 We isolated a Glasgow halfback in a tonne of space off the maul and perhaps a swivel pass to Marshall coming around the corner might have been the better option rather than going wide to Williams like we did.

As the half wore on, we began to generate more space around the fringes off our mauls and maul feints, and we seemed to have a few extra plays to take advantage of Glasgow’s narrowing in on the maul.

Have a look at this one;

This is really interesting because I think it’s got two possible options, despite this one being botched ever so slightly on the drop by Wycherley and Botha.

First, look at the landing area of Wycherley, Cronin and Beirne – right at the front. Let’s look at the first option as it played out; 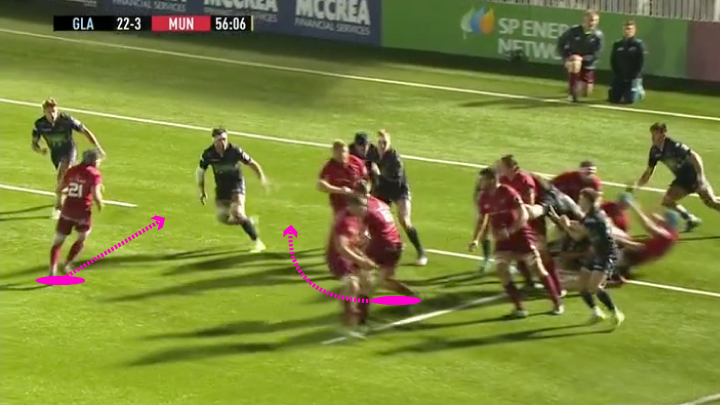 Munster’s surge towards the front drew Glasgow in, and that allowed Williams and Marshall to have a cut at a disrupted alignment at the tail. Using Archer as a corner, Marshall could get a good look at a potential linebreak with Williams running a support line into the space for a potential offload. I don’t think this was the plan on this occasion though.

I think we were going after a different target – Ali Price.

Look at Jean Kleyn’s line as he comes around late from the back pod. I think Munster were looking to get Kleyn a one on one with Price coming around the side of the lineout with Botha pivoting the ball to him but the mishandled possession forced the other option. 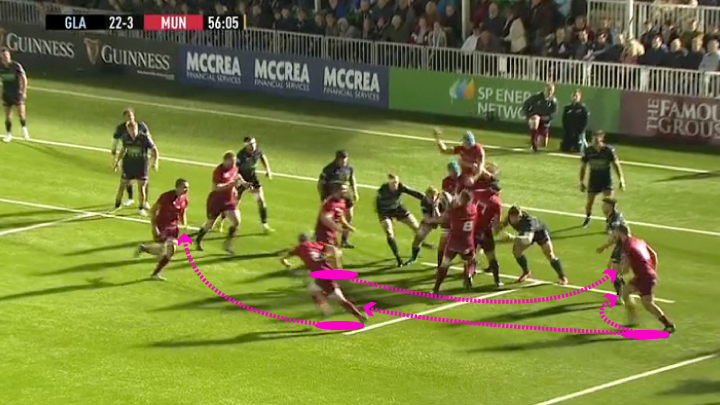 Williams line would still hold the tail gunners attention but I think this play is designed to have the opposition loosehead (or front forward defended) bite in on the maul and leave the tram defender – usually the scrumhalf – isolated. Jean Kleyn vs any scrumhalf one on one 5m out? That’s a try.

Marshall can either spin away for the first option or flow in behind Kleyn for a finish if he needs an assist.

If Munster are to handle the Ospreys on Friday, we’ll need to be way more efficient with our use of the lineout, how we maul, when we maul and our choices once we bring the ball down.

The elements are there but we need more accuracy than we showed in Scotstoun to say the very least.