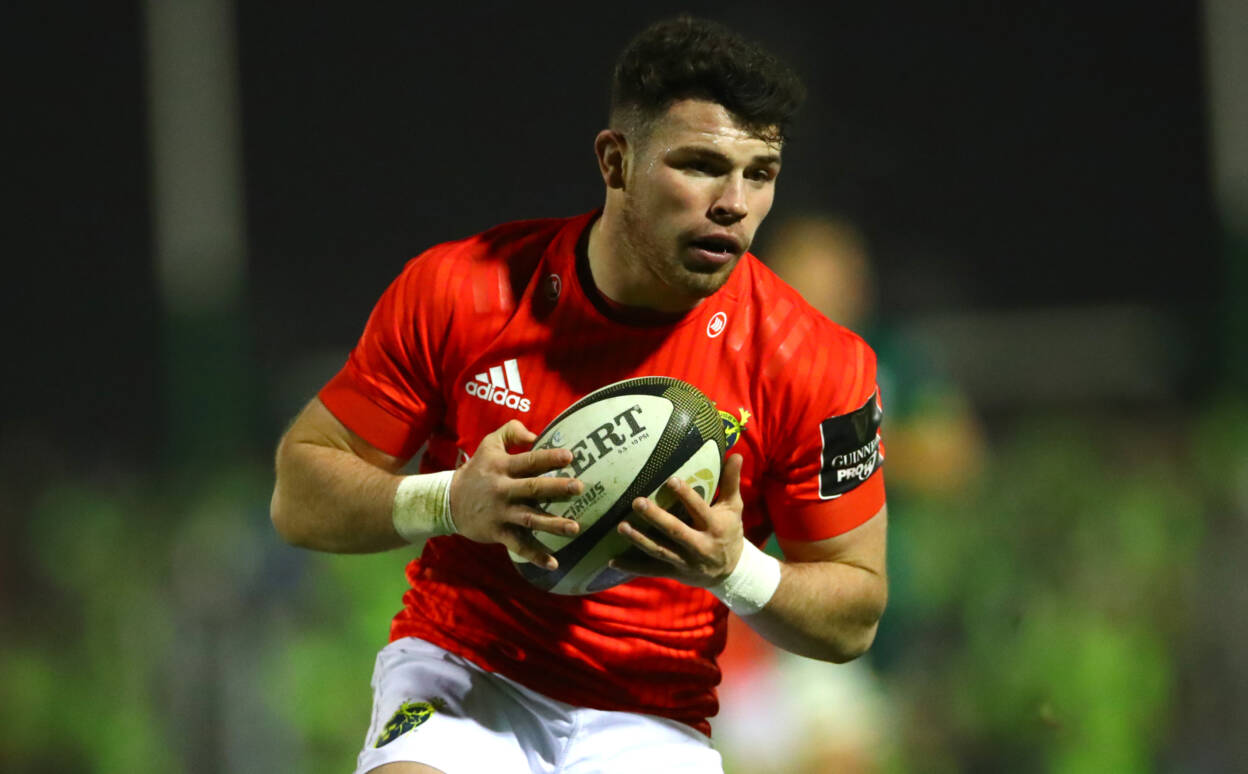 One thing I’ve found to be consistently true about professional rugby is that it is way more complicated than it looks.

Here’s the moment again to jog your memory.

I received a lot of correspondence in the aftermath of this try ranging from “Nash can’t pass” to “Leinster would have converted this under the posts”. Most of the points raised spoke about how “simple hands” rather than a “miss pass” to Sweetnam would have created a clear try-scoring moment rather than a 50/50 corner race that, ultimately, fell in Scarlets’ favour.

Let’s have a look at it in detail.

To start, let’s go back to the lineout and keep in mind that the Scarlets are reduced to 13 players. Munster are aligned quite narrowly off this lineout and the intention is clear. 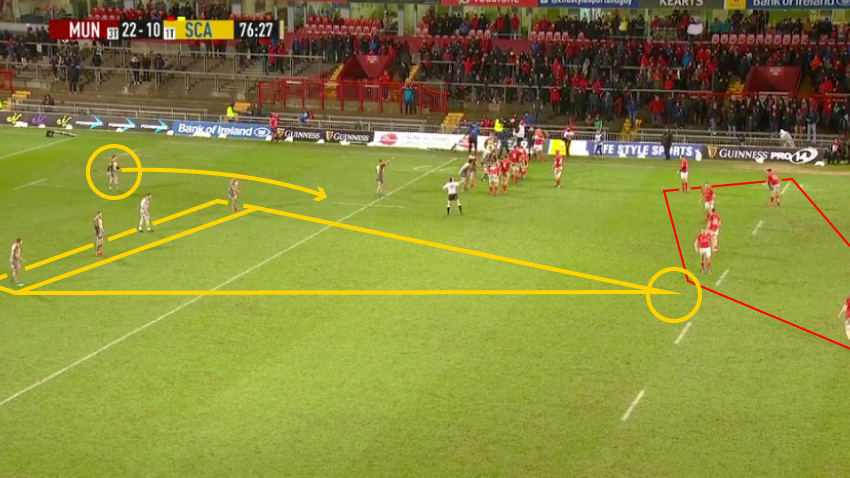 We want to compress the Scarlets primary line into a tight area of the field to create our ideal picture and this is an achievable aim with a two-man advantage. The lineout itself is vitally important. We have to snag as many of their forwards in the maul as possible to ensure that we have an immediate numbers advantage on the break.

Coombes takes the ball at the front and sets a strong maul platform that immediately draws in six of the seven Scarlets’ forwards.

Crucially their most mobile forward defender – Josh Macleod – gets drawn into their attempts to nudge the Munster maul towards the touchline. He’s not in the worst position to play spoiler here as he likely knows that Munster will look to move this ball wide so he’s right where he’d need to be to scrag at McCarthy as he attempts to break. Macleod, however, makes a mistake. 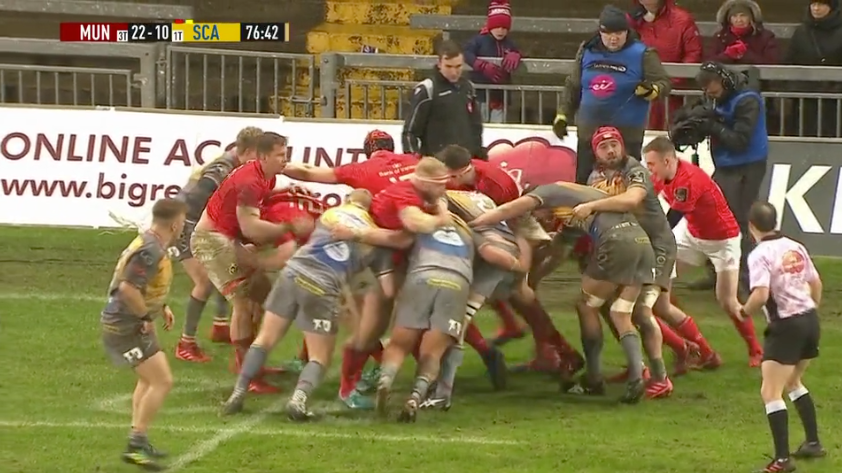 He looks for the OK from the referee and, in doing so, takes his eye off the ball and McCarthy wastes no time in moving the ball out. Only the Scarlets replacement hooker remains in a position to defend the break.

Munster ran a double pinch off McCarthy’s pass from the maul.

O’Donnell screens Scannell’s pass to Hanrahan and Farrell runs a hard line to screen for the pass to Nash but I think the Scarlets defender was committed to shooting up on Nash regardless.

Now we have our break.

Here are the key players; 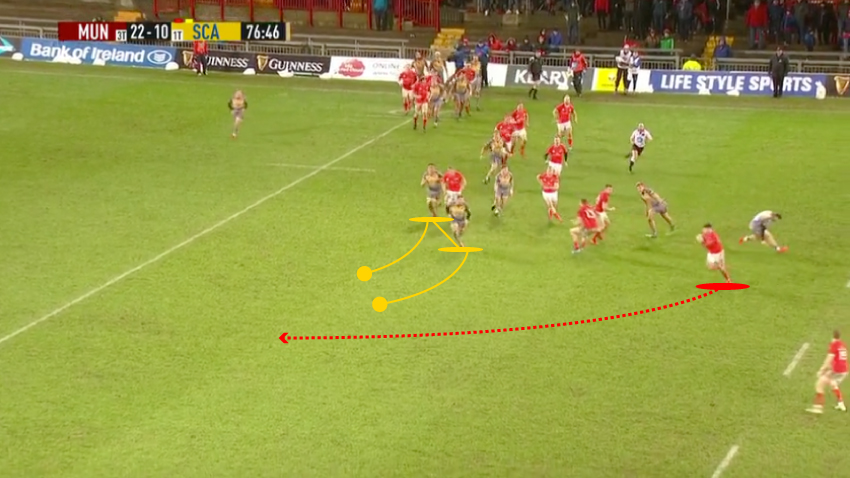 When Nash breaks around the corner, he has an immediate race to win with the covering Scarlets players who were taken out by the first screen.

Nash is one of the quickest players in the Munster squad – your classic fast-twitch runner – so he gets around the corner and wins the race for position with the defenders. The key to this is Haley’s relative position to Nash as the break develops.

Nash’s line to beat the defenders takes him across the field and Haley tries to keep a workable passing line open. Even then, Nash is really turning the afterburners on here and that makes passing to Haley a suboptimal decision, for me.

Haley’s position on a side-on view is quite deceptive. Haley is much closer to Nash than it might seem on the footage. If Nash passes to Haley on this move and, we assume, that he chains possession over to Sweetnam we have to play this through logically. 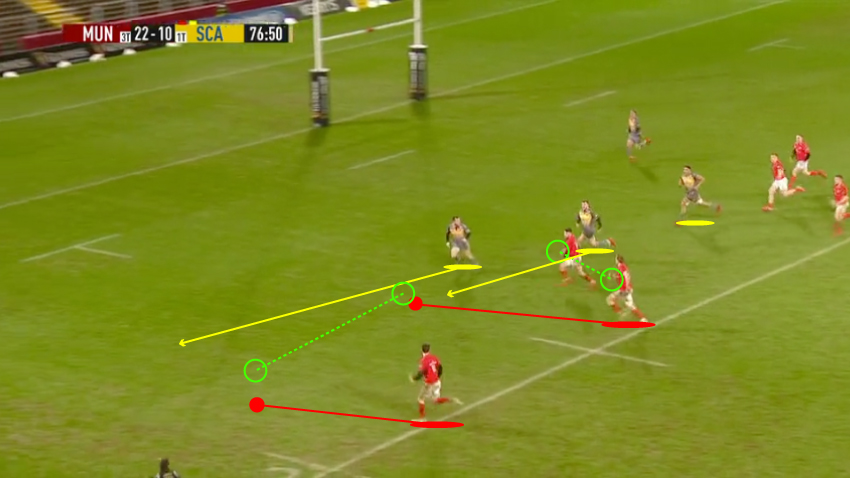 Passing the ball back to Haley on that tight line would remove Nash’s isolation of the last defender and bring the other Scarlets defender into the game. Haley would have to make up 3m of space to get to Nash’s advanced position and Sweetnam would have to taper his run to match.

If Haley had matched Nash’s break stride for stride, I think the “simple hands” concept might be a more obvious play here.

For me, Nash did well here. He used his pace to beat the first defender and held the last defender pretty well. The Scarlets defender went for broke on the chase to Sweetnam and did really well to close down that space.

As it played out, my only nitpick with this was the accuracy of Nash’s pass across the space to Sweetnam but, in the conditions, it was somewhat excusable. If Sweetnam is able to run onto this pass without breaking stride…

… he probably surges past the last defender anyway. You can see how narrow Haley is to Nash on this GIF and how a potential pass to him might have crumpled up our 3 v 2 here. I get Nash’s decision to make the wider pass.

Either way, simple hands are never that simple in the heat of the game.