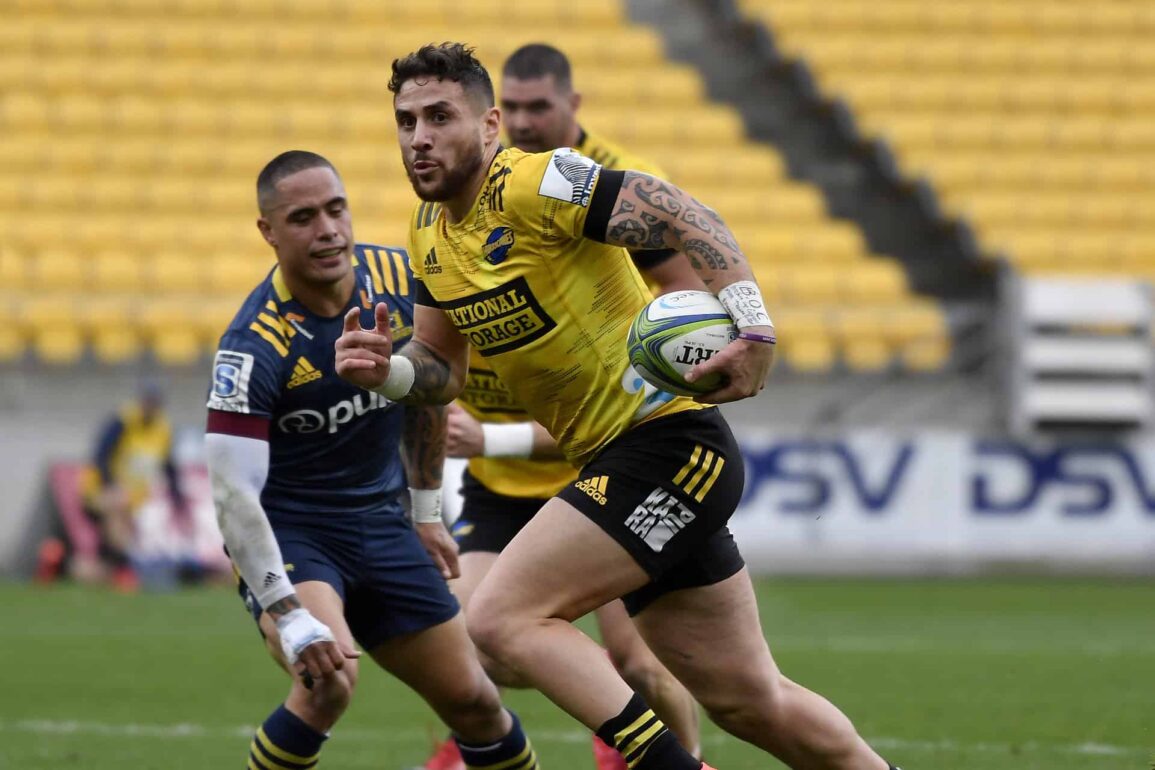 How is Jason Holland lining up the Canes?

By Tom Savage7 min read
If you haven’t heard of screens when talking about rugby mechanics, I can only assume that you’re somehow reading this article in 2008. We finally beat the All Blacks (twice!) but the World Cups – don’t ask; same old, same old. Oh and there’s this pandemic thing too but you’ll find out all about that in 2020.

For everyone else, screens are a regular sight on all kinds of rugby pitches, from amateur level on up to elite. They’re usually combined with an overall forward structure, be it 1-3-3-1, 2-3-2-1 or 1-3-2-2. You have the forward shape – let’s say 3-3 in the central space – with another player, usually a back, tucked in behind the screen.

But why should it be that way?

I’ve included the #13 on the second screen pod of three here because the Hurricanes often use midfielders and other backs in these screen pod, as opposed to forwards exclusively.

And really, why shouldn’t it be that way?

Sometimes I think we can get so bogged down in what is considered normal that we just make flat assumptions on how a play should look. If we limit ourselves to thinking that a screen play can only be a pod of three forwards with a creative player tucked behind it, I think we miss out on a lot of possibilities.

Why shouldn’t midfielders or wingers stand in the pod shape?

Why can’t forwards take the ball behind the screen?

The usual reason is that their level of skill on the ball is unevenly distributed across the team and, to a certain extent, it is this fact that most forward shapes try to minimise. If you have props and locks that aren’t very comfortable passing the ball over a long distance to a high level, it makes sense to use them in a position where they won’t have that lack of skill exposed. You would put those players into a forward pod off #9, perhaps, where they are in a position to catch and carry the ball, with a short tip on or offload as a tangible option for them.

This is why some forward shapes end up looking predictable. Yes, every team has a list of priority ball carriers that they want to get on the ball wherever possible but in a lot of teams, this can end up with very identifiable ball-carrying patterns. Ireland were somewhat guilty of this in the last few months of Schmidt’s tenure.

If you had a bunch of forwards that had a rounded, balanced skillset and a system that prioritised variety, you could turn a pretty rudimentary forward shape and screen scheme into something infinitely more dangerous. That seems to be the guiding principle of what the Hurricanes have been doing this season. The shapes they use are pretty basic but the options they are able to use off those shapes are really interesting.

That couldn’t happen without a high level of skill amongst their forwards, and when we look at their back five, we see a consistently high rate of passing from 4-8. In every round of Super Rugby Aotearoa so far, the Hurricanes second-row and back-row have consistently outpassed their opposite numbers from a raw number perspective.

Blackwell, Scrafton, Fifita, Flanders, Prinsep, Kirifi, Savea are attempting more passes, on the whole, than the units they play against. They aren’t always 100% accurate with those passes but the attempts alone open up a lot of variety for them. Ardie Savea, for example, made 11 passes in the Canes game against the Highlanders – the most of any player on both teams outside the halfbacks.

That doesn’t always scan with winning the game – there are more variables at play than that – but it does give us an idea of how the Hurricanes are choosing to play.

On a base level, their starting back-row has two Action Flankers – Kirifi and Savea – and both are talented passers of the ball.

Savea has been starting at 8 a lot for the Canes even though you might not class him as a “traditional” #8 but it doesn’t matter all that much in their system. Savea is an effective breaker off the scrum because, for the most part, he’s linking off the base of the scrum with Perenara and Garden-Bachop rather than charging off on his own.

That all plays into the larger scheme ran by the Hurricanes. All of their pack, but their back-five in particular, are expected to be able to pass and this means that roles in a 3+1 pod are pliable by design.

When your players have a rounded skill set, why shouldn’t the flyhalf stand in the front line of a wide screen with the #8 as the +1? 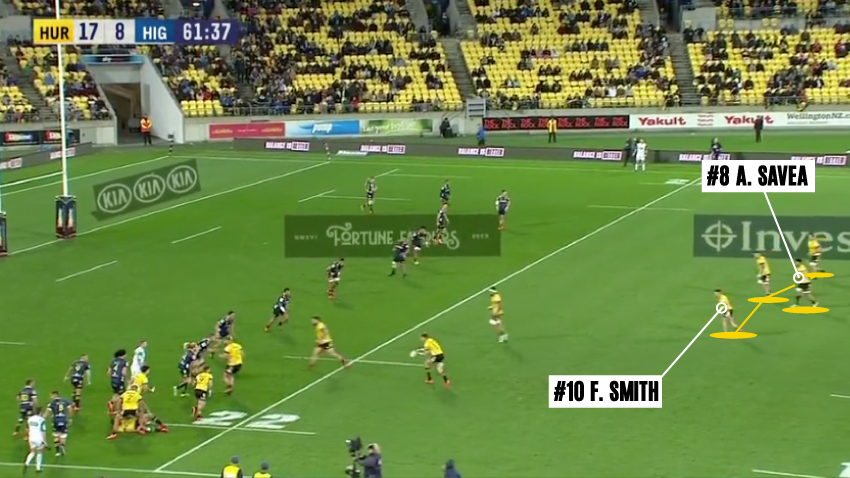 We can’t know how this would have worked out because Jordie Barrett fumbled the ball but if we scheme it out digitally, we can see the possible options. 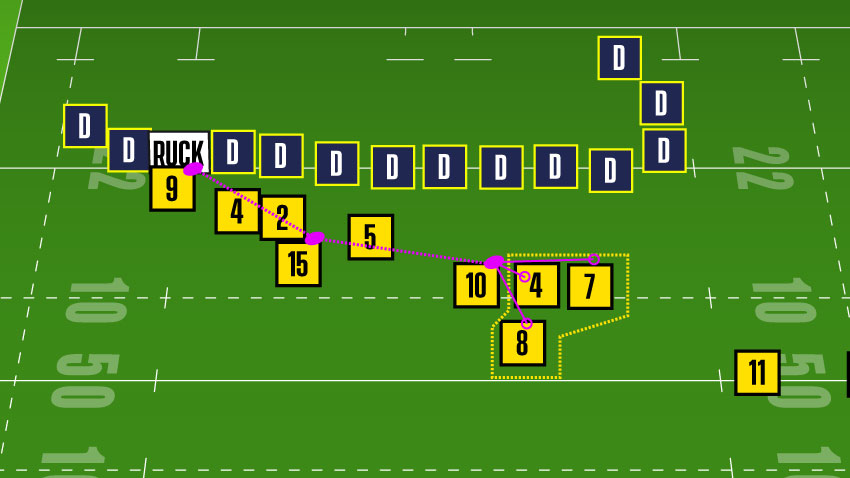 A pass from #15 to #10 would open up all four pod options – a carry from 10 between outside backs focused on forwards, a short pass to #4, a wide pass to #7 and an accurate pull back to #8, who has the pace and handles to carry through the screen or arc around it for a carry or a wider pass.

Jordie Barrett’s insane passing range opens up a tonne of options for the Canes when they use this structure. This example doesn’t have a back in the front line but it shows you what can happen when all parts of the 3+1 are likely options.

Barrett whips the ball to the outside forward – a lock – and he tries to swivel the ball to Laumape who’s sliding around on the arc. The Canes love this option, and the theory behind it is sound. If you can regularly hit the outside man on the pod, it creates viable options at the edge of the attacking line.

This action used Laumape as a decoy to suck in the outside defenders and create a walk-in try out wide. It didn’t work in this instance but you can see the potential progression. 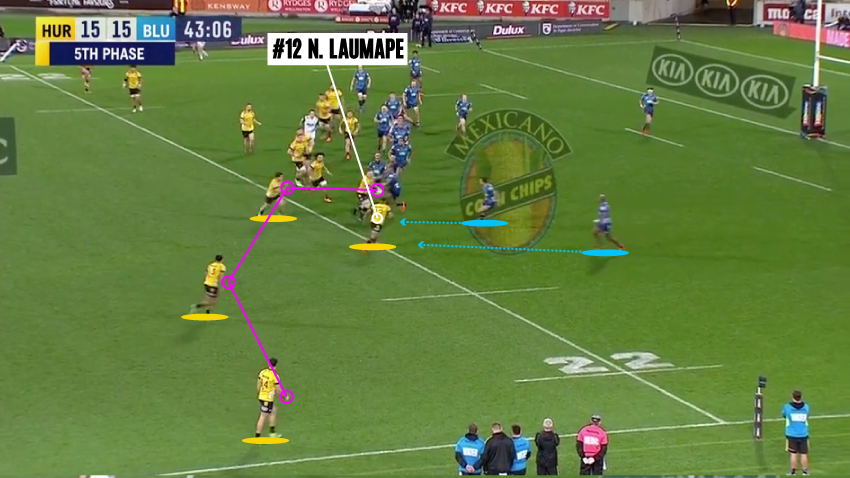 The Canes use this option a lot all over the field. Even when it doesn’t work it sets an expectation that every player in the 3+1 is a possible option.

It even offers an offload option to the pinch line option.

But that option is only opened up by a willingness to move the ball out of the screen regularly and from all positions. Those options really open up when you combine Laumape in the front line of a 3+1 with the winger Ben Lam sliding across as the +1 off a lineout.

The Blues completely lost Umaga-Jensen on this play but it followed the same patterns – a pod of 3+1 off a linking back with a pass to the third option on the screen. 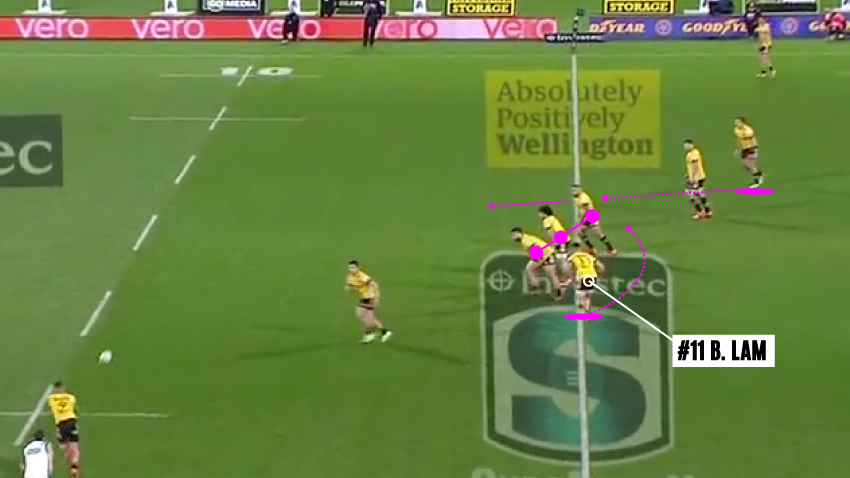 When you have this level of fluidity, you can begin to experiment with your positions. The Hurricanes have a wide range of +1 back options that they use regularly – Perenara, Bachop-Smith, Laumape, Lam, Aso, Umaga-Jensen and, most effectively, Jordie Barrett. I’ve shown how Barrett’s range – and his breaking threat – is used but their blindside winger Lam is regular presence as a +1 as he migrates across the pitch.

On this example, Lam slides onto the play as a +1 behind a wide strike pod here – almost like a midfielder – and that presence (1) compresses the defence on the threat of a pullback pass that they know the Hurricanes are capable of and (b) it allows allow Laumape to file out to the touchline where Kirifi can put him away with a super pass.

The logic holds all through the Canes phase play to balance out their attacking line by creating a consistent picture where they have physical threats in +1 positions while also giving Laumape/Savea/Kirifi/Coles/Aumua the kind of wide isolations that make them lethal attackers.

This works especially well when you have a lot of wide striking players like Savea, Kirifi, Coles, Aumua, Laumape, Barrett, Aso and Lam.

And while the components of the shapes themselves are relatively fluid, the Canes adherence to the shapes as an attacking shape is quite rigid. You will often see them arrange both pods well in advance of the ruck recycle and this is primarily because this is a #9 dominant structure.

When you’ve got a player – not just a scrumhalf – as good as TJ Perenara, you want to array the play in front of him when you can so he can make the calls. On this play, Perenara has five radiating options. 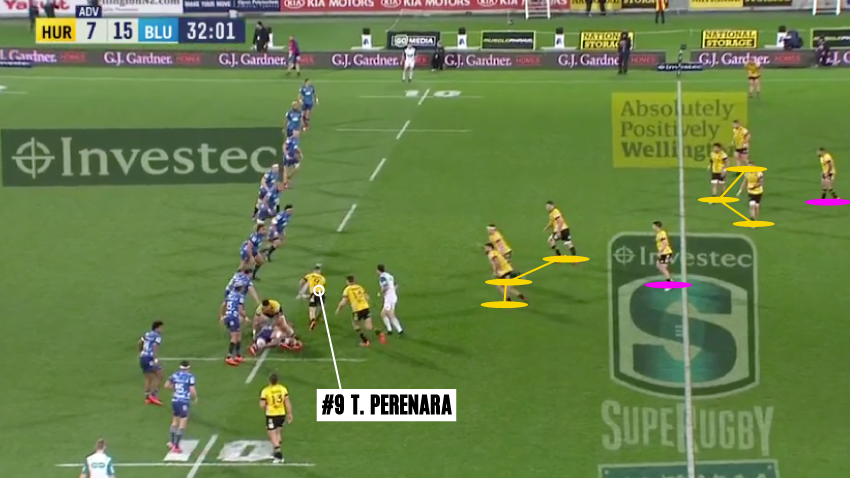 He can carry himself, he can hit any of the three forwards running in a narrow arrowhead or he can hit the wide pod by passing directly to the player standing in the +1 position. He takes comms when it’s on out wide, of course, but this scheme looks to me to be built around maximising what Perenara gives you as a complete half-back.

This system seems set up for a top-class, multi-talented halfback like TJ Perenara. It arrays pass options for him, it sets targets that he can easily break through the line to support and, with Barrett, it’s got the width to scale Perenara’s decision making and accuracy across the field.

It hasn’t fully clicked for the Hurricanes yet this season. With a trip to Christchurch on the horizon, they’ll be up against it but they have a system that can hurt the Crusaders if they can get their prime weapons out onto the pitch.