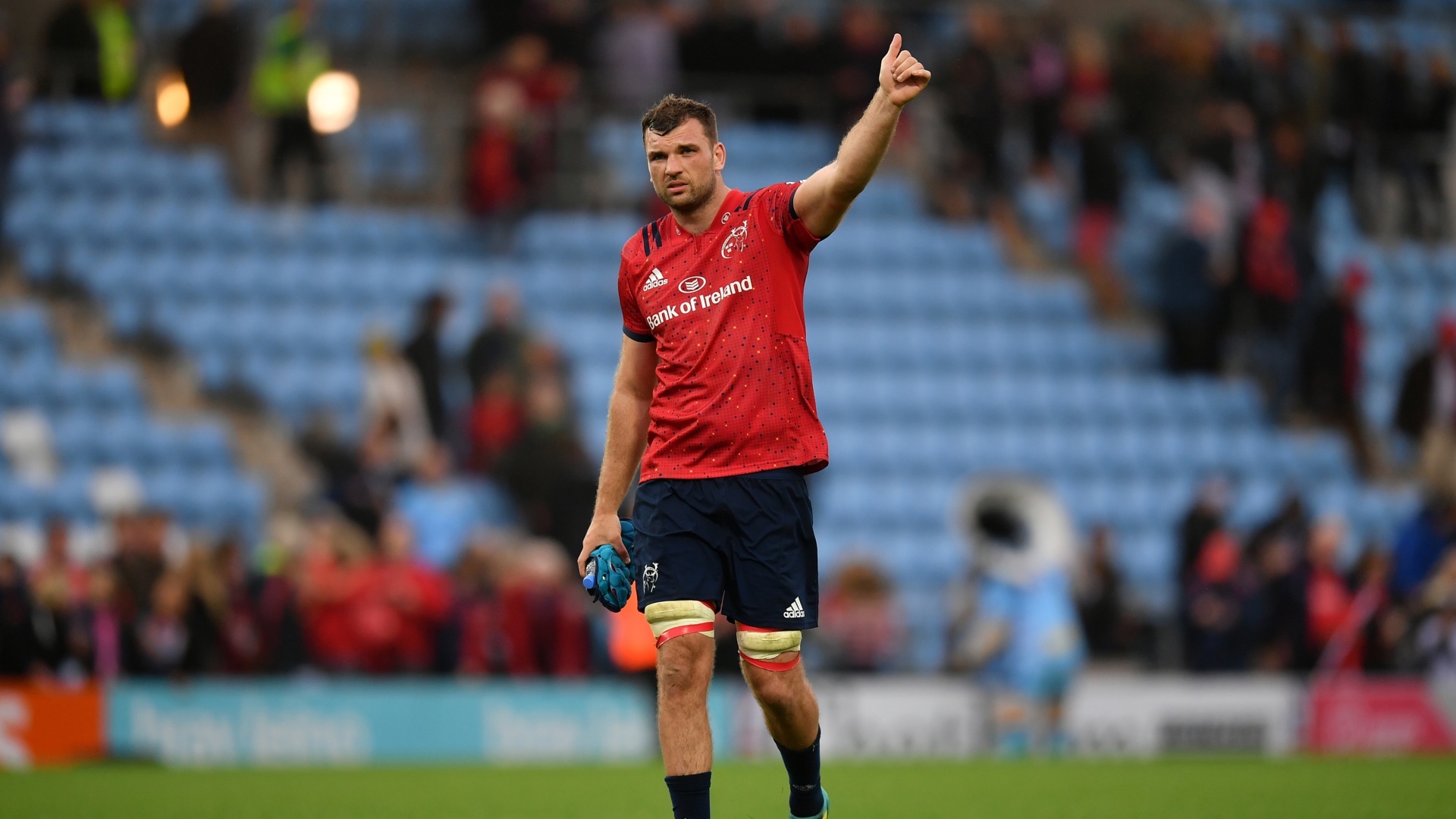 The future is important, now more than ever.

So for the last few days, I’ve been trying to imagine what I think Munster will be playing like next season (or whenever we start playing again). As I said in the previous article, a team like Munster doesn’t just sign players for no reason – anyone who is recruited is recruited to fill a specific role. With that in mind, how do RG Snyman, Damien De Allende and Matt Gallagher fit into what Munster are trying to do next season?

To get an idea of that we have visualise where we are weak now as a squad and how these players will look to address those areas of weakness.

This season has actually been incredibly useful in this regard because it has matched us up against two top-end sides (Racing 92/Saracens) and over the course of four games in this past season’s Champions Cup pool, they showed us where we were falling short at the highest level in fairly stark terms.

We’ll get to that in subsequent parts of this series but we’ve got to look at the prevailing trends in the game first to see what winning rugby at the top level looks like in 2020.

Over the last two years, I think winning sides have tended to do most of their work without the ball. Essentially you’re talking about giving up Possession as a percentage over the whole game and looking to maximise Territory as much as possible when you are mostly playing without the ball. That certainly was the case for South Africa in the World Cup who did most of their work without the ball over the course of the tournament. In the knockout phases of their run to the World Cup, the Springboks “lost” the possession battle in every game, including the final.

When we look at England and France from this year’s Six Nations – the two most consistently impressive sides in my opinion – we see these trends sticking pretty rigidly.

This is a picture of teams actively deciding to play most of the game without possession while trying to maximise where the game is played. When we look at England and France in particular, it feels like they are leaning much more on their defence than previous years and, once again, the numbers back this up when we look at total tackles made in the tournament to date. At the top, we can see Italy with 199 total tackles, which isn’t a surprise considering most teams expect to dominate possession against these teams but the next two teams are France with 196.8 total tackles and England with 193 total tackles. Break it down even further and you see England and France at the top of the dominant tackle charts with 26.8 and 23 dominant tackles respectively. Break it down again and you see England (1.3) and France (2.3) conceding the most amount of penalties for offside on average per game.

As my friend, Benedict Chanakira, pointed out to me this weekend, against heavyweight opposition “you essentially don’t want possession [because] he who has the ball has fear”. This is very true and the stats from this year’s Six Nations back it up repeatedly when we look at the top performers. 30% of all the tries scored in this year’s tournament came from possession transition events. When we break that down even further we see there’s a breakdown of 20% on counter-attack (kick transition) and 10% from turnover (breakdown and tackle steals).

When we get into the detail on kick transition we can see that a lot of teams are playing multiphase possessions on this phase of play. Most of the tries scored on counter-attack from kick transitions came from on the third or fourth phase so we can see the link between giving up phase possession in return for using returned kicks from the opponents as an attacking platform. When we see how often England used Tuilagi as a backfield counter-attacker and the number of metres Gregory Aldritt has a kick returning forward for France, we see how the kick return has been turned into another set-piece launch of sorts when utilised with high blitz defensive pressure and smart management of territory. Essentially, you force the opposition to burn phases in their half of the field, force a slow ball box kick that you can scheme for and then, if they kick the ball infield and you secure the ball, you can launch into a multiphase attack while the opponent resets.

On the other side of the transition equation, the breakdown or tackle turnover that leads to a try usually happens inside one phase of the turnover, which makes sense when you think about it because those moments normally happen when the offensive and defensive lines are quite close to each other i.e. if you lose the ball in a tackle, there’s very little defensive cover in the immediate vicinity if, for example, the opposition kick the ball through or take possession directly from you in contact.

This is all a side benefit from playing without the ball.

If pressurising the opponent high up the field produces kick transition events it also produces a large number of lineouts if the opposition kicks to exit off the field and, as we’d expect, the lineout is still the biggest source of tries scored going by the data of the recent Six Nations.

54% of all tries scored in this year’s tournament came from the lineout but the phase sequencing of those tries is quite interesting. 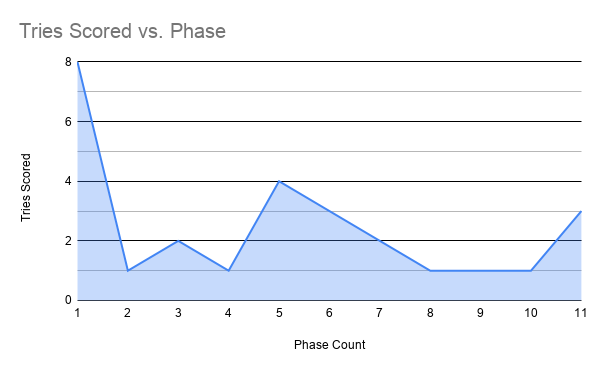 Most of the tries are scored off the first phase with a drop off thereafter until we reach the 5th phase of possession. What does this translate to? The latter phases correlate with closer field position earned from the previous phases – for example, a big hit up off the lineout followed by two effective carries that advances possession into the 22 where a try is then scored. Effective conversion of 22 entries into points (and tries in particular) is a hallmark of top-end sides in big games.

So What Does This Show Us?

Well, it mainly shows us the general trends of the last few years are tilting towards these key areas at the top level.

And I’d supplement these with

If I was to rank Munster so far this season against top-ranked opponents on these criteria, I think I’d be looking at something like this.

So fairly decent, in some ways, but struggling against the very best teams. When I went back and watched our four games against Saracens and Racing – we won only one of those games, remember – there were a few issues that consistently showed up for me when I considered these five points.

It feels strange to criticise Munster’s defence when were currently have the best defence in the PRO14 from a try conceded perspective.

Over the 13 rounds to date, we conceded an average of 1.61 tries per game in that competition.

When we isolate the four games against Racing 92 and Saracens, we conceded 2.25 tries per game. Yes, there’s a noted step up in level from most of the PRO14 games we played this season to Racing 92 and Saracens but when we look at certain phases of possession we allowed our defensive line to get unbalanced when we lost ground up the middle and, more often on the edges of the defensive line.

If we want to be able to keep a 3/4 man backfield – with Murray cycling into the line in the wide areas – to maximise our returns from kickbacks, we have to be rock solid in our contact work centrally and on the edge when we’re defending with 11/12 defenders in the primary line.

We’ll need to have the size to make dominant one man stops and use our talented jackals to slow the opponent’s progress across the field and encourage slow kickbacks.

Against Racing and Sarries, we found it difficult to get dominant stops centrally when we achieved a bit of defensive territory. If you don’t want to play dumbass rugby i.e. trying to play out of your own 22, you have to be able to contain the opposition when you box kick to pressure.

We don’t have these problems against teams that we have a dominant physical advantage over but that isn’t the case when we’ve got to the semi-final stage of Europe and played physically massive sides like Saracens and Racing 92.

That pressure on the edges will bring our jackals into the game more. This is defending territory, rather than defending reactively. This is using defence as an expression of territorial superiority and as a mean to generate the possession you do want – lineout/scrum attack and transition phase play.

When we get that part of our game shored up against the very best sides, we’ll already be most of the way there.

In the next part in this series, I’ll cover the other four trends and name my ideal Munster matchday squad for the coming season to address what I feel are our shortcomings in these areas for Cat 1, 2 and 3 games.