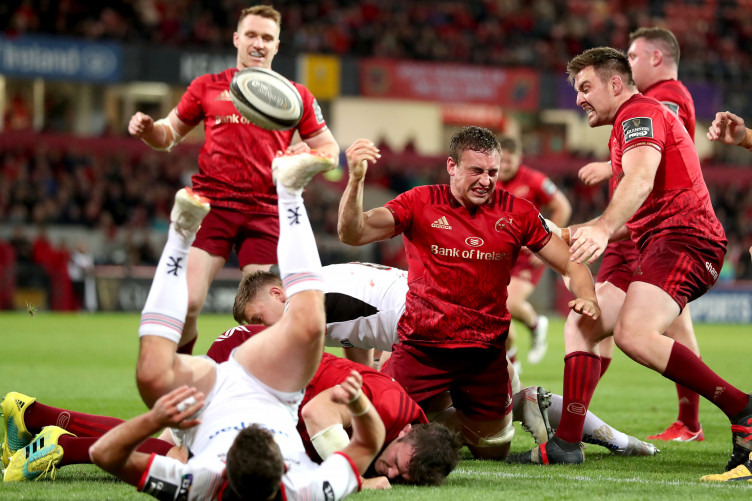 There was quite a lot to unpack from Munster’s work against Ulster on Saturday.

There was a lot of excellent attacking structure that was impressive as it could be arrayed against an Ulster side that were losing collisions and giving up transition opportunities left, right and centre – quite literally.

I’ll get to that structure tomorrow but for now, I wanted to focus on an area of this game that pissed me right off in the Arms Park – Munster’s maul.

Munster’s maul defence was quite good, as it usually is, but our builds in attack weren’t nearly as effective as we probably would have planned and that was a lot of the reason why we failed to put Cardiff under the kind of pressure we needed to.

Ulster were a different story.

First, let’s look at the maul defence because it gives you a good idea of where a team is at technically as well as physically.

This is the pivot kill.

At this stage, Ulster still had Iain Henderson on the field so Munster would have been very wary of the power he can bring at all stages of the maul – as the catcher, lifter, or as a first/second layer driver. Munster had a slight nibble at this one with Beirne going into the air and being lifted by O’Mahony with Holland bailing out of that lift to man the landing point defence.

From here, Munster went about pivoting Ulster’s maul to expose the front to a “kill shot” from O’Mahony. 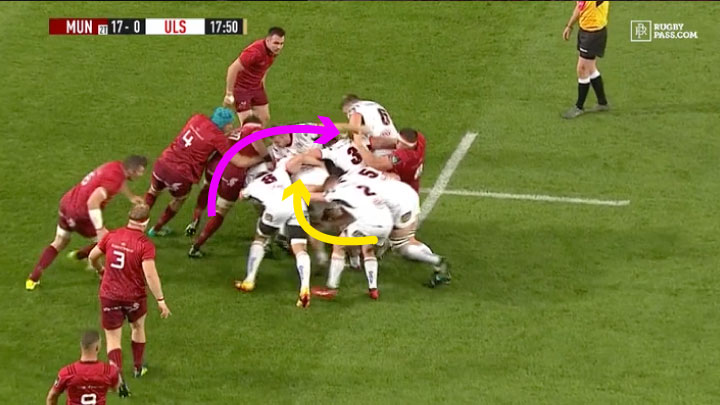 Beirne and Holland rotate around the touchline side of the initial build while Kilcoyne and Stander shear the infield side away. That exposes Deysel and McBurney to O’Mahony, who can enter in from the front and catch Deysel at a weak body angle; side on. 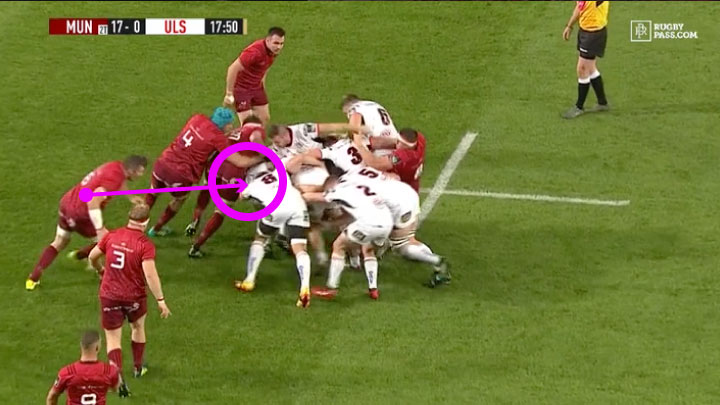 O’Mahony spears straight into the heart of the Ulster maul and kills it stone dead. This was a 5 on 8 win for Munster and really set the tone for what was to come a few minutes later on a different side of the throw.

Munster have a bite at a counter-jump with Holland being lifted by Beirne and Stander but Holland gets trapped on the other side. He gets a bit of leeway from the ref but for me, he gets a real helping hand from Alan O’Connor, who expended a lot of effort to keep Holland trapped on the wrong side of the maul. 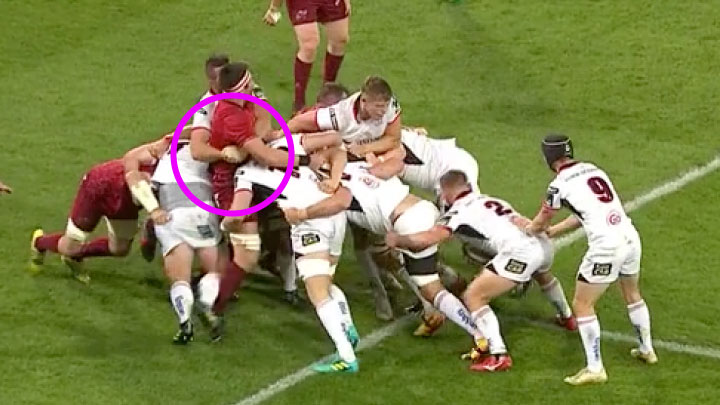 That’s a gable grip he’s got under Holland’s ribs so Billy ‘ain’t going anywhere there. But this is actually helping Munster. The grip is plainly obvious to the touch judge and referee, so Holland won’t get penalised – he literally can’t move away.

In trying to trap Holland, O’Connor is killing his side of the maul for Ulster and allowing O’Mahony and Beirne to mill them back. By standing upright with Holland, O’Connor isn’t adding to the shove and is actually isolating the Ulster player ahead of him and behind him. 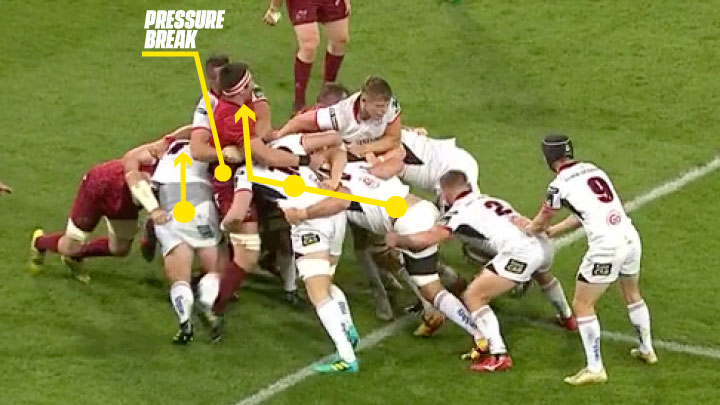 Holland and O’Connor are spoiling the push of Henderson and Deysel behind him – who have good body positions – and he’s isolating McCall at the front for O’Mahony to attack at a strong angle advantage.

Look at that shove through McCall and O’Connor from O’Mahony and Beirne. When you’re standing, you’re not helping the push. That initial shove saps all the momentum away from Ulster and effectively makes this a 4 on 8 win for Munster, even though Holland is not free of the maul.

This final defensive example isn’t so much maul defence as it is lineout defence but I wanted to include it anyway. Ulster had a 5m lineout drive opportunity and needed something pretty badly from this set.

If you’re Peter O’Mahony watching this Ulster alignment, what are you thinking? 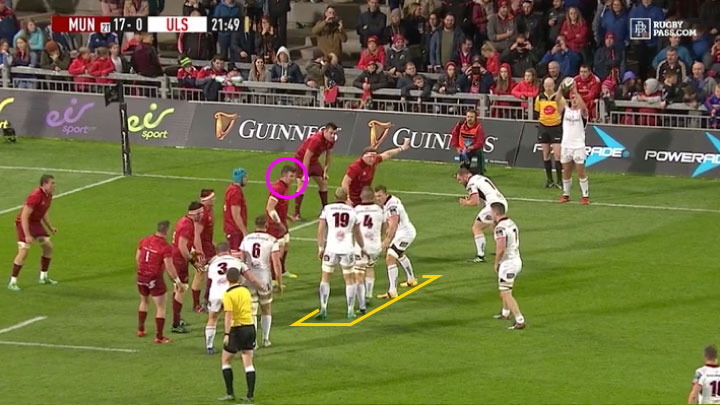 Does it look like a lift pod with O’Connor jumping? It sure does to me. Just look at the isolation between the back pod of two – an unlikely option – the front lifter and Timoney as a heavy receiver; the spacing means that it can only be going to one of these three players with O’Connor as the likely option given Ulster’s reliance on him as a target in plays like these.

In lining up like this, Ulster made it a race into the air with either Tadhg Beirne or Peter O’Mahony. Bad idea.

Look at the acceleration Beirne gets on that jump lift from Stander and O’Mahony. He easily beats O’Connor to the point of the ball even though the Ulster captain had a half-second head start.

There’s a little too much animation ahead of O’Connor’s jump for my liking. O’Mahony can sink into the lift at the same time as O’Connor comes off his initial hop.

Beirne gets a strong right hand in to disrupt O’Connor from ahead of the jump and has the power to dislodge the ball for a Munster turnover.

The real money was on the other side of the throw. Munster went 100% on all 10 of our lineouts and not one of them lead to scrappy possession. That kind of reliability builds pressure on the opposition and generally gives you good front foot possession to manipulate the opposition with.

Our builds were much sharper than they were in Cardiff a week prior but we were certainly helped by some average Ulster lineout defence.

Munster, on the other hand, have already constructed the second and third layer of the maul before Beirne has even hit the deck.

Watch O’Mahony and Holland separate themselves from the line with a full jump feint (O’Mahony) and a lift feint (Holland) with O’Donnell stepping in.

From here, Ulster are in trouble. 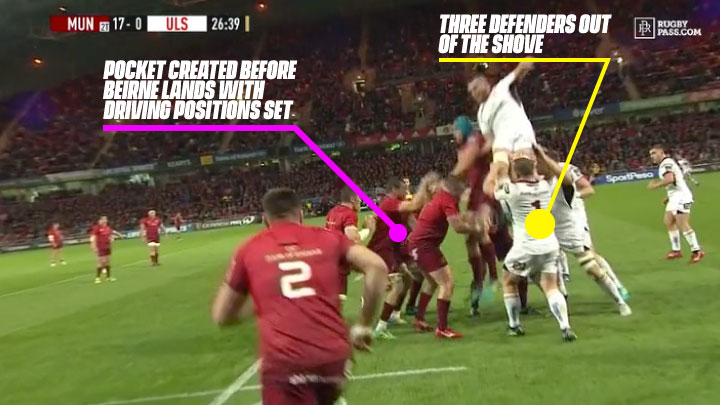 Munster get the ball down clean, get a drive set almost as soon as Beirne drops and they drive right into the space disrupted by O’Connor’s jump. O’Connor falls under the Munster maul, bringing it down and earning Munster a handy penalty.

O’Connor’s slip was the key moment in this penalty but our set up was really good on a seven-man build. Beirne’s body position was excellent – low and angled into the defender to give us something to shove into. 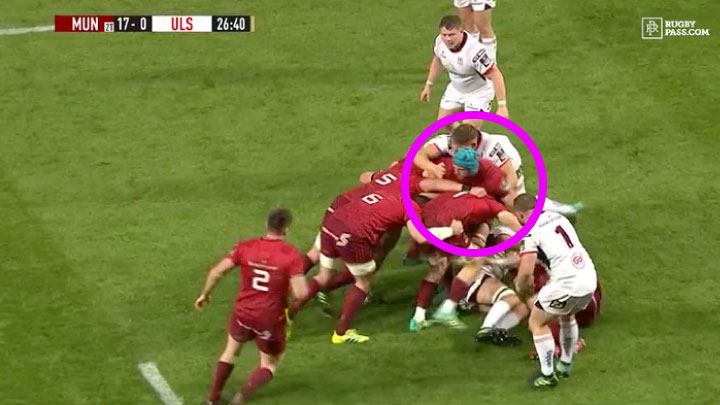 He’s really making the defender feel the full transfer of weight. Our build here was a wide 3-3-1 with O’Mahony floating between the first and second layer depending on the picture developing in front of him. 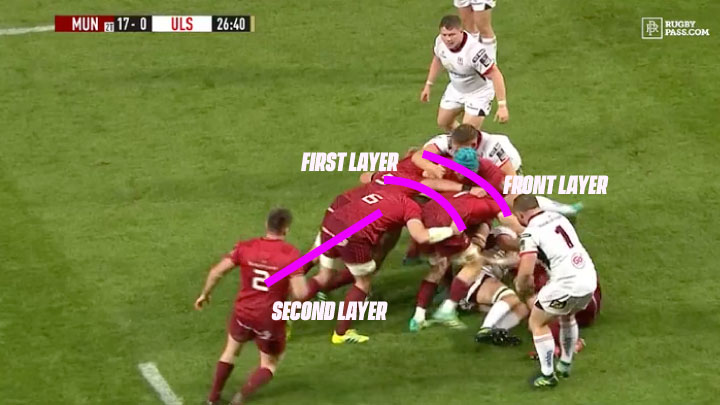 This “Stingray” shaped maul is really good when you’re looking the overpower a team right through the middle without a full set of numbers in the lineout, especially when you think they have a tendency to counter-jump. It gives you a wide power section and can replace parts quickly – see how O’Donnell slotted into Archer’s role seamlessly for an example of that – and it also gives you a lot of pivot mobility. That is, you can choose to break to the left or right depending on the pressure the opposition is giving you. It’s different from the Long Maul – which I’ve covered before quite a bit – and we used that later in the game to great effect.

A few minutes later, Munster had another maul opportunity. It wasn’t successful ultimately but it did show the kind of technical improvement I was looking for, right up until the end.

Let’s have a look at the component parts here. 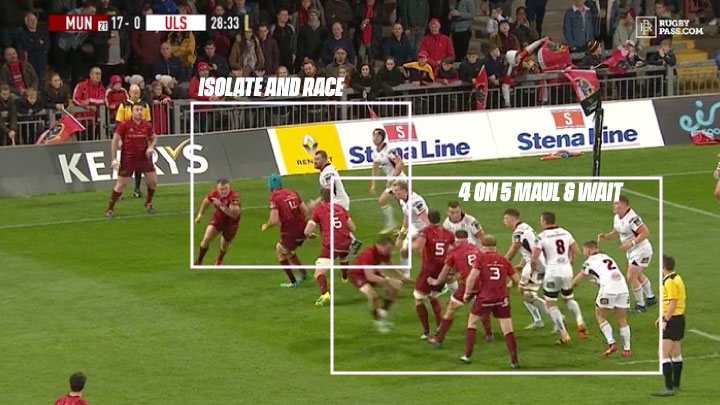 O’Mahony, Beirne and Kilcoyne run a decoy feint at the front to draw defenders to the front of the lineout. On their decoy run, they want to drag a pod to the front, isolate them and then race them to the back of the lineout where the maul is forming.

Back there, Munster have a four-man pod which will set up on five Ulster defenders and wait for the impact of Kilcoyne, Beirne and O’Mahony as they peel around from the front. 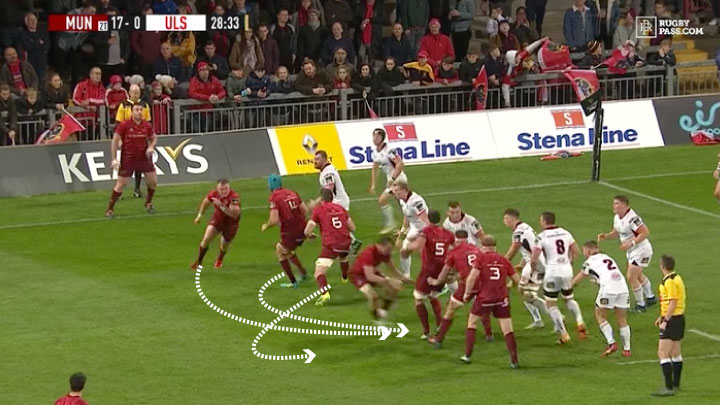 Our build at the tail of the lineout was designed to give us as many options as possible depending on Ulster’s response. You can see that by breaking down our build. 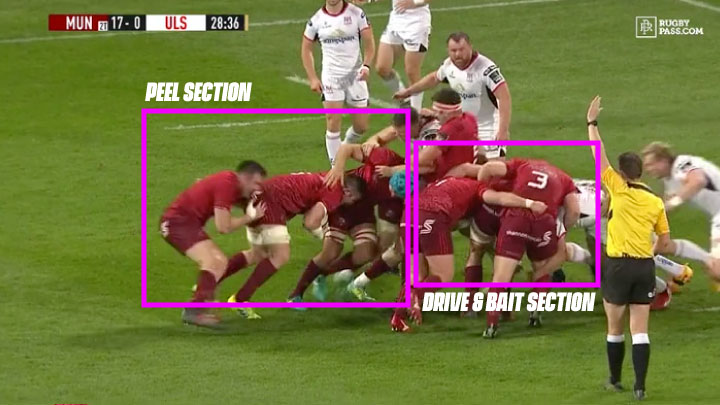 The drive & bait section will either drive through on the initial Ulster defence which will allow Beirne, O’Mahony and Scannell to peel off to the infield side, or it’ll draw a massive over-push from Ulster which will let our Peel Section attack the touchline side. 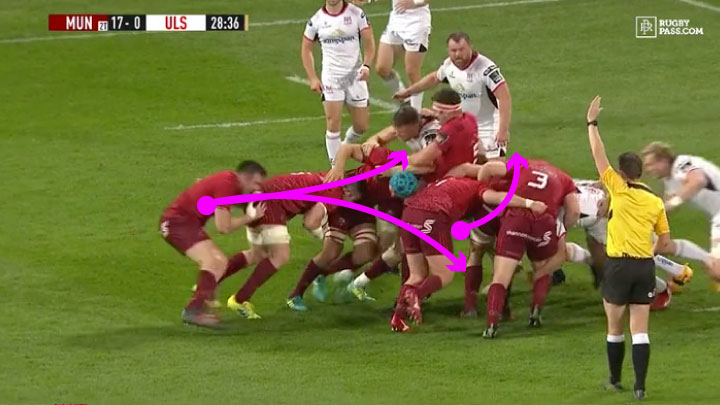 We ended up getting sacked on this maul because we didn’t protect the touchline side well enough to stop the Ulster defender from coming over the top and affecting our ability to peel. You can see O’Donnell falling at the end of the GIF, and that lack of balance on Holland’s touchline side added to the imbalance.

We drew Ulster around the infield side and tried to peel away in the other direction. Look at Mathewson driving Scannell and Archer, in particular, to complete the pivot and hold the edge.

If Archer can hold out McBurney here, Munster would get a shot at drilling through Ulster’s last bit of resistance… 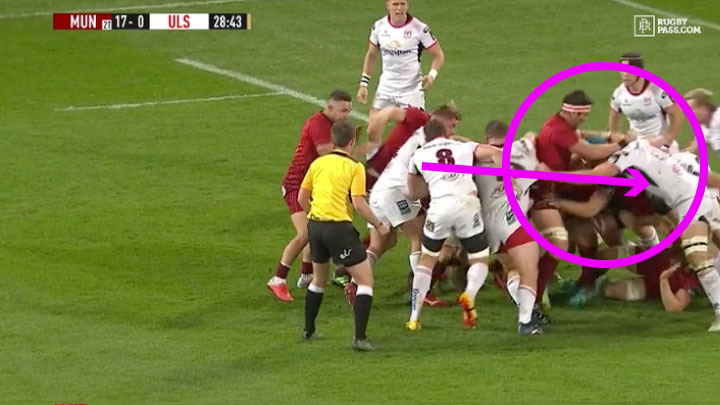 … but we have to break from the back under pressure and give up a scrum turnover.

We went with Beirne at the front and used O’Mahony and Holland as a decoy in the middle. Watch how O’Mahony’s initial bind on Holland and then his step back draws O’Connor away from his lift on Treadwell and gives us clean possession.

Do you see us building the same two sections as the previous maul?

Watch what happens this time with Kilcoyne and O’Donnell shoring up the touchline side.

Ulster go strong on the infield side – as they tend to do and as predicted – they lose three defenders and Munster can peel off on the other side with a massive numbers advantage. Watch how Beirne keeps his shape and turns to pivot the maul, protecting the build as it turns around him.

Ulster have no answer to it and it’s the third try for Munster.

Our maul will have to be in good shape coming up against Leinster and especially Exeter but on this evidence, we’re starting to get to where we need to be.