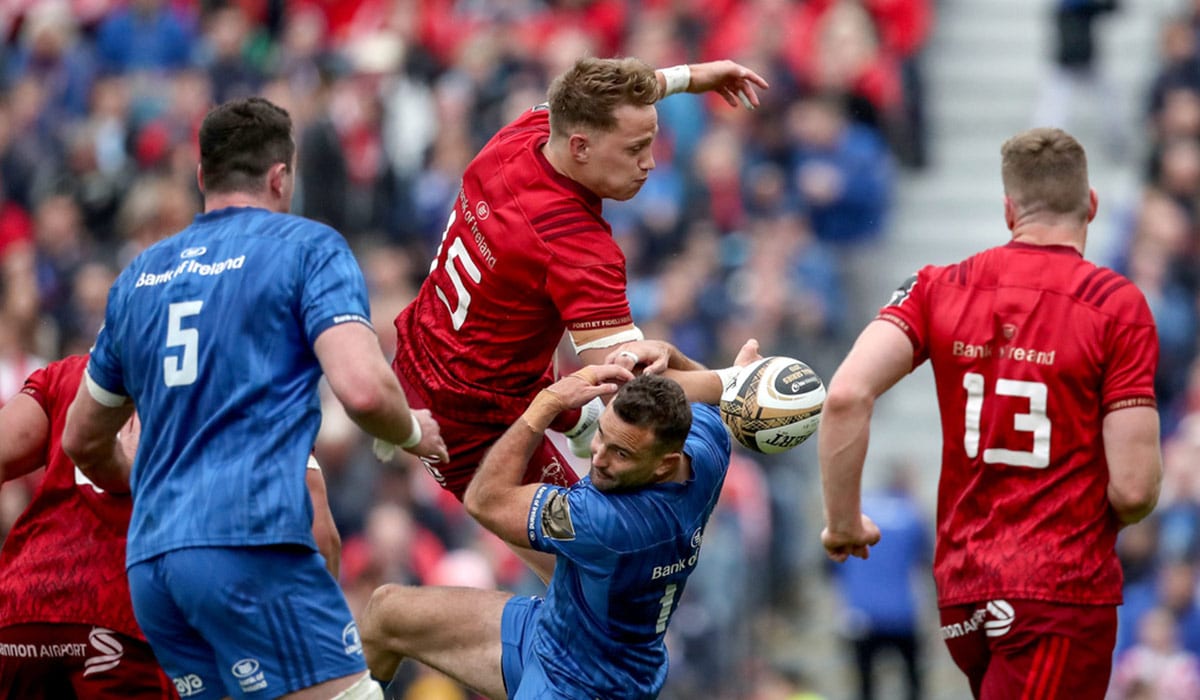 So it’s all over.

Munster stumbled at the same hurdle as last season, albeit one of the highest hurdles in the game; beating Leinster in the RDS in 2019. From a purely results POV, Munster have not progressed beyond the level of 2018/2019 – that of a semi-final in Europe and the PRO14 – and despite how reductive that is, it’s a stark enough level check. Semi-finalists last year, semi-finalists this year. Despite the improvements from last season, and there have been improvements, we still look like a car trying to get to 100kph in second gear against the best of the best.

The margins are small enough, I truly believe that, but those small margins are the toughest ones to overcome.

If Munster were failing to get out of Champion’s Cup pools, or PRO14 playoffs, the margins would be much bigger and, as a result, easier to make gains on. The problems in that scenario would be “obvious” – relatively speaking – and it wouldn’t take much to get a turnaround in performance with a clean slate. When you know what you need to do, the job is much easier, even if it’s a big job.

When it comes to pushing Munster’s attack to the next level, I don’t think a radical overhaul is needed to get the gains we want. As with most things in this game, it’s the small things that we need to tighten up on.

Let’s have a look at these two phases of attack from Leinster as an example;

This is one of their twelve clean breaks in this game. How did it happen? Let’s take a look at the build-up off nine on both phases.

On the first phase, we can see that Byrne has a multitude of options to work with. He can carry himself, hit Van Der Flier, throw into the second layer to Henshaw or swivel the ball inside to Ryan.

Each option has varying degrees of difficulty but all four primary options and the two easiest branching options are easily achieved. 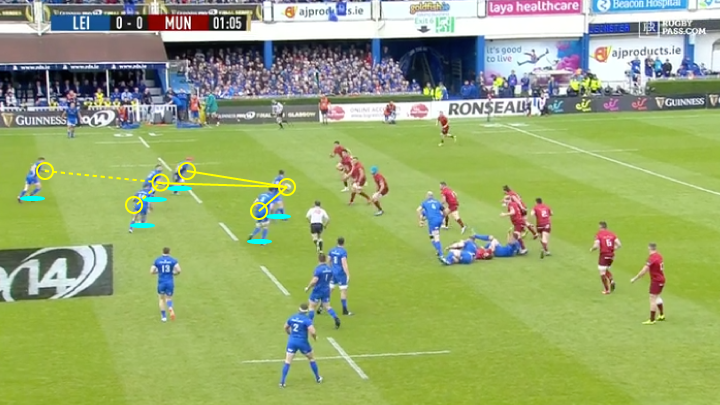 From there, Henshaw has two radial options – in broken line – where he can pass to Larmour on his outside shoulder or to Kearney on his inside shoulder. Every single option is a live problem for the Munster defence because Byrne can realistically decide to hit any of them he wants.

For me, the key guys in this instance are James Ryan and Dave Kearney. 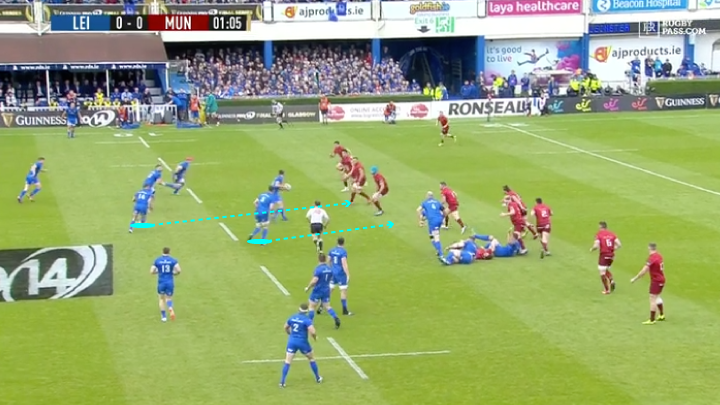 They are running “pin/support” lines, that hold the attention of the floating Munster defence as well as providing heavy ruck support options on the crash in Ryan’s case. If they weren’t there as live passing options – either off Byrne or Henshaw – then Munster’s defence could be much more aggressive in taking the space Byrne is looking to play into.

If even just Ryan was removed from the play – as below – then Munster have a way easier job of defending this. 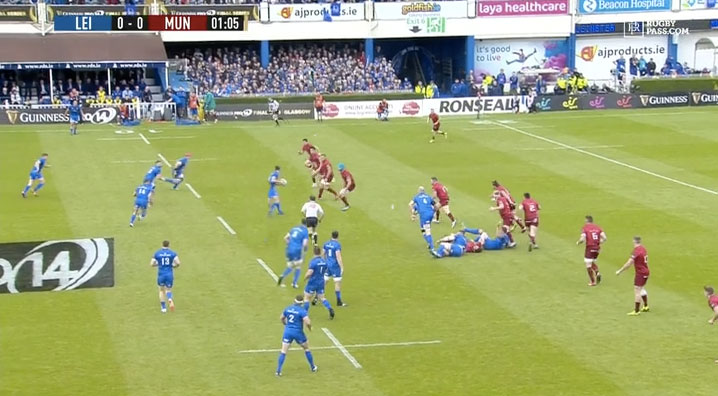 With no inside ball to worry about – a low percentage play, admittedly – Munster can look to take this space more aggressively and, crucially, dominate the next phase by attacking the breakdown. Leinster use Ryan’s position to pin defenders, yes, but mostly to win the breakdown without drawing backs in.

If Ryan isn’t present, Munster can look to dominate this space, swamp the breakdown and get the likes of Henshaw tangling with Beirne on a cleanout 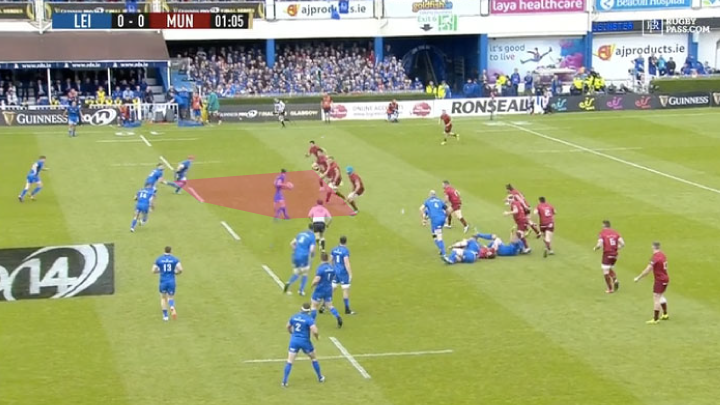 Essentially, Kearney and Ryan give the combined impression of two possible sides of attack. Without them offering that central or against the grain line, Munster could push up and out to snuff out Leinster’s carry, attack their breakdown or harry them into touch. 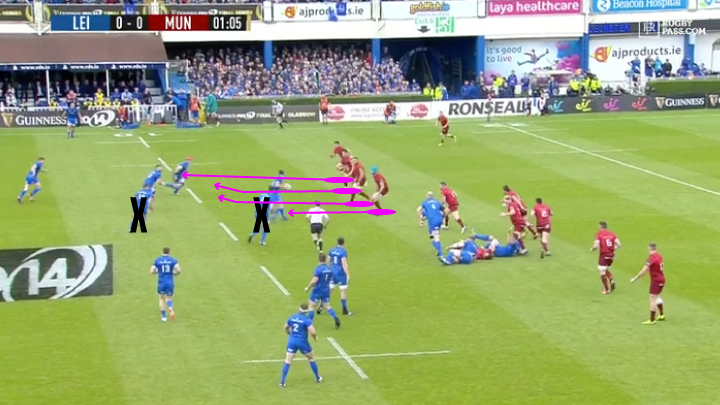 But that isn’t what happens.

Byrne hits Van Der Flier on the outside but he loses gainline to Stander and Murray.

Ryan is in position to dominantly secure the breakdown on his own after Beirne draws in, leaving Leinster with good offensive numbers on the next phase. No backs were lost supporting Van Der Flier’s ruck, so they are free to hit the wide channels on the next phase. 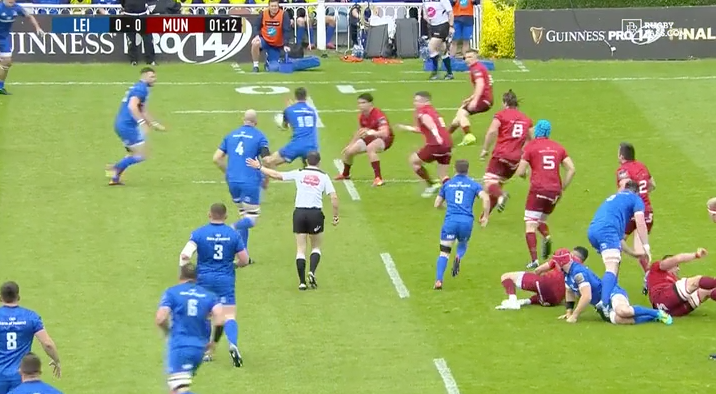 McGrath’s pass to Byrne goes right past the C defender (Kilcoyne) and, with Henshaw on his shoulder, Carbery has to sit down on the edge of the defensive line as Kilcoyne has been passed around. Byrne can hit the wide pod of three backs – Larmour, Lowe and Kearney – on an isolation on Conway. Only an excellent shot from Haley on Lowe kills this move but it was created by Leinster’s use of viable options.

Here’s another example of inaccuracy from Munster later in the half.

This is off a scrum set piece, so all of the

It’s a decent carry from Scannell in the end, for sure, and it sets up a decent opportunity in the next phase. But.

I don’t like Conway’s line off Carbery. He’s there to act as an option, right? With Farrell weaving inside to stagger McGrath’s tracking line, I’d like Conway to tailor his run with Carbery to keep himself alive on this, right until the ball heads out to Scannell. Maybe if Conway can be a possible pass option, we can hold Henshaw in place for a heartbeat longer so that he can’t get a clean hand to Scannell after Ringrose shoots up. If Farrell is taking himself out of this phase to hold the inside defenders, I’d like Conway to help us to help Scannell make an easier carry.

Conway’s predetermined support line doesn’t allow any tracking with Carbery’s movements because he’s never intended to be a live option on this play. He’s running a “dead” line – there because the scheme depends on it, not because he’s an option.

The pass from Carbery is good, but if you’re a Leinster defender, are you worried about Andrew Conway as an option here? 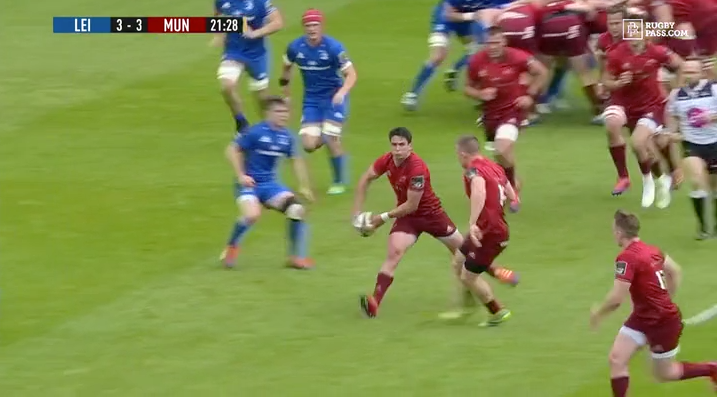 He’s practically running on top of Carbery, so no, I wouldn’t think they are. He’s running a pre-prescribed line but he’s not adjusting to the play as it develops. In my opinion, even tracking a little wider to mirror Carbery’s line would sell to Byrne/Henshaw that a pop pass off the shoulder is likely.

Instead, Scannell does well to get around Ringrose but gets snagged by Henshaw. Had Henshaw been staggered ever so slightly in an attempt a wider defend Conway’s line, maybe he and Byrne could have been here instead of here.

One ends in a linebreak for Munster – in my opinion – and the other ends in a good tackle from a good defender in Robbie Henshaw.

This isn’t even the biggest issue I have here.

What happens in the next phase?

Joey Carbery gets blitzed by Garry Ringrose – but how did that happen?

Our pin runner – Arno Botha – is ahead of Joey Carbery so he can’t be passed to. 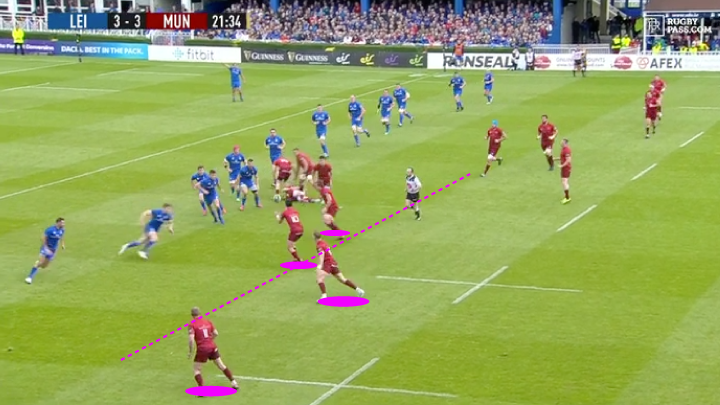 That gives Kearney and especially Ringrose license to shoot hard on Carbery because he doesn’t have a legitimate passing option on his inside. He can only pass it wide or try to attack the line himself but without the inside shoulder option, the play is only going one way. Munster have an isolation here but we can’t take advantage because we don’t have a pinning option on the inside shoulder.

Botha isn’t looking to line himself up with Carbery as he comes around on second phase – he’s looking at the ruck the entire time. 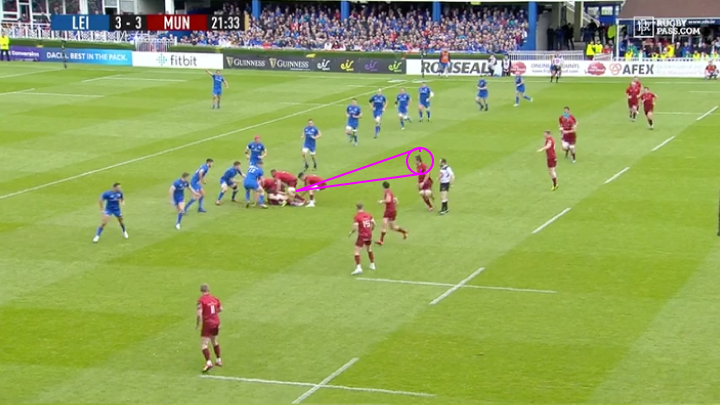 Even if he’s due to take the ball here, it is worth the effort to align yourself with the first receiver to at least be flat with him.

Ringrose blitzes up, takes the chance and comes out on top.

This is one incident, but it has roots everywhere. When we got turned over before half time in the build-up to Leinster’s third penalty, what happened?

We have a pin runner, right?

We do – even if it is an outside back – but we have no one to pin him if he ends up getting used as an option. At this point, Leinster have just started to blitz up on our structures and it’s really stressing us.

Out forwards are getting up off the ground from the previous ruck so we have no outside shoulder ruck support and get turned over. This one is on Carbery, for me. He should have taken contact himself, rather than hit a pass to Haley that wasn’t really on and then try to take out Healy straight on.

Look at the first Leinster example; 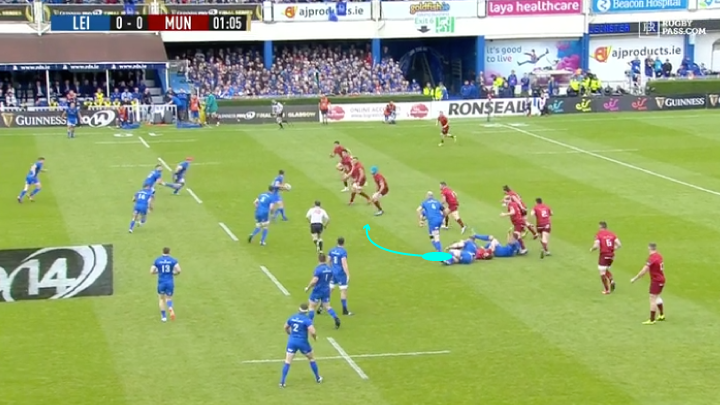 Toner is on his feet and ready to support any inside option. That, coupled with a general regression in our breakdown work as the season has gone on, is part of the reason why we couldn’t make our possession count against Leinster in my opinion.

Our lines were a little off and our options weren’t as sharp or as well supported as they might have been.

Little things like that are where our marginal gains will have to come from.