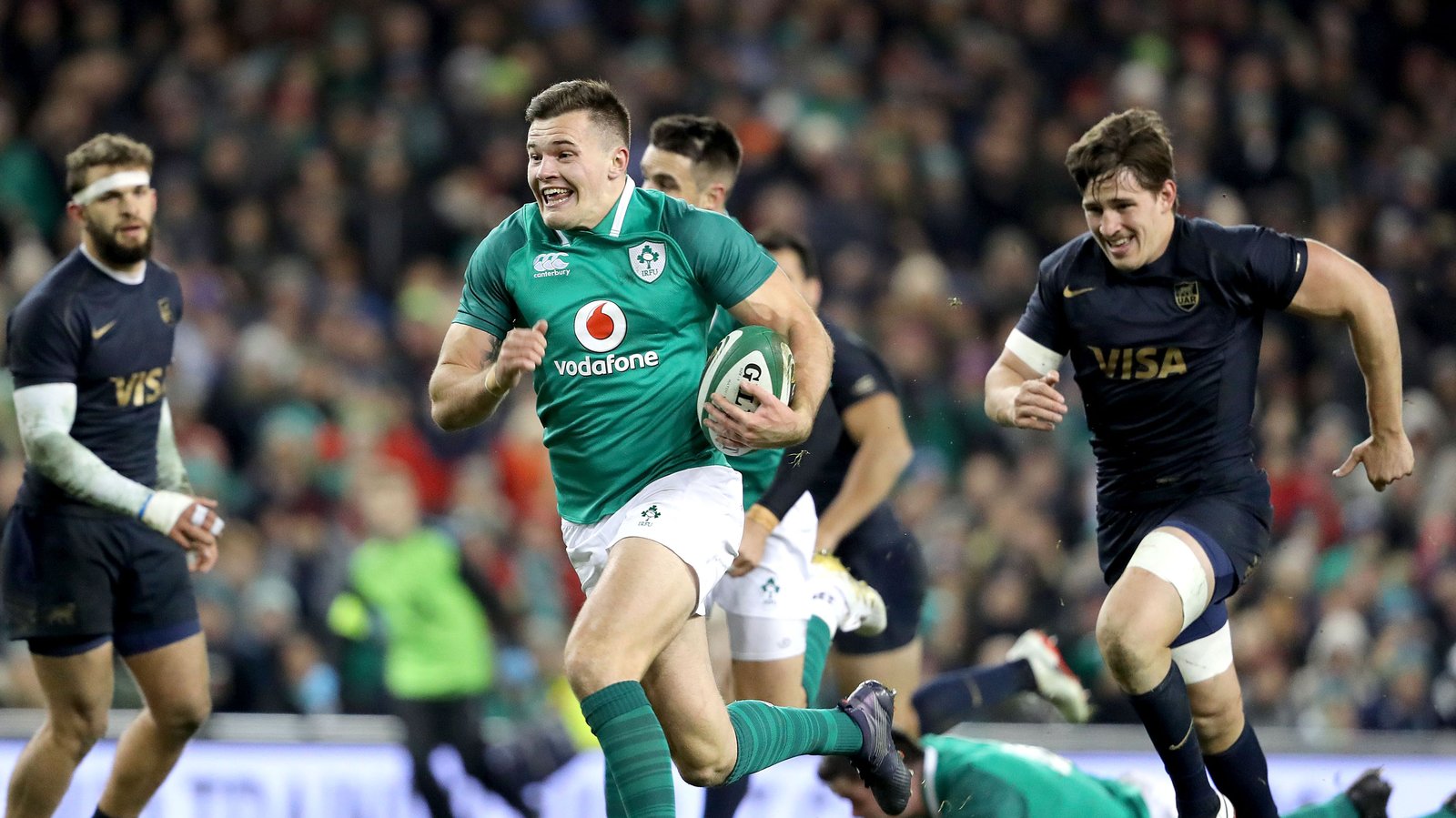 In this Six Nations feature for TRK Premium subscribers (like you, you beaut), I’m going to try and get into the head of Joe Schmidt ahead of his team selection and give you an idea of what I think Joe will be thinking, and why.

I’m a pretty big Joe Schmidt fan. I’ll be straight up about it and just say that his methods tickle my inner rugby dictator in all the right places. Multi-phase roles and ruck detail? Precise kicking patterns?  Set-piece strike plays? His scientific approach to the game will be the future of coaching in this game and, when it’s all said and done, I think Joe Schmidt will go down as one of the greats of the game.

His results do the talking as far as I’m concerned. Beating the All Blacks? Beating South Africa in South Africa? Winning two Six Nations titles? Ending Englands two campaign unbeaten roll last season? The only thing missing from Schmidt’s hit list is a World Cup Semi-Final and a Grand Slam. If he gets both, any lingering arguments that Schmidt isn’t the best Irish coach of all time become trivialities. You don’t have to like him – and God knows, many don’t – but you have to recognise that what he’s doing with Ireland in 2018 will be the template that everyone will follow in years to come.

With that out of the way, let’s try to delve into Joe’s head for the unique challenge that is this French outfit.

First things first – there isn’t much analysis to be done on this French side. To analyze a side, you have to look for familiar patterns, player combinations and ways that both of these things might be exploited, especially at test level. France don’t have those patterns right now because they simply haven’t had the collective time together to do so.

In a way, we’ll have to revert to the things that “We Know” about France, which isn’t ideal but it’s the kind of broad-spectrum analysis that we have to do in this situation.

We know that they’ll have a big scrum and a big maul. We know that they’ll be vulnerable to the same cardio issues that their Top14 sides have. We know that they have a tonne of injuries and a brand new head coach being parachuted in pre-tournament with little time to impose any structure on their game. We also know that this is exactly the time when France are likely to be most dangerous. This is still France, in Paris, and on the opening day of the Six Nations.

So what do we do?

We approach this game in the same way we did against South Africa in November. As a base template, the way Ireland played in that fixture in November is a great matchup for whatever team France select.

Here’s who I think Joe Schmidt will pick to do the job in the backs – and why.

Rob Kearney isn’t the future of the green 15 jersey but for right now I think he’s the best option – especially for this game. My position on Rob Kearney has probably been the most controversial aspect of TRK in the last six months (Grobler stuff included) but my reasoning behind his inclusion is that he gives you the kind of reliability you want in a fullback. He’s not as good as he was in, say, 2009 but he still brings most of the things you’d want from your fullback in a tight test match. He’s good under the high ball. He takes solid options on kick return. He’s good positionally. He exits well. He’ll hit the line and present it back almost every single time. That’s before you get to the X-factor stuff you won’t see on Youtube sizzle reels – he’s a good defensive organiser, he’s a leader, he knows what Joe Schmidt expects of him (and others) and he’s experienced. He’s a guy you can put at 15 and not worry about it, especially on a wet day in the Stade de France in the opening game of the championship.

Those things still matter at all levels of the game, especially at test level.

One of the recurring themes I hear from people is that Rob Kearney “can’t tackle”. Fullbacks miss tackles, lads. Loads of them. It comes with the position in the modern game. Go through the lists of all the current test fullbacks and you’ll find missed tackles ranging on the scale of “just missed” to “ah here”. There are two types of fullbacks – those that are there to miss the tackle in the first place, and those that aren’t. Don’t confuse the latter for being better defenders than the former.

Larmour is the coming man in the position (with Conway/Carbery in the conversation) but Kearney is the man for the gig this time out.

The form wing in Europe will start in Paris barring injury and it’s not even close. If there’s one guy who I’d back to make a big impact against the French side that I see Brunel selecting, it’s Keith Earls. His defensive positioning, high ball work and attacking agility is top level at the moment. He’s started a lot as blindside winger (#11) for Schmidt but I think his defensive IQ will see him at #14 for this game.

I think Henshaw is the ideal outside centre in Schmidt’s system. It’s just that, until now, I don’t think Schmidt has been able to pair him with the right guy to facilitate it. Jared Payne has the defensive positioning (if not the physicality that Schmidt likes), he has the passing, but he doesn’t have the strike running in wide areas that Henshaw does. Ringrose is close but I think he’s missing the heavy leather that a top, test level #13 has to have in 2018. Both Payne and Ringrose are injured anyway so that means that Henshaw starts at #13 for me.

He’s got the strike running, the handling, the defensive awareness and the work rate to slot in perfectly here.

Blend-wise, that’ll be made possible by…

Bundee gives Schmidt the perfect option at 12 to allow Henshaw move further out. Aki has all of Henshaw’s physicality in the carry and in defence but, in my opinion, a better range of passing – be it offloading, short pops, pull back passes or medium/long range shots off both sides. Getting Aki inside Henshaw and outside Sexton (spoiler alert) is Schmidt’s ideal midfield layout right now as far as I can see.

Longterm, I can see Stockdale migrating out to the #14 shirt and being used in a very similar way to Andrew Trimble was but as far as this game goes, I see the Lisburn Yeti slotting in at #11. From a set piece POV, Stockdale is an immensely valuable tool as blindside winger where his power and pace acts as a holding agent against a French defensive unit that will be focused on physical threats in the narrow channels.

I don’t need to write much here. Sexton is one of the first names on the teamsheet. He’s going to be targeted for his usual treatment in Paris so I’d be hopeful that some of his defensive linework will get eaten up by our ultra-physical midfield and loose forwards. If we’re to win here, Sexton will need to be on the field while the game is in the balance.

If Conor Murray is fit for a big game like this, Conor Murray plays. Simple as that. Sexton and Murray are a Lions calibre halfback pairing and you don’t need an article to explain to you why they’ll start at 9 and 10 here.

This is a fairly tight decision between McGrath and Marmoin but I think that McGrath will get the nod here. Murray will do the full 80 minutes blowout score or an injury so this pick is really going to come down to what Schmidt wants from his bench option. I think McGrath gets the nod for this one. Both players are similar in a lot of what they do but McGrath’s kicking is slightly better than Marmion’s at the moment.

A lot of our work will be based on attacking France in the air for periods of this game and if Murray – God forbid – goes off injured early, I think Schmidt will want what McGrath offers; a pacey pass, decent kicking, good temperament and a good relationship with Sexton and…

Carbery covers #10, #15 and #12 at an absolute push – which Schmidt likes – but he has recent test exposure at 10 which will probably see him get the shot at #22 ahead of Keatley. Having Carbery on the bench gives Schmidt double cover in the back three, in midfield and at 10.

Conway can cover both wings and fullback to test standard which makes him a no-brainer for the #23 shirt in this game.

When it comes to this level, it’s all about the blend and giving you what you need on a given day against a given opponent.

This is the worst time to play France in the Six Nations – at home, on the opening day of the championship and with a point to prove. Forget about Scotland, this is the banana peel of our Grand Slam ambitions. We’ll have to play extremely well to get the win here.