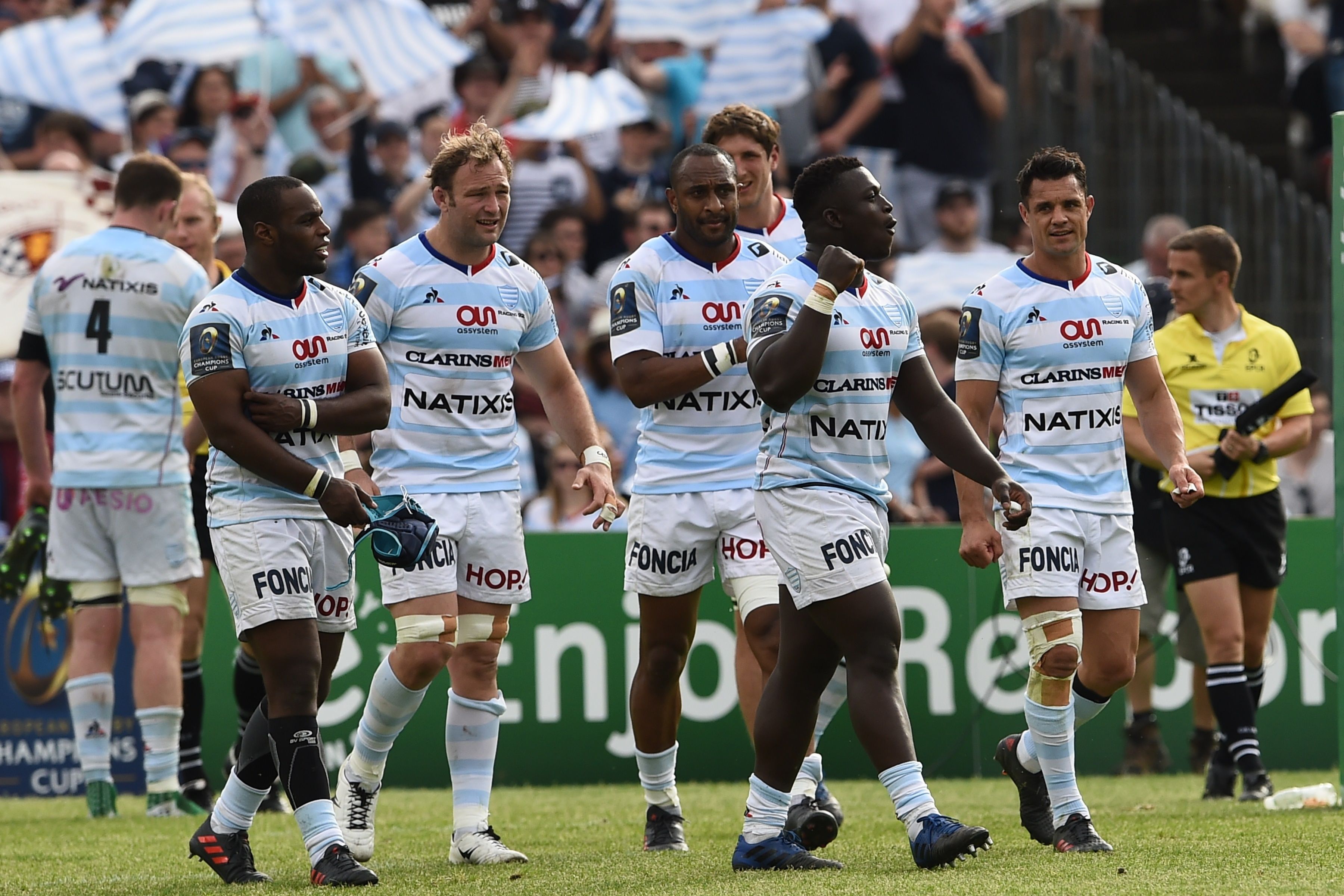 “How did it happen?”

If there’s one question that has dominated my timeline and inbox over the days since Sunday’s game, it’s that one. Just how did Munster concede three tries inside the first 25 minutes of the semi-final?

Was it the defensive system? Was it individual errors? Was it the heat?

Whatever it was, it mirrored the start Munster shipped against the Scarlets in last year’s PRO12 final in a lot of ways. That day, Munster shipped four tries in 30 minutes that killed the game. On Sunday, it was much the same, except maybe without as much finality. The result was the same – a Munster loss.

It’ll be painful but let’s have a look at how it Munster conceded the first of those three tries because the root of all three can be seen there.

This Racing try – like the other two – was built on three key principles; heavy ball retention, quick ball generation and intelligent movement of the ball. Racing built their attacking possession on the idea that two or three quick phases in succession could expose Munster on big openside plays. This GIF illustrates that fairly starkly;

The first carry is a set-up carry to plant a “fold point” for Munster’s defence, guarantee retention of possession and generate quick ball. The second ruck was going to be the launch point for the backs to attack an isolated Munster edge defence but Jack O’Donoghue and Niall Scannell managed to slow down the ball to force a slowdown on Racing’s possession – something we didn’t do enough of.

Here’s the sequence as it looked initially. The first phase is very clearly laid out. The pod of three carriers is roughly 10m away from the initial ruck and its purpose is to force Munster to fold onto the next phase. If the ball is quick – and it is – it can possibly force an overfold that can be exploited on subsequent phases. Munster didn’t get a good stop on this phase. Not only did Racing take two of our defenders off their feet, we didn’t get any kind of slowdown on their recycle.

Scannell and O’Donoghue’s work on the next phase is good in that it slows down Racing enough to allow a reset.

O’Donoghue gets a good lean on the carrier and turns himself into an obstacle that has to be removed. That gives Scannell a chance to “dog” over the ball and slow down Racing even more. He doesn’t have hands on the ball but he – again – is forcing Racing to do something about him and it gives Munster time to reset.

It would be the last time that Munster would get a significant slowdown on Racing’s possession in the lead up to the try. Let’s look at the next two phases;

The first carry – a tooth rattler from Camille Chat – was facilitated by the clever obstruction line of Eddy Ben Arous before the contact. Chat is a dynamic, aggressive ball carrier if he has 5m to accelerate into and Ben Arous’ line gives him that space to attack the gap between Kleyn and Kilcoyne. 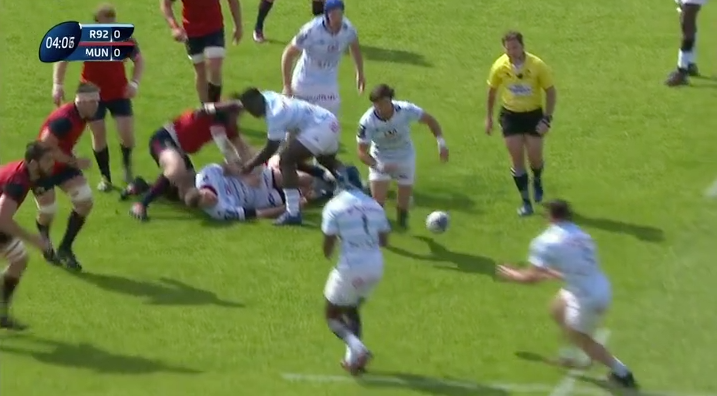 Ben Arous’ positioning means that Kleyn and Kilcoyne have to react to Chat, rather than step out to meet him and it gives Machenaud lightning quick ball to work with. Look at the slight change in lateral footwork to get across;

From there, Racing could really up the tempo in their carrying but it isn’t just about tempo – they’re targeting specific areas of the Munster defence. Their next phase saw them hit Munster in the defensive seam between the forward defensive line and the back defensive line. 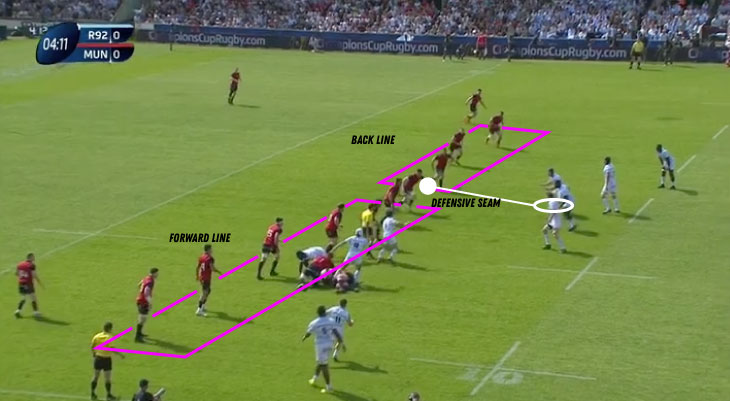 That area – manned by O’Donoghue and Keatley – is a point where Racing know they’ll force a fold because Munster’s forwards will be forced to come around the back of the ruck.

They use Munster’s defensive reload to steal another few metres – look at Lauret’s work beyond the ruck here;

Lauret moves into Stander’s channel (which CJ steps left on to avoid being unsighted) and forces Scannell to alter reload line. It’s easy to say that Scannell should have just blasted into Lauret here but that would be as likely to lead to a Racing penalty (tackling a man without the ball) as it would be to signal obstruction. Either way, Lauret’s disruption beyond the ruck gives Gomes Sa the space he needs to eke out a crucial few metres, maintain the separation between forwards and backs and present crystal clean ball for Machenaud.

This is where we can see Racing’s main attacking strategy take shape – two or three quick phases to separate forwards from backs and then strike to the edges.

You can see Wootton getting across and making a tough, angled tackled on Dupichot at pace. Now, ideally, this is where Chris Cloete (or another openside) would be coming across to either steal this ball or draw a penalty but Racing retained possession and were in a decent position to grind back across the pitch.

Let’s look at the basic alignment of Munster’s defensive set up as the ball went wide; 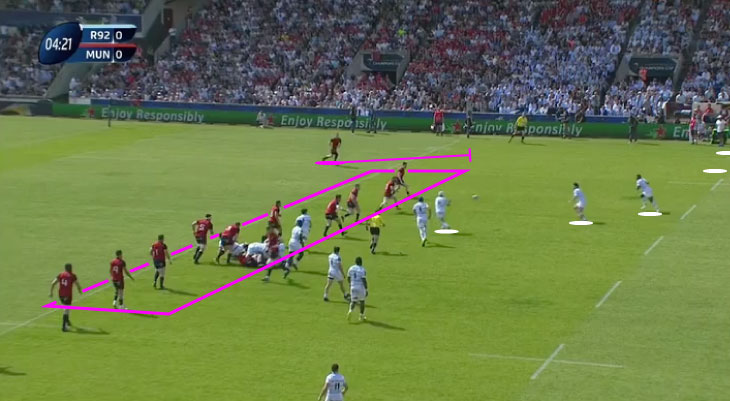 There’s a set edge defence but it’s got good connectivity. Racing have good attacking numbers outside Wootton but Conway is coming up to “shut the gate” on the space as the edge defence comes across the pitch.

It’s one of those ones that look like an overlap but aren’t really. 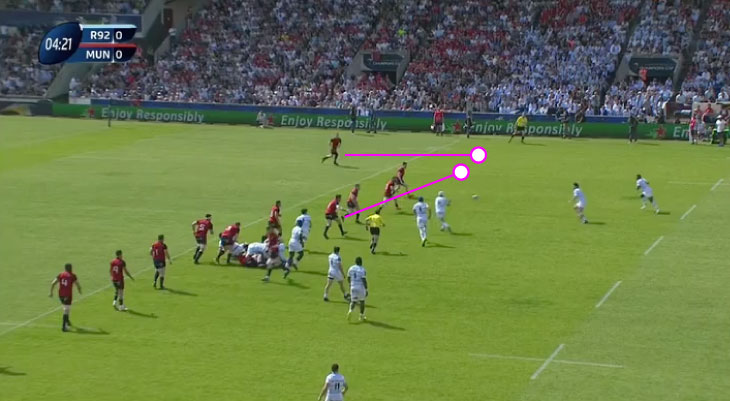 The inside shoulder is compacted and, barring a bad missed tackle, Munster are making this a simple job – get wide, get the tackle and reset. You give Racing the space outside and then back yourself to make up the lateral distance before they do. 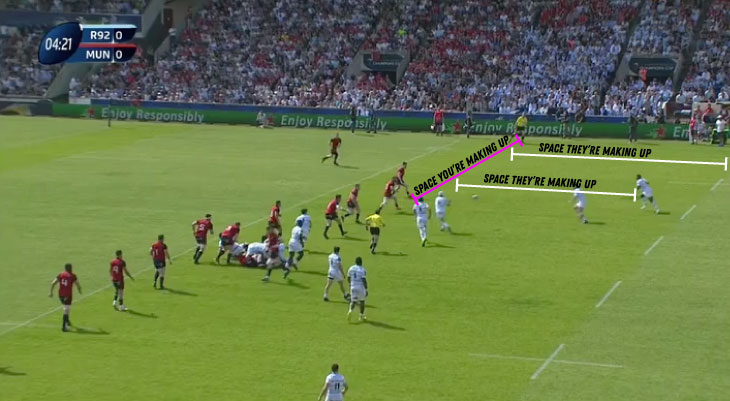 Even if you do that, you’re still at risk at the point where the last edge defender (Wootton, in this case) has to attack the ball carrier at an angle.

At this point, it’s a 2 v 2 situation and you can see Conway shouting clear instructions to Wootton; 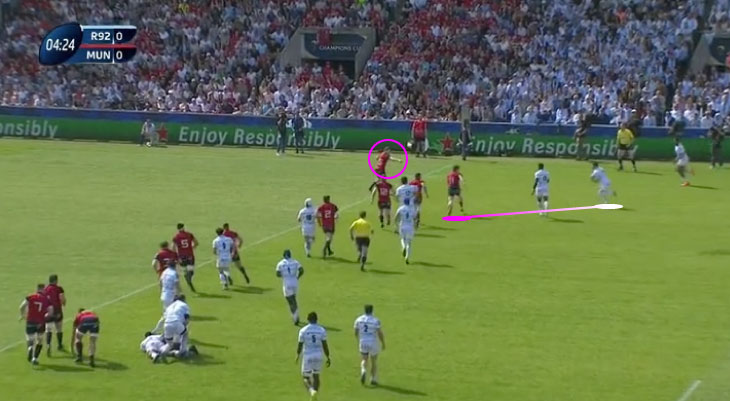 In this situation, Wootton has to get hands on Dupichot while Conway covers the pass to Thomas. This isn’t an easy skill to perform because the attacking player has the benefit of running onto the ball while the defender has a narrow-angle/window to stick the tackle. Wootton does a good job with Conway stuffing the potential offload outside.

At this point, it’s a race between #13’s to get over the ball but Arnold is at an angle disadvantage and can’t get a good position over the ball legally. You could argue that a tactical penalty concession would be a good option here given the previous phases but that’s easy to say on Wednesday.

Regardless, our defence looked good by the time Racing are ready to attack. 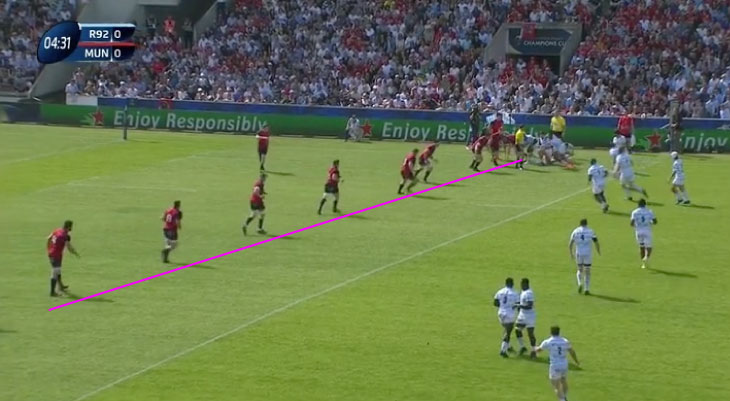 There’s good spacing, good alignments and it’s essentially forward on forward as the line goes out.

Here it is on the ruck after Thomas’ and Lauret’s carry when Nakawara comes onto the ball; 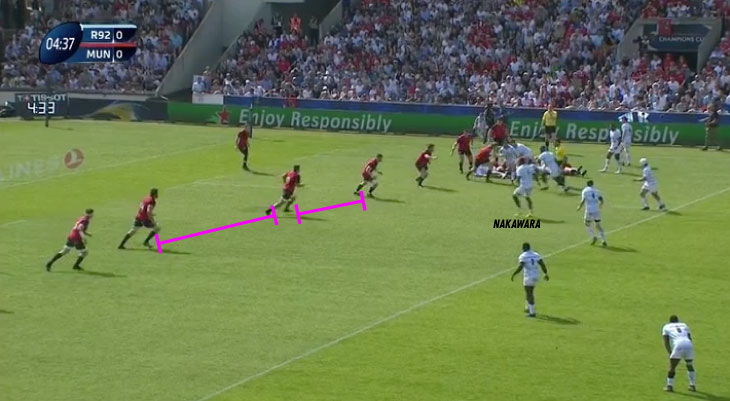 You can see that we’ve narrowed quite a bit from the line we had six seconds earlier but you can also see how Munster specifically prepared for Nakawara’s particular set of skills.

Look at CJ going straight for the elbow/forearm to stuff the offload while O’Donoghue seals off the other arm/side. It’s an effective way to prevent Nakawara from getting the ball away and it showed real preparation for that part of Racing’s game. At this point, Racing were in danger of blowing themselves out early and, as with the Wootton tackle earlier, the sequence entered a high-risk phase. A Munster turnover here would be a massive mental boost early in the game and Racing were burning a lot of energy when the game would be at its hottest.

That’s when Munster made the error;

It’s a desperate soft one to give away but shovelling the blame onto Alex Wootton – as I saw quite a few people who should know better doing – because he was the guy who missed the tackle is reductive. Obviously, he should have made the tackle, but he was in the exact scenario where a tackle like that can be missed.

Here’s the rough layout before the last ruck. 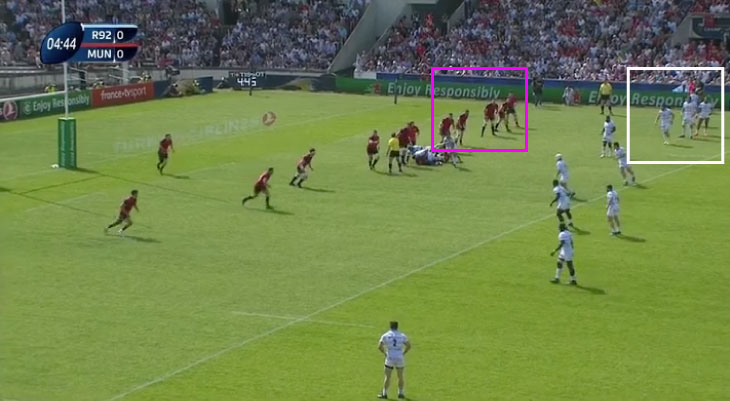 This is relevant because it stays in this alignment all the way through. There are good defensive numbers here and regardless of what Racing are doing, we should have been able to keep them out.

I think we were too compacted as the ball came back across.

When the ball goes to Thomas, Wootton has way too much space to defend as the edge defender and was giving up a massive angle advantage. Why was this though? We were too connected on the inside shoulder. 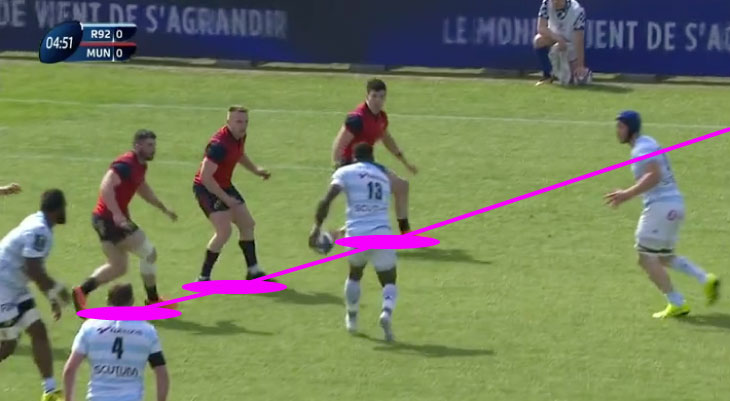 Arnold and Scannell were a little too tight to Vakatawa’s line and Wootton couldn’t push out on the pace runners as a result. So when the ball went past these two decoy options… 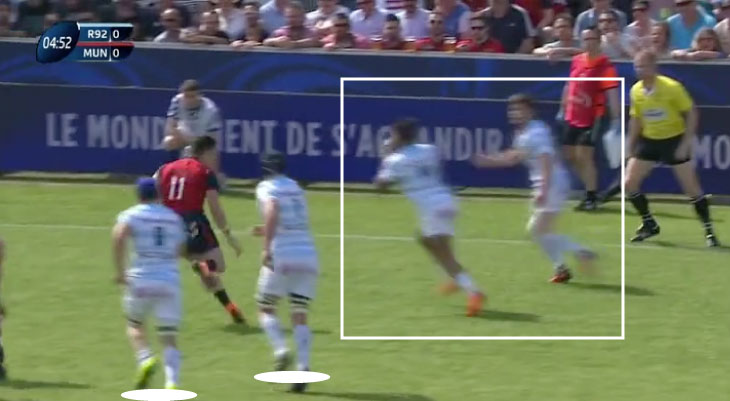 … Wootton was left with an 8m blindside less than 10m out from the try line, with two attackers to defend and with no Conway to close the gate like on the earlier phase.

Thomas goes over in the corner and Racing have the lead.

Why were Arnold and Scannell so tight? Because they had Vakatawa and two forwards to defend. How did they get in that alignment? Racing got high energy quick ball that pressured our defensive reload and alignments while constantly breaching the gain line. You can give up quick ball. You can give up the gain line. But if you do both, you’ll be consistently under pressure.

You’ll see that tight edge alignment for the second and third try;

How was this tight alignment on the outside edge generated?

By not being able to slow Racing down at the ruck or, in some cases, even getting a ruck;

Racing weren’t able to keep the intensity of this attacking style up for extended periods because they were leveraging the size and weight of their forwards and heavy backs at a high pace. Their strategy was based on front-loading their energy to the opening quarter of each half and ours was the opposite – to finish strongly. They got the reward when they were “on” and we didn’t take advantage of their cardio dips in the way we could have. I’ll look at these periods in tomorrow’s article.

It’s frustrating to look back on but it’s also fairly context-dependent and, more importantly, it’s fixable.