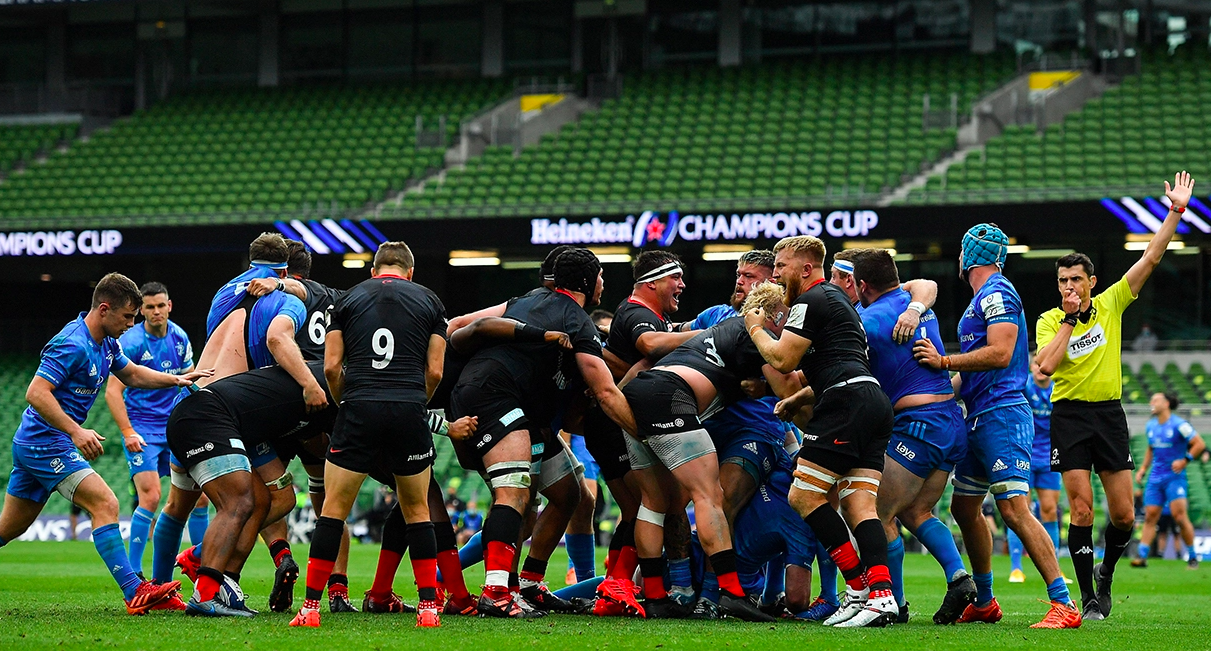 No Scrum, No Win

It's a cliché for a reason.

By Tom Savage6 min read
If you’ve followed rugby any longer than a few years, you’ll have heard the idiom “no scrum, no win” because (a) it’s one of the most prevalent rugby clichés that exist in the sport and (b) it keeps proving to be true.

Leinster’s defeat to Saracens on Saturday was just the latest instalment in a long-running story that includes the 2019 World Cup final. It’s painful, it wildly unbalances games and it shows that, at its core, rugby is still a game powered and dominated by the scrum. Long may it continue.

So where did it all go wrong for Leinster on Saturday?

(1) Devin Toner is packing down behind Cian Healy on the loosehead side of the scrum for Leinster against Vincent Koch and Tim Swinson.

(2) Leinster are playing channel two ball on this scrum (where the hooker strikes the ball between the loosehead lock and flanker) to increase the speed of their scrum. The ball is in and out of the scrum in less than two seconds.

Have a look at the forward pressure exerted by the unit of Koch, Swinson and Rhodes on Healy and Toner.

Healy takes two decisive steps backwards under big pressure from the approximate trio of Koch, Swinson and Rhodes. Doris isn’t really scrummaging on Healy in any meaningful way as he’s shaping out to create that quick channel 2 lane for Cronin to strike into. 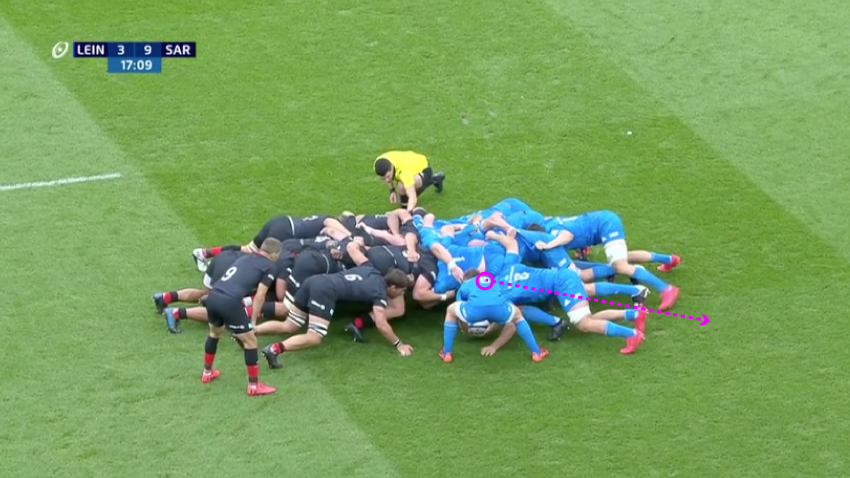 Healy’s going to be under pressure here but the scrum is designed to be completed quickly through that lane from McGrath’s put in, to Cronin’s strike, to McGrath slinging the ball away so Leinster can live with it. 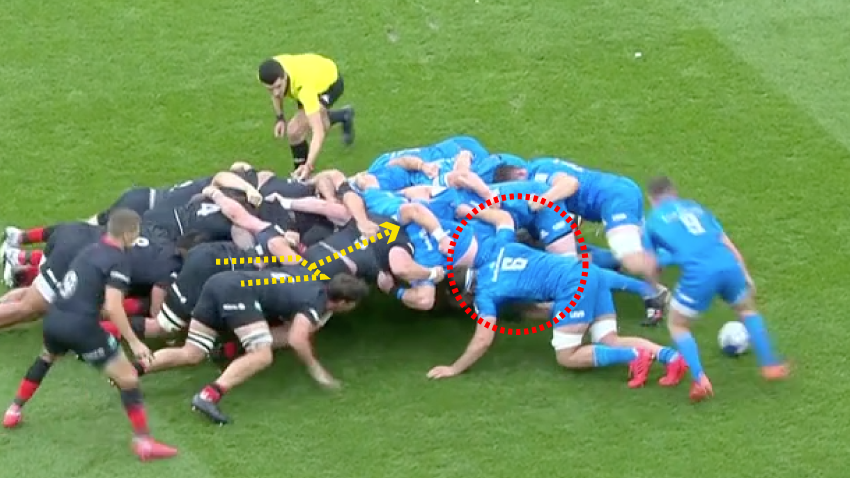 This is the first real nod to Saracens’ power from the Leinster pack. They aren’t interested in letting this ball in to soak a bit of the teaspaigh out of the Saracens pack, they want to get this ball out quickly.

On the Saracens put in, you saw why. 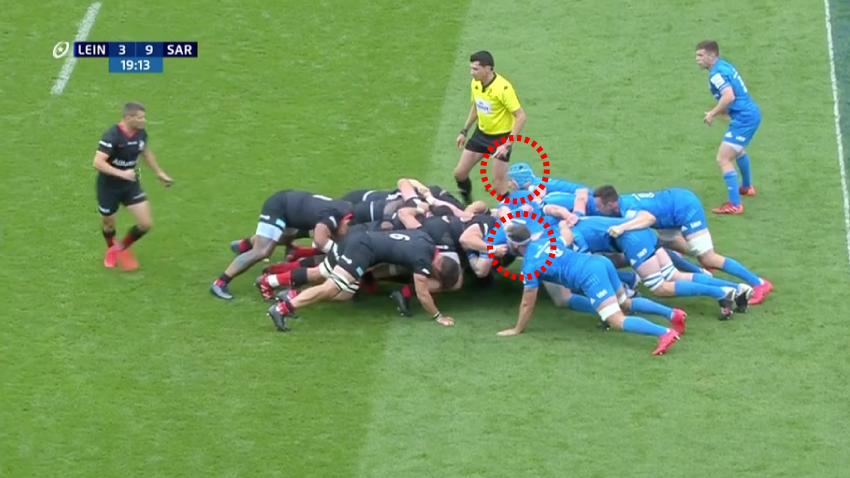 Look at how Saracens are all still locked down and scrummaging – Koch has a really strong bind on Healy to transfer force through him – but the Leinster flankers have disengaged to focus on Billy Vunipola at the back of the scrum.

Keep a close eye on how Koch and Swinson finish on Healy and Toner without Doris fully engaged behind the loosehead.

That’s a powerful low tighthead surge that drives Healy back and pushes Toner up and out. That isn’t to say there’s no pressure coming on the Leinster tighthead side but we don’t have a clean angle of the action going on over on that side. From the collapse, it looks like Mako Vunipola and Porter collapse at the same time so the isolation of Koch’s unit of Rhodes and Swinson on Healy/Toner is more profound.

Four minutes later, the same principle applied – again looking at the action of Will Connors behind Cian Healy as the scrum match up develops. Watch Connors disengage and go “shoulder off” on Healy to try and get an early read on Billy Vunipola, who George finds with a perfect Channel One strike.

Even then, look at Koch’s low bind on Healy – there are not very many good places for this scrum to go from a Leinster perspective. 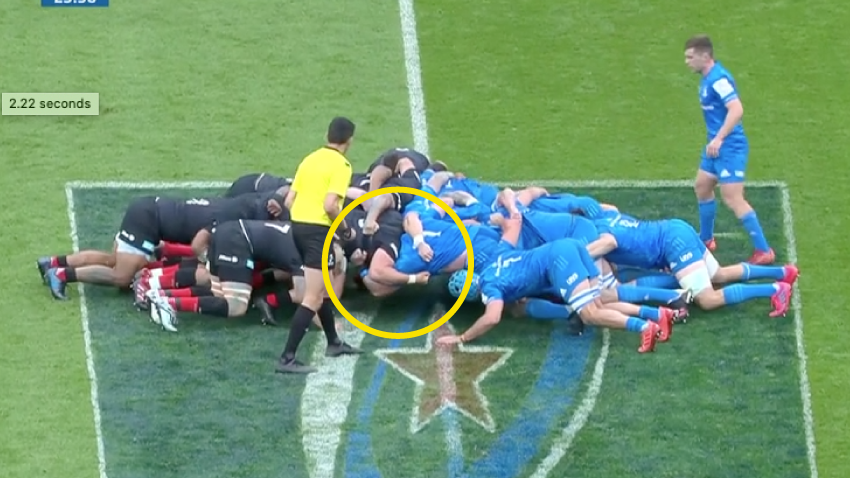 A tighthead prop wants to keep the loosehead down (most of the time) and locked in place so he can drive through him. When the tighthead has this “lock” position, the attacking scrum can strike Channel One ball, wait out the opposition’s shove and then drive through them in the slight moment of relaxation after the first counter-shove breaks.

You can see Leinster trying to attack the put-in – watch Healy and Cronin’s forward movement – but Koch has the tighthead side locked down with a strong 120º leg position, a strong short bind and Saracens power through after shove.

Connors bails out of the bind behind Healy after he sees the strike. You can see him peeking underneath to watch the progression of the ball back to Vunipola and prairie-dogs immediately once the possibility of a break arises. Look at Toner’s rise out of a good driving position too.

If we look at the body heights right after the “set”, we see Kock winning an early battle for position with a superior body position. 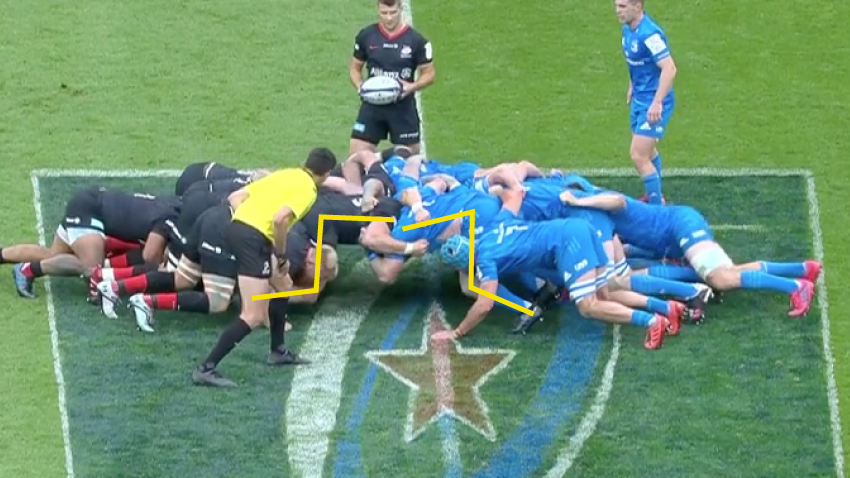 Koch’s back is straighter and, as a result, his knees are lower so he is in a better position to soak up the initial strike from Healy and then respond stronger, especially with Connors disengaged before the Saracens shove comes on.

I don’t think this scrum display is particularly shocking because there are two unique factors at play – the world class destructive tighthead scrummaging of Vincent Koch and the unique ball carrying threat of Billy Vunipola at #8. Even then, there were elements consistent across Leinster’s recent games. For example, when Munster started to get an advantage against Leinster in the scrum during the PRO14 semi-final, you didn’t see Connors bailing out as often but I would have issues with some of his body positions all the same.

On this example, Connors waits until long after John Ryan had worn down Ed Byrne with multiple attacks before fully bailing out but his initial scrummaging position still leaves a fair bit to be desired for me.

Look at his positioning below compared to Chris Cloete’s.

Cloete is smaller and lighter than Wray/Rhodes but his scrummaging position here is superb – he’s right below Ryan’s arse and driving through the line. Connors shoulder position is passive and a little too willing to slip off his prop, and this is something that repeats itself during the game. Baird, scrummaging on the loosehead side alongside Toner, is starting to come up out of his drive position under pressure.

I don’t know if I’d be comfortable saying that Leinster have a scrummaging “issue” at this stage after one big blow up against Saracens who, in my opinion, have the best scrummaging front row in the elite club game. There are small bits and pieces like some of their flanker’s scrummaging but I think that was exacerbated by the unique all emcompassing threat of Billy Vunipola combined with the direct threat of Koch, George and Mako Vunipola.

That’s pretty much exactly what you’d want from a scrummaging flanker in that position, especially when he’s pushing on his tighthead in an early defensive scrum.

To say that Healy is washed up based on this performance against Koch is ridiculous. To say that he’s starting to show a bit of wear and tear that is amplified by going up against the best tighthead in the game would be fair. Porter, too, has come in for a bit of criticism but I wasn’t able to isolate any concrete examples of him getting badly wiped because most of the damage was done on the loosehead side.

There was this incident in the second half which looks a bit like he over-extended on the “set” and allowed himself to be dragged down by Mako’s long bind.

Porter is over extended when we look at his foot position but, in mitigation, I think he was eager to win this hit and start chasing through Mako to pressure Saracens near their goal line and prevent an easy exit.

Leinster still have a good scrum, despite this unbalanced peformance, and I think the chances of this occuring again anytime soon are quite unlikely. That doesn’t reduce the impact of this game’s issues or, in my opinion, the need to unearth some new blood at loosehead (and tighthead lock) in the next year or two in my opinion.

Regardless of all that, the idiom of “no scrum, no win” has never been more evident and Leinster were the latest side to learn that harsh lesson.