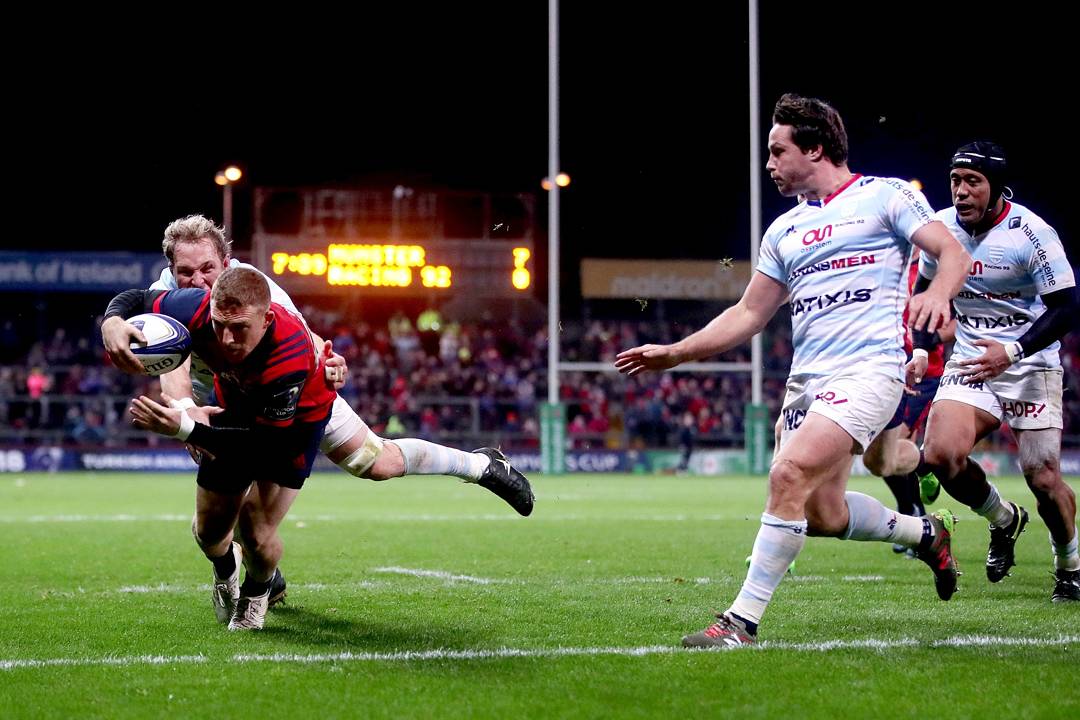 “So, what we’ll be calling on is good ol’ fashioned blunt force trauma. Horsepower. Heavy-duty, cast-iron, piledriving punches that will have to hurt so much they’ll rattle his ancestors. Every time you hit him with a shot, it’s gotta feel like he tried kissing the express train. Yeah! Let’s start building some hurtin’ bombs!”
Duke – Rocky Balboa (2006)

On Saturday, Munster beat Racing 92 in a bruising exhibition of trench warfare dressed up as rugby union in an old school gut check performance in Thomond Park. First of all, let’s not forget that two weeks ago, this was a squad that had their passion and intensity questioned by a bitter human mic stand at the Aviva Stadium. It was a stupid question then, but it left an answer hanging in the air for the casual fan who equates intensity and passion with winning.

This binary thinking goes somewhere along the lines of; when you are passionate, you win. When you’re not, you lose. It’s nonsense of course, but the question needed an answer.

In Thomond Park against a monstrous Racing 92 pack, Munster gave an emphatic answer; about what their values are, what their passion is, and who they are as men.

This wasn’t a technical battle. The video review of this game will be more like a compilation of car crashes than an examination of a game of rugby. This was pure hand to hand combat. Trench warfare played out in a storm. Munster prevailed.

To get an idea of the intensity of this game, you have to look at the numbers of the game. Racing 92 carried the ball 112 times for 145 metres. Munster carried 78 times for 140 metres. There’s that good ol’ fashioned blunt force trauma in action.

For Munster to carry half a metre more per carry on 35 fewer carries than Racing is an astonishing display of the characteristics you won’t see on a stat sheet – heart, grit, guts, determination and yes, passion and intensity.

That effort probably led to Munster’s ropey last five minutes where they gave away a few sloppy penalties and, for a horrible few moments, looked on the verge of conceding a late equaliser that would have broken hearts from Limerick to Liberia and back again. But Munster survived, and in doing so, kick-started a season with the kind of old school bruising win that were the hallmarks of Munster sides for a hundred years.

The intensity of the performance could not be questioned, but that isn’t to say it was perfect. Munster’s lineout was very hit and miss at times from a combination of the weather, some overly complex calls and some excellent Racing counter jumping. Had the conditions been different, that wastage might have been more costly but it mainly hindered our attack, rather than being more costly in defence. Our scrum was good – very good, in fact. Our maul suffered as a result of the disruption in the lineout, but we did make some good ground there in the build up to the second try. From a maul defence perspective, I thought we were generally quite good even though Racing milked a few more penalties from the maul than we would have liked. Some of those were pressure based, some were small technical errors.

Once we get a bit of stability in our pack selection, the lineout has the potential to improve and it will need to – we can’t expect to beat Tigers without a much better return from touch.

Ultimately, the weather turned this into a slugfest that Munster can take supreme pride in winning.

Racing 92 came here to win. I know that’s almost a tautology, but they really showed up for this one. As full strength as they could go, nothing left behind and grinding for the full 80. That puts this win into sharp perspective in the context of our season.

This win puts Munster in a good place going into the international break. This Racing side will be big favourites to damage Leicester in Welford Road so two more home wins plus one win from our trips to Paris and Leicester will be enough to progress, I think. Castres will be the x-factor in this group, with the potential to damage both of our pool rivals in the Stade Pierre-Antoine. The two points nabbed there will be valuable yet.

But for now, Munster can reflect on a satisfying, bruising victory against a Racing side reborn in the image of the Top 14 champions of two years ago. It was one for the purists, for the fight fans, for the lovers of blood, thunder and grit.

Echoes of the Munster of old.

As per usual, players are rated based on their time on the pitch (no rating if on less than 15 minutes bar extraordinary circumstances), if they were playing notably out of position, and on the overall curve of the team performance. Sean McCarthy is not rated due to less than 15 minutes on the pitch. Duncan Williams and Darren Sweetnam did not feature off the bench.

In the context of the game, it’s hard to rate any of the guys who featured for any extended period of time as anything other than a Three Crown Special.

Show me one guy that didn’t put his body on the line in difficult conditions and, in some way, contributed to the W.

First, the backs; let’s be clear that this wasn’t really a day for the backs (in fact, the outside backs touched the ball just 34 times) but for me, Ian Keatley had one of his best ever days in a Munster shirt. He moved Munster around the pitch, turned Racing excellently in the second half and dinged the ball into the corners when needs be. His two conversions from the touchline were absolutely vital. This was a big game for him personally and, like everyone else, he showed up when it counted.

Conor Murray didn’t have a great game up until the 60th minute. He was a little inaccurate in his passing, his kicks drifted in the wind and he looked a slightly frustrated figure. On 60 minutes, Conor Murray did what Big Game Players do and produced the goods on the big game with his chargedown try. A vital score.

Rory Scannell and Chris Farrell hit everything that came down their channel, and then some. Farrell really impressed me in contact and sat down Racing’s massive midfield on a few occasions. Scannell tackled like a mad man and had the vital last hand before Conway’s try. A really solid game from them in the challenging conditions.

Darren Sweetnam, Keith Earls, Simon Zebo and Andrew Conway didn’t have to do much given the conditions but what they did do, they did well. Sweetnam was reliable under the high ball and Conway took his try well. Simon Zebo and Keith Earls were a fingertip away from one of the greatest tries ever scored in Thomond Park. Not a day for the back three by any means, but good work all the same.

Here’s what you need to know about the pack; they showed up to fight and tackle for their lives.

The Tackle Stats tell the story.

They may fluctuate a small bit but not by enough to make this anything less than a Herculean defensive effort. Every time that massive Racing pack carried the ball, there was a Munster forward there to meet them. Racing’s pack carried the ball 92 times (82% of their total carrying) for only 102 metres. That is an astonishing defensive performance from Munster against one of the biggest, strongest, heaviest teams in the Champions Cup on a wet track. These weren’t soak tackles either – they were dominant, statement hits.

To keep this quick, I’ll give a one sentence review for all of them;

Dave Kilcoyne: An absolute savage with a growing totemic presence.
Rhys Marshall: His darts weren’t great but his work around the field show his quality.
Stephen Archer: Outstanding in the scrum and seemed to be everywhere in defence.
Kevin O’Byrne: Some excellent throws and a vital role at the back of the maul in the build to the winner – we’re blessed with hookers.
John Ryan: Came on at 50 minutes and was kept up the pressure all over the pitch.
Jean Kleyn: Absolutely vaporised some massive men in contact and imposed himself on both sides of the ball.
Billy Holland: He just never stops working – ever.
Mark Flanagan: He’s a real grafter and got the vital hand in at the end to turn the ball over for the win.
Peter O’Mahony: Three silly penalties aside, O’Mahony just dogged this game out in the trenches and became more of a lineout threat as the game wore on.
Tommy O’Donnell: He just hit everything in white and sky blue hoops until he was told to stop; a warrior.
CJ Stander: He carried manky ball all night long and brutalised Racing’s monsters to a standstill again and again and again in defence – selfless.

The replacement forwards came on and kept up the level in defence. Kevin O’Byrne was particular impressive, for me.

You don’t win a game like this, against opposition as focused and good as this without everyone performing to a high level. Put the bodies on the line and it’s Three Crowns every day of the week.

They stood up and fought AND won. That’s what matters.

This week on TRK Premium I’ll be covering Munster’s astonishing defensive display, Keatley’s good game at 10 and our work in the lineout/maul. Plus all the usual scouting ahead of our visit to Connacht this Friday night in the Pro14.