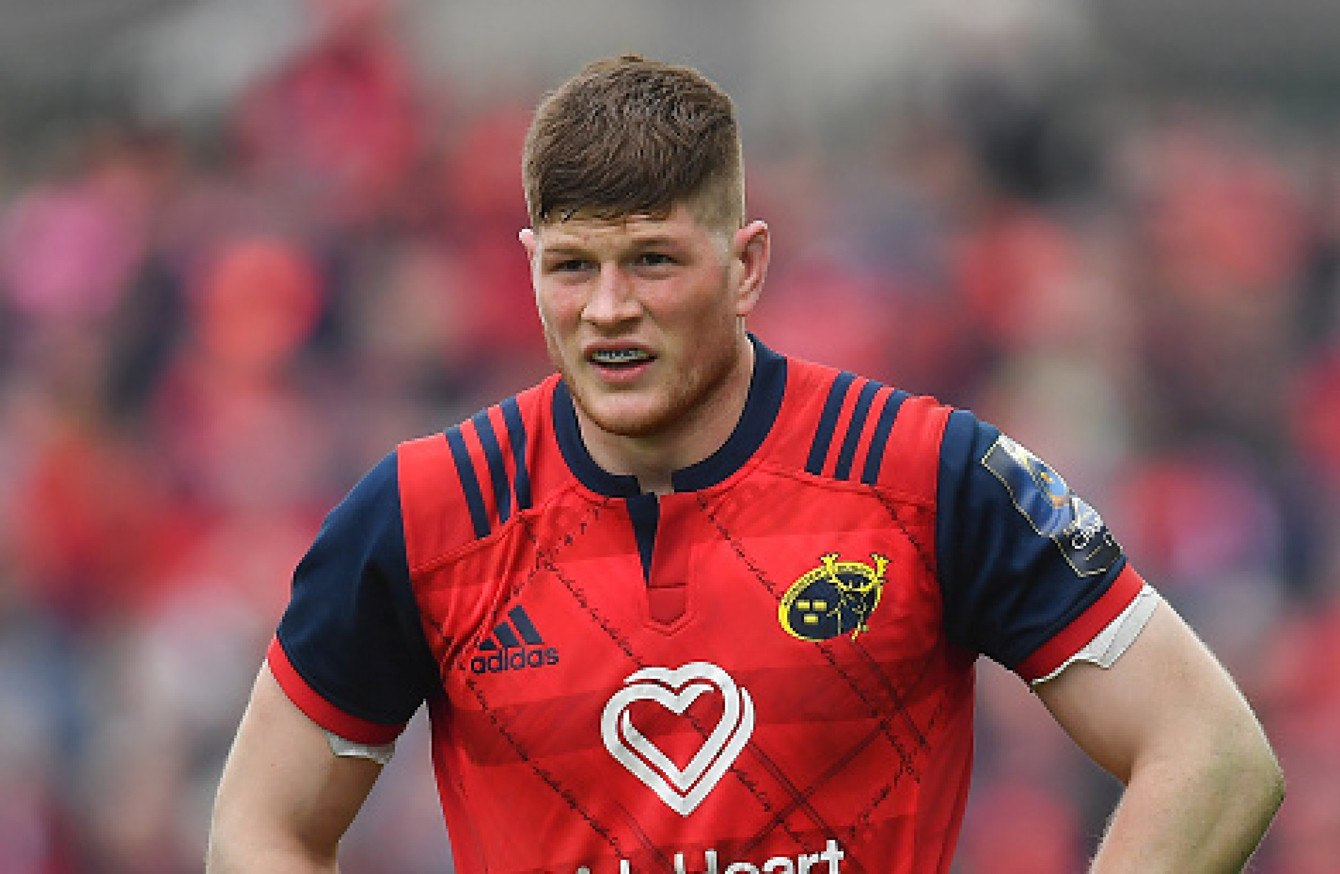 Jack O’Donoghue is a nice guy. One of the nicest. But let him hang around your maul and, chances are, he’ll kill it stone dead.

On Saturday against the Southern Kings, O’Donoghue turned over three mauls and, while he obviously couldn’t do it on his own (as I’ll illustrate), it’s an area of the game where O’Donoghue has shown consistent improvement over the past few seasons. So seeing O’Donoghue having such an effect on maul defence is no shock, let’s put it that way.

Let’s have a look at how Jack O’Donoghue killed the Kings’ maul.

There’s no one thing that Jack O’Donoghue does that makes him so effective in maul defence and that’s a good thing. If you have one gimmick, it doesn’t stay effective for very long and O’Donoghue has a wide array of attacks that he brings to the table.

Let’s have a look at his first attack;

First thing you notice? O’Donoghue is the primary counter-jumper on the Kings’ lineout. He shows up on his maul attacks in this position quite a bit – as a late arriver to the shove – and it has a few advantages. Being a late arriver often gives you a good look at a weak seam at the front of the maul. Sometimes that can be a loose shoulder bind or guys out of step with each other as the attacking maul advances.

In this instance, it’s a sloppy bind from Scholtz (Grey #3) that gives O’Donoghue an opportunity. 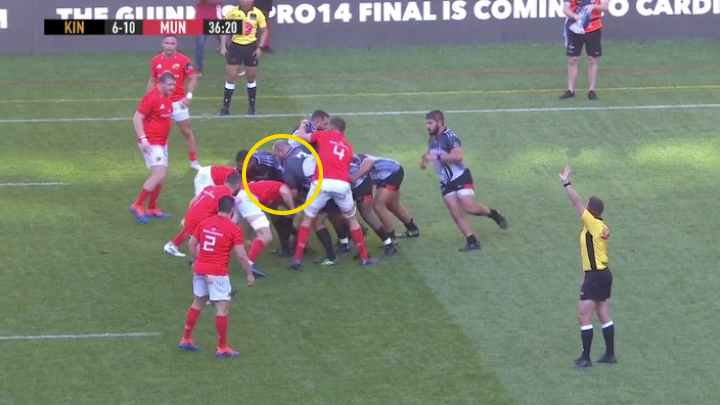 Scholtz was part of the Kings’ lineout lift but O’Shea did a good job of stuffing the initial maul build, which prevented the tighthead from getting set at the front of the maul. That gives O’Donoghue space to drive into.

Here’s where it gets interesting; watch O’Donoghue embed himself into the Kings maul – through that seam at the front – and move closer to the ball carrier as it moves around him.

This is the key position for me. Once O’Donoghue has forced his way through the middle, he braces himself on the floor, using the Kings own movement to stick into their maul like a thorn. With every step of forward movement, O’Donoghue gets closer to the tail of the maul. 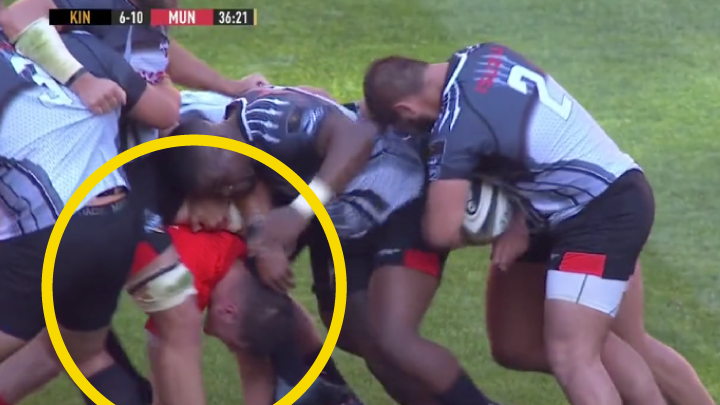 First of all – is this legal?

Well, Law 16.9 says that “players must endeavour to stay on their feet”. While O’Donoghue is certainly using his arms to brace himself here, I would suggest that there’s no direct sanction in place for not staying on your feet if you aren’t actively collapsing the maul, which O’Donoghue isn’t doing in this instance.

The result is that O’Donoghue ploughs straight through the Kings maul, gets straight onto the ball carrier and sacks the maul.

O’Donoghue was back at this low body position later in the game on another maul defence set. 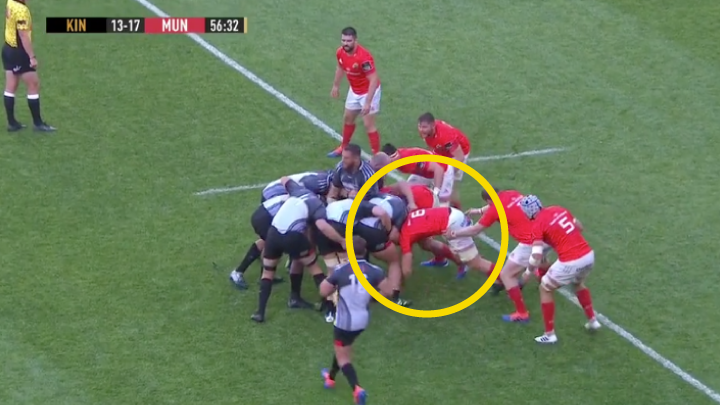 The first thing I want to point out is that this “all fours” body position puts O’Donoghue’s shoulders lower than the player guarding the front of the maul.

He’s risking a free kick here – shoulders lower than his hips – but it’s a rarely called violation these days. O’Donoghue’s braced position allows him to, once again, become a “thorn” in the Kings’ maul as it moves forward.

You’ll notice that Jack is the only Munster player on all fours on this set and that the rest of the Munster pack are encouraging the Kings to peel around the corner by giving them an infield edge to attack. It’s risk and reward in some ways; O’Donoghue isn’t as effective on the counter-shove in this body position and there is a risk that the Kings could peel around the corner and generate massive momentum, but O’Donoghue has shown the ability to attack mauls effectively in this position so, at this range, just on the 22, it’s worth the risk.

In this still, you can see that Wycherley is standing off the maul (along with three other Munster forwards) – the risk – and “giving” the Kings a peel towards the touchline. When they take it, that opens a weak body position for O’Donoghue to pile through – the reward. 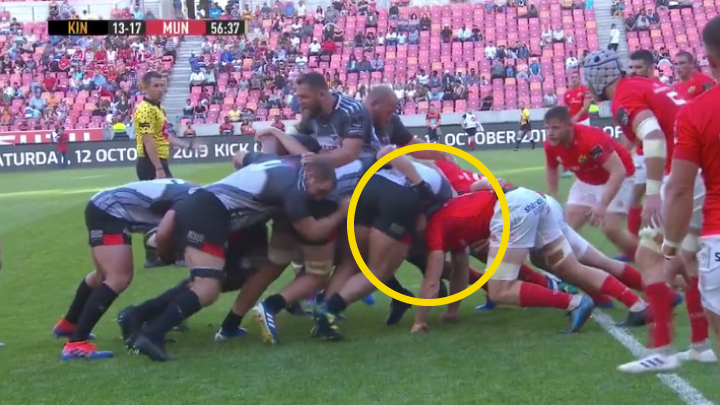 He got straight through onto the ball carrier but didn’t get the reward from the referee. We would give away a maul penalty on the second part of this shove, do so again on the next mauled penalty and take on a close-range set with a referee’s warning in Billy Holland’s ear.

When you’re on a warning like that, you have to take a low-risk approach. Munster threw in five defenders to this maul and couldn’t afford to leave O’Donoghue out of the primary shove in his “thorn” position for a few reasons. You wouldn’t allow the kind of forward movement from the Kings that the thorn technique needs this close to the try line and you can’t risk being seen to give away a maul collapse this close to your tryline on a warning.

Let’s see how it plays out;

A massive, game-defining turnover from O’Donoghue. He punishes a sloppy build after the Munster infield shove stood up two of the Kings’ maulers. That gave O’Donoghue a clean look at the ball carrier without changing his bind.

It was a big steal at a crucial moment.

O’Donoghue’s core strength, long wingspan and ability to insert himself deep into opposition mauls makes him a dangerous and hugely effective maul defender.

Get access to articles like this as well as podcasts, streams and videos on Munster & Irish Rugby on TRK Premium.