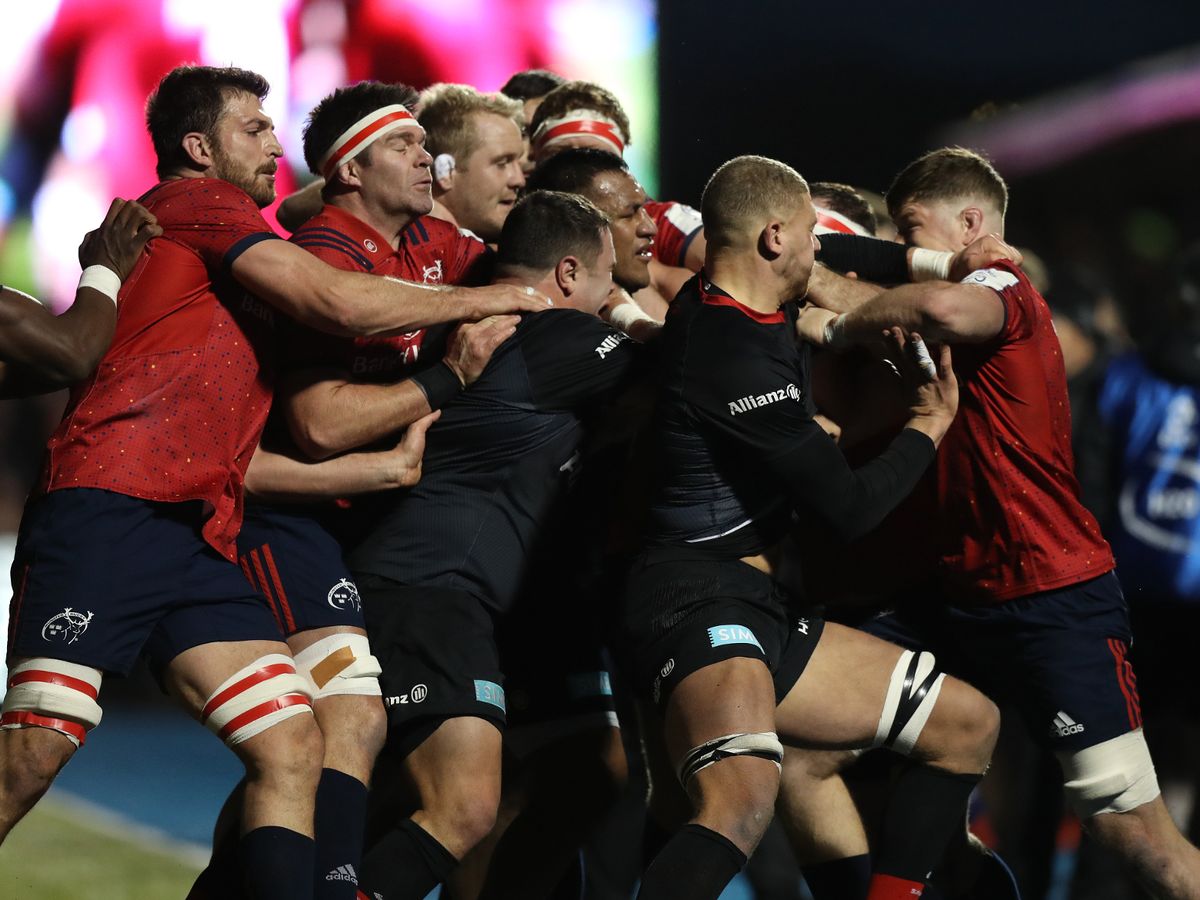 The Ballad of Maul Killer Jack

Jack O’Donoghue is a serial killer.

We know this. All you need to do is look at him. Those eyes are the eyes are a killer. When he sees his target, nothing can stop his thirst for death. I’m talking about mauls, of course. Killing mauls. Serially.

He does it so often these days that it’s become one of the key parts of his game. Jack O’Donoghue is an intriguing player to me. He wasn’t one of the players selected for Ireland camp this past week but you’ve got to imagine he’s close.

If we assess his game and profile we see a good-sized back row (6’3″/17st) with an excellent lineout specialisation. On attacking or defensive ball, he looks like a really solid jumping/counter-jumping option.

This is just good explosivity and agility at the top of the jump when the throw isn’t exactly where it needs to be. Up against Isiekwe in a straight race at the front, you’ve got to be quick to make up for the height differential and O’Donoghue did really well here.

He’s got a good wingspan – which is an important a trait as height when it comes to the lineout – and he’s got good habits pre-throw.

Everything about his pre-jump here is great. He’s not selling anything right up until he snaps into action and once he’s moving, it’s just good stuff. Quick over the ground, a well-timed jump and he takes an excellent throw in between two full counter-launches. He’s a little unlucky not to get a penalty for being taken out in the air here but everything up to that is solid; the ball transfer, the turn in the air after possession – all good.

He’s continued to build on his “brace” on landing and he’s a very solid option to build a maul around now. This is another excellent example of his quality. Watch the sell of each decoy position as he cycles from the back to the front.

All effective sells, and without any loss of pace on his way to the launch. On landing, he resists a heavy counter-surge from Kpoku and Kruis to transfer the ball back and helps Munster to pivot around the corner.

All good stuff. Even the botched lineout in the second half where O’Donoghue was the target, wasn’t really his fault.

This is a good contest from Isiekwe but the throw is a little low for me. O’Donoghue and Isiekwe get into the air at the exact same time but O’Donoghue gets fantastic height in comparison. We’ll allow Isiekwe an out here with Koch’s sloppy approach at the front but jump for jump, O’Donoghue shows his strengths here. The throw is a little low for me – and that brings Isiekwe’s wingspan into the game – but all of O’Donoghue’s lineout fundamentals are here to see; great movement, lateral pace through the line, good deception on his body shape and explosive jumping.

If he’s being judged down in an Irish context, I don’t think it’s for his lineout work.

Defensively, I think O’Donoghue is a good technical defender. He certainly can smash lads but he’s a more considered, intelligent defender. Here’s a decent example of where I think he’s strongest;

Covering that edge space inside the backs is a good place for O’Donoghue. He doesn’t charge off on big runs out of the structure and he’s patient with his positioning. He’s mobile, covers space well and makes good technical shots. You can see him going low on Kpoku as part of a high/low hit with Farrell and getting a shin trip after getting a strong tackle on the lock’s thighs and progressing down to finish his part of the double tackle.

He had some very good physical stops over the course of the 80.

O’Donoghue had a massive defensive work rate on Saturday against Saracens. He had 18 tackles with 4 missed. Only one of these was a proper miss. Two of the others were technical misses where he started a tackle but backed out when it was completed by someone else.

One of his missed ones was a side on scrag on Vunipola off the side of the scrum.

He got caught at a bad angle from scrummaging and Vunipola’s lateral attack line off the scrum was strong. O’Donoghue does go high, but he’s going for the part of Vunipola closest to him. 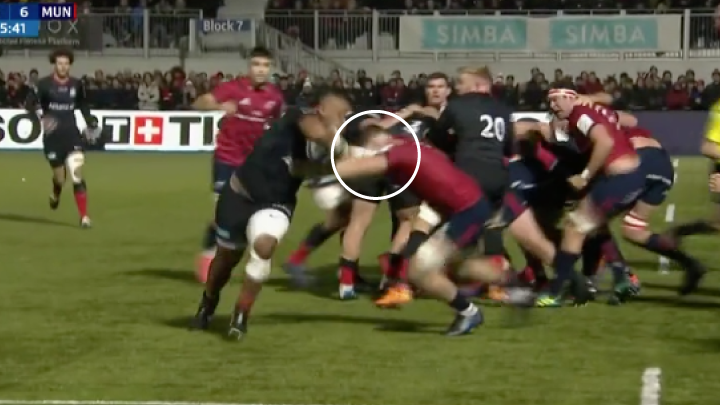 Vunipola’s fend and O’Donoghue’s slight angle of attack make this his worst miss. He was on the scene for the Mako Vunipola try but, once again, he was attacking from behind the ruck and a negative angle.

I think we’re a little too spaced out on this close range set, personally.

I had a criticism of O’Donoghue in the past it was that he maybe lacked a bit of “poison” on some of his hits – aggression, essentially – but I think he’s rectified that over the 12 months since coming back from injury. The scrap in the 49th minute ended up poorly for us overall, but I liked what I saw from O’Donoghue here.

A forward coach I worked with in Italy would pay close attention to any videos of fights in our games. He’d be looking for players – forwards in particular – who weren’t jumping into these scraps. O’Donoghue is right in it here, not taking a backwards step and I like that.

But even with this very solid performance, O’Donoghue wasn’t included in the Irish “stocktake”. Why was that? I doubt the decision was made over the course of one game. I thought O’Donoghue played well against Saracens – especially at short notice and with scaling lineout responsibilities during the game – but if there was one area where I thought he fell down, it was on the attacking side of the ball, especially in the carry.

He’s not a bad carrier of the ball in the wider areas – he’s a good strike zone runner – but I think he’s falling in between two stools at the moment; that is to say, not an explosive carrier against big opposition in tight exchanges and not dynamic enough in the wider channels. In this game, I think he was forced to play the role that Peter O’Mahony has found over the last few big games – a tight handler of the ball off #9 with expanded close-quarter carrying – and I don’t think that suits O’Donoghue’s strengths right now.

He didn’t lose any ball in contact on Saturday but the two GIFs above tell a consistent story throughout the game. When Jack runs onto the ball in that middle space, I think he’s a real danger but he’s been unlucky in some of the positions he’s found himself in.

That said, I don’t think O’Donoghue is even close to finishing his development. I think he’s got the frame for a little more bulk and, as long as it doesn’t hurt his lineout work, I think that will tighten up his hammer zone platform carrying and increase his effectiveness in the opposition 22. It might reduce some of his mobility on both sides of the ball in the wider areas but I think Jack has the frame for it.

If Jack can tweak his attacking game and keep working on his passing and offloading – which has come on this year too – I think he can build on his two Irish caps, especially if he can stay fit. He’s 25, incredibly versatile, hard-working and every other facet of his game is, in my opinion, ready to go.

Get access to articles like this as well as podcasts, streams and videos on Munster & Irish Rugby on TRK Premium.