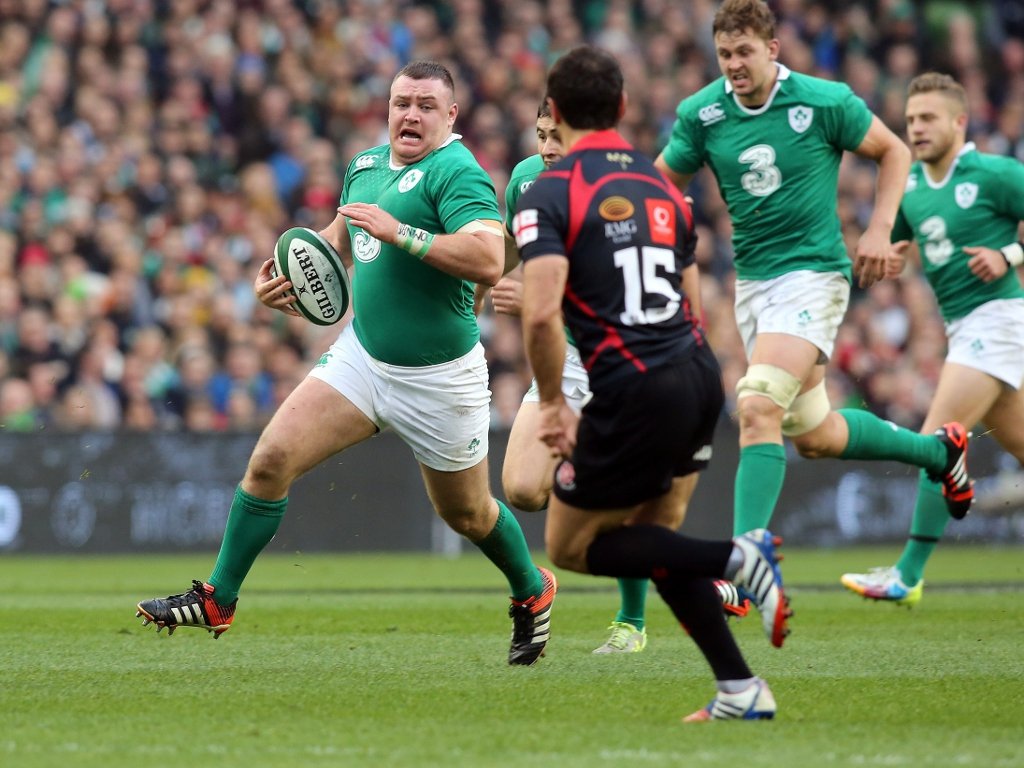 How to maximise your close range opportunities

By Tom Savage7 min read
We’ve all seen close-range lineout opportunities getting mauled to a standstill before the try line. It always seems incredibly frustrating – like a “tap in” gone a begging – but, like a lot of things on a rugby field, it’s a lot more difficult than it seems. The distance between the 5m line and the try line looks small enough on the TV but anyone who’s ever even walked near a rugby pitch knows different, especially when the opposition’s biggest, heaviest forwards are lined up and ready to drive you back the second you’re about to touch the floor.

As we’ve discussed previously, whoever builds the functional “engine” of their maul first – attacking or defensive – will have a huge advantage over their opponent and that build speed depends on a lot of factors such as your jump site, your overall scheme and the accuracy of your work.

We’ll start with an example of this process so we can better understand the concept of build speed. Here’s a close-range lineout from Ireland’s World Cup defeat to New Zealand.

That’s very solid maul defence by the All Blacks. Ireland ends up with a net loss of position off the back of this lineout maul but when we drill into the details of it, we can see clear indicators of how it happened.

As Ryan was coming down from the peak of his jump to affect the ball transfer, New Zealand had three players (Retallik, Lualala and Moody) entering their maul defence shape with two more (Whitelock, Savea) ready to pile in when Ireland commit to the maul on the floor. 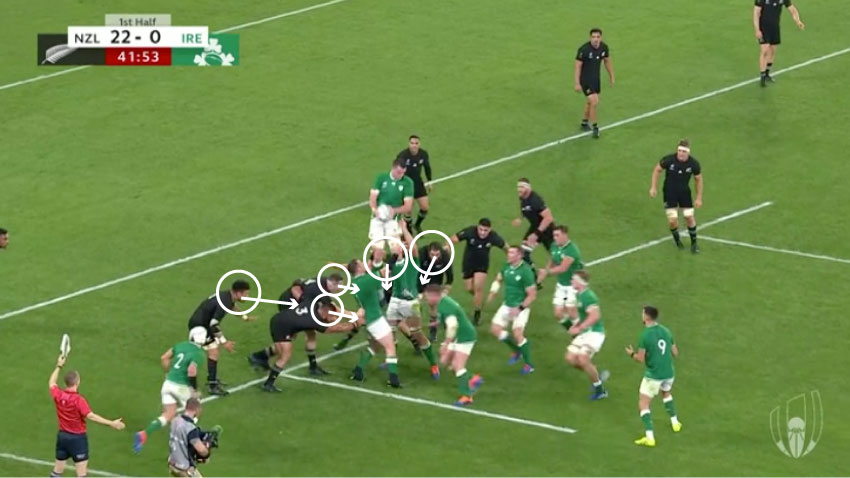 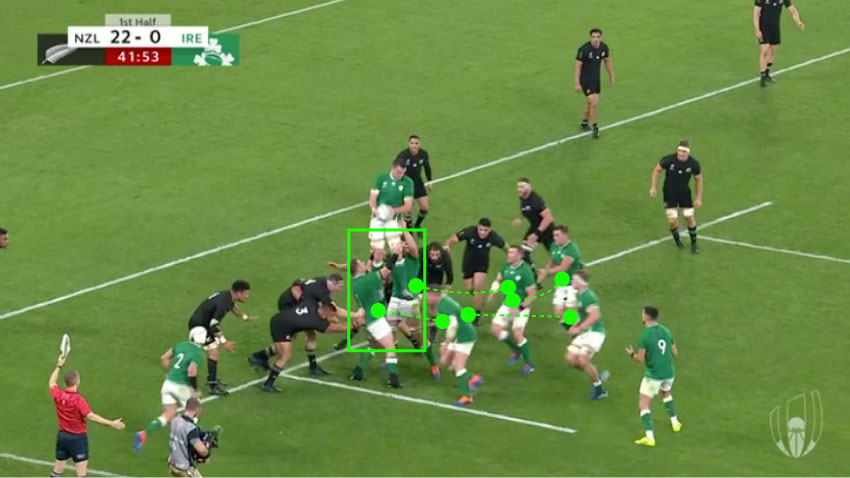 Healy and Henderson are relatively upright – as you’d expect at this point of the lift – but Retallik and Lualala are already bound – both to each other and to Healy – and are ready to counter shove the second they see Ryan’s feet hit the deck.

Ireland are looking for a “momentum punch” here. This is where you have a relatively static launch point (Healy, Henderson and Ryan in this case) that acts as a target for a big component part of the maul. Furlong – Ireland’s heaviest forward – is that big component in this case and his peel around from the middle of the lineout is designed to punch at the hinges of the All Blacks counter.

Ireland would have scouted the All Blacks maul defence in situations like this and realised the potential to “break” their angled counter shove with a powerful “punch” that we can then flow through and around.

Basically, we’d have known that they tend to drive infield in these situations so Furlong’s strike against that inward angle would open up a slide around the corner. I think this fell down because Retallick managed to bump Healy in, and that blunted Furlong’s strike which stuffed our maul build and gave all the momentum to the All Blacks.

You can see our initial scheme is quite “flat” in that we’ve gone for a full seven man scheme and no receiver in place. 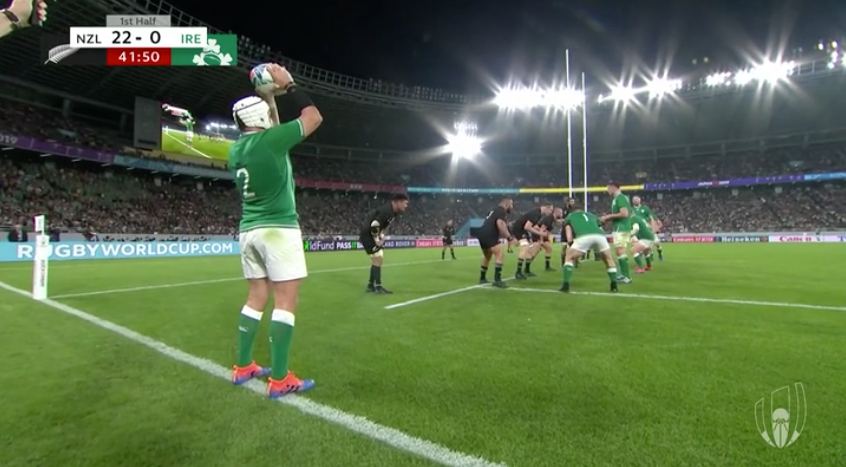 That creates an element of doubt in the opposition when it comes to where a potential launch point and maul might be but it also slows down your own build because the requisite drive parts of the maul take longer to get in position. This doesn’t apply to the opposition so you’re at a disadvantage unless you’re certain that you have a dominant physical advantage in the maul.

Basically, if the opposition thinks they know where you’re going to maul, they will focus more personnel there to stop it. When you have a “heavy receiver” – a forward in the receiver position – it gives the opposition an idea as to where a potential maul might be built.

Personally, I’d like to see Furlong used as that heavy receiver in a situation like this. If he was standing in the second layer of the lineout in a position to advance at pace to receive the ball straight from the lineout jumper you could realistically threaten a maul anywhere in the line, especially at the tail of the lineout where mauls are inherently more dangerous for the opponent. 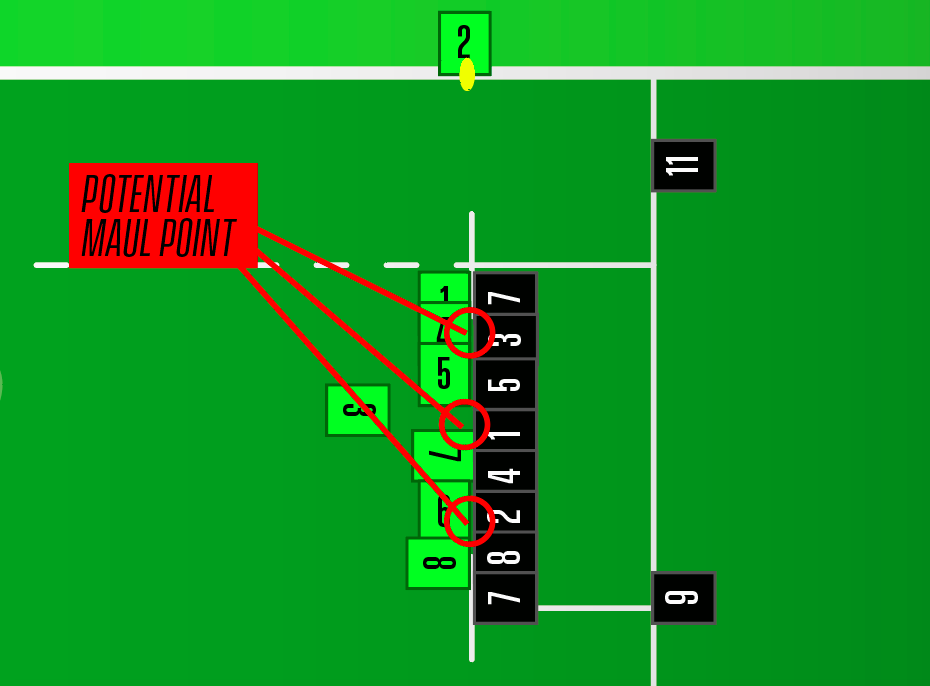 If the Irish maul played out exactly the same, but with Furlong as a heavy receiver, there’d be a much great chance of getting a positive gain on metres. 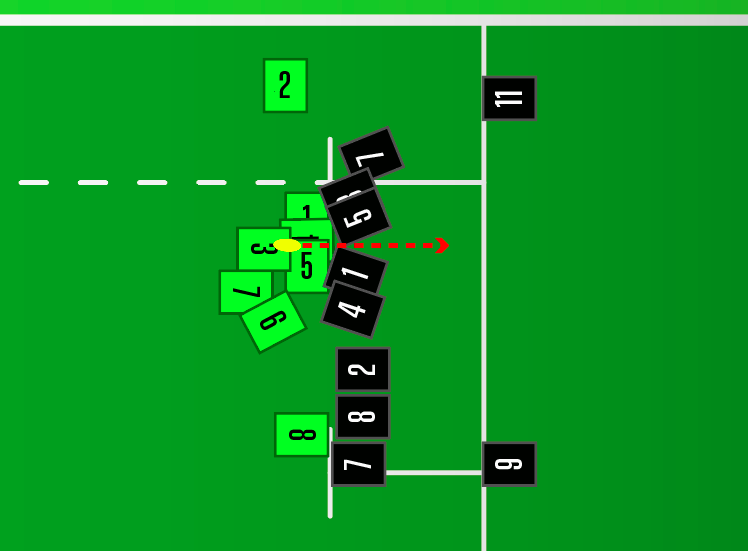 Furlong driving in at speed onto Ryan with Healy and Henderson immediately sinking into push positions and the back row pod adding momentum? It might not score a try but it would certainly advance the ball close to the line where you could use Stander/Henshaw or another ball carrier to attack the compressed All Black defensive line.

It’s tough going but it shows you how difficult these 5m conversions are. So how can we manipulate these tendencies of build structure and timing?

When and Where To Use

This is our starting position. 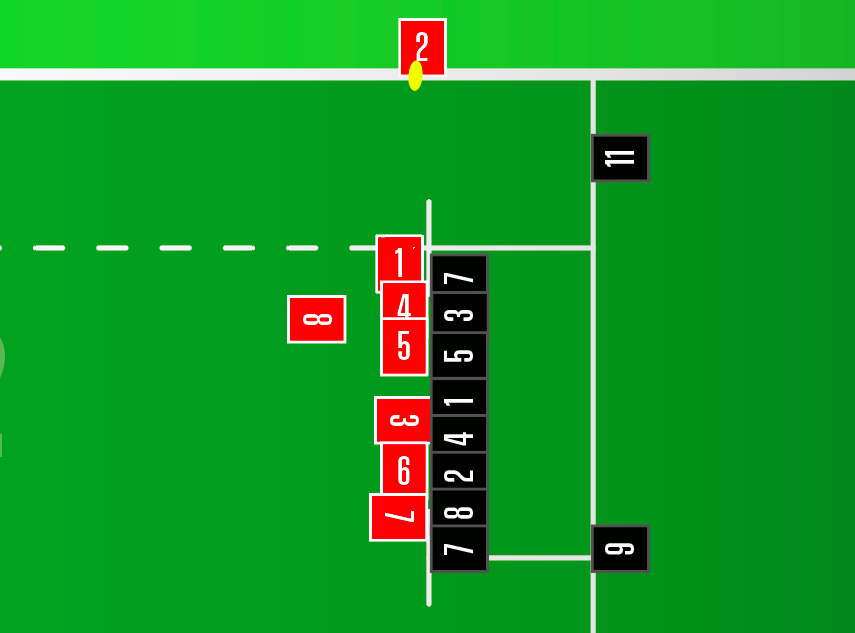 The #1 should be in a lift on #4 at the start of the scheme. Our #9 is away from the lineout but will move to the tail of the lineout on the throw.

When #8 starts his movement, we want to start the following pattern.

We want to give the impression that we’re starting a maul at the front of the lineout. There’s a lot of movement there so we’d like to attack the opponent for stacking players there to defend a maul in that position. 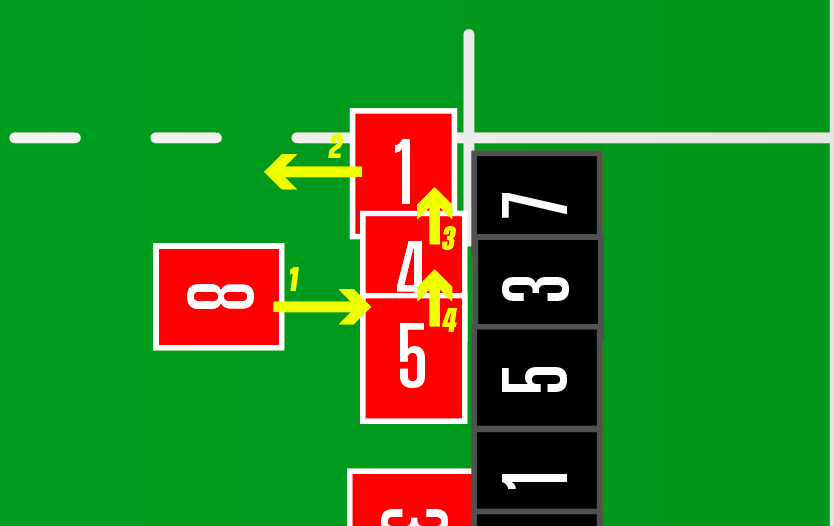 #1’s movement could easily look like a maul set up here too, at least initially.

Meanwhile, the back pod will compress to the tail of the lineout and the throw – going on the count of three – is to the tail pod.

But the key part of this is movement is that the front pod has to launch into the air too.

Both pods should go into the air at roughly the same time.  Our #1 must peel around and attack the middle space between the pods as the ball leaves the hooker’s hands.

The flanker jumping at the tail will pass the ball back down to the loosehead from the top of the jump. 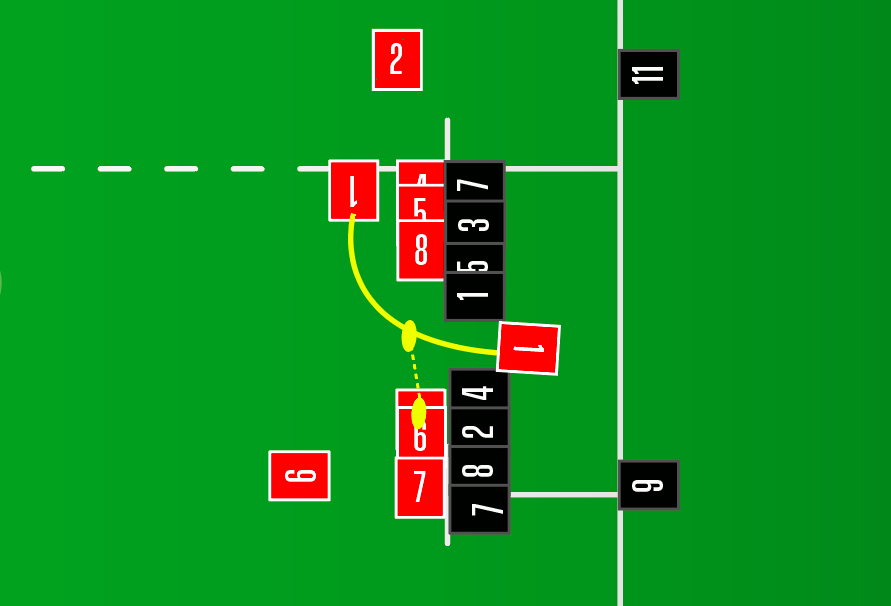 We want the #9 running to the tail pod to take a pass with our backline animating for a potential crash ball off the midfield. We want that to draw the interest of the tail gunner so that the middle space defender has to cluster on the tail pod.

It’s likely that there’ll be a middle space defender that doesn’t get dragged to the front or to the tail but we want to have enough power on the carry – this is where the acceleration of the prop is important – to drive them back if they manage to get a hand on us.

If we get a clean break, it’s a try. If we take contact, we’ve got a dominant carry position with #9 running in to support and snipe with the other forwards – especially the front pod – aware of where the target is going to be.

You can drill this pretty easily with just the tail launch pod and the timed runner from the front but the timing of the heavy receiver cycle to lifter will take a bit of timing to pull off. Think of it as a square dance in line with law 18.18 that allows players to swap positions in the lineout before the ball is thrown in.

Targeting the middle space of the lineout is a bit of a hobbyhorse for me because I think it’s a very underutilised – and risky, yes – part of the line to attack with a bit of deception and the right skillset/timing in your launch pods and accuracy at hooker.

The next lineout playbook will focus on more traditional lineout schemes.