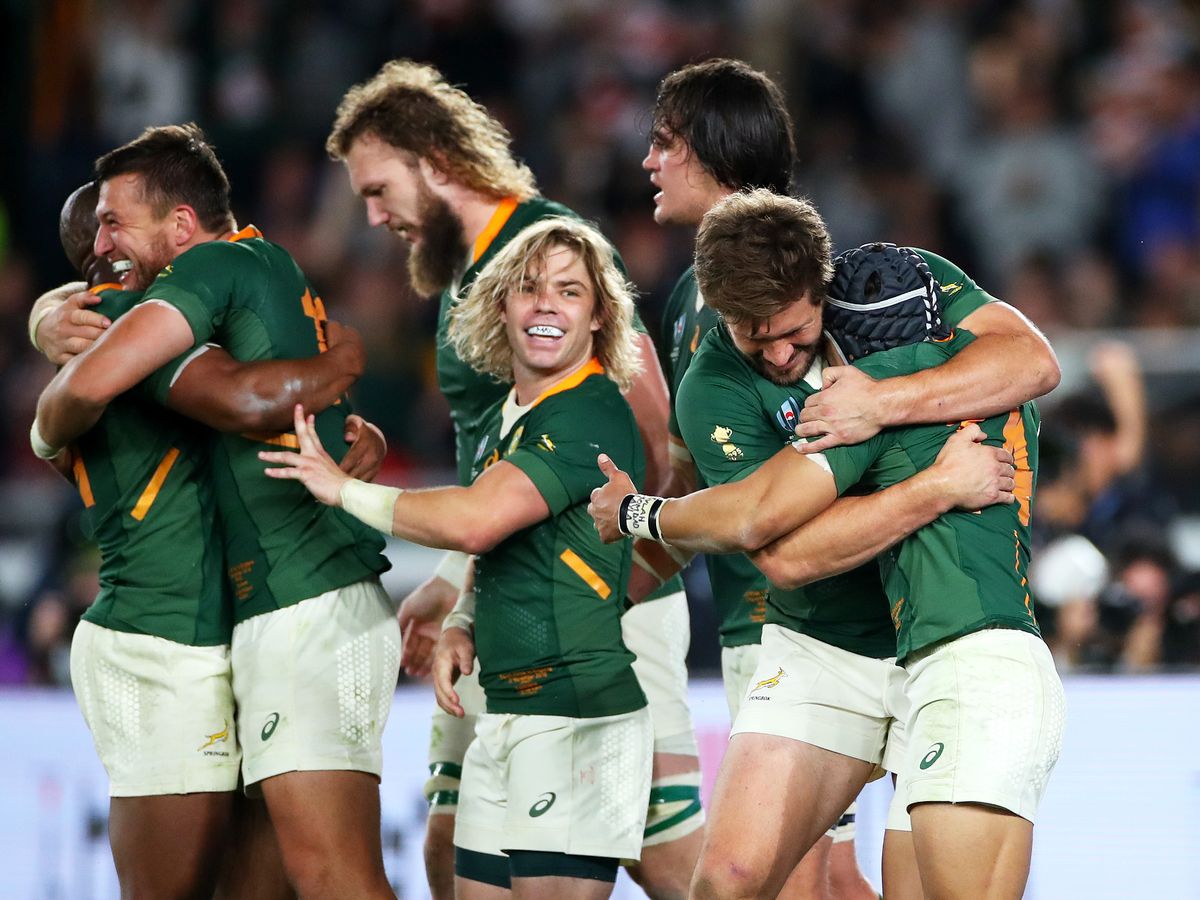 If lineouts are ultimately a shell game, then being able to successfully throw off the opponent from your jump target is a vital collective skill to have in your arsenal.

This is “feinting”. To understand the concept, we have to break down the lineout into a few of its basic tenets and the very first one is the Rule of Three.

The Rule of Three relates to the basic truth of most lineout jumps, on either side of the ball, in that you normally need three players to successfully get a player into the air – two lifters and one jumper. From an attacking perspective, you want to hide your “trio” until the very last minute and/or break up the oppositions “trio” with your pre-throw movement.

Now, if you have a dominant lifting and/or height advantage over your opposition, you might not need to go into much “deception” at all and when we look at the Springboks lineout schemes from the recent World Cup, we can see just that.

With four legit jumpers in their pack, a lot of whom are 6’8″+, and massively powerful lifters, the Springboks just didn’t have to bother much deception on their lineout schemes. Their lineout schemes had a philosophy of “try and get near us” and nobody could.

This is the simplest way to run any lineout, both from a jumping and throwing perspective. All of these lineouts run on a two or three-second timer and there’s no variance in the jumping position as far as the hooker is concerned. There’s no positions or feinting routes to memorise and it’s a simple lift/throw that you can drill to near perfection in training.

It’s a simple scheme but it’s based on the fact that every single player in the middle of the lineout is a potential jumper AND lifter. 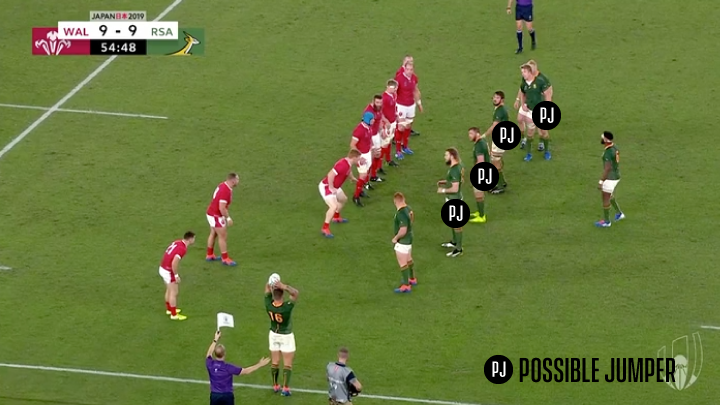 When we break it down into trios, you can see the confusion for Wales. There are EIGHT possible launch combinations here if we include Kolisi stepping in as a lifter as an option.

This the benefit of having four legitimate jumpers in your pack – you don’t really need to put too much artifice in your schemes because your array of jumping options are the artifice.

England had a different way of doing things with only two legit lineout options in their normal starting packs – and I went into detail on that here – but the main point in that there’s no one way to make your lineout work and it depends on the players at your disposal.

A lot of club and school sides might only have two jumpers – their second rows – and I’ve spoken to some school teams who’ve only had one player that they’d class as being a comfortable jumper. If this is the case with you, you need to come up with a few lineout schemes that disguise your lifts and breaks theirs.

The key to any good feint is to know what pictures you’re sending to the opposition. This means videoing your own lineouts in training and watching what your jumpers AND lifters look like when they’re about to lift. This is what your opposition sees on match day or, if they have the resources, what they’ve seen from you in previous games. What do your lifters look like when they’re about to lift? What do your jumpers look like pre-jump? Do they look exactly the same as when they are decoying?

If not, you’ve already got a problem.

The biggest issue I run into when I’m watching school video of training or match days is lifters and jumpers acting differently on the jumps where they’re “active”. It’s the first thing the opposition look for and it’s usually the prop lifters that are the worst culprits. The usual traits are lazy body positioning on decoy routes and pre-engaging on their actual lifts to save energy.

You’ll probably have seen this yourself in your own coaching efforts but the easiest way to get around it is by giving yourself a pre-lift shape that removes any space for lazy body shapes. Get your best front jumper and your two props and plant them at Two. 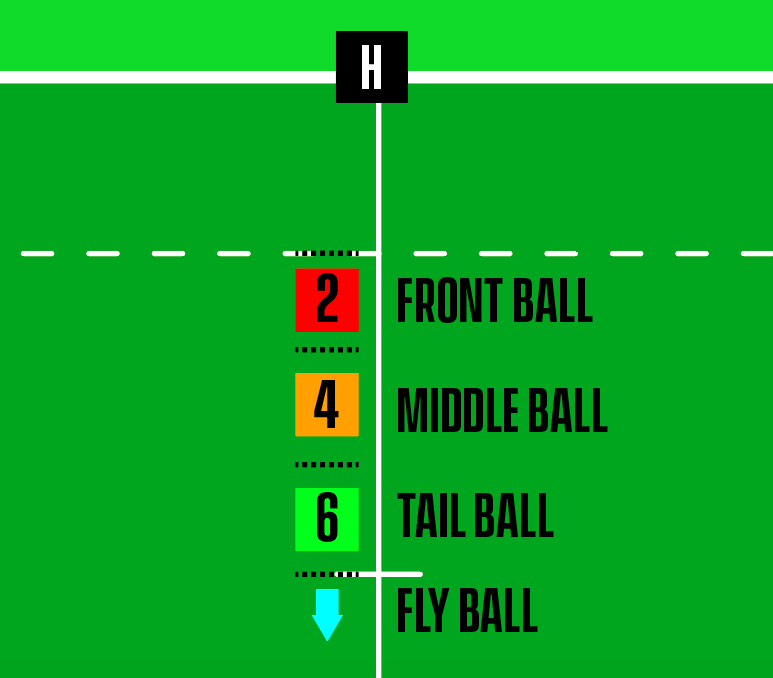 Have your jumper place both his arms over the shoulder of the front lifter, who will be set into his most comfortable lifting position. The jumper will be looking at the hooker. The back lifter will be in a crouched, hands-on knees body position facing towards the opposition lineout. His position – hands-on knees – has to be the same at the start of every lineout and he’s the key to our scheme.

From this simple building block, we can build an entire 5-man lineout scheme by adding our second-best jumper and our best back row lifter in a two-man pod behind them. 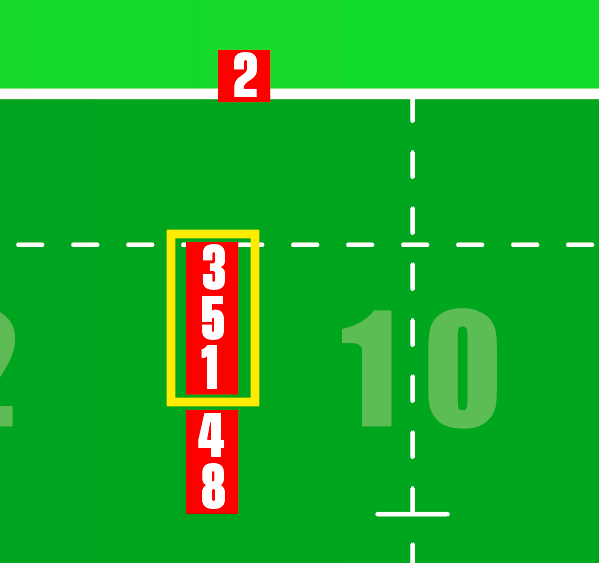 From here, we can launch a fast throw to Two Jumping Forward or Straight Up at Two on a two-second timing without any movement whatsoever. Our trio is already in place. This is when #1 is facing our jumper. You have to drill #1 going from passive (facing the opponent) to active (facing the jumper) as required by the caller and maximising his explosivity in the lift with the correct jump timing.

On a five-second timer, we can have our best jumper decoy jump out of Two and spin #1 around to lift #4 at Four. 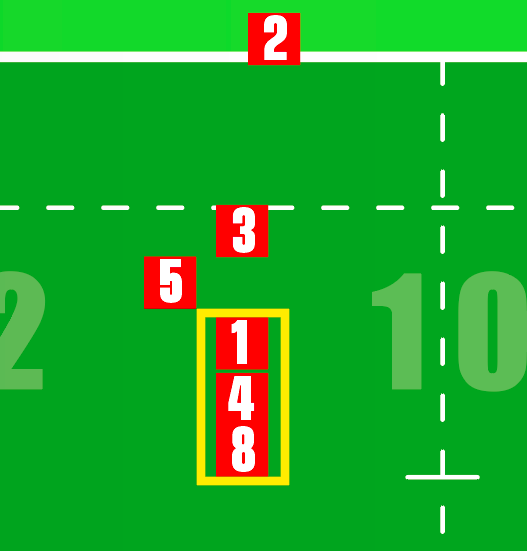 If the opponent goes pod-for-pod at the front, we have a good chance of isolating their two-man pod at the tail with this option.

If we want to get more complex, we can decoy jump at the front as before but also use #1 to decoy lift at Four while #3 shuttles back to lift #4 at Six on a six-second timer. 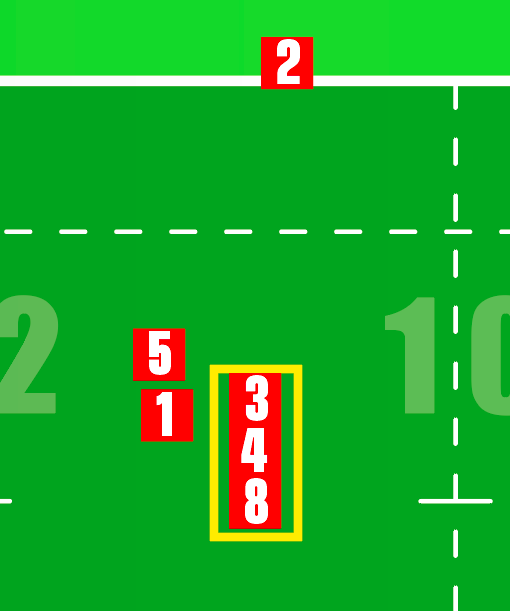 #1’s lift feint can just be a dip of the shoulders or a half squat before sliding out of the way of #3 as he runs onto #4. If it’s done right, you’ll get your second best jumper an uncontested launch onto the ball as the

Here’s a rough example of the movements I’m talking about from the cutout jump at Two to the lift feint.

In this GIF, I like how still John Ryan is at the tail of the lineout. He’s not giving anything away until the last second. Holland’s decoy lift route is pretty good but Ulster saw O’Mahony’s attack line a little earlier than I think we planned but our speed in the air and Carter’s separation from O’Connor on the lift gave us an edge.

If you’re feinting action is good enough, you can use the exact same scheme multiple times and target the same areas. Munster did this to excellent effect against Ulster this past weekend. Watch Peter O’Mahony and Jean Kleyn on these two lineouts.

The same feinting action each time sells O’Connor at Four so that Stander can jump uncontested at Six. The counter-pod at the back loses out clean both times in almost exactly the same way. It works because of the effective sell of the throw to Two by O’Mahony and Kleyn. 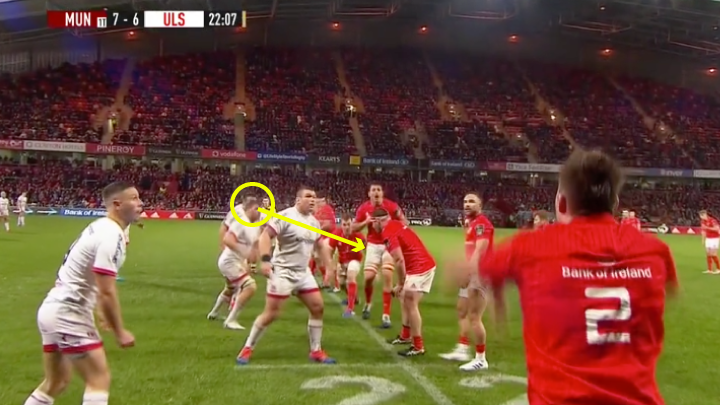 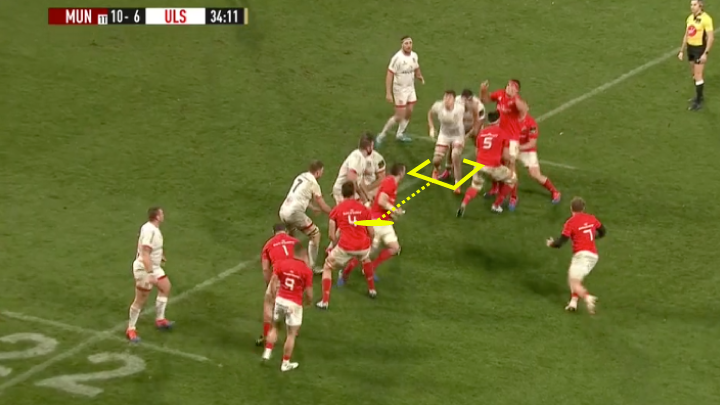 These movements draw Carter away from the trio at the tail to isolate their counter-launch. Stander gets a clean take at the tail on both throws. The scheme was exactly the same on both throws and it was made by decoys both times.

Your body position has to sell the launch as being real while holding your position in the grander scheme.

If you are accurate with your decoys, you can take any ball anywhere through the line.