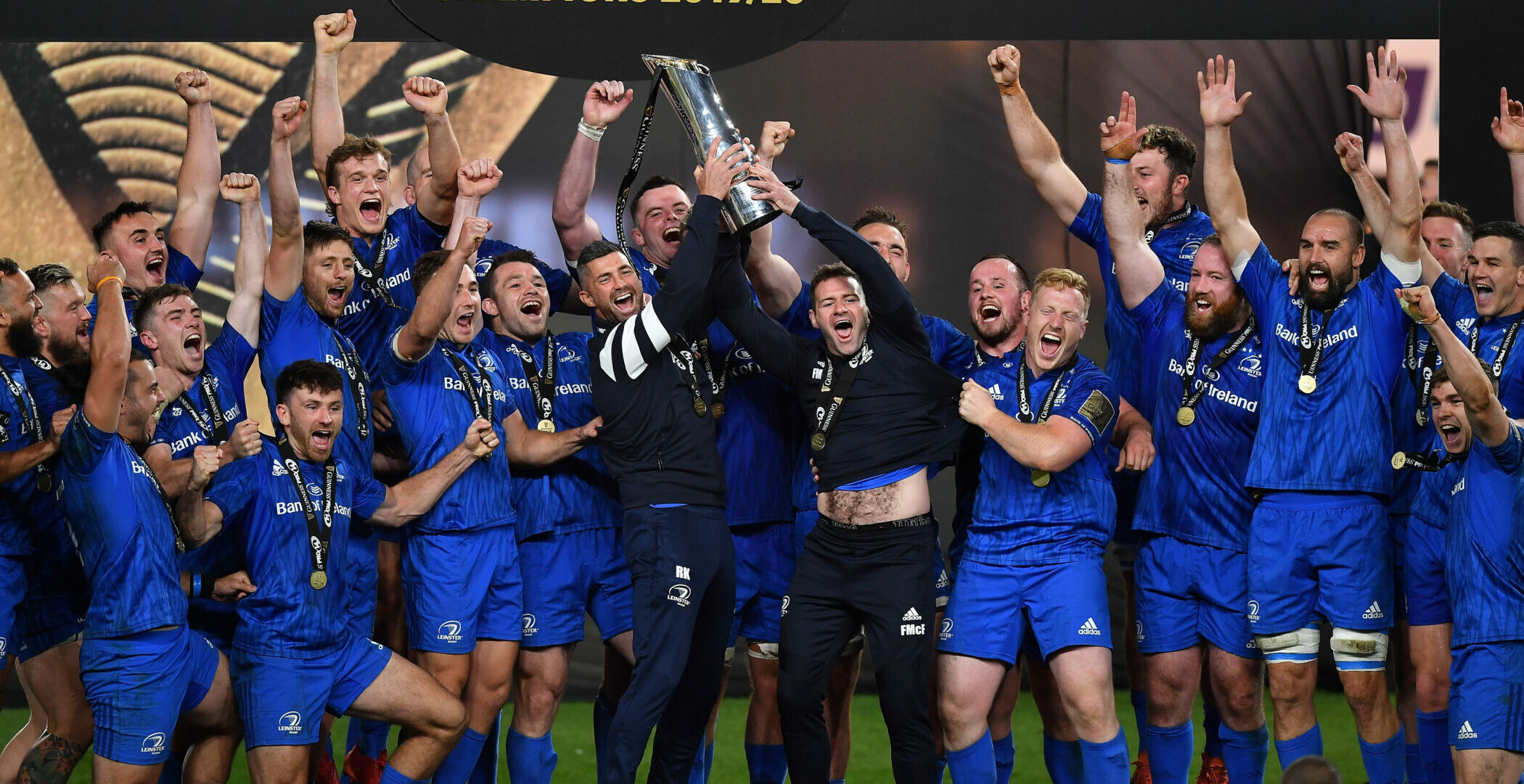 12 September 2020; Rob Kearney, left, and Fergus McFadden, right, of Leinster lift the PRO14 trophy alongside their team-mates after the Guinness PRO14 Final match between Leinster and Ulster at the Aviva Stadium in Dublin. Photo by Brendan Moran/Sportsfile

The Big East wins another PRO14 title against a game Ulster side.

By Tom Savage5 min read
Has there ever been a more worthy PRO14 champion than Leinster rugby this season? Leinster played 17 games, won 17 times and comfortably defeated a game Ulster side in Saturday’s final. Ulster showed up to play but, like Munster last week, they’ll come away feeling that they left something behind them. If anything, this game showed that to beat a full-strength Leinster side you have to play test style rugby, minimise your mistakes and take your opportunities. Munster did two of the three and fell short by 10 points. Ulster did one of the three and lost by 22.

What do I mean by test rugby? In this context, it means limiting the opposition by consistently playing to where they are relatively week to build pressure on their possessions and force mistakes. Since the restart, Leinster have shown consistently that they have issues under the high ball and even when they retain possession they have issues generating workable momentum in the first three or four phases after a kick retention.

Munster’s tactics were built around this principle in the absence of three of our four key forward ball carriers. We didn’t have the weapons to threaten Leinster’s heavy centre-field defence so we box kicked to generate favourable scenarios where we could either retain the ball directly or, in lieu of that, pressure their kick receipt, attack their narrow phase play structures with jackals and force a kickback.

Ulster found the same scenarios in-game and, crucially, had key ball carriers like Coetzee, Henderson, O’Toole and McCloskey in their starting XV and had guys like Reidy, Rea and Hume carrying effectively too. My problem is that they went away from what worked and played into Leinster’s hands.

Kick To Contain and Retain

This is a good example of the principle on an early box kick from Mathewson towards Keenan and Larmour with Stockdale contesting.

It’s an early error from Larmour with Keenan lost under pressure. Brace adjudged this as going backwards off an Ulster hand so Leinster retained the ball but their reset phase directly afterwards was sloppy and poorly resourced.

Conan knocked the ball on under pressure and from the resulting turnover transition, Ulster scored their first try of the game.

Later in the half, Mathewson launched a box kick onto Keenan and Stockdale won an aerial contest directly for a big territorial gain.

Keenan didn’t do a whole lot wrong here but he was just outsized by a bigger, more dynamic athlete in Stockdale. From the resulting territory and phase play against an unsettled Leinster defence, Ulster won a penalty for Conan not rolling away in a central position that drove them to the Leinster 22.

When Ulster spilt the ball after a few decent phases, Ulster bought a poor kick exit from Lowe that exposed Leinster’s kick transition defence when Mathewson attacked Porter and Healy after an excellent Stockdale run back.

Keenan showed consistent weakness under the high ball that benefited Ulster from directly when they kicked at him.

This botched kick receipt by Lowe under pressure by Lyttle lead to an Ulster penalty a few phases later as they pressured the Leinster defence.

That penalty should have made it 10-8 but Ulster forgot they were meant to be playing test match rugby and coughed up another kick at goal a few minutes later.

Even when Leinster retained the ball on the box kicks, they struggled to get any kind of purchase against the Ulster kick transition defence. This box kick receipt didn’t get the distance Mathewson would have wanted but Leinster made less than 10m on 10 phases after the kick receipt.

This sequence ended with Toner losing a big collision and Byrne kicking out on the full under pressure. A few minutes later, Ulster box kicked to Lowe around the halfway line and, despite retaining the ball, Leinster only made 6m on a few reset phases before using Byrne to kick back to Ulster.

Lowry made an error, for me, when he took this ball and chose not to call the mark, especially when Leinster’s lineout was wobbling badly in the first half. 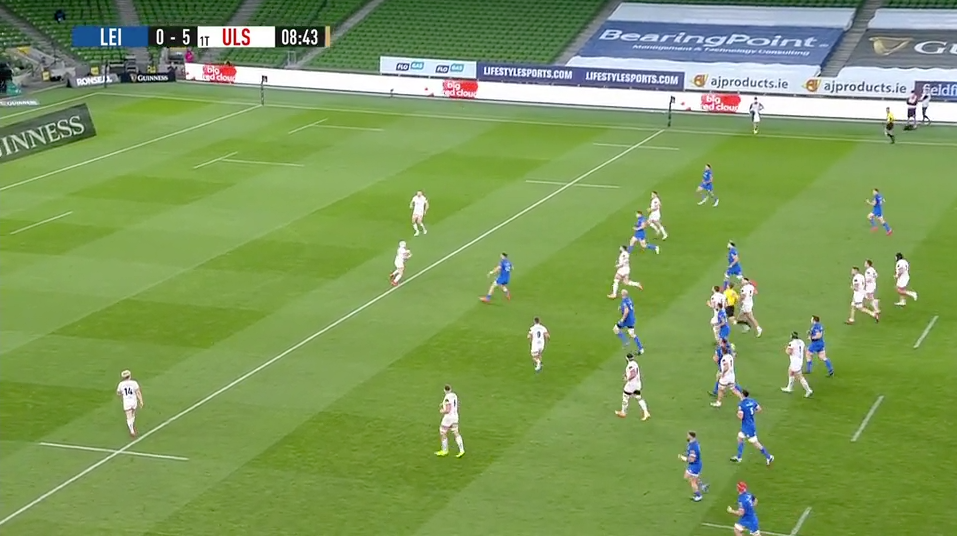 When Ulster box-kicked to Leinster, they forced Leinster into multiple turnovers under the high ball and into offensive sets where they burned ball carriers for minimal gains as the clock chewed down. They forced Leinster to play where they were uncomfortable and earned territory, field position and penalties.

If it wasn’t for crucial, heart kicking unforced errors – like this pass from Burns with a spatial overlap outside Hume…

… and a few three-point opportunities not taken, Ulster could have gone into the break ahead, rather than chewing their fist being five points behind.

In the first half, Ulster box kicked seven times to mostly positive results. In the second half, they went away from that in the third quarter and lost the game.

This kick exit from Burns off #10 in the first few minutes after the break was a break from what worked. Instead of fumbling around under a high ball, he’s got time to take the ball with no pressure and then do what he’s best at – run the ball back.

He earns Leinster a bit of momentum and Sean Reidy handed them a penalty for taking the man off the ball a few phases later. 13-5.

Ulster earned a lineout just inside their half straight from the restart and went into a launch pattern that looked like it was generating momentum but it actually wasn’t. This is a long GIF but watch it all the way up to the intercept. Watch how Leinster do not compete at the breakdown.

Ulster are carrying the ball for dead phases here. They do not realise that the momentum has left their attack and Leinster in a dominant position. This is an example of Leinster’s wide openside defence from last week’s game. 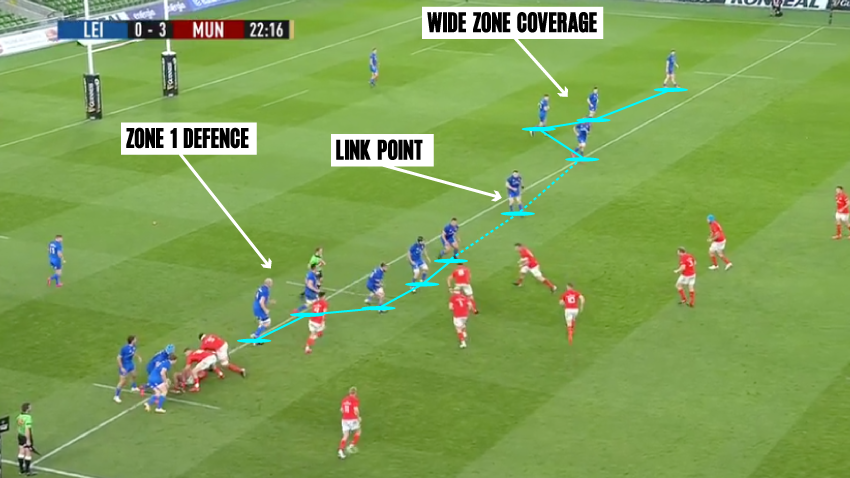 Look at the tight Zone 1 Defence off the ruck, Healy as the link point defender and then a Wide Zone Coverage that discourages any wide-wide play from this point.

Now, look at this moment right before the intercept. 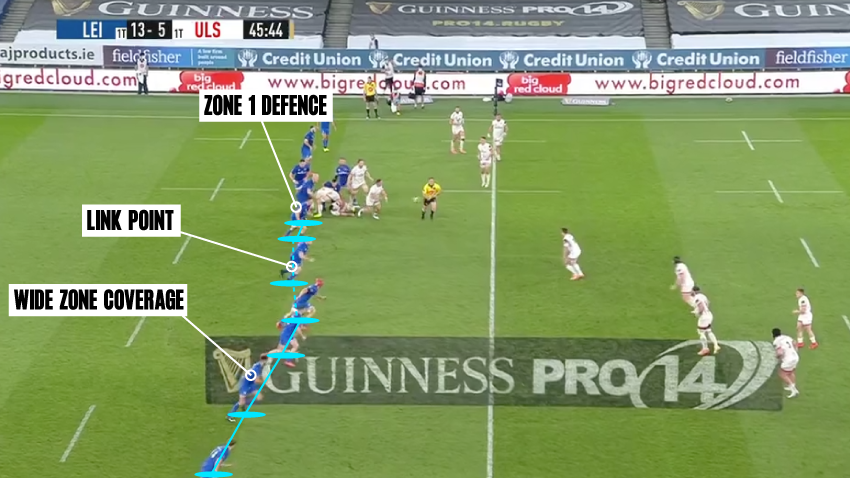 Cian Healy is the link point that has to be attacked. Leinster have packed the Wide Zone Coverage and Ulster are looking to play the ball to that position without anything compressing the Zone 1 Defenders. That leaves the threat of Coetzee in midfield to pull the Leinster defence out of position. It works for a brief window of opportunity but Burns picks the expansive option rather than the sensible ball. 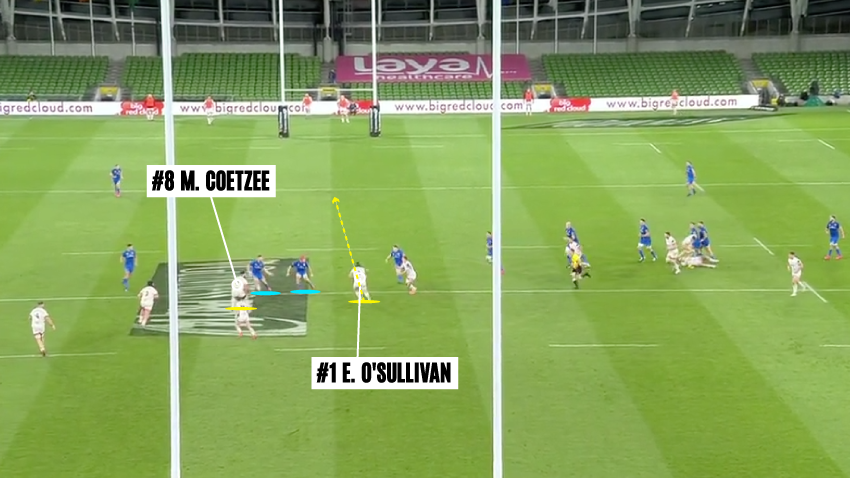 Coetzee has drawn in Van Der Flier and Henshaw but Burns lets them off the hook by looking for the wrong man. Instead of a big Ulster linebreak, it’s a killer try for Leinster and game well and truly over.

13-5 is manageable. 20-5 is not. I think McFarland knew it too because Coetzee and Henderson departed as the conversion sailed over.

The game was there for Ulster to win if they built pressure and hurt Leinster where it actually hurts, rather than where they would like it to hurt. As for Leinster, they will be happy to win another trophy pulling up without ever really reaching the heights that they’re capable of since the restart. That’s how good they are. You won’t beat them by playing the rugby everyone else wants you play. You’ll beat them by pressurising them where they are weak and taking every chance they give you off the tee or during the brief window’s of opportunity they show you during phase play.