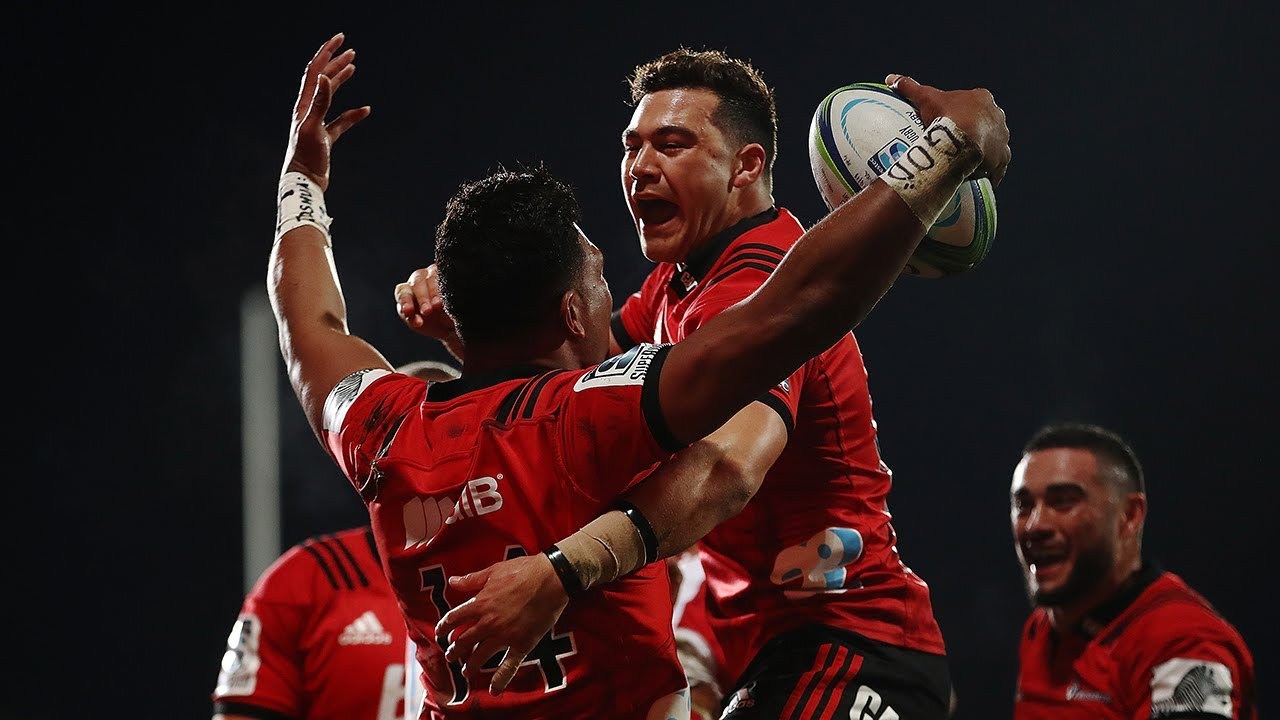 There are few things in the game more existentially terrifying than Malcolm Marx holding a ball at the back of a moving maul.

Whether it’s for the Springboks or the Lions, it’s a facet of the game you ignore at your peril. The Lions use their driving maul to excellent effect and regularly generate metres, penalties and tries.

This example from the Lions semi-final win against the Waratahs is an excellent example. 14 points down and 11 minutes in, the Lions take the Waratahs for a near 25m backwards stroll in a moment that was a real turning point in this semi-final.

A few minutes later, the Lions would barge into the lead off the back of another driving maul;

This maul was particularly brutal on the Waratahs – they had absolutely nothing for the Lions on this defensive effort.

Once the Lions got their driving angle set, they powdered the Waratahs, even though the Canberra outfit got a decent initial counter shove in place. This body shape is important; 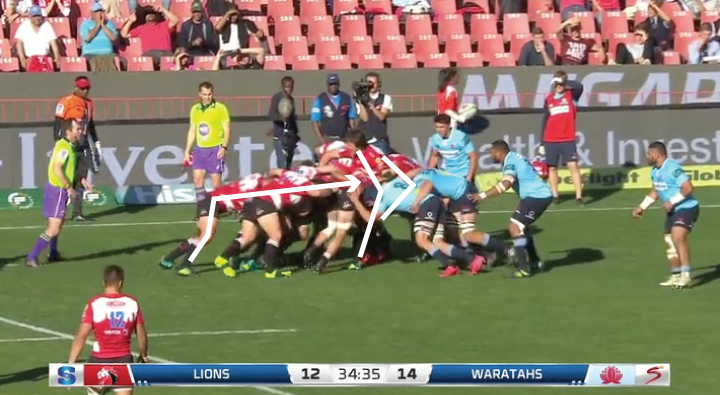 Mostert, Van Rooyen and Erasmus have got a deep lean into the Waratahs front defence, and the straight angle of the “drive section” of the Lions maul can push straight into that space. The Waratahs fall away under the pressure, and the Lions can jog over an 18m drive with a penalty advantage in their back pocket.

The initial counter shove helped the Lions get set, because it didn’t stand up the front of their maul and, once it got going, there was no stopping out. Let’s not write off the fairly average set up of the Waratahs maul d though – they lost four players from the initial surge to essentially make this a 7 on 2 once it got moving. 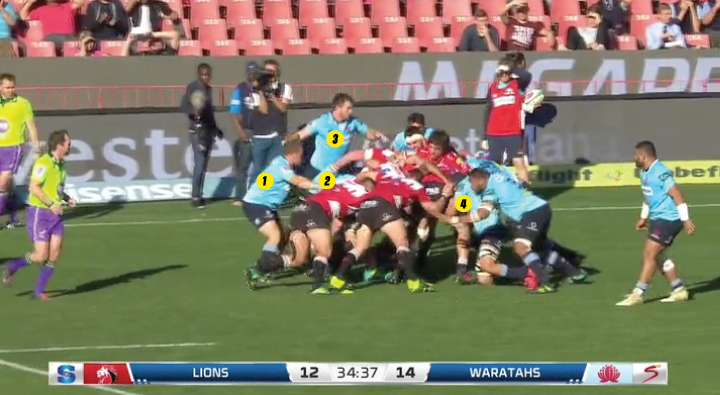 The instructions to take from this display was fairly clear – don’t give the Lions too many opportunities to get their maul going and, when you have to defend them, stop them early by any means necessary. If you can’t do either of these things, get used to watching Malcolm Marx bully past you.

That was the task waiting for the Crusaders this week.

First things first – the Crusaders would have to deny the Lions easy access to their driving maul. That means denying them easy exit ball. Given the Lions maul from almost anywhere – and have the ability to double up on their territory by earning maul penalties – you have to deny giving them a platform in the first place.

The Crusaders did this by avoiding kicking to touch, even when they had a free exit to do so.

The Crusaders’ halfbacks could have exited straight to touch in all of these instances but chose to bang the ball down field on a chase. The risk of giving up a kick transition was preferable to defending multiple long-range maul defensive sets as far as the Crusaders were concerned. But even with this tactic, they would have to defend the Lions maul at some stage.

In between mauls, the Lions had a few useful schemes for generating good field position and multiple ball-carrying options.

Have a look at this pattern, used twice;

Both of these schemes work on the same principle – you get quick ball off the top, hit the ball up at the tail with a tight pod of ruck support options while your lineout forwards sprint around the corner. 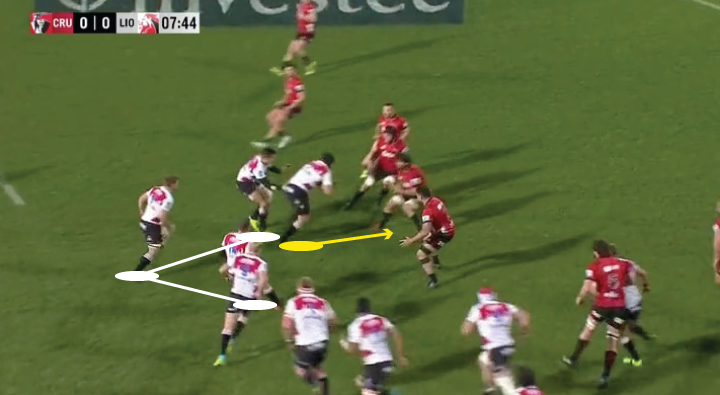 This tight pod catches the back of the Crusader lineout defence and engages them in defensive action. In the above snapshot, you can see four Crusader defenders tightened on Brink’s carry. The three support options all but guarantee a recycle while the Lions lineout moves around the corner.

From there, a midfielder – Mapoe in both instances – runs a hard line from the outside of the forward pod directly across the Crusaders tackle routes. 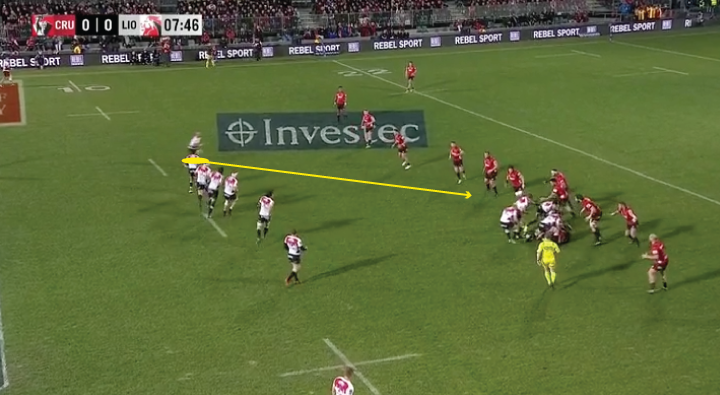 This is to compress the Crusaders even further and run the very limit of what might be considered crossing and/or obstruction. 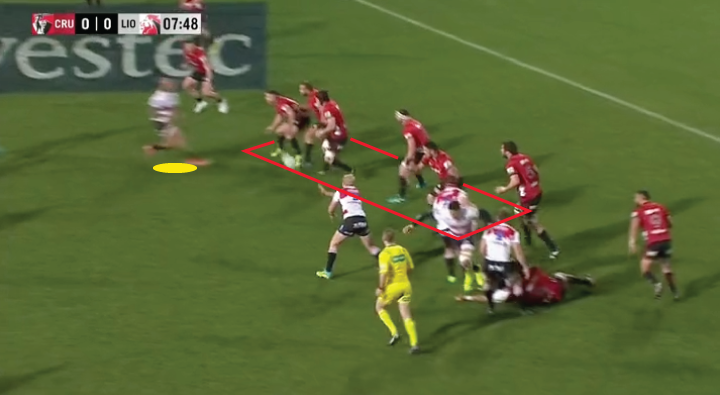 Ideally, this would create some space for the Lions to attack with around the corner but in both instances, excellent wide defence prevented quick ball from being generated.

That’s when the Lions went to their second structure off the first two phases post-lineout; 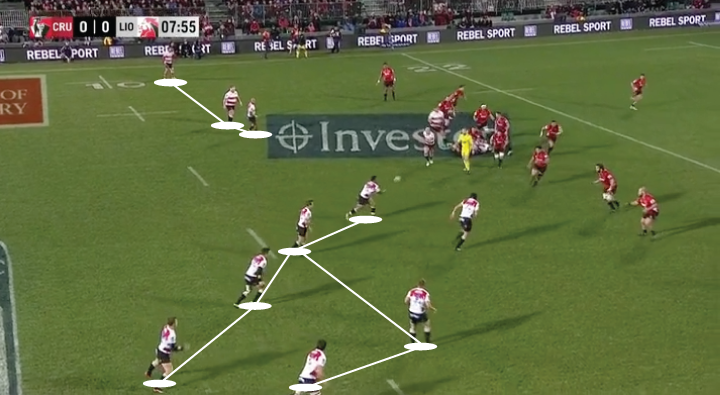 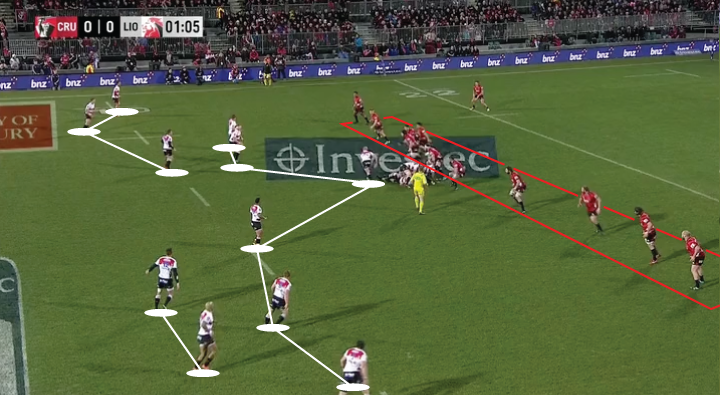 They have options left and right off the last ruck, and the halfbacks pick the best option based on the picture in front of them – mainly the width and alignment of the Crusaders defensive line, and the way the attacking line has settled around the corner.

Once the Lions had earned a penalty advantage, defending a maul inside the 22 became an inevitability for the Crusaders.

Their initial tactic for defending these potential mauls was to use their excellent defensive jumpers to disrupt the Lions in the air, pre-maul setup.

On this lineout – prime Lions attack territory – the Crusaders were prepared to attack the ball wherever it went.

The Lions have three pods in a rough position here. Brink and Whitely are tail options, Mostert is walking in as a possible middle option with Orie at the front. The two key lifters on each side are Moody and Smith. Moody is the bridging option between Whitelock at the tail and the middle – he’ll have to watch the space in front of Mostert for any movement of three. Smith is a perfect double bluff lifter. His relative small size makes him an intriguing presence in this lineout scheme – is he a lifter, a jumper, or a decoy on both?

Once Mostert and Brink move for the space, Moody can hold his position for Whitelock to counter-attack Mostert, while Read goes up at the front to pressure Marx’s throw.

The Crusaders get an important early turnover.

Why did Read go up? One of the supposed weaknesses in Marx’s game is the shape of his throwing – it makes sense that the Crusaders would want to challenge his skill set with two jumpers, especially when they know that this is prime Lions mauling territory and that they tend to maul from the middle of the lineout at this point in the 22.

But what about closer in? 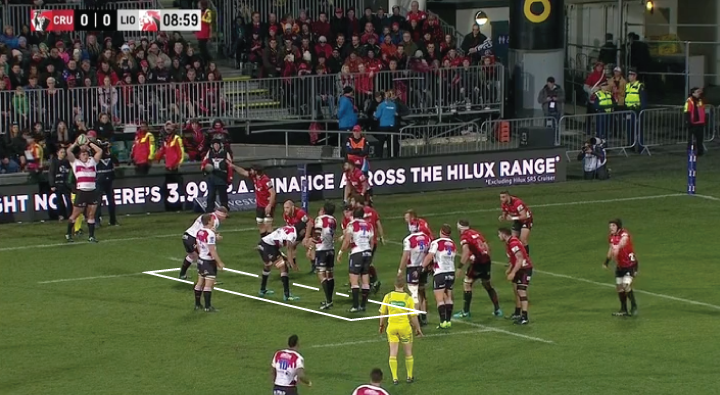 When the Lions go to Orie at the front, the Crusaders have one big moment to win – the race to the first shove. The cardinal rule of mauling from the front is that you have to win the battle for space and time – get up, claim the ball, get down quickly, boss the space against the counter shove.

The Crusaders, in my opinion, time their shove perfectly under Orie here.

It’s enough to critically undermine the Lions maul set up before it even starts.

Let’s see how it plays out;

A dominant defensive maul set. You can see the value of getting under Orie here;

By getting under Orie’s arse, the Crusaders unified four-man counter shove takes away his ability to lean into their shove, which takes him and his lifters out of the equation and into weak body positions. Throw in Barrett dragging Orie out by the leg – two penalty worthy offences in my opinion – and you have a recipe for the dominance shown by the Crusaders here.

This early defensive set showed the Crusaders what they could and could not expect to get away with on these close range defensive sets.

The Lions would go back to the front on their next entry to the Crusader 5m line;

The result is exactly the same – a dominant initial counter shove to send the Lions back. The South African franchise would win a penalty straight after this for a collapsed breakaway maul, but this was another shove based on the Crusaders’ timing.

Look at how they keep Orie and Mostert upright while driving straight through with flat back strength; 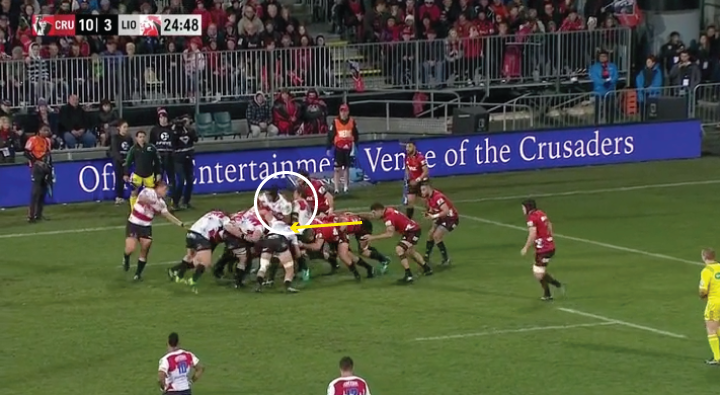 The Crusaders never competed in the air near the 5m line and made sure to get a unified, low angle four-man counter shove under the front jumper at all times. That prevented the Lions from leaning into their shove because the Crusaders took the space dominantly.

When the Lions tried to shift the maul, the forward pressure from the Crusaders blew through their ball transfer, kept the Lions upright and lead to dominant sacks.

The angle of the Crusaders’ defensive shove was a constant thorn in the Lions side, too. Look at the Crusaders infield shove on this close range maul;

The four-man shove lands right underneath the jumper and drives infield against weak Lions body positions.

Look at the way that Franks, Bedwell-Curtis and Taylor attack the side angle of the Lions set-up. 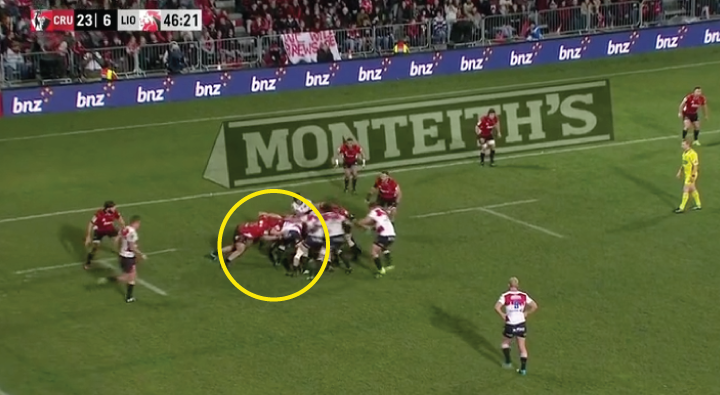 That puts the Lions into an inherently weak body position – just try to stop someone from pushing you over when they’re pushing from the side – and that allows the Crusaders to dominate the Lions infield and then catch them on the break.

The Crusaders prevented the Lions from getting a deep lean, and that in turn prevented them from getting the kind of set up that leads to Malcolm Marx rampaging forward off a maul. It was sophisticated, at the edge of the law (and beyond) at times, and relentlessly physical.

When the Crusaders took that weapon away, they were already half way to the title.