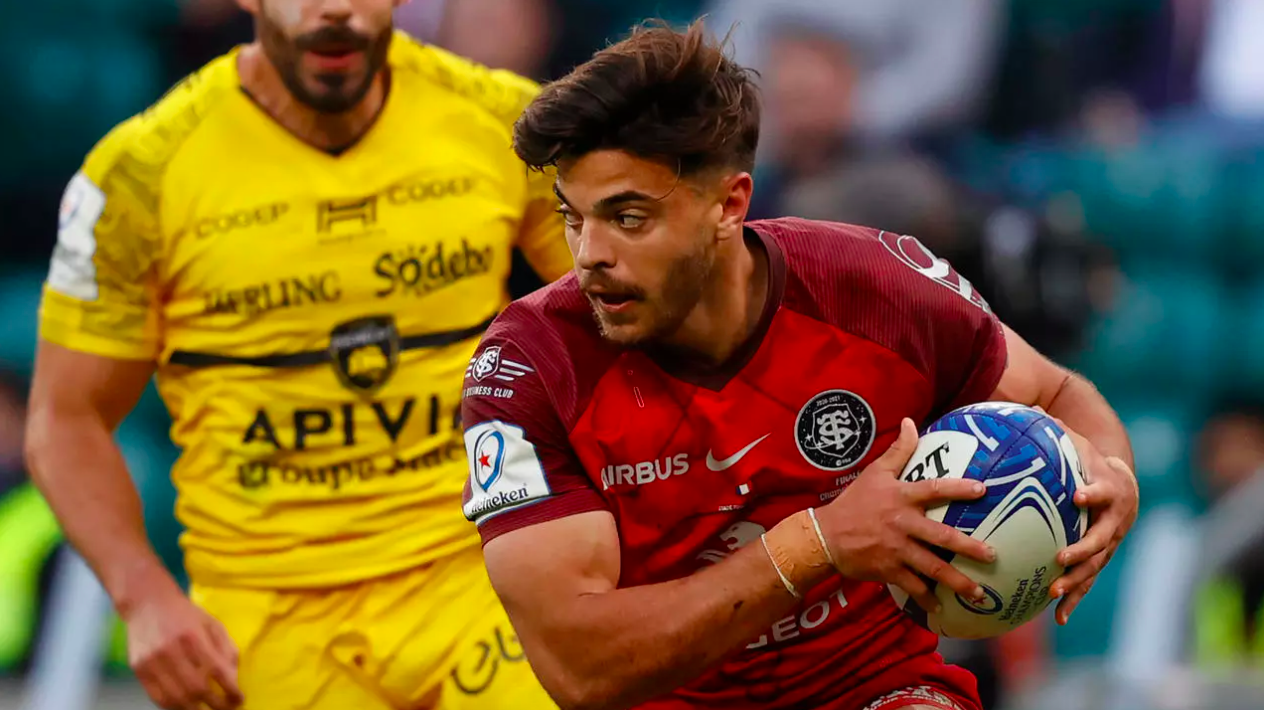 Sometimes things are more complicated than they seem.

By Tom Savage5 min read
During the Champions Cup final, midway through the second half, Toulouse had a scrum position on the post-left 15m line inside their own half against a 14 man La Rochelle, who were down a man in the outside backs after Botia’s first-half red card. Before the scrum set, BT Sport co-commentator Austin Healey spoke about what he felt was an obvious play option for Toulouse against the short-handed opposition midfield defence.

“You’re attacking against three defenders who will always have to drift and concede ground. They can’t come forward here, La Rochelle, so ✨all you’ve gotta do✨ is draw and pass – run straight – draw and pass, give the ball straight to Kolbe. Easy…”

Then, when that didn’t happen – Toulouse kicked the ball downfield looking for territory and counter-transition opportunities instead – Healey spent a minute or two after going over the options as he saw fit and lamented Ntamack’s decision not to go where he felt there was obvious space with the following.

“You do it time and time again as a ten-year-old kid.”

It might seem that referencing Austin Healy on here is low hanging fruit, to a degree, because he’s got the reputation of being a bit of an irritant in his media appearances but I’ve found his analysis to generally be quite good relative to the other in-game stuff we see in the modern game. It was his rhetorical use of, basically, you’re shown how to do X as a kid why aren’t you doing X in this elite level game that interested me because I tend to hear variations of this argument every other week during a match in my social media mentions and emails.

It sounds like a fundamental truth doesn’t it? Fix a defender, pass the ball, fix another defender and, voilà, the space must be there. In theory, yes, but there’s some handwaving inherent in this statement.

Fix a defender – did you actually fix the defender?

Pass the ball – did you pass it accurately?

And the space will be there – if you didn’t fix the defenders you thought you did or pass the ball accurately to facilitate the fixing, the space won’t be there.

My point is that sometimes what applies to ten-year-old children playing on a Sunday afternoon doesn’t always apply to the elite game, especially during set-piece attack. Why? Because of the quality and intellect behind top-level defences, even when a player down.

Let’s have a look at the scrum and subsequent play in question.

I’ll break this down into a framework later in the article but what is the context of this set piece? First, let’s look at position – this is inside the Toulouse 10m line so, just by default, this is the kind of ball you’d probably kick if it was regular phase play. Now look at the scoreboard – Toulouse are seven points up and we’re just after ticking over the 60-minute mark into the last “quarter” of the final. So Toulouse are up on the scoreboard, playing relatively deep in their territory and are closing in on the end-game of a major final. Do they even need to put this one through the hands? 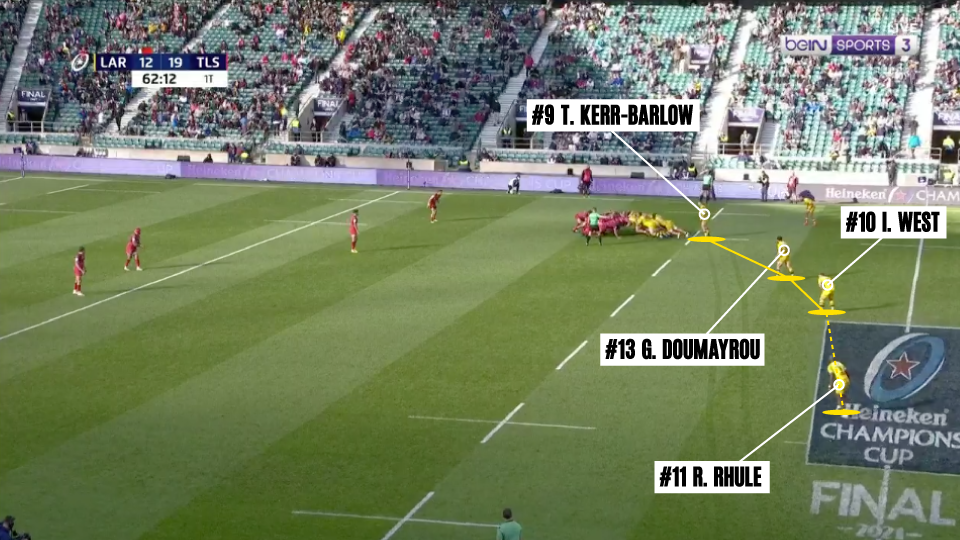 That gap between Ihaia West and Raymond Rhule is deliberate. It shows the space to Toulouse, almost like bait, because La Rochelle would be pretty comfortable with Toulouse attacking this channel. What Healey didn’t seem to understand is that “fix, pass, fix, pass, linebreak, try” only happens if La Rochelle are unaware of where they are short on numbers.

Rhule’s positioning – and that of the La Rochelle fullback Brice Dulin behind him, out of shot – shows that La Rochelle are acutely aware of where they are conceding space. 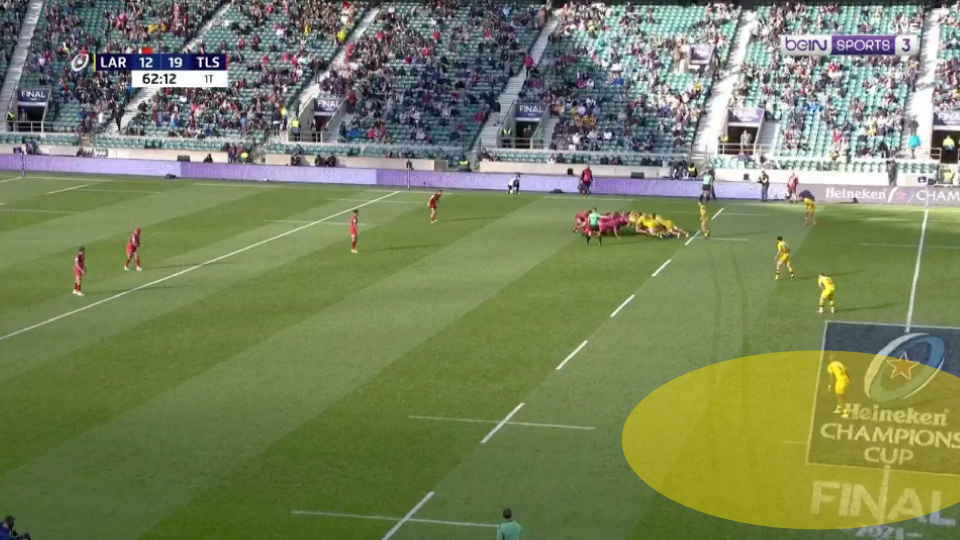 The narrow compression of West and Doumayrou almost dares Toulouse to go for that space. Raymond Rhule is really comfortable defending that wide expanse and can easily crunch in on West if Ntamack decide to hit narrow and, more importantly, track and trace wide if the ball comes across the pitch.

Rhule is positioned outside the Toulouse midfield so he can read and react with all the information possible, with the speed to go where the ball is. 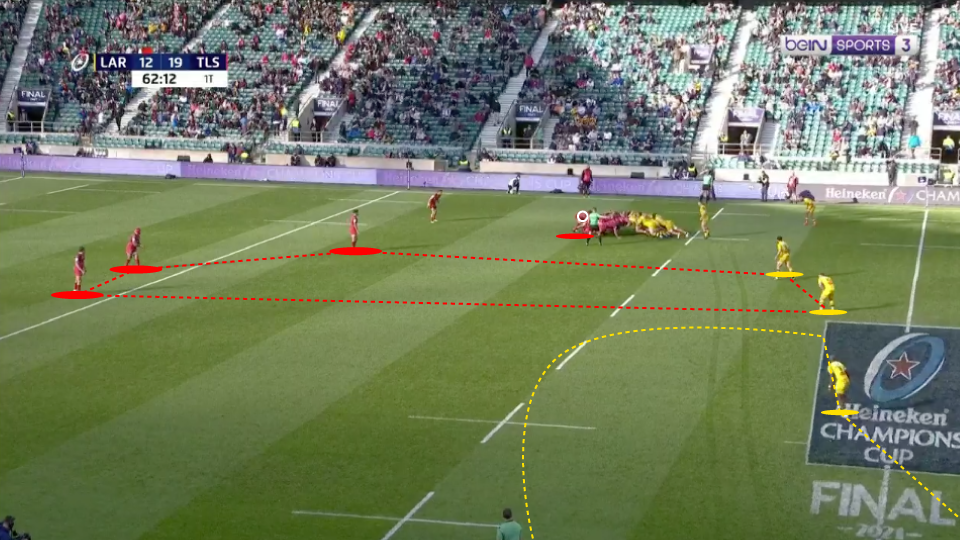 In reality, La Rochelle are far enough away from their own try-line that they can defend this relatively comfortably, even if Toulouse decided to play dumbass rugby and sling this wide-wide.

Liebenberg and Kerr-Barlow are always ready to break off the scrum to cover Ntamack, which opens up Doumayrou and West to slide across to the midfield with Rhule making his play based on the position of the ball. 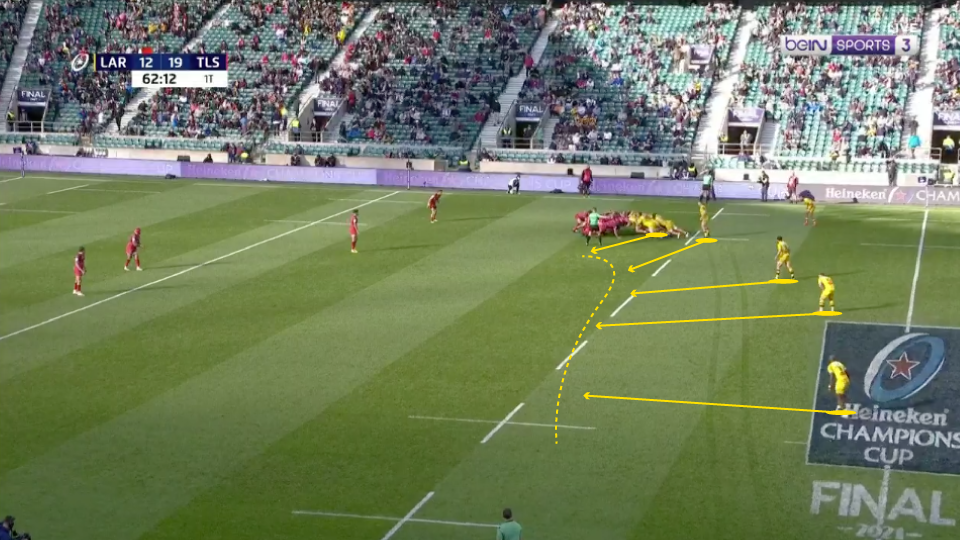 Dulin is right behind Rhule and, if necessary, can shoot up outside to take Kolbe if needs be – it’d be a tough tackle to make but you’d back Rhule to be in a position to help cover the inside ball to preserve a one on one in the wide-wide channel with West and Doumayrou tracking across too.

But if we look deeper, we can see even more complex reads are happening. Why, for example, does Dylan Lleyds not track Matthis Lebel as he breaks behind the scrum? 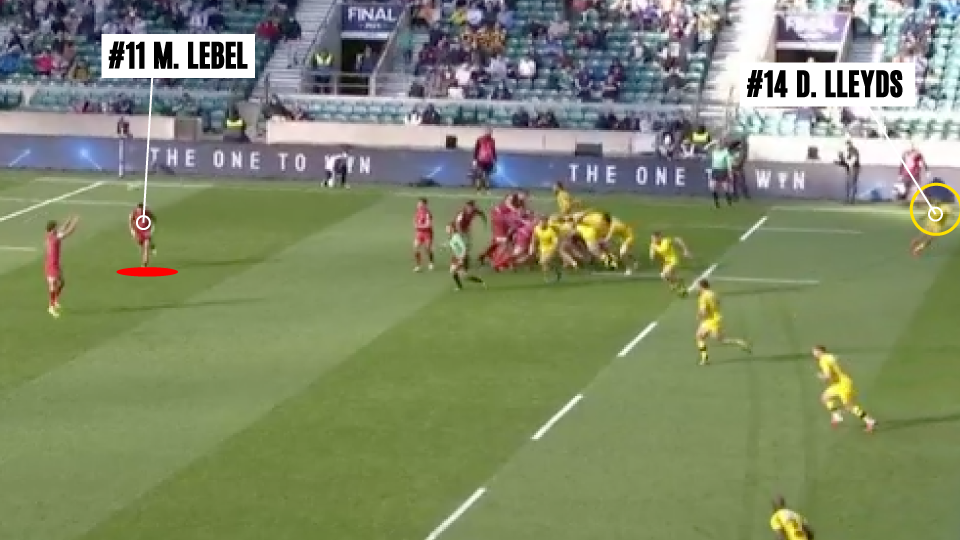 How does he know to head for the backfield before Ntamack has even kicked the ball, even with Lebel running a line that would, in theory, lead to a critical overload in the wider channels? Well, Lleyds knows the context of the position for Toulouse. He also knows that there is a lot of space directly behind him because of Dulin’s wide, deep cover behind Rhule due to the red card, so that’s in the back of his mind. Ntamack would love to get that ball bouncing in behind the La Rochelle cover.

Is Dupont’s poor pass to Ntamack the giveaway? Maybe – it’s a poor pass that Ntamack has to reshape to take – but, personally, I think the trigger that Lebel’s loop route is actually a decoy is Dupont’s actions after the pass. 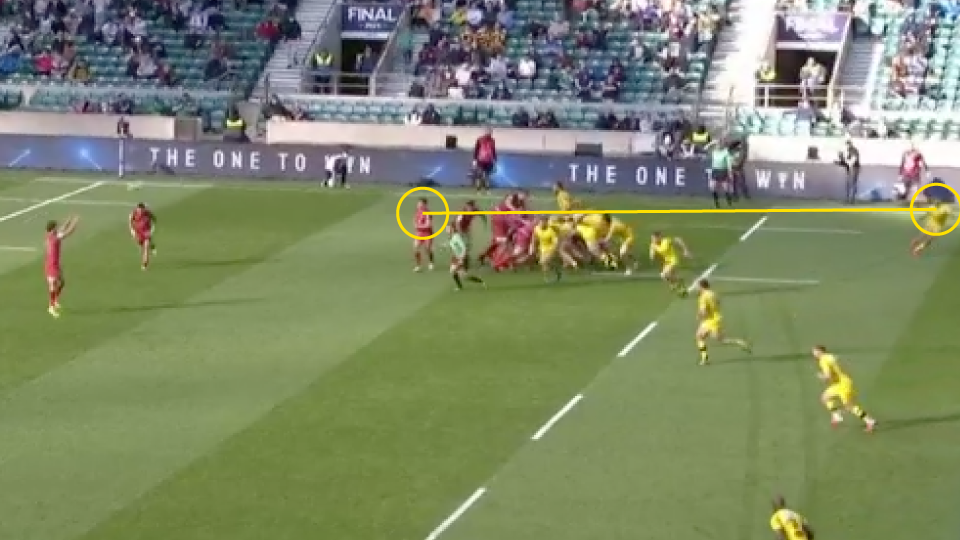 When Dupont just holds in place after the pass, as opposed to chasing the pass to give a looped handling option if Toulouse really wanted to overload the La Rochelle primary line, he loiters behind the scrum to form the transition return group and when Lleyds sees this, he breaks off to cover the kick in the backfield.

So, by understanding the context of the moment, understanding the scoreboard and playing with high IQ positioning and body language ID, La Rochelle were able to cover most eventualities, even with one of their midfielders red-carded. Toulouse, at the same time, were smart enough to not get suckered into dumbass, low percentage strike plays for the sake of “entertainment value” when they were already winning.

I wouldn’t expect your average ten-year-old to pick up this level of in-game theory pretty quickly. It’s easy to see space, it’s another thing to actually find it in a workable, logical way to helps you win the game, as opposed to highlight hunting.