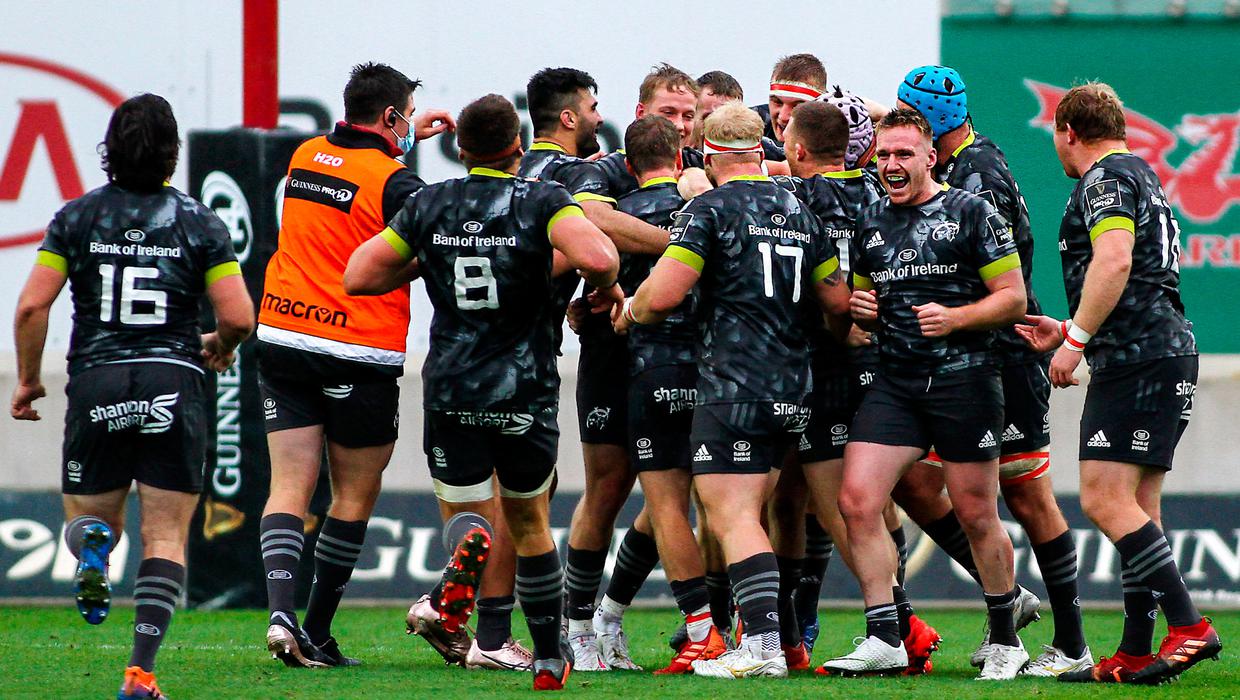 By Tom Savage6 min read
The simpler you can make your lineout, the better. It’s easier spoken about than it is to achieve because a simple lineout is a tall lineout. It doesn’t just have to be stacked with multiple, physically imposing, 6’5″+ jumpers – smaller, more explosive jumpers have a key role to play – but you need to have a core of three or, ideally, four highly effective lineout forwards to play this tall style effectively.

At its core, a tall lineout creates enough legitimate threats all the way through the line that you can more or less jump in place without the need for cut-outs, +1 step-ins, jump feints and long lifting routes. When Munster announced the signing of RG Snyman it made sense to assume that we’d would look to tweak our lineout style to allow for a simpler, taller set piece.

I’ve been over this before on TRK Premium but if I was to characterise our work at the lineout over the last two seasons, especially when we’re without Jean Kleyn in particular, I’d class our style as “small ball”.

We have a very recent example of this style from our last game against Leinster, where we had one of the worst lineout displays of the season. Without Snyman and Kleyn, we needed to play a more complex style to get our jumpers clean, uncontested launches.

This is a six-part decoy scheme designed to get Holland a clean take at the tail of the lineout.

This five-man scheme was designed to shake off the primary defensive counter-jumper – Toner – by overloading his front lifter – Doris – with multiple bits of information.

“Is O’Mahony launching at the two? Is Beirne going up at four? Can I track all those options and still match Toner’s backwards route to get my lift on him in time if Holland beats him into the air?”

This was a Munster response to the threat of Baird and Porter at the front and Toner’s reach in the middle and tail.

On a similar five-man structure a few minutes earlier, O’Mahony launched hard at two but the set up was mostly the same.

The starting position is the exact same and even has the same “look back” by Billy Holland before the trigger but look how close Baird gets on a one-man counter lift with Porter? This is the simple option on this play – it utilises O’Mahony’s speed into the air as the primary advantage – but Baird is close enough for Holland to use this structure as a bait and switch on the next throw which, as we know, was way, way more complex.

The more complex the lineout, the more there is to go wrong. The hooker has to wait longer on the line and get his throw timing spot on, the players running the routes have to be “clean” with their movement so as not to blow the scheme and one mistake is usually enough to end in a scrappy lineout win at best and a turnover at worst.

Against Leinster, with a smaller pack build (Beirne was the tallest player in the pack that day at 6’6″) we struggled to get reliable possession as we tried to shake off the Leinster counter-jump.

Without Kleyn and Snyman, we were forced to complicate our lineout to compensate for a lack of top-end size. Beirne (6’6″) was the tallest, followed by O’Mahony, O’Donoghue and Holland at 6’3″ with Stander an occasional utility jumper at 6’1″. Height isn’t everything when it comes to the lineout – I should make that clear – but there’s a difference in jumper profiles that is worth exploring when it comes to constructing a lineout. Big, Heavy Jumpers that are usually north of 6’6″ – Kleyn, Snyman, Toner, Kruis, Ryan, Etzebeth – exert a unique type of gravity in the lineout. They typically are lifted by two players but have the wingspan, power and weight to win and keep possession at the top of the jump and be a serious mauling threat on landing, which can be a powerful deterrent to counter-launches all on its own.

Then you have Power Jumpers – Beirne, Mostert, Wycherley, Baird, Coombes, Fardy, Itoje – who are usually between 6’4 and 6’7″. They don’t carry the same kind of KG as Heavy Jumpers but they can still be primary jumping outlets during a game. What they might lack in top-end height, they make up for in their increased speed over the ground and being quicker into the air than the Heavy Jumper. This gives them a wider range in the lineout from a positional standpoint.

You’ll usually try to have some Pace Jumpers in there too – they’re usually the lightest regular jumpers (most often they’re backrows) but they make up for that with increased speed into the air. Utility jumpers are the next classification and they’re usually back row players who don’t fit into any of the above classes while still being habitual jumpers (Curry, Stander, etc).

Not every player fits neatly into these categories (Jack Conan, for example, would be a Power Jumper with strong Heavy Jumper qualities) but I’ve used this system to identify the machinery of team’s lineouts for years. When you can classify the components of a lineout and assess who they tend to throw to during games, you can use that information to get the overall concept of their lineout schemes.

Leinster, for example, use Toner as a “counter-weight” in their lineout whenever he’s on the field. The opposition is naturally drawn to him so Leinster use “gravity” that to get clean takes for Fardy/Ryan/Doris/Conan.

Throw Kleyn in there, however, and you’ve got;

That kind of construction is enough for Munster to play with a “bigger” lineout scheme that can use simpler schemes. Look at these successful lineouts against Scarlets. Very little action before the throw, easy targets for the hooker and straightforward, simple maul builds.

The try to tie the game was built on simple, straightforward lineout schemes that set easy, powerful maul targets for the other forwards.

Look at how Coombes and Beirne’s lift on Wycherley allows our two props to latch in behind in power pushing positions, with Stander taking the ball on landing and immediately sliding back for a transfer to O’Byrne.

Look at how Coombes and Wycherley evolve during the maul. Coombes, in particular, has a huge influence on Ball and Davies as this progresses forward with the extra power added by the backs.

A relatively static jumping target allows Archer to get a pre-shove straight arm bind on Beirne which, as we know, gives you a big power boost when it comes to winning the crucial early maul engagements. 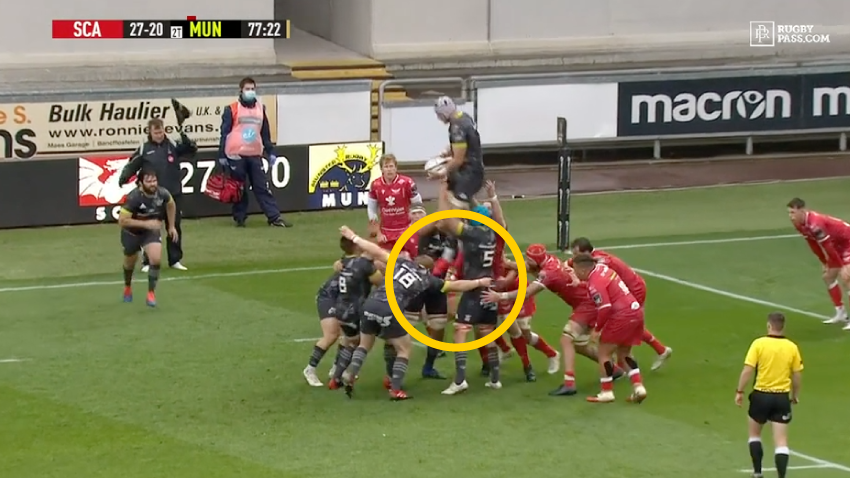 Blade Thomson is trying to respond in kind but he’s too passive in his bind (bent arm) and isolated from his counter shove to be as effective as he needs to be. Archer is in the perfect position to brace Beirne against the counter-shove and strike the maul hard on landing to get it moving.

That can’t happen without a simple, big lineout. When O’Mahony was in the bin in the first half, I felt we overcompensated for his absence with some overly complex calls.

This one was a blown throw that seemed to get it’s timing and trajectory wrong, in my opinion.

That said, it was a pretty complex three feint scheme.

This one used a similar core principle – Cronin running a lift route to the tail – but didn’t do enough to move Scarlets’ chief counter jumper Blade Thomson out of the way.

We retained the ball but that was down to chance.

When we played big, simple lineout ball, we retained better and mauled better. I think a future lineout build of Snyman (Heavy Jumper with Power Jumper qualities), Kleyn (Heavy Jumper), Beirne (Power Jumper with Pace Jumper qualities), O’Mahony (Pace Jumper) and Stander (Utility Jumper) with Coombes, Wycherley and others pushing hard for Category 1 opportunities will give us an even bigger platform to work with.