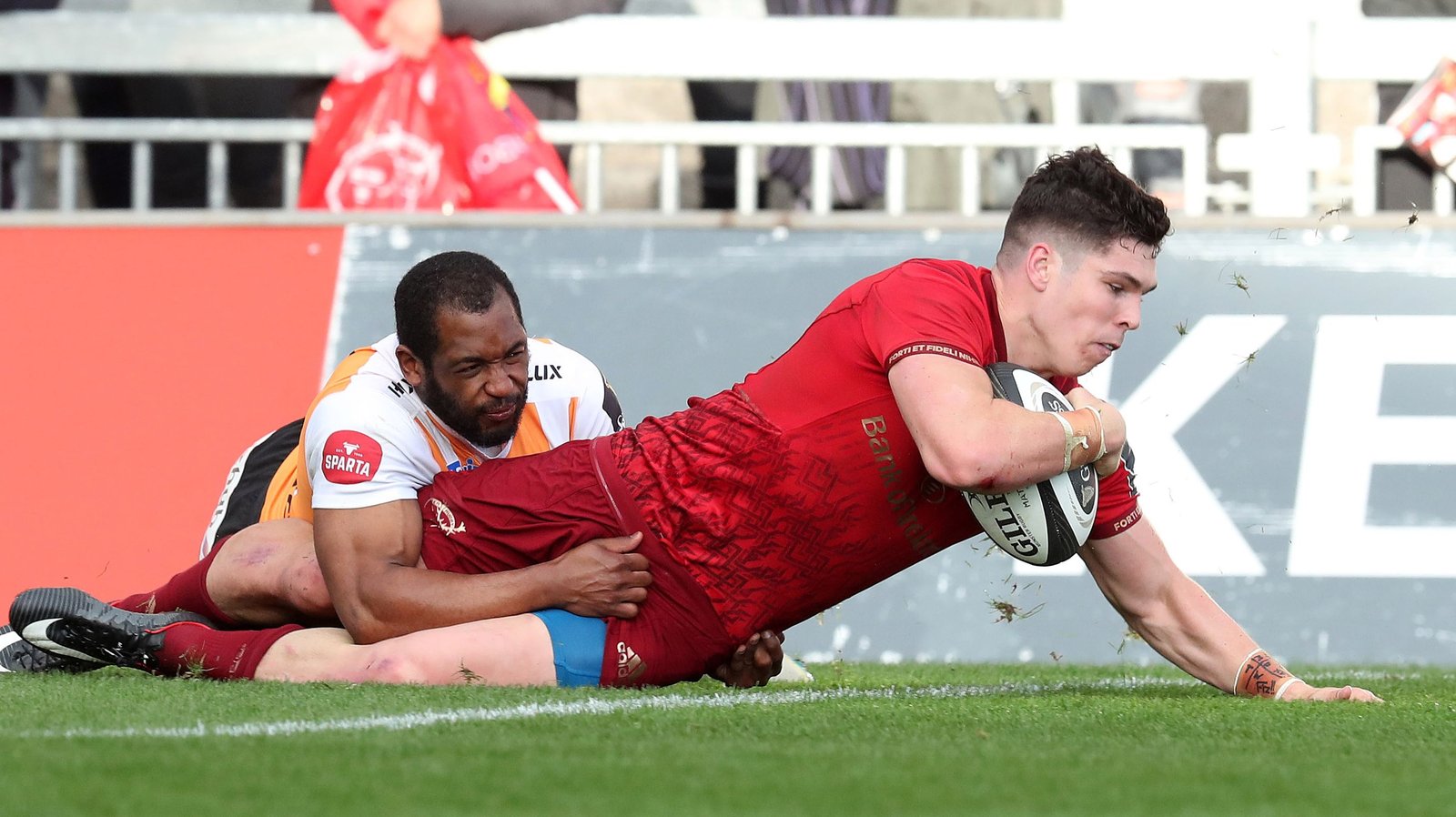 One thing is for certain; Alex Wootton is a guy going places.

Usually over the try line, it has to be said. It’s November, and Alex Wootton is still top of Munster’s try scoring charts after a scorching run at the start of the season that saw him score against Treviso in the opening game of the season and then torch the Cheetahs in Thomond Park the week after, scoring four tries and making the Munster Nation sit up and take notice.

That notice is well deserved. Alex Wootton is, like I said at the start of the season, one to watch for Munster. He hasn’t been involved in the last few weeks due to the needs of the Champions Cup (in build up and execution) but this week he lines out against the Dragons in Irish Independent Park. It’s been a good ground for him the last few times out – a B&I Cup win and a try against Benetton Rugby on the opening day – so he’ll be looking to repeat the winning trick this time around.

When he picked up the phone on Wednesday afternoon (and kindly reassured me that I hadn’t been that terrible in Thomond Park the week prior) we weren’t long getting down to what he found the most satisfying this season so far.

“Game time,” he said. “Obviously the four tries against the Cheetahs was good too but by far the main thing that was keeping me happy has been the game time. Obviously when Keith [Earls] game back from injury he was going to get game time leading into the Champions Cup but when it comes to selection, he’s pushing me and I’m pushing him.”

That’s what it’s like in the high competition environment that is Munster’s back three at the moment. Everyone pushing each other for those minutes.

Workings of the Back Three

Alex Wootton is a confident guy. You’d expect no less from a back three player with the pace, power and eye for the try line that Wootton has demonstrated in his time in a red shirt to date. But with those traits has been a real appetite for work.

I ask him about what he looks at when he’s coming in off the wing. Is it something he likes to do?

“Absolutely,” he says, “The system we have is based on offering yourself as much as possible. On the Monday, when we’re coming into look at the game, Felix [Jones] will bring us in looking at the 10, centres and back three and generally look at what went right, what went wrong and stuff like that. A lot of the time it’ll be focused on ‘well, you offered yourself well here’ and on the flip side, asking if you could have done more in a certain situation.

For me, I like coming in off the wing and getting into the tighter channels. I like to get in amongst it with the forwards rather than having to go around them all the time.”

That’s certainly true and one thing that stands out about Wootton having met the man last week was his size. He’s a powerfully built winger – 6’2″, coming up on 15½ stone – and he’s well capable of mixing it up all over the pitch.

“I love to come in off the wing,” he continues, “especially coming into the winter. It’s alright in September/October but coming into the winter months you just want to get your hands on the ball. If you’re not active on cold nights during a game, you can end up not being ready for the ball when it comes to you. You don’t want to wait for the game to come to you.”

From there, I had to ask about the expanded game plan that Munster have been bringing in this past season. How is he finding it? How are the squad adjusting?

“Well this preseason just gone there was a massive focus on our attack – way more than the defence. The biggest thing is developing combinations with the people you’re playing with but out on the pitch. The likes of Saracens and Toulon have those kind of experiences with each other on the pitch in big games. We got that last year with a semi-final and final. That’s what we need with the expanded game plan – to continue to bring it out onto the pitch. Everyone can do it in training, the key is to do it out on pitch.

The thing is, our attacking development isn’t just a simple upskilling – we have dimensions that we’re looking to tweak and adjust for different opposition.”

From there, we went onto kicking and how Munster, in general, are kicking way less this season to date. I ask Alex about this facet of the game; is the kicking game something he enjoys?

Obviously when an opportunity presents itself, we’ve got licence to make a decision to go for it in our own half if it’s on. Last year, we played a little differently and had more definitive instructions on certain types of ball and it was certainly successful – we got to a semi-final and final, you know?

You’ve got to develop a game and put your own twist on it, you know? It’s like I was saying earlier about developing that game with familiar combinations and players. That’s when you get the gold dust – when you know what the player outside you or inside you is going to do without thinking.”

We eventually move onto the upcoming Dragons game, with Alex starting on the wing in Cork, I ask him something I’ve always wanted to know – what’s it like running out in front of the Munster crowd?

“It’s really special. Irish Independent Park is different to Thomond Park in a lot of ways.

Thomond Park is a different beast. It’s hard to describe. I played there against the NZ Maori and it’s almost gladiatorial in the scale of it. That can make you feel twice the size you are because that Thomond Park stage is so big. Sometimes you get taken aback by it, almost.

There’s slightly different accents coming from the terraces in each stadium too!”

So with Dragons on the horizon, and with a lot of game time coming his way over the next few rounds and during the Six Nations, what are Alex Wootton’s aims?

“I want to play as well as I can and be there or thereabouts when it comes to selection for the big games. I want to push towards Ireland selection if I can.”

He means it too. He’s a guy who’s going to make sure he gives Johann Van Graan some decisions to make going forward.

Don’t bet against him.

Tickets are available here for the NON TELEVISED Munster vs Dragons game in the Pro14. If you want to see Alex Wootton and everyone else, get a ticket ASAP.